I have stated that while I don’t believe that the stock market has made its final cyclical top, we are in the late stages of a bull market (see Risks are rising, but THE TOP is still ahead and Nearing the terminal phase of this equity bull). Nevertheless, psychology is getting a little frothy, which represent the pre-condition for a major top. This is just another post in a series of “things you don’t see at market bottoms”. Past editions of this series include:

As a result, I am publishing another edition of “things you don’t see at market bottoms”.

This is roughly the time for investment strategists to write their outlook for next year. I called for a possible blow-off high in stocks early in the year, followed by a rocky second half (see 2018 Outlook: The Bulls’ Last Charge). By contrast, Street strategists had turned unabashed bullish for 2018. Two separate strategy teams separately and independently rationalized their bullishness as “rational exuberance”.

In addition, Bloomberg reported that “the average estimate of all the major brokerage firms predicts that stocks are expected to rise 10 percent next year”. Birinyi Associates found that the S&P 500 performs poorly when the average year ahead forecast calls for gains of over 10%:

Stock market research firm Birinyi Associates has tracked the predictions of Wall Street strategists back to 2001. The general conclusion, according to Birinyi’s director of research Jeff Rubin, is not to put too much faith in them. The stock market has plunged in years when analysts predicted it would go up a lot, and jumped in years when Wall Street strategists said it would go up only a little. (Strategists as a group rarely predict down years and haven’t since 2001.) But there is one pattern to look out for: Years in which Wall Street is looking for a double-digit return for the first time in a while. 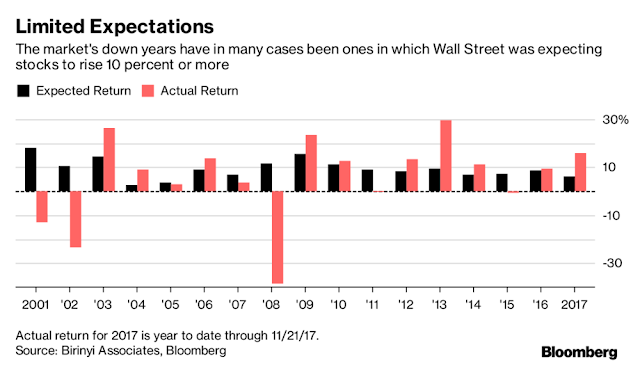 These results are consistent with the research conclusions of the BAML Buy Side Indicator, which is “based on the average recommended equity allocation of Wall Street strategists as of the last business day of each month”. When Street strategists become overly bullish, defined as the Sell Side Indicator rising to at least one standard deviation above its 4-year moving average, equity performance has tended to struggle. (Annotations are mine because the data has been updated since the original chart was produced.) 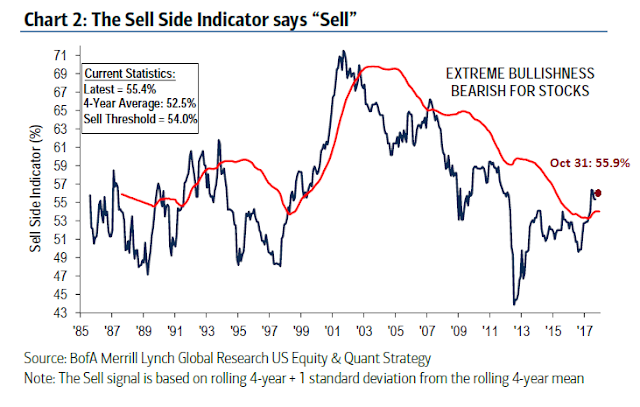 Please note that current Sell Side Indicator readings are roughly two-standard deviations above the average, which suggests even weaker equity returns ahead.

Would you pay a BBB borrower to take your money? Evidently, that has happened. What’s more, Business Wire reported that the deal was over four times oversubscribed.

The transaction was very positively welcomed by the investors, which led to an oversubscription ratio over 4. Thanks to this strong demand, Veolia managed to issue the bond with a spread against swap rate of 5 basis points, which is the tightest spread ever achieved for a 3-year fixed-rate EUR Corporate bond.

Thank you, European Central Bank for your QE programs.

Sometimes I find the most fascinating tidbits. David Swensen, the Chief Investment Officer of Yale University, stated in an interview that he found that short sales represent an important area of opportunity from a contrarian viewpoint. One sign occurred when Yale had to change its short-selling performance benchmark because the number of short selling managers was disappearing:

One of the obvious areas of opportunity in an environment of extended valuations is short something. Recently we had to change an index that we use to measure the returns of short sellers, because the index stopped being published because there weren’t enough managers to populate the—populate the index. So it’s incredibly out of favors. Short sellers have suffered enormously. And I think that’s an area of opportunity.

The art world was recently rocked by the auction sale of Leonardo da Vinci’s portrait of Christ, known as Salvator Mundi, for a record US$450 million. The chart below from SentimenTrader shows that, while these astounding prices don’t always pinpoint the exact market tops, the timing and the amount involved certainly raise eyebrows. 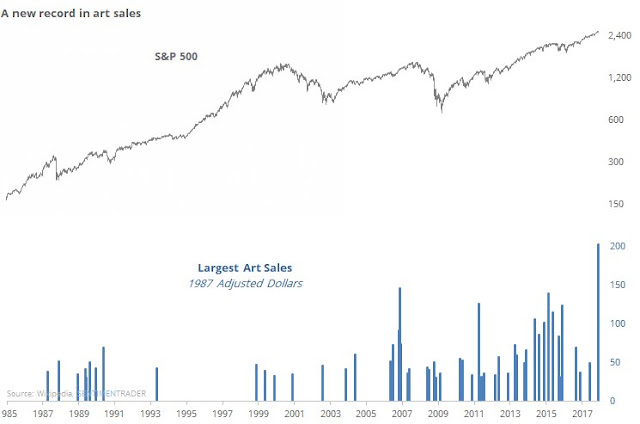 Crypto and Other Madness

Market lore tells the story of how Joe Kennedy got out of the stock market before the Crash of 1929 when a shoeshine boy started talking to him about stocks. Minneapolis Fed President Neel Kashkari’s tweet may be the modern equivalent for crypto-currencies.

This astonishing anecdote was followed by the Bloomberg story that survivalists, who had a propensity to hoard food, water and weapons to prepare for the Apocalypse, were turning from holding gold to Bitcoin as a store of wealth:

Across the North American countryside, preppers like McElroy are storing more and more of their wealth in invisible wallets in cyberspace instead of stockpiling gold bars and coins in their bunkers and basement safes.

They won’t be able to access their virtual cash the moment a catastrophe knocks out the power grid or the web, but that hasn’t dissuaded them. Even staunch survivalists are convinced bitcoin will endure economic collapse, global pandemic, climate change catastrophes and nuclear war.

“I consider bitcoin to be a currency on the same level as gold,” McElroy, who lives on the farm with her husband, said by email. “It allows individuals to become self-bankers. When I fully understood the concepts and their significance, bitcoin became a fascination.”

I could ask what these people are smoking, but I found this on Twitter.