What’s next for the tax cut bull? – Humble Student of the Markets

Mid-week market update: It was clear from yesterday’s market action that the equity bull depends entirely on the success of the Republican tax cut bill. The market rallied on the news that the tax cut bill had made it out of Senate Budget Committee. It manage to shrug off the news of a possible government shutdown, and a North Korean ICBM test, which was later determined to have a range to reach the entire Continental United States.

The combination of the market enthusiasm yesterday and the strength in the Goldman Sachs high tax basket indicates that the market is discounting the passage of the bill. 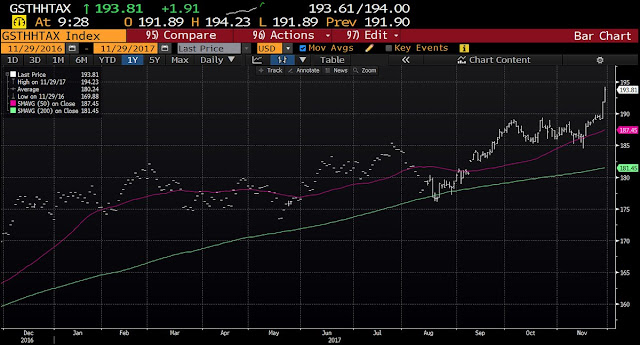 The Senate’s version of the bill now goes to the floor of the Senate. Here is where it is likely to run into trouble. Under the Byrd Rule, which states that Senate legislation on budget and spending can be passed with a simple majority without filibuster and then undergo the reconciliation process with House legislation, it needs to pass two tests. First, it cannot increase the deficit by more by $1.5 trillion over 10 years. As well, it cannot raise the deficit any more after the 10 year period. The determination of whether a bill passes those tests is done by the non-partisan Joint Committee on Taxation (JCT). Any budget legislation that is not Byrd Rule compliant is subject to filibuster and needs a 60 vote majority to pass the Senate.

The Republican Senate leadership is trying to bring the bill to a vote on the Senate floor this week, before the JCT has scored the bill. Notwithstanding all the bargaining that is going on right now to get the bill passed, the Washington Post reported that the JCT is rushing to produce a score, whose “optimistic estimate for completion of this analysis is late Wednesday”.

While we don’t have the JCT report yet, we have the results of other models. The analysis of the Penn-Wharton model, which is run by a former Bush administration official, found that “the Senate Tax Cuts and Jobs Act reduces federal tax revenue in both the short- and long-run relative to current policy”, or increase deficits after 10 years, even with dynamic scoring. That doesn’t sound Byrd Rule compliant to me. It’s hard to see how the JCT analysis would come to a significantly different conclusion.

What about the effects of Bob Corker’s proposed “trigger tax”, where tax rates rise if growth does not hit projected targets and the deficit rises? Would that solve the Byrd Rule problem?

Here is what former Reagan budget director David Stockman had to say about writing and implementing a “trigger tax” provision:

The problem is, what is the baseline for measuring any revenue shortfall, and what happens if the short-fall is due to a recession or some other un-programmed economic development? Or even a multi-quarter growth hiatus that may or may not be the on-set of an officially designated “recession” by the authorities at the NBER.

You editor speaks with some authority on this point—having helped devise such a “trigger tax” back in 1983 when Ronald Reagan was looking for a way to raise taxes to stem the exploding deficit caused by the 1981 cut without admitting he was back-tracking. The long and short of it was Reagan’s “trigger tax” never got off the ground because even the threat of a trigger release causes it own set of adverse but impossible to quantify economic feedbacks.

In addition, CNBC reported that other Republican senators opposed the “trigger tax” provision.

Bottom line, the Senate version of the tax bill is hanging on by a very thin thread. If the JCT does manage to publish an analysis, the bill will not be Byrd Rule compliant and will need 60 votes to pass the Senate. Good luck with that.

Equity bulls need to be prepared for a rude awakening should the JCT manages to publish its analysis before the Senate vote.

Notwithstanding the hurdles surrounding the passage of the Senate tax bill, Urban Carmel highlighted some short-term risks to the market after the strong market action on Tuesday:

US indices closed at new all time highs on Tuesday. The gain was so strong that SPX closed 25% above its Bollinger Band width. This is rare. There have been only 5 similar instances since 2009. None marked an exact short-term top in the market, but all preceded a fairly significant drawdown in the week(s) ahead. Risk-reward over this period was very poor.

While the sample size is low (N=5), he found that the market tended to rise for a few days, and suffer a substantial correction in the weeks ahead:

What is noteworthy is that none marked an exact short-term top in the market – price was usually higher the next day or two – but all preceded a fairly significant drawdown in the week(s) ahead. Risk-reward over this period was very poor.

Subsequent analysis going back to 1986 found that the risk-reward to be unfavorable as well:

For another perspective, the breadth metrics from Index Indicators found that the market was overbought on short (1-2 day), medium (3-5 days), and long (1-2 week) time horizons. 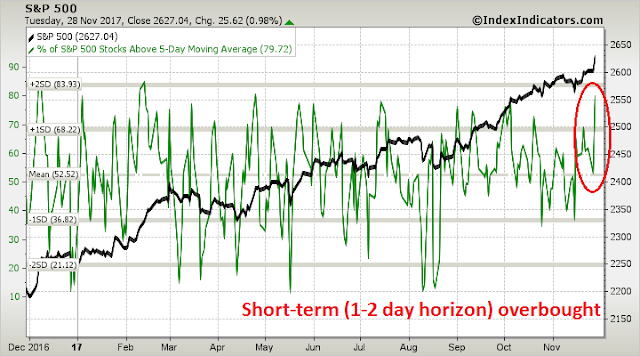 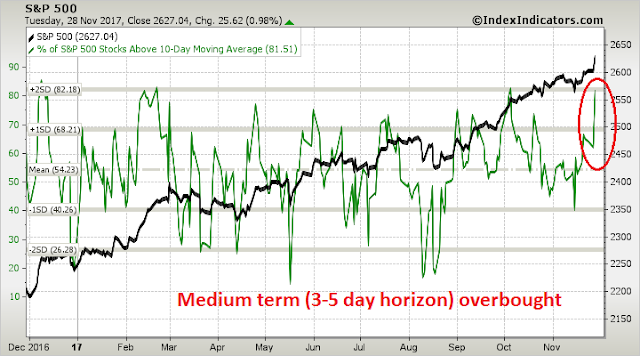 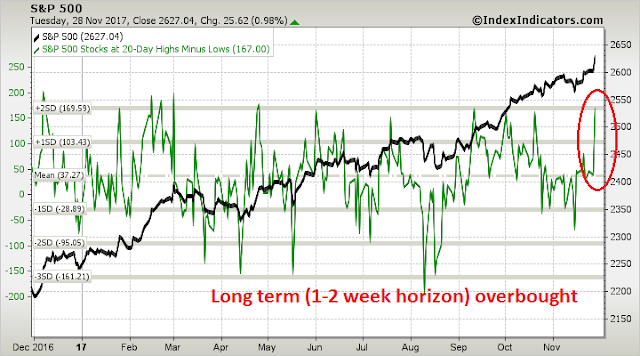 These readings do not necessarily mean that the market has to correct significantly. However, some consolidation or minor weakness may be in order in the near future.