I have stated that while I don’t believe that the stock market has made its final cyclical top, we are in the late stages of a bull market (see Risks are rising, but THE TOP is still ahead and Nearing the terminal phase of this equity bull). Nevertheless, psychology is getting a little frothy, which represent the pre-condition for a major top. This is just another post in a series of “things you don’t see at market bottoms”. Past editions of this series include:

As a result, I am publishing another edition of “things you don’t see at market bottoms”.

No doubt many investors have heard about the parabolic rise in the value of many cryptocurrencies. Now there is a gold rush to cash in on Initial Coin Offerings, otherwise known as ICOs.

Now Paris Hilton, the woman who is known for…being famous, has gotten into the act. 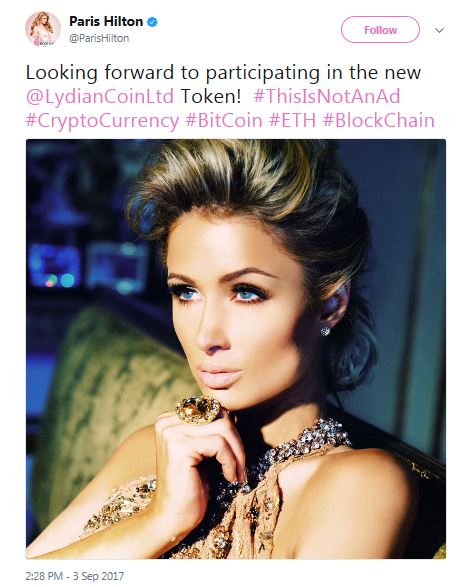 What exactly is the Lydian Coin? FT Alphaville explains:

Lydian Coin is from a company called Gravity4, whose chairman and chief executive, Gurbaksh Chahal, pleaded guilty in 2014 to misdemeanour battery charges of domestic violence.

The digital advertising business claims to be “the world’s first A.I. big data marketing cloud” and is raising $100m (!!!) through the sale of Lydian “tokens” to finance the development of… well, nothing really:

100% of the proceeds raised by the sale of Lydian tokens will be held by LydianCoin Pte. (in fiat currency or cryptocurrency, as financial, security, and other considerations may demand) as reserves against the cost of services to be performed for Lydian token holders upon negotiation of the token back to Lydian.

If the whitepaper is to be believed, the whole idea here is that people will pay for Lydian tokens and use them to buy advertising campaigns from LydianCoin, which in turn licences its technology, products and services from Gravity4. The money won’t be used for anything. It will just sit there, covering the enormous balance sheet liability this ICO will create for LydianCoin.

In other words, the Lydian Coin is nothing more than a gift card for services that you could have bought with ordinary money:

We’ve often talked about how ICOs are like buying funfair tickets for a funfair that hasn’t been built yet. This is like buying tokens for rides at a funfair when you could just use your money to pay for the rides directly. All that’s really happening here is people are paying for services in advance of receiving them, like purchasing a giftcard.

Not to be outdone, hedge fund manager, author and venture capitalist, James Altucher, has now moved to the Dark Side, and he is now flogging cryto-currencies. 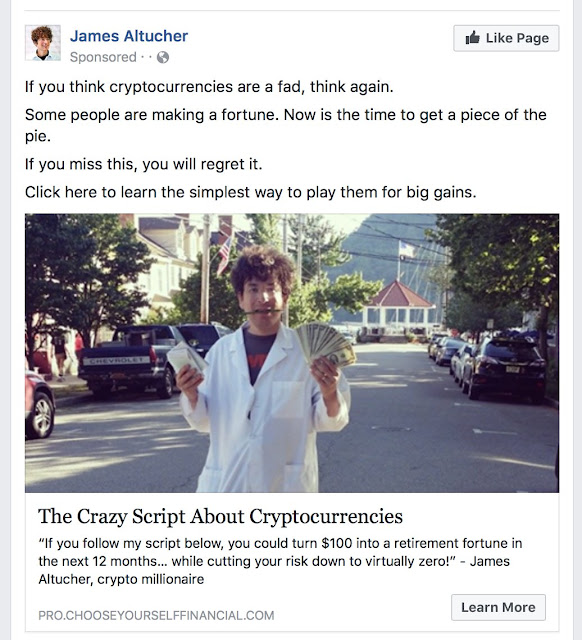 I can’t wait for the [shudder] leaked Altcher sex tape.

An update of the TD-Ameritrade Investors Movement Index, which measures Ameritrade client bullishness, shows that readings have reached another all-time high. 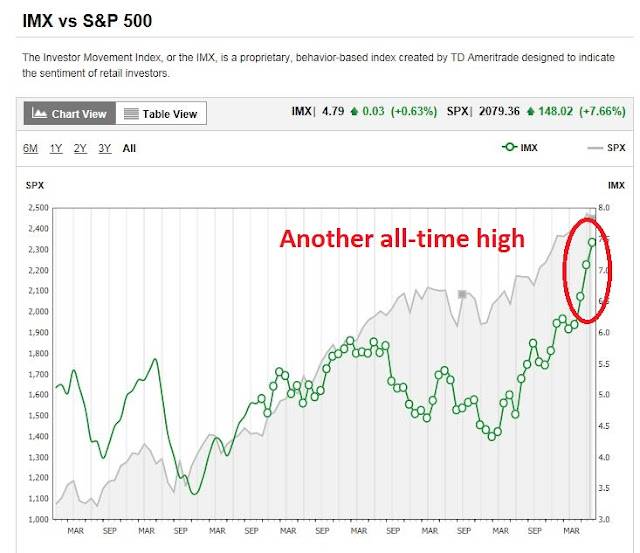 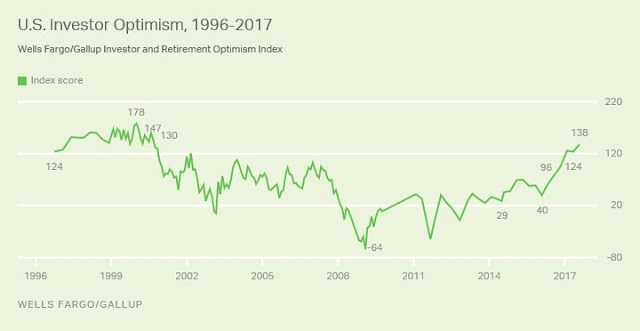 This story from the New York Times speaks for itself:

Each morning, at the market’s open, Seth M. Golden, a former logistics manager at a Target store, fires up the computer in his home office in northern Florida and does what he has done for years: Put on bets that Wall Street’s index of volatility, the VIX, will keep falling.

It has been a lucrative strategy as the so-called fear gauge has been, outside of the occasional spike, largely fearless — confounding experts by sloping persistently downward and in the process making Mr. Golden a multimillionaire.

The vol shorting strategy has been so successful that he is starting a hedge fund:

Now, he is starting a hedge fund dedicated to wagering against the VIX. Investors, he says, have been pounding on his door to get in early, offering him $100 million for starters.

It is like the credit cycle in many ways. There are two ways to get killed playing credit. One is to speculate that defaults are going to happen and overdo going short credit during the bull phase. The other is to be a foolish yield-seeker going into the bear phase.

So it is for people waiting for volatility to spike — they die the death of one thousand cuts. Then there are those that are short volatility because it pays off when volatility is low. When the spike happens, many will skinned; most won’t recover what they put in.

It is tough to time the market, whether it is equity, equity volatility, or credit. Doesn’t matter much if you are a professional or amateur. That said, it is far better to play with simpler and cleaner investments, and adjust your risk posture between 0-100% equities, rather than cross-hedge with equity volatility products.

Again, this is one where people are very used to selling every spike in volatility. It has been a winning strategy so far. Remember that when enough people do that, the system changes, and it means in a real crisis, volatility will go higher than ever before, and stay higher longer. The markets abhor free riders, and disasters tend to occur in such a way that the most dumb money gets gored.

Again, when the big volatility spike hits, remember, I warned you. Also, for those playing long on volatility and buying protection on credit default — this has been a long credit cycle, and may go longer. Do you have enough wherewithal to survive a longer bull phase?

It’s like picking up pennies in front of a steamroller. Use some leverage, and you start to make substantial money.

Merrill Lynch credit analysts down to only one idea

You know that a market is extended when sell-side analysts run out of ideas. After a relentless search for yield, BAML credit analysts have become exhausted. Bloomberg reported that they are down to one idea for fixed income investors:

Years of record-breaking new issuance combined with risk premiums that continue to narrow amid a seemingly insatiable appetite for credit, have resulted in what can only be described as a case of “sell-side block” for investment strategists at Bank of America Merrill Lynch.

In a note published on Wednesday, the team said it was “down to one” strategy in global credit: “just long U.S. investment grade.” The bank closed out a recommendation to buy exposure to junk-rated European company debt while shorting the region’s investment-grade bonds through two of the credit indexes in the Markit iTraxx family.

In a related comment about the search for yield, CNBC reported that Goldman Sachs CEO Lloyd Blankenfein expressed his unease about the general state of risk appetite in an interview at a European banking conference:

When yields on corporate bonds are lower than dividends on stocks that unnerves me. The biggest problem, the anxiety that people have, is non-specific to what asset we are pointing to but the general feeling that things have been going up for too long. 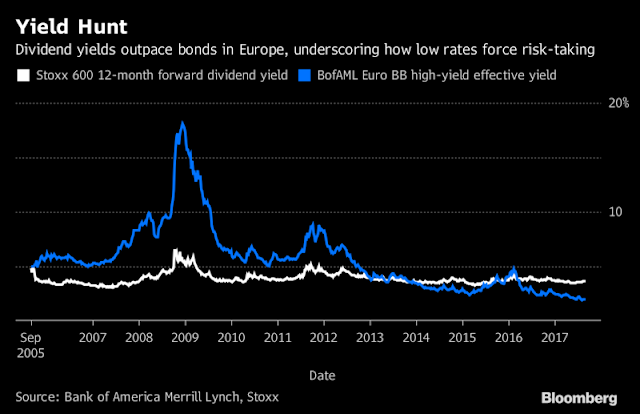 Not the top, but…

For now, the frothy excess that I cited in this and past posts represents a “this will not end well” narrative without an obvious bearish trigger. However, sentiment doesn’t function well as precise market timing tools.

I reiterate my belief that this is not the top of the equity market (see Correction is over, wait for the blow-off top). Nevertheless, investors should be aware of the risks of an environment in which sentiment has become increasingly frothy.