I have stated that while I don’t believe that the stock market has made its final cyclical top, we are in the late stages of a bull market (see Risks are rising, but THE TOP is still ahead). Nevertheless, psychology is getting a little frothy, which represent the pre-condition for a major top.

As a result, I am starting a one in an occasional series of lists of “things you don’t see at market bottoms”:

Earlier in the week, Argentina announced that it had received USD 9.75 billion in its financing for a 100-year USD denominated bond offering (via Reuters). Demand was strong, and the deal was priced at a yield of 7.9%.

Excuse me? Didn’t Argentina just emerge from default? Who in his right mind would lend Argentina money at 7.9% for 100 years? This financing is evidence of how starved the market is for yield.

If you don’t think that financing is unreasonable, then I have the following question for anyone who voted for Donald Trump. The latest small business confidence figures from NFIB shows confidence surged in after the November election. Undoubtedly, much of the rise was attributable to the renewed optimism of Trump supporters in the small business sector. 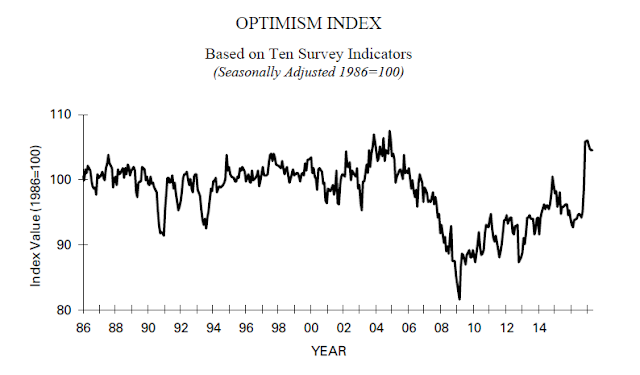 How much would you lend money to a Donald Trump led government? The yield on a 7-8 year Treasury, assuming a two-term Trump presidency, is about 2%.

Jeroen Blokland recently pointed out that the Irrational Exuberance Indicator, which is calculated from Yale’s survey of confidence that the “market will be higher one year from now” compared to confidence in “valuation of the market”, has risen to levels that were higher than past market peaks. 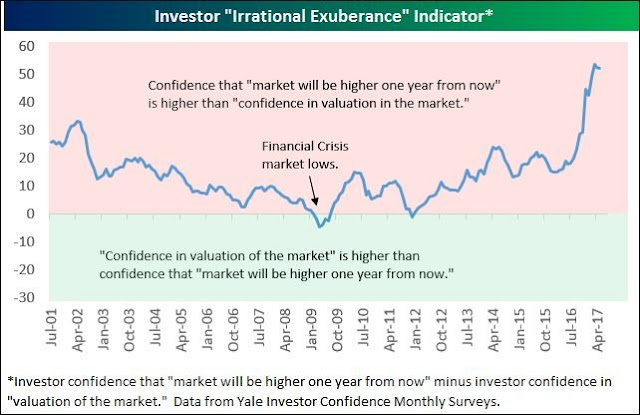 This is definitely another thing that you don’t see at market bottoms.

Joe Wiesenthal recently made an off-beat observation about E*Trade (ETFC): 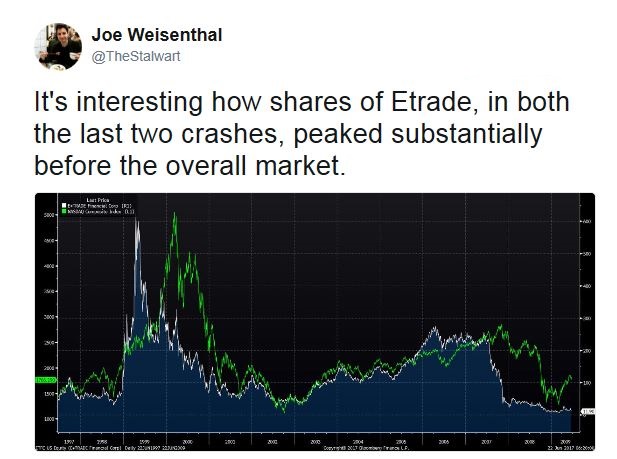 Both ETFC and IAI are struggling to achieve new highs even as the SPX rises to new highs. Is this another warning of a market top?

Economic recessions serve to unwind the excesses that occurred in the previous expansion. In the US, there are no significant excesses, if unwound, are likely to totally tank the economy. While some valuation excesses can be found in unicorns, the implosion of Snapchat, Uber, or other Silicon Valley darlings are unlikely to cause significant economic damage.

From a global perspective, however, much of the excesses can be found in China. The New York Times recently reported that the market was getting spooked because Beijing was cracking down on the foreign takeover financing of a number of large Chinese conglomerates:

Some of China’s largest companies may pose a systemic risk to the country’s banks, a senior banking official said on Thursday, in the latest signal that Beijing is ratcheting up scrutiny of a financial system plagued with hidden debt that poses a hazard to the health of the economy.

The official, Liu Zhiqing of the China Banking Regulatory Commission, did not name any companies. But shares of some of China’s biggest global deal makers plunged on Thursday.

They included the publicly traded arms of Fosun International, which in recent years bought the Club Med chain of resorts and other properties; Dalian Wanda, which owns the AMC Theaters chain in the United States and has long sought deals in Hollywood; and the HNA Group, an acquisitive conglomerate with murky ownership.

At a briefing on Thursday in Beijing, Mr. Liu, deputy head of the commission’s prudential regulation bureau, said that his agency was looking into “systemic risk of some large enterprises,” according to numerous media accounts, and that the risk could spread to other institutions.

Bloomberg columnist David Fickling revealed that much of the concerns stemmed from the fact that many of the large Chinese acquirors have been free cash flow negative. In other words, these companies are relying on the kindness of the financial system to maintain both solvency and their acquisition sprees.

By contrast, FCF of recent major American acquirors have been consistently positive.

These two charts dramatically illustrate the point of the differences in the levels of financial excesses between China and the US. While I am not predicting an imminent collapse of the Chinese economy, this is another thing that you don’t see at market bottoms.

Despite these negatives, I reiterate my contention that this is not the top of the equity market. In a future post, I will explain why the global reflation trade still has some life left.