A market breadth model that works – Humble Student of the Markets

Mid-week market update: Technical analysts monitor market breadth, as the theory goes, to see the underlying tone of the market. If the major market averages are rising, but breadth indicators are not confirming the advance, this can be described as the generals leading the charge, but the troops are not following. Such negative divergences are signs of technical weakness that may be a precursor to future market weakness.

I have been highly skeptical of breadth indicators as a technical analysis tool because breadth divergences can take a long time for the market to resolve, if at all. The chart below shows the SPX, the “generals”, along with several indicators of how the “troops” are behaving, namely the mid-cap and small cap indices, as well as the the NYSE Advance-Decline Line.

The behaviour of these indicators during and after the Tech Bubble was problematical. During the advance from 1998 to 2000, the NYSE A-D Line fell and flashed a negative divergence sell signal. At the same time, both the mid- and small-cap indices continued to rise and confirmed the market advance. Which divergence should investors believe?

After the market peaked in 2000, the mid and small caps traded sideways, which represented a non-confirmation of the bear market. Investors who followed this buy signal would have seen significant drawdowns during this bear market.

To be sure, there were periods when breadth indicators worked. The NYSE A-D Line traded sideways during the market decline of 2011, which was a buy signal. As well, it correctly warned of market weakness in 2015.

Putting it all together, the report card for these indicators can best be described as inconsistent and the timing of the signal uncertain. At a minimum, no investor would use breadth indicators in a trading system.

I believe that I discovered a solution to the problems that technicians struggle with when they use breadth indicators.

I solved that problem by using the Equal-Weighted SPX (SPXEW) as a breadth indicator. Both the equal-weighted and float-weighted SPX have the same companies in the index, with the only difference being the individual company weights in each index.

I studied the return pattern of SPXEW and SPX from 2003 and created a trading system based on the following rules:

The chart below shows the results of our study. There were 15 signals during the test period, and average returns beat the SPX one week after each signal. 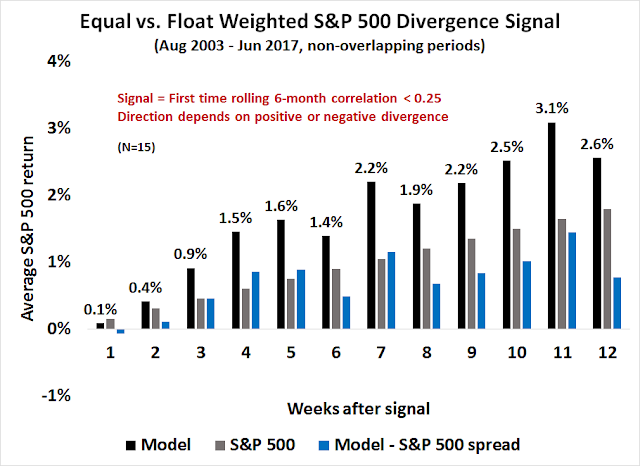 Another way of analyzing the model is to monitor the success rate, or percentage of times the returns are positive, after the signal. Based on the combination of the chart above showing average returns, and the chart below showing success rate, the optimal holding period is roughly 7–10 weeks after a signal. 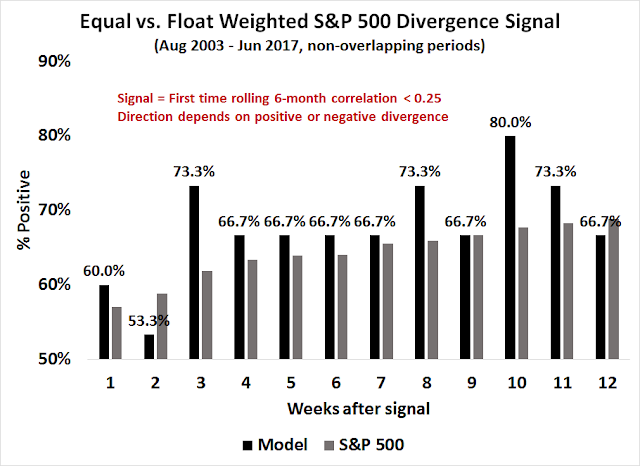 What is the SPXEW Breadth Model telling us now?

The chart below graphically depicts the results of our study of this model. It shows the SPX (black, top panel), the SPXEW/SPX ratio (green, top panel) and the rolling 26-week correlation (bottom panel) since 2007. Past positive divergence are marked in blue, and negative divergences marked in red. 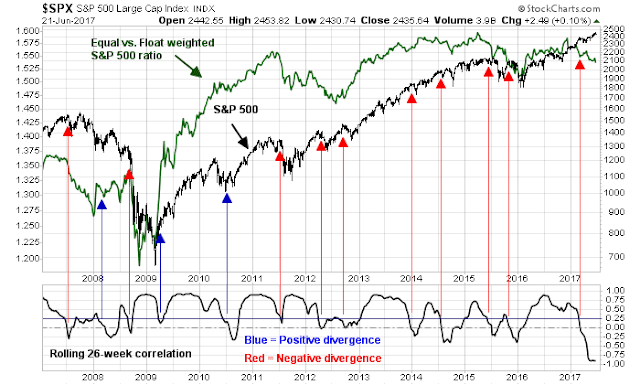 Currently, the SPXEW Breadth Model is on a severe negative divergence, and therefore a sell signal, which began in early March. I am somewhat puzzled by these readings. Either the model is turning out to be ineffective this time as we are almost past the optimal holding period, or it is warning of a significant correction in the near future. 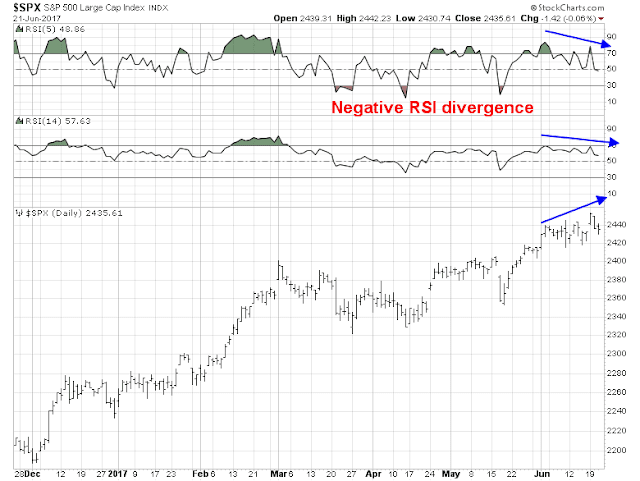 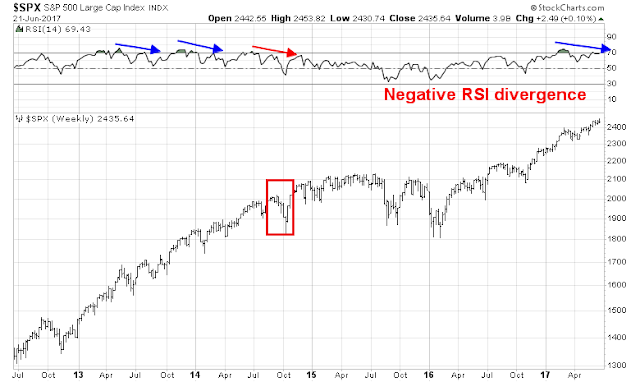 In conclusion, the US equity market still faces near-term downside risks and sloppy market action. As long as the US Economic Surprise Index (ESI) remains weak, the market may continue to struggle. As the chart below shows, a far more likely outcome is some degree of convergence between eurozone ESI and US ESI in the months ahead. 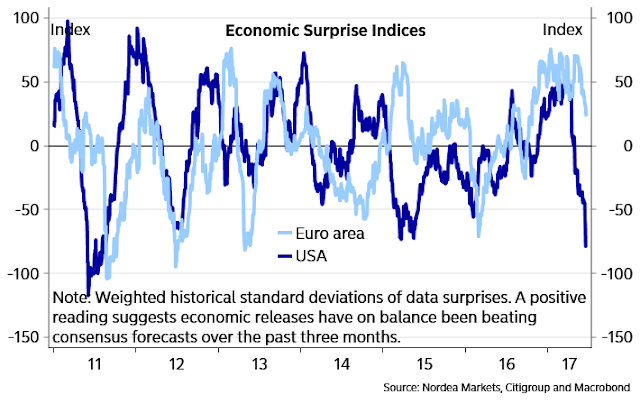 5 thoughts on “A market breadth model that works”