Recently, Ben Snider at Goldman Sachs published a report entitled “The Death of Value”, which suggested that the value style is likely to face further short-term headwinds. Specifically, Snider referred to the Fama-French value factor, which had seen an unbelievable run from 1940 to 2010 (charts via Value Walk). 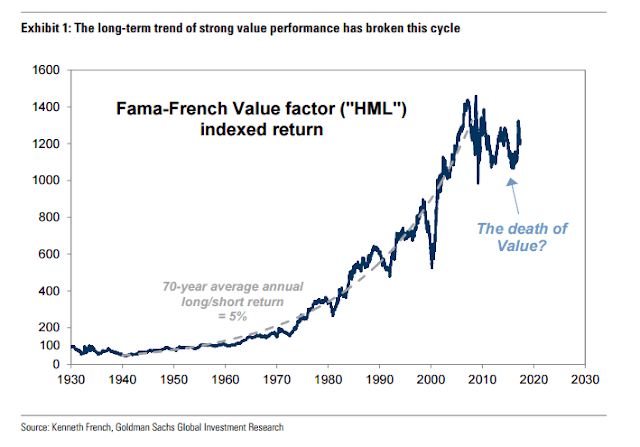 Goldman Sachs went on to postulate that the value style is unlikely to perform well because of macro headwinds. This style has historically underperformed as economic growth decelerates. However, the investment implications are not quite as clear-cut as that, based on my analysis of how investors implement value investing.

Consider how you might implement a value strategy. Imagine if you ranked all the stocks in your investment universe by the P/E ratio, which is a well-known value factor, and you created a buy list consisting of all the stocks in the bottom 20% by P/E. This buy list would have enormous sector bets. Since bank and utility stocks tend to have lower P/E ratios when compared to technology stocks, the buy list would be overweight banks and utilities, and underweight technology. That is what is known as a naive value factor.

Supposing that you didn’t want to a buy list that had sector and industry bets. You could rank your investment universe by P/E net of other factors, such as sector and industry, market cap (size), and so on. That’s what quants call a pure value factor.

This explanation is not meant to denigrate any single investment style. Some value investors, such as Warren Buffett, has successfully implemented naive value for many years by avoiding technology stocks as “too hard to understand”. Other quant investors have implemented pure value factor investing as a way of controlling risk.

The Fama-French value factor is a form of a pure value factor. By contrast, the Russell 1000 Value Index (RLV) and Russell 1000 Growth Index (RLG) have significant sector weight differences and can be better characterized as naive value bets.

That’s where the difference in value investing lies.

Sizing up the macro bets

One way of sizing up the value bet is to consider the sector weightings between RLV and RLG. As the chart below shows, a long naive value (RLV)/short growth (RLG) portfolio would be long Financial Services and Energy, while underweight Technology and Consumer Cyclical, though much of the latter is an AMZN effect because of the large weight that stock has in the Consumer Cyclical sector. 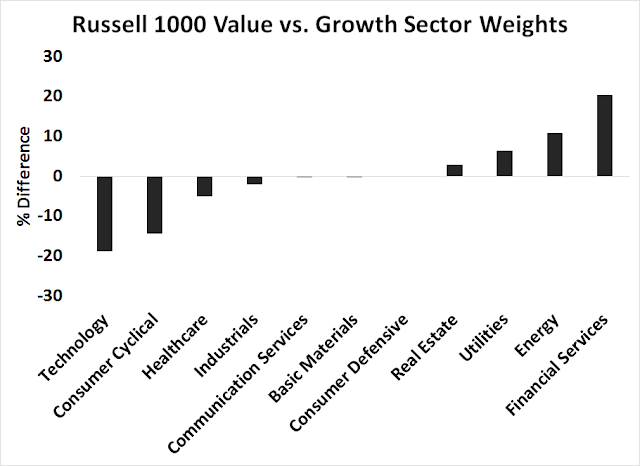 While Tech stocks have been on a tear for most of 2017, I would caution that differences in sector weights do not fully explain the value style shortfall. Analysis from GMO stated:

It should be noted that value’s underperformance cannot be explained solely by its relative underweight of the Information Technology sector. For example, in the US, a sector-neutral value portfolio consisting of the cheapest quartile of stocks from within each sector would still have underperformed a sector-neutral growth portfolio by approximately 4% in the first 5 months of 2017. 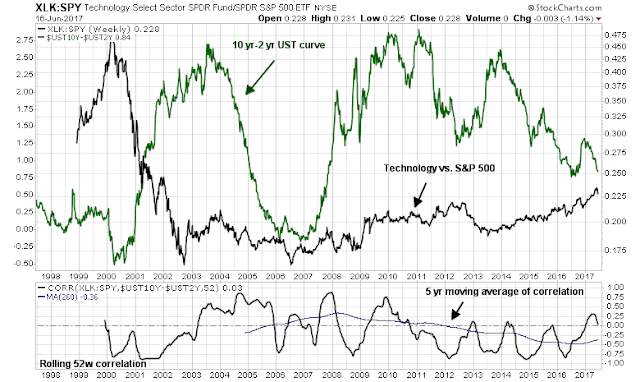 By contrast, here is the same chart for Financial stocks, which has shown a positive correlation with the shape of the yield curve. These stocks tend to perform better when the yield curve steepens. 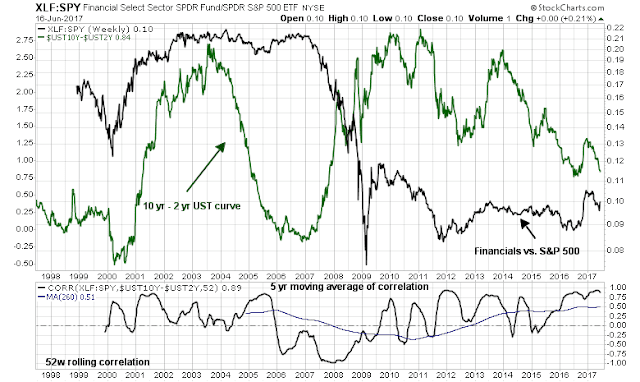 A similar analysis of the Energy sector came to the same conclusion. In the last decade, Energy stocks have outperform when the yield curve steepens, indicating accelerating growth. 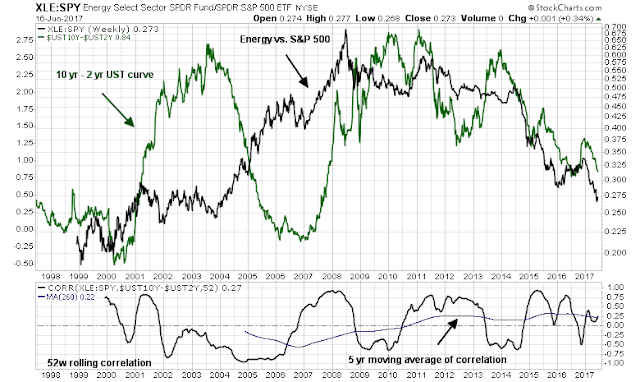 The foregoing analysis has led me to believe that Goldman’s publication of “The Death of Value” report is setting up for a revival of the value factor. Consider how such a pain trade might unfold. The latest BAML Fund Manager Survey shows that US institutions are overweight the big growth sectors (Tech and Discretionary) and slightly underweight the big value sectors (Banks and Energy). 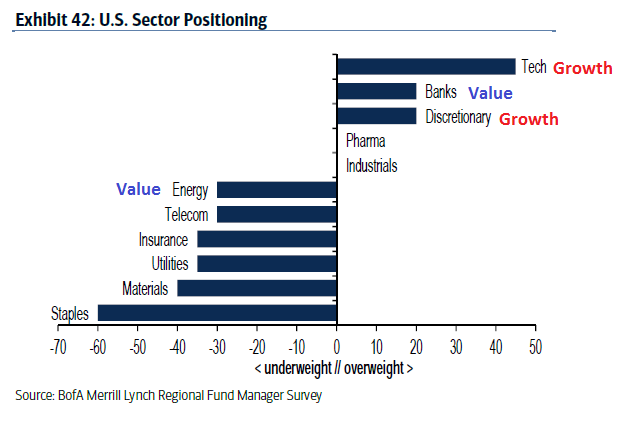 In my last post (see The risks are rising, but THE TOP is still ahead), I suggested that the stock market is poised for a revival of the global reflation trade after a brief June swoon, or hiatus. The recovery would be characterized by the leadership in capital goods stocks, which may be just staring now, and capped off by a surge in inflation hedge sectors such as gold, energy, and mining. The resurgence of the reflation investment theme would also be accompanied by a steepening yield curve.

Should the market’s perception shift to a better growth outlook, then the yield curve will begin to steepen again, which would benefit the big value sectors of Banks and Energy while hurting Technology.

As well, current positioning suggests that a long value (Energy and Banks) and short growth (Technology and Discretionary) is a promising contrarian setup. That trade may be still a little bit early. I would prefer to wait for definitive signs that Energy and Mining stocks have shown signs of a relative market bottom before committing to that trade. 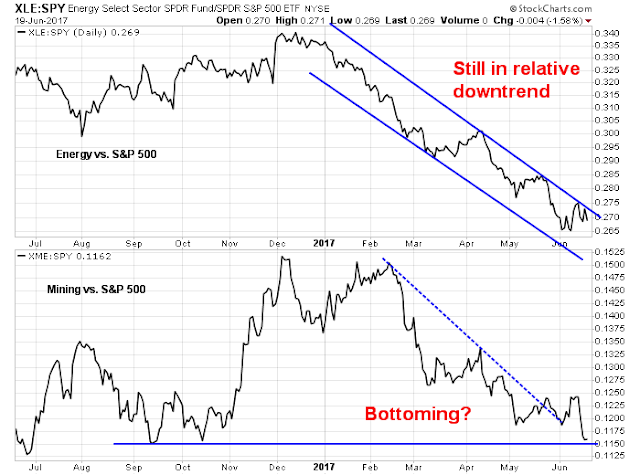 An alternative signal to buy value stocks might be a bottom in the Citigroup US Economic Surprise Index (ESI). This index is designed to measure whether macro releases are beating or missing expectations, and it is also designed to be mean reverting. As the chart shows, ESI has been correlated with Treasury yields. When ESI does turn up, yields will also rise, which will probably coincide with a steepening yield curve. 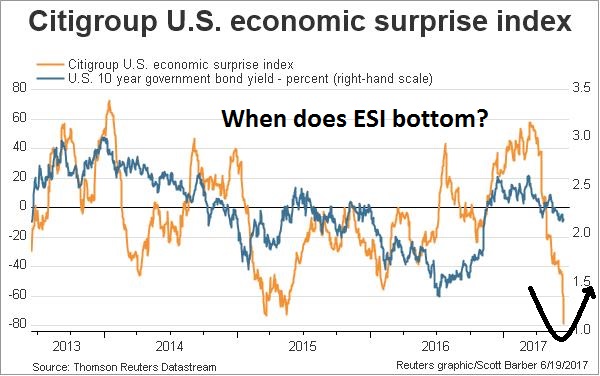 That will also be a signal of a more friendly environment for Russell 1000 Value stocks.