Long live the reflation trade! – Humble Student of the Markets 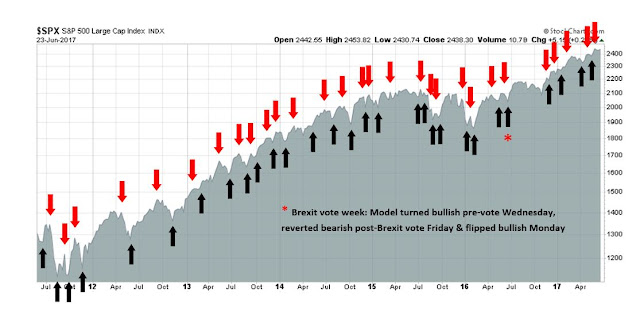 The global bull keeps on charging

Despite my recent negativity (see Risks are rising, but THE TOP is still ahead and Things you don’t see at market bottoms, 23-Jun-2017 edition), I am not ready to throw in the towel on this equity bull market.

From a long-term perspective, the reflation trade is still alive, and growth is global in scope. As the 20-year monthly chart below of the Dow Jones Global Index (DJW) shows, the last two tops were preceded by negative RSI divergences. So far, DJW is barely overbought and has not even had the opportunity to exhibit a negative RSI divergence. This suggests that global equities can continue to grind higher, and the ultimate top is, at a minimum, several months away. 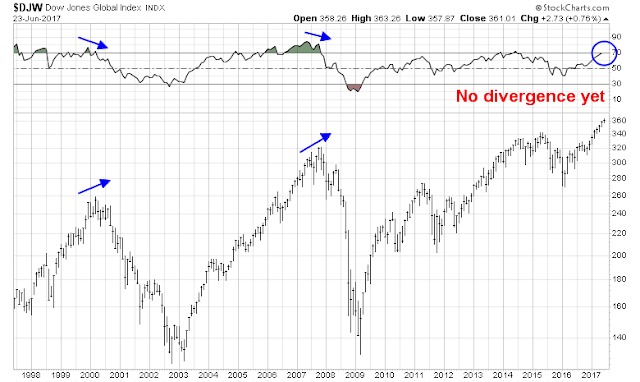 The tactical outlooks suggests that there may be some near-term weakness ahead. Drilling down to the weekly chart, DJW has shown a pattern of flashing double RSI overbought sell signals. In the past, the index has achieved a first RSI peak overbought reading (dark vertical line) which was followed by a second RSI peak (red vertical line). DJW has recently shown the same double overbought peak pattern, and, if history is any guide, the market is likely to stage a minor pullback. 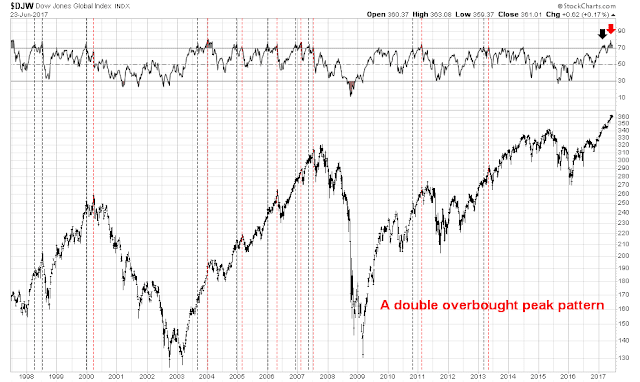 I interpret these technical conditions as being in favor of the global reflation trade, though some minor pause may be necessary. This scenario is consistent with current macro and fundamental readings that are supportive of a reflationary driven equity advance..

Starting with the US, Neil Dutta of Renaissance Macro observed that a simple but rarely used leading indicator is pointing to improving growth. 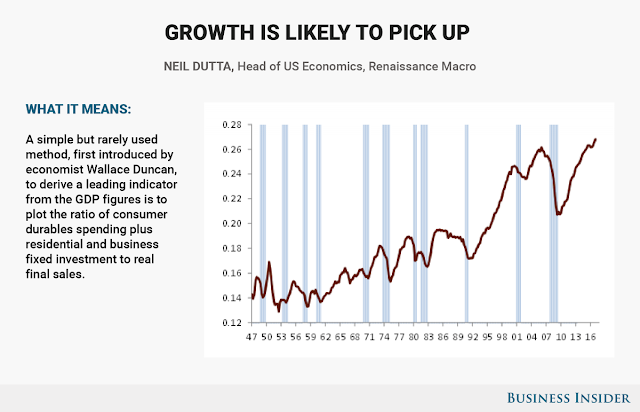 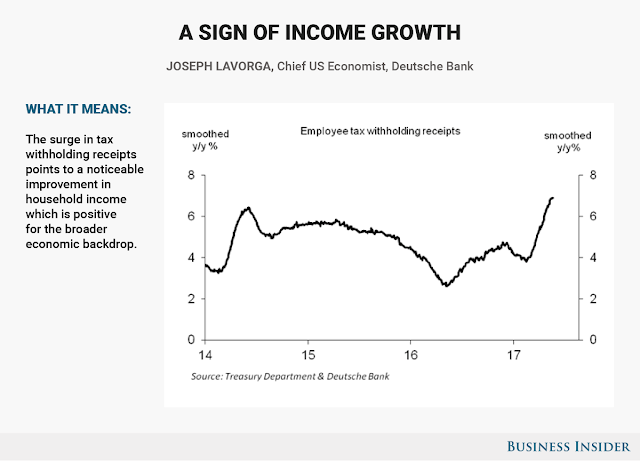 From a bottom-up perspective, the latest update of earnings estimates from FactSet shows that forward EPS continues to rise. Fundamental momentum of rising estimates should act to support higher stock prices in the near future. 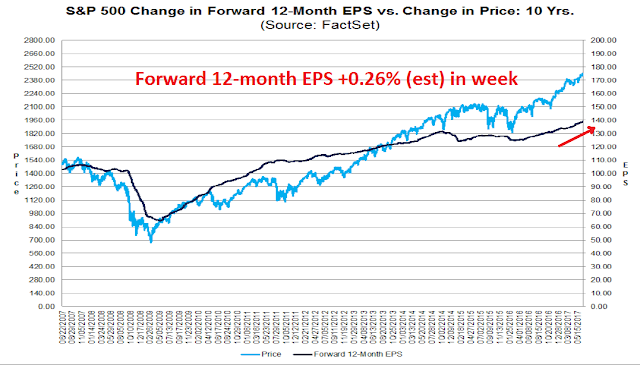 Last week, I wrote that the next stage of the market cycle typically sees leadership from capital-goods intensive stocks (see Risks are rising, but THE TOP is still ahead). The market relative breakout of the Industrial sector that I observed last week proved to be premature. Nevertheless, the technical pattern remains constructive. 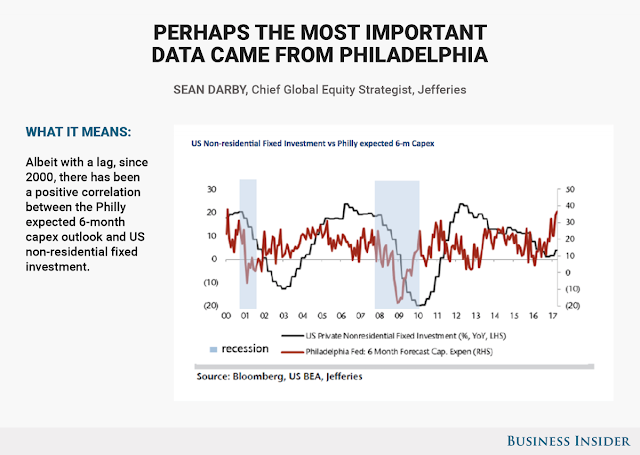 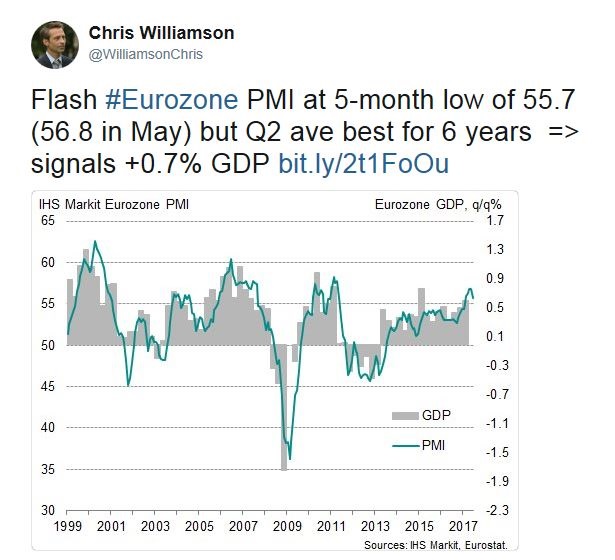 Moreover, Williamson also noted that employment in the eurozone is likely to be strong. 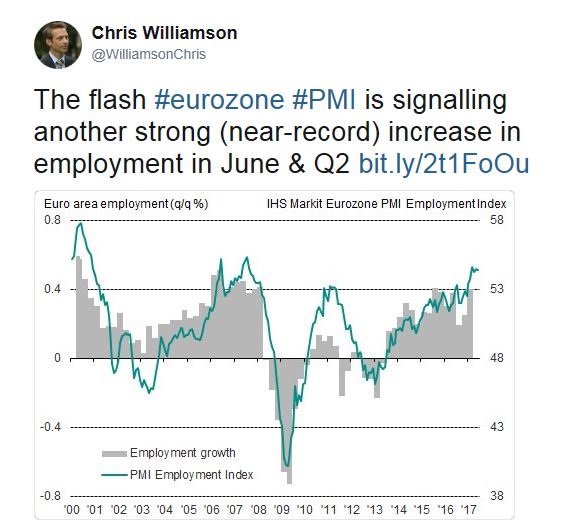 The recent record of better than expected growth has propelled the Euro STOXX 50 to break out of its relative downtrend against the MSCI All-Country World Index.

Over in Asia, the market signal from the performance of the stock indices of China’s major Asian trade is positive. Beijing’s crackdown on credit and the shadow banking system has shown little or no effect on Asian stock markets. The Shanghai Composite has managed to recover above its 50 and 200 dma, and only the resource heavy Australian market is struggling below its 50 dma. 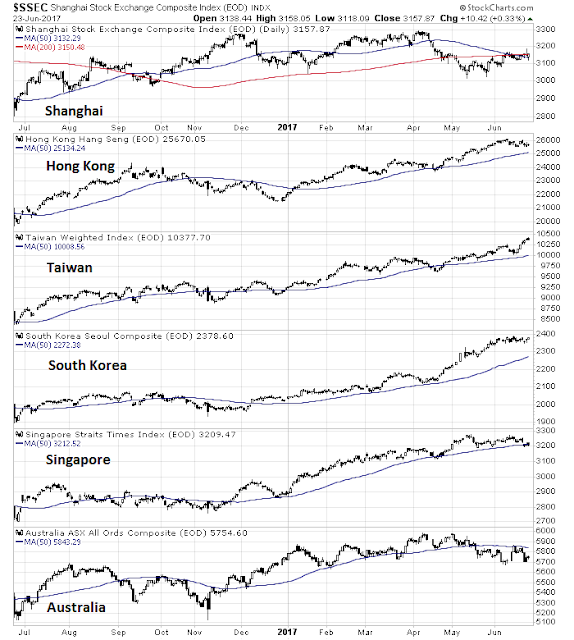 The Chinese authorities appear to have engineered the perfect economic re-balancing even as they tightened credit. My two pair trades of long new “consumer” China and short old “finance and infrastructure” China shows that new China is winning.

In short, the global reflation trade remains on track, with few impediments in sight.

How the Fed could take away the punch bowl

The biggest risk to the global reflation trade is a Fed policy that is more hawkish than market expectations. This chart from Albert Edwards (via Business Insider) tells the story of how the market doesn’t believe that the Fed`s dot plot rate hike projections. As the Fed announced its latest rate increase, 2-year Treasury yields barely budged, indicating market disbelief of further tightening because of tame inflation statistics.

That’s where the market may be in for a big surprise. Tim Duy agrees. He is turning to the hypothesis that the Fed is working backwards in order to justify its rate normalization policy. It first specifies the interest rate target, and works backwards to arrive at projected inputs afterwards:

While this approach of calculating the answer first and massaging model inputs is inherently objectionable, Duy thinks that Yellen believes the risks of the Fed falling behind the curve is rising quickly:

Yellen must feel there is a substantial risk of undershooting the natural rate of unemployment. It’s implied by the Fed’s growth forecast and Yellen’s view of the labor markets. This explains the Fed’s hawkishness in the face of low inflation. Indeed, despite years of below target inflation, officials continue to attribute the weak numbers to transitory factors. Yellen’s “idiosyncratic factors” has become a defense mechanism in response to fears that if unemployment drifts too low they can stave off inflation only by triggering a recession.

Ultimately, the Fed sees the risks associated with undershooting the natural rate of unemployment as greater than those of low inflation.

What this means is that the Fed will not turn dovish easily. Officials will not take their rate hike plans and go quietly into the night, even in the face of low inflation. Expect their baseline case to remain another rate hike and balance sheet reduction this year, plus another three 25 basis point hikes next year.

If Duy’s interpretation of Fed policy is correct, then the risk of a central bank engineered economic slowdown is substantially higher than expected. At a minimum, the market is going to be in for a big surprise.

Let’s consider how the market might react to this “new reality”. Currently, the 2/10 yield curve stands at about 0.80%. Supposing the Fed were to hike again in September and signals that it will pause in December, but begin to reduce its balance sheet then, which is another form of tightening. 2-year yields adjust upwards by 50bp (25bp for the September hike and 25bp for a delayed effect from the June hike), while 10-year yields compress by 20-30bp. The result is a yield curve that gets very close to inversion. As the chart below shows, equity market tops have either coincided or shortly followed yield curve inversions in the past. 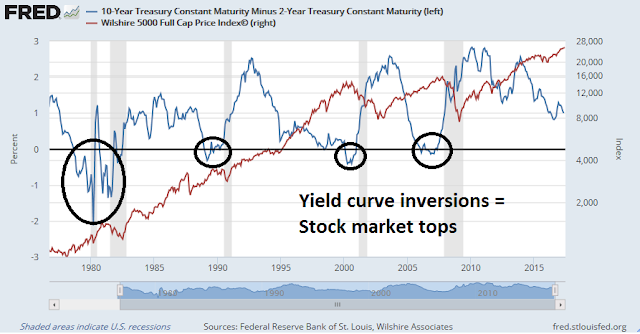 On top of that, we haven`t even considered the additional risk that the FOMC becomes more hawkish with the addition of Trump appointees to the Board of Governors (see More surprises from the Fed?), New governors are likely to adhere to the Republican audit-the-Fed orthodoxy of rules-based monetary policy.

That day of reckoning is not here yet, and such a scenario is purely speculative. Meanwhile, enjoy the reflation party.

Looking to the week ahead, the short-term technical direction is less clear-cut than it has in the past. Both the bull and bear cases are equally compelling.

The short-term bull case can be summarized by this breadth chart from Index Indicators. The market is starting to rebound after a mild oversold reading, indicating a possible change in direction. 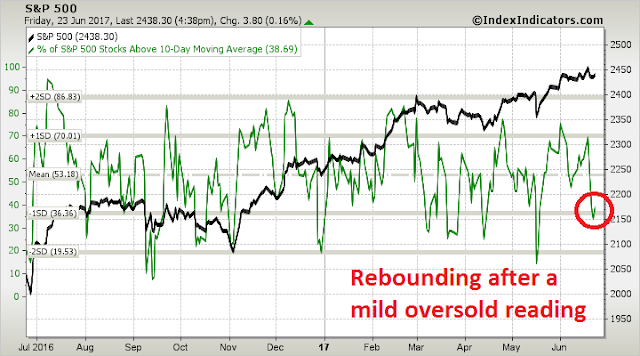 The correction that I have been calling for seems to have been accomplished in time rather than in price. As the chart below shows, the recent Tech correction appears to have been nothing more than just performance mean reversion and internal rotation. 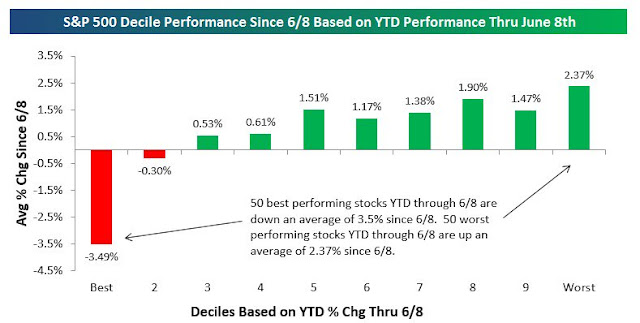 As well, option sentiment flashed an unusual contrarian signal on Thursday, when the CBOE Equity Put/Call Ratio (CPCE) fell to 0.50, which is a historically low reading. Thursday’s low CPCE was followed by an equally low 0.58 on Friday. What is unusual is this was accomplished when the stock market was flat to down. CPCE is normally low when the market is rallying, and a low put/call ratio is reflective of the growing bullishness momentum traders. The only instance in the last two years of CPCE at 0.50 or less on flat returns resolved itself with a minor pullback. 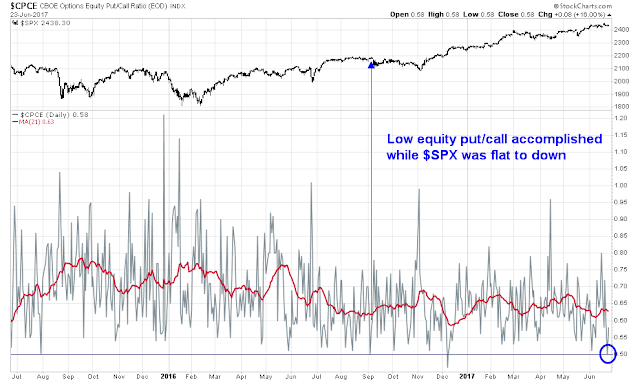 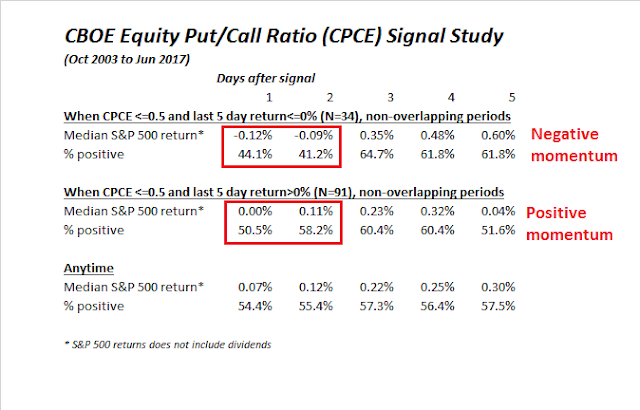 These cross-currents in the market has left my inner trader utterly confused. He is inclined to believe that the market is likely to trade sideways in a choppy fashion until either and upside breakout or downside breakdown is accomplished.

My inner investor remains constructive on equities. My inner trader is hanging on to his short position, though he may opportunistically cover his position on weakness and move to the sidelines.