More surprises from the Fed? – Humble Student of the Markets

In my last post, I suggested that the odds favored a hawkish rate hike (see A dovish or hawkish rate hike?) and I turned out to be correct. However, some of the market reaction was puzzling, as much of the policy direction had already been well telegraphed.

As an example, the Fed released an addendum to the Policy Normalization Principles and Plans, which should not have been a surprise to the market:

The Committee intends to gradually reduce the Federal Reserve’s securities holdings by decreasing its reinvestment of the principal payments it receives from securities held in the System Open Market Account. Specifically, such payments will be reinvested only to the extent that they exceed gradually rising caps.

These steps were discussed in length in separate speeches made by Fed Governors Jerome Powell and Lael Brainard:

Under the subordinated balance sheet approach, once the change in reinvestment policy is triggered, the balance sheet would essentially be set on autopilot to shrink passively until it reaches a neutral level, expanding in line with the demand for currency thereafter. I favor an approach that would gradually and predictably increase the maximum amount of securities the market will be required to absorb each month, while avoiding spikes. Thus, in an abundance of caution, I prefer to cap monthly redemptions at a pace that gradually increases over a fixed period. In addition, I would be inclined to follow a similar approach in managing the reduction of the holdings of Treasury securities and mortgage-backed securities (MBS), calibrated according to their particular characteristics.

The only details that were missing were the exact numbers of the caps. Further, there are no discussions about active sales from the Fed’s holdings, which was also not a surprise.

The Fed’s gradual approach of allowing securities to mature and roll off the balance sheet means that investors who are watching the shape of the yield curve will not have to worry too much about Fed actions in the long end that might distort market signals. This chart, which I made from data via Global Macro Monitor, shows that the Fed holds an extraordinary amount of the outstanding Treasury issues once the maturity goes out 10-15 years. 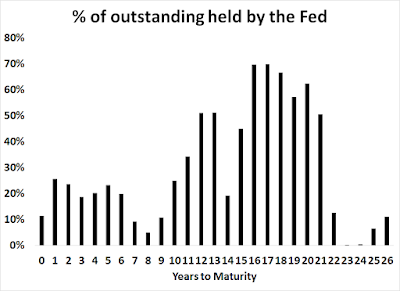 These facts are all well known to the public and therefore the Fed’s plans for normalizing the balance sheet should not be a big surprise.

The bigger surprise that is not in the market are the views of Marvin Goodfriend, who is rumored to be a nominee for a post on the Fed’s Board of Governors. Reading between the lines, as there are three board vacancies, three rumored nominees, and historical experience has shown that new Fed chairs are already Fed governors at the time they are nominated, that means Trump will either keep Yellen as Fed chair in February, or her replacement will come from the new crop of new governors. The most likely candidate is Marvin Goodfriend.

This recent video of Marvin Goodfriend is highly revealing of his views (use this link if the video is not visible).

In the video, Goodfriend reviewed his Jackson Hole paper that advocated negative interest rates when interest rates fall below zero. He believes that the Fed can drive rates to significantly negative levels by breaking the link between the value of money in the banking system and paper currency. The Fed could take steps to either restrict or refuse the issuance of paper currency, e.g. $100 bills. It could also encourage banks to charge customers a service charge if a depositor withdraws money in paper currency. Those steps would discourage customers from asking for currency and coins, and therefore remove the arbitrage between balances earning negative interest rates in a bank and taking the money out and putting it under a mattress.

Goodfriend has also made it clear that he is no fan of balance sheet policies, otherwise known as quantitative easing, in response to interest rates at the zero lower bound. Here is the key quote [which is visible at about the 25:00 mark]: “Inflation is financial anarchy…Resorting to higher inflation to get away from this [zero bound] problem to me is the equivalent to appeasement in international affairs.”

It is clear that Goodfriend is a traditional monetarist in philosophy and he would push monetary policy in a much more hawkish direction. As this hawkish outcome has not been discounted by the market, the market would freak out once the news of his nomination hits the tape.

8 thoughts on “More surprises from the Fed?”