A dovish or hawkish rate hike? – Humble Student of the Markets

Mid-week market update: I am writing my mid-week market update one day early. FOMC announcement days can be volatile and it’s virtually impossible to make many comments about the technical condition of the market as directional reversals are common the next day. Mark Hulbert suggested to wait 30 minutes after the FOMC announcement, and then bet on the opposite direction of the reaction. For what it’s worth, Historical studies from Jeff Hirsch of Almanac Trader indicated that FOMC announcement days has shown a bullish bias and the day after a bearish one. 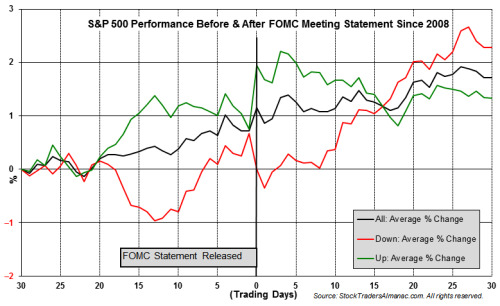 The Fed has signaled that a June rate hike is a virtual certainty. The only question for the market is the tone of the accompanying statement. Will it be a dovish or hawkish rate hike?

The case for a hawkish hike

Despite expectations that the Fed may tone down its language because of tame inflation statistics, there is a case to be made for a hawkish rate hike. Tim Duy thinks that the Fed will be mainly focused on employment, rather than inflation, in setting monetary policy:

The recent inflation data doesn’t exactly support the Federal Reserve’s monetary tightening plans. Chair Janet Yellen and her colleagues will surely take note of the weakness at this week’s Federal Open Market Committee meeting, but they will downplay any such concerns as transitory. At the moment, low unemployment remains the focus. Add to that loosening financial conditions and you get a central bank that is more likely than not to stay the course on its plan to hike interest rates.

FOMC participants will follow the logic of San Francisco Federal Reserve Bank President John Williams and attribute recent inflation trends to “special factors,” notably the decline in cellular service prices as measured by the Bureau of Labor Statistics. With this explanation in hand, they will hold firm to their medium term projections that anticipate inflation will soon return to target. The stability of those forecasts is more important for the anticipated course of policy than recent inflation deviations. 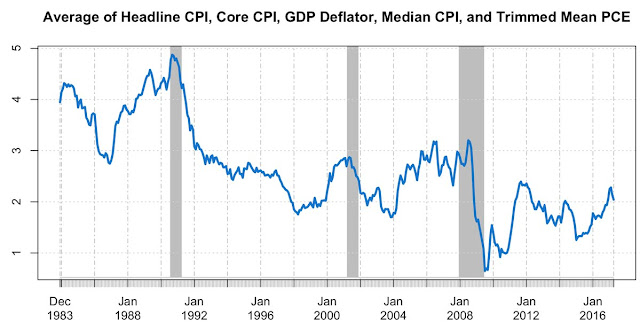 Across the Curve highlighted analysis from Chris Low of FTN Financial, who pointed out that the Fed is likely to stay on its three rate hike path for this year because the Goldman Sachs Financial Condition Index is signaling easier credit conditions even as the Fed has tightened:

The front page Fed-vs-the-financial markets article in today’s WSJ dives into what ought to be the most controversial reason the Fed is raising rates this year: They have decided stocks are overvalued and they can’t stand when long-term interest rates fall when they raise short rates. The paper notes the Goldman Sachs Financial Conditions Index, which has fallen considerably since December, suggesting markets have eased more than the Fed has tightened. The GSFCI is just exactly the sort of thing the Fed loves to watch while tightening because it allows FOMC participants to ignore the economic damage they are doing to real world economic activity.

Low went on to criticize the construction methodology of the GSFCI and thinks its readings are misleading:

The GSFCI falls when the Fed tightens because it fails to recognize a flat yield curve as a sign of tight financial conditions. In the index, the drop in long yields offsets the rise in short rates. The GSFCI was very low in 2007, for instance, a year in which millions of borrowers were driven into default. And the Fed, watching things like the GSFCI instead of real-life activity in the financial sector – you know, like lending and borrowing activity – failed to recognize how tight financial conditions were in 2006-07. In fact, they did not just fail to recognize it at the time, FOMC participants failed to admit excessive tightening even three years later, in the aftermath of the worst credit crunch since the Great Depression. 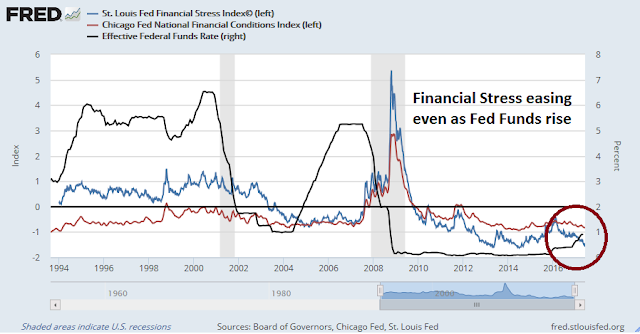 Low went on to forecast a more hawkish tone from the Fed:

As far as predicting what the Fed will do, the drop in the GSFCI significantly raises the odds of more aggressive behavior. After all, NY Fed President Bill Dudley cited the GSFCI two weeks ago, right before the Fed’s communications blackout, saying there is no reason to think the Fed has tightened too much if financial conditions are easing. Dudley is the Fed’s go-to financial-markets guy.

I don`t know if the reasoning for a hawkish hike will turn out to be right, but the hypothesis sounds plausible. Here is what I am watching after the announcement:

Watch this space. Just keep in mind that Warren Buffett stated in a recent CNBC interview that interest rates are the biggest factor in stock market returns: “If these rates were guaranteed to stay low for 10, 15 or 20 years, then ‘the stock market is dirt cheap now’.”

9 thoughts on “A dovish or hawkish rate hike?”