All eyes on policy makers – Humble Student of the Markets

Mid-week market update: As we wait to see if the stock market can break either up or down out of this narrow trading range, this week has been a light week for major market moving economic data, However, there are a number of political and non-economic developments to keep an eye on.

The Fed gets hawkish

Early in the week, we heard hawkish Fedspeak from a number of officials. San Francisco Fed president John Williams reiterated his “docking the boat” metaphor to emphasize that the effects of monetary policy operates with a lag, and therefore the Fed is unlikely to alter its course of rate normalization:

When you’re docking a boat in Sydney Harbour, the San Francisco Bay, or elsewhere, you don’t run it in fast towards shore and hope you can reverse the engine hard later on. That looks cool in a James Bond movie, but in the real world it relies on everything going perfectly and can easily run afoul. Instead, the cardinal rule of docking is: Never approach a dock any faster than you’re willing to hit it. Similarly, in achieving sustainable growth, it is better to close in on the target carefully and avoid substantial overshooting.

New York Fed president Bill Dudley, who is a member of the FOMC triumvirate of Yellen, Fischer, and Dudley, cited loose financial conditions as a reason for the Fed’s continued tightening path despite tame inflation and inflationary expectations:

As I see it, financial conditions are a key transmission channel of monetary policy because they affect households’ and firms’ saving and investment plans and thus influence economic activity and the economic outlook. If the response of financial conditions to changes in short-term interest rates were rigid and predictable, then there would be no need to pay such close attention to financial conditions. But, as we all know, the linkage is in fact quite loose and variable. 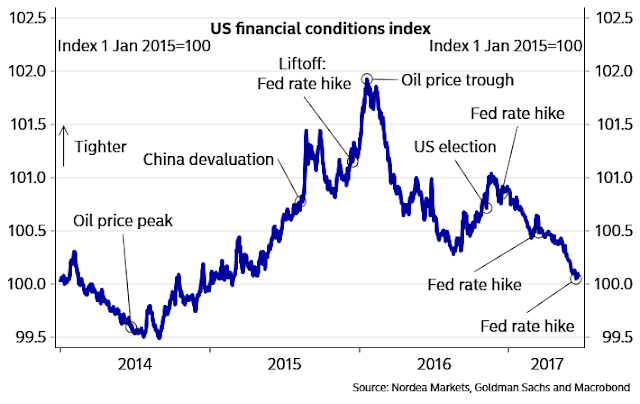 As the New York Fed operates the desk that trades with the market, Dudley’s views of market conditions undoubtedly has a high degree of influence on the discussions within the FOMC.

Across the Atlantic, ECB President Mario Draghi spoke at Sintra and stated “the threat of deflation is gone and reflationary forces are at play”. That remark was interpreted as a hawkish signal that the ECB is getting ready to begin normalizing monetary policy sooner than expected.

After the markets convulsed on Draghi’s remarks and the surge in the EURUSD exchange rate, ECB officials walked back Draghi’s comments and announced that they had been misinterpreted (via Bloomberg):

Draghi’s speech at the ECB Forum in Sintra, Portugal, was intended to strike a balance between recognizing the currency bloc’s economic strength and warning that monetary support is still needed, said the officials, who spoke separately and who asked not to be named as internal discussions are confidential. Vice President Vitor Constancio scrambled to set the record straight, saying the remarks were “totally” in line with existing policy and the response by investors was hard to understand.

Notwithstanding the short-term path of the ECB`s path for monetary policy, global central banks are slowly removing accommodation. The big question for investors is how the markets are likely to react in 2018 when it becomes clear that both the Fed and ECB are tightening.

Another piece of non-economic news hit the tape on Tuesday when the EU hit Google with a €2.4 billion for anti-competitive practices in search (see details of the case from Business Insider). GOOG, GOOGL, and QQQ cratered as a result of the ruling and tested its 50 dma, but it was not enough to push the SPX out of its trading band.

The first is the expected Senate vote on its version of national healthcare to replace the Affordable Care Act (“Obamacare). This is not the space to discuss the merits or demerits of the plan. The point is that the Republicans have little room to maneuver with a razor-thin majority of 52-48. There are already 4-5 Republican senators are have publicly indicated their lack of satisfaction. A couple may be able to be peeled back with a tweak to the bill, but some opposition appears fundamental and principled. The nonpartisan CBO is expected to publish their evaluation, which includes a forecast of the impact on the deficit.

If the Senate cannot pass a healthcare reform bill, it will raise more doubts about the broader economic legislative agenda. In addition to the agenda, there are important maintenance measures that need to be taken by the end of Q3, namely the debt ceiling needs to be lifted (or abolished) and spending authorization (budget) needs to be granted before the start of the new fiscal year (October 1). Skepticism that tax reform and infrastructure spending measures can be adopted that will boost growth in the way the was previously suggested is a weight on medium and long-term US yields (while the short-end remains anchored by Fed policy). Lower US yields, in turn, are a drag on the dollar.

At the time of this writing, it is unclear whether the Senate’s healthcare bill will get passed as Senator Majority Leader Mitch McConnell delayed a vote on the bill, indicating a lack of support. FiveThirtyEight interpreted the intent of the bill not so much just an Obamacare repeal bill, but as a tax cut bill with an underlying conforming with the conservative policy of less government:

I’d posit a simpler idea: This bill is exactly what McConnell wants because it’s right in line with his long-term goals. As Bloomberg’s Francis Wilkinson points out, the BCRA “will transfer hundreds of millions of dollars from poor and middle-class people, in the form of health care, to rich people in the form of tax cuts.” To be more specific, the bill would cut Medicaid spending by $772 billion over 10 years, according to the CBO, and reduce health care tax credits by about $408 billion. It would also reduce taxes and penalties by more than $700 billion, mostly in the form of “repealing or modifying tax provisions in the ACA that are not directly related to health insurance coverage, including repealing a surtax on net investment income and repealing annual fees imposed on health insurers.”

To put it another way, the BCRA is less a health care bill than a tax cut (that will mostly benefit the wealthy), coupled with a trillion-dollar-plus reduction in federal government spending on health care (that mostly benefited the poor and the sick). Those goals — lowering taxes on the wealthy, trimming the welfare state, and reducing the size of government — are at the core of Ronald Reagan’s philosophy of movement conservatism, and they’ve been the primary axis of political conflict between Democrats and Republicans for most of the past several decades.

Here is a chart that simplifies the fiscal effects in graphical form (via Diogenes). 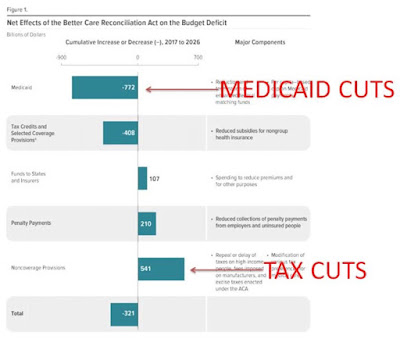 There are two issues for the markets. First, will the promised Trump tax cuts will ever see the light of day? This bill is the first test. For now, the market remains skeptical as the basket of high tax companies are underperforming the SPX. 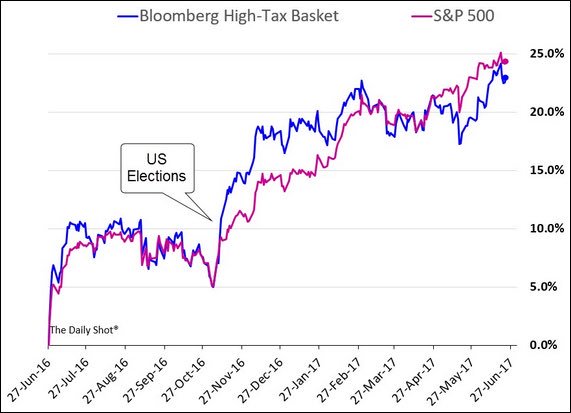 As well, the decline in NASDAQ stocks had been partially offset by strength in Healthcare and Biotech. As hopes for a rapid resolution of BRCA fades, what happens to this sector and what happens to market leadership?

In addition, Marc Chandler also cited the threat of protectionism as a potential negative for the equity market:

The other important event that will not be on economic calendars is the expected announcement of the results of the investigation begun in April of the threat to US national security by steel imports. It seems there is a foregone conclusion to the investigation. Commerce Secretary Ross, who led the investigation, recognized that the law gave him 270 days for the investigation, but insisted all he needed was 90 days, which brings us to the end of June. The political dynamics warn that the more that the Trump Administration feels frustrated by Congress and the judiciary, the more that it may feel compelled to act forcefully where it has discretion.

The risk is the Trump Administration’s protectionist policies that could lead to a trade war. The environment is turning dark, as the Commerce Department slapped additional duties on Canadian softwood lumber (see CNBC report). The next shoe to drop is steel. These developments stand in stark contrast to Politico’s report of an imminent EU-Japan free trade agreement.

So far, the market remains on edge as a result of this uncertainty. However, I am still waiting for some definitive verdict of a technical break before making a definitive trading decision on possible market direction.