Things you don’t see at market bottoms, 29-Jun-2017 – Humble Student of the Markets

I have stated that while I don’t believe that the stock market has made its final cyclical top, we are in the late stages of a bull market (see Risks are rising, but THE TOP is still ahead). Nevertheless, psychology is getting a little frothy, which represent the pre-condition for a major top.

As a result, this is another post in an occasional series of lists of “things you don’t see at market bottoms”. This week, I focus on the theme of “subprime is the new black”:

Subprime is the new black
Just when you thought that subprime lending was dead and buried, it has come back to life. The Argentina 100-year bond deal showed how yield starved the market is.

Indeed, the stretch for yield has prompted issuers to take advantage of the easier credit environment. As the chart below shows, the percentage of covenant light loans has been rising steadily since 2010 and cov-lite loans are now the norm.

Here is another sign that investors are stretching to get more yield, JP Morgan observed that Santader Consumer USA priced a deep subprime auto loans ABS deal where 84% of the loans are to borrowers with unverified income (via Tracy Alloway). 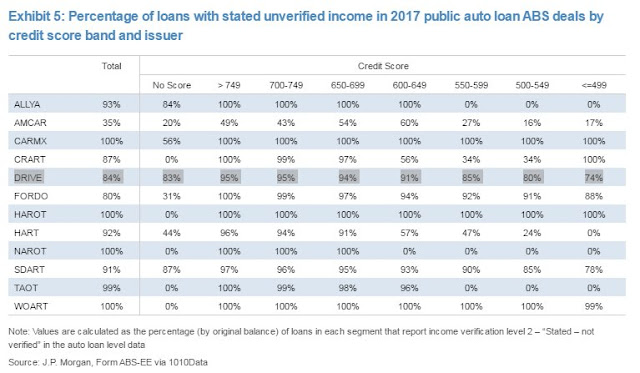 In case you were wondering, the AALYA deal on the first line is another Santander issue.

A start-up for customers with no money
If “irrational exuberance” is defined as equity investors throwing caution to the winds, what do you call the excessive consumer risk-taking behavior? The following news item recently came across my desk (via Tech Crunch):

If you’re looking to buy something, but don’t want to pay for it yet, Blispay thinks it has the solution for you. The start-up works with small and mid-sized businesses to help retail customers defer payments for six months…

If someone walks into a participating store and wants to make a purchase of at least $199 without paying anything upfront, they can sign up on the Blispay app in 2–3 minutes and once they submit the form they will find out if their credit is approved within 15–20 seconds. They can then take the item home without any payments or any interest for six months, while also getting 2% cash back. Blispay makes money off customers who don’t end up paying for the item when the six months comes around and then they are subject to 19.99% interest.

But as far as the businesses are concerned, it costs them nothing more than the roughly 3% credit card processing fee that they would be paying Visa anyway. Blispay allows businesses “to leverage technology in a way that makes it efficient and affordable to service a far broader swath of a merchant base,” said Lisiewski.

File this as another item under “things you don’t see at market bottoms”.

Time for the Fed to get “unpredictable”?
Alan Greenspan biographer Sebastian Mallaby recently penned an Op-Ed in the WSJ to address the problem of excessive risk taking by staying unpredictable and ambushing the markets once in a while:

With every passing month, the U.S. economy feels, ominously, more like it did in 1999 and in the mid-2000s. Both were times when a promising mix of full employment, low inflation and buoyant spirits gave way to a financial convulsion that triggered a recession. Unfortunately, the Federal Reserve under Janet Yellen is ignoring a relatively painless policy that would reduce the danger of a sequel…

A different debate could help the Fed out of this bind. Even if Ms. Yellen’s current, rather gradual pace is appropriate, the Fed can reduce the odds of a financial bust by tweaking the manner of its tightening.

To do so, the Fed should examine a tenet of the central-banking faith: that transparency is always virtuous. By being less transparent—and reserving the option of deliberately ambushing investors with a shock move—the Fed could discourage them from taking too much risk.

Such an ambush would unsettle markets, to be sure; but that would be the point. The painfully learned lesson from the late 1990s and mid-2000s is that excess financial serenity leads to excess risk-taking, which in turn increases the chances of a blow-up. In the first case, that meant the tech bust of 2000; in the second case, it meant the planet-shaking subprime-mortgage meltdown. Since market convulsions caused the last two recessions, reducing the probability of the next one must be a Fed priority.

In effect, Mallaby was echoing what Mark Carney said at Jackson Hole in 2009 about policy transparency at central banks:

How central banks communicate can influence the degree to which low, stable, and predictable inflation fosters excess credit growth. It is important that markets understand how a central bank formulates policy, but that does not equate to perfect foresight. Differences in judgment and the fundamental uncertainties surrounding the economic outlook should mean occasional differences in view. These should be particularly marked during turning points in the economic cycle. As the review of liquidity cycles suggests, wider “markets” in expected economic outcomes (which would mean greater short-term volatility) could promote long-term financial stability.

The alternative would be to generate price instability to prevent financial instability. That is, the price objective might have to become less stable in order to disrupt the endogenous liquidity creation that comes from relatively stable, predictable rate paths.16 This, rather than a higher inflation rate (if reliably achieved), would appear necessary to disrupt the dynamics described earlier.

Instability can be a source of stability.