I have stated that while I don’t believe that the stock market has made its final cyclical top, we are in the late stages of a bull market (see Risks are rising, but THE TOP is still ahead and Nearing the terminal phase of this equity bull). Nevertheless, psychology is getting a little frothy, which represent the pre-condition for a major top. This is just one post in a series of “thing you don’t see at market bottoms”. Past editions of this series include:

It is said that one of the signs of a market top is when participants (and scam artists) start making wild claims for the future. Here are some examples:

It is said that the magazine headline is a sign of a market turning point. When popular magazines write a story, it usually indicates the end of a trend. So it was with some surprise when I read that USA Today breathlessly proclaimed that Millennials’ fear of stocks could cost them $3.3 million.

Here is the graphic that goes with the analysis. 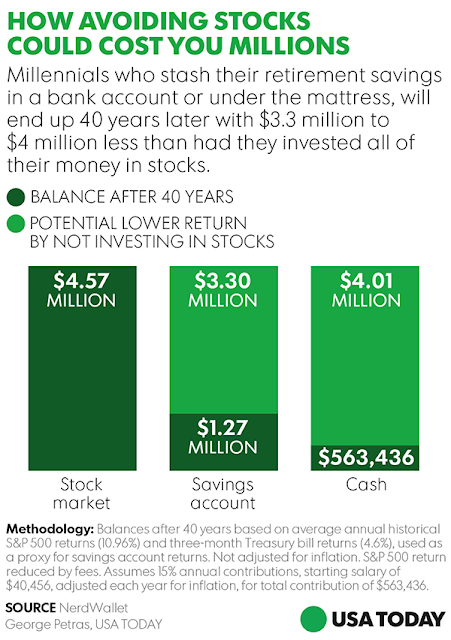 This study reminds me of the old days when a corporate treasurer would hire an actuarial consultant to evaluate the company`s defined benefit plan. The discussion would go something like this. “The assets of the pension plan is $X. Make it work so that we don’t look under-funded.” The actuary would then feel pressured to make unrealistic return assumptions in order to “make it work”.

If you read the fine print, the USA Today return projections are laughable. They are based on the historical returns of 4.6% on 3-month T-Bills and 10.96% returns on equities. Someone please tell me where I can find a 4.6% return on a T-Bill. Then explain the market implications of such an environment. It would take a highly aggressive Fed for the T-Bill yield to reach 4.6%. Moreover, the following FactSet chart of forward P/E ratios shows that current forward P/E levels are highly elevated compared to its own history. In effect, some of the past returns for the equity asset class can be attributable to multiple expansion. Can we realistically expect a similar level of P/E expansion in the future? If so, what does that mean for interest rates (and is that consistent with a 4.6% T-Bill yield)? 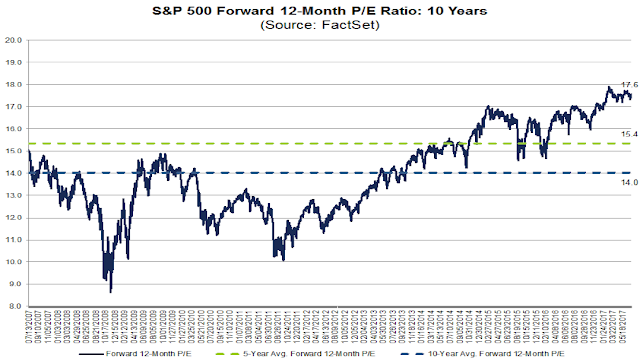 To realistically achieve a return of 11.0% on equities, the market would need a downdraft of 50-70% in equity prices. To get to a 4.6% T-Bill yield, interest rates would have to rise dramatically.

In support of its Chinese offshore property business, Juwai recently projected that Chinese investors will spend USD 1 trillion on offshore real investment in the next 10 years (via Huffington Post Canada):

Toronto and Montreal have surpassed Vancouver as the Canadian cities that Chinese homebuyers are most interested in, according to data from Juwai, China’s largest real estate portal.

The company predicts that Chinese investors will pour some $1 trillion (C$1.27 trillion) into real estate around the world over the next decade, of which a considerable amount is likely to land in Canada. The country is the fourth-largest destination for Chinese real estate investment, behind the U.S., Australia and Hong Kong. 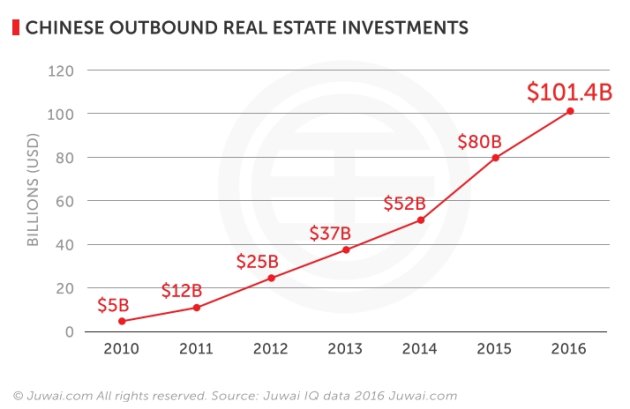 It’s not that hard to project trends into the future. There are signs of a voracious Chinese appetite for American real estate. The Avison Young Q2 review of Manhattan commercial real estate reported that Chinese interests had accounted for roughly half of large scale property transactions:

Increasing foreign capital is redefining the City’s buyer pool, with a particular affinity to the trophy asset class. Chinese capital has accounted for half of the total dollars invested since the beginning of 2017, which has helped buoy market volume and pricing. Threatening a strong market rebound are the capital controls from the Chinese government, rising interest rates, the wall of maturing CMBS debt originated around the 2007 peak, and e-retail’s war on brick and mortar stores.

Christine Duhaime, a Canadian lawyer who specializes in money laundering issues, recently estimated that about $2 trillion in corruption proceeds had been spirited offshore from China, most of which went into property investments.

Is this the start of a trend of outbound Chinese fund flows? Or does this feel like past episodes of hubris, such as:

A sucker born every minute

In the meantime, the British Columbia Securities Commission has warned about anyone raising funds with the so-called “Vancouver Stock Exchange Corp” (via Global News). 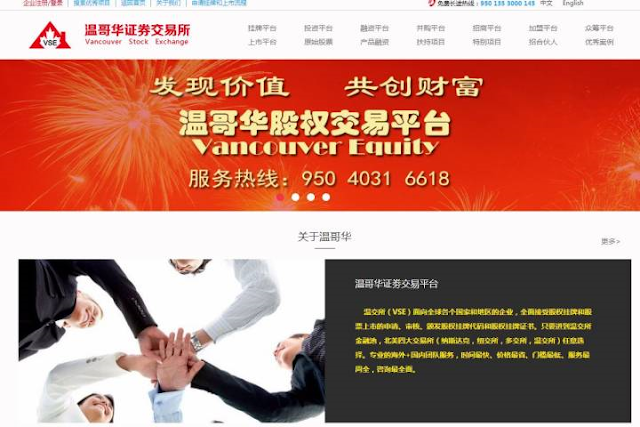 The Vancouver Stock Exchange (VSE) was merged with the TSX in 1999 and its functions were primarily taken over by the TSX-Venture Exchange. The VSE no longer exists. The new “Vancouver Stock Exchange Corp” (VSEC) has an office in Kitimat, BC, and in Shenzhen, China. For readers who are unfamiliar with Kitimat, here is a map of British Columbia, with Vancouver and Kitimat shown, to illustrate the remoteness of the VSEC office. 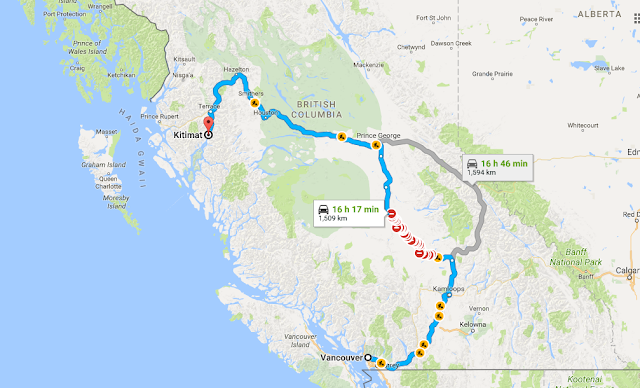 In the current environment, get-rich-quick speculators are crawling out the woodwork. The following tweet is an antidote to the USA Today’s story on under-invested millennials.

This will not end well, but…

Bullish sentiment excesses that I have cited in this and past posts represent a “this will not end well” investment story. But sentiment doesn’t function well as precise market timing tools. For now, the nowcast of short-term indicators such as initial jobless claims remain bullish… 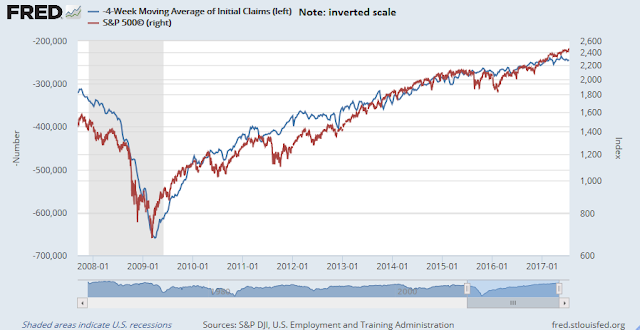 So does forward EPS estimate revisions (via FactSet). 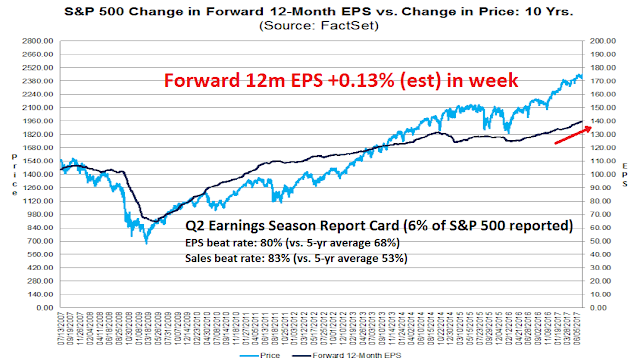 At the same time, investors should recognize that overall risk levels are rising and react accordingly, depending to their own investment time horizon.