The things you don’t see at market bottoms, bullish bandwagon edition – Humble Student of the Markets

I have stated that while I don’t believe that the stock market has made its final cyclical top, we are in the late stages of a bull market (see Risks are rising, but THE TOP is still ahead and Nearing the terminal phase of this equity bull). Nevertheless, psychology is getting a little frothy, which represent the pre-condition for a major top.

As a result, this is another post in an occasional series of lists of “things you don’t see at market bottoms”. This week, I focus on the theme of further signs of the bullish bandwagon.

To summarize, Callum Thomas of Topdown Charts constructed a Euphoriameter, consisting of forward P/E, VIX (inverted), and bullish sentiment. Readings are highly elevated, though they have not reached the highs seen at the last cycle top. 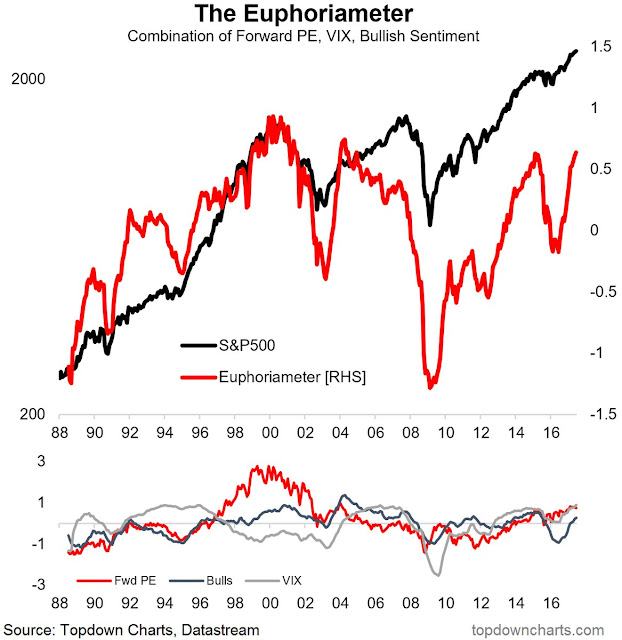 In addition, the BAML Sell Side Indicator, which measures the asset allocation of Street strategists, has proven to be a good contrarian indicator. Currently, Street bullishness is surging, and BAML strategist Savita Subramanian wrote, “The recent inflection from skepticism to optimism could be the first step toward the market euphoria that we typically see at the end of bull markets and that has been glaringly absent so far in the cycle.” 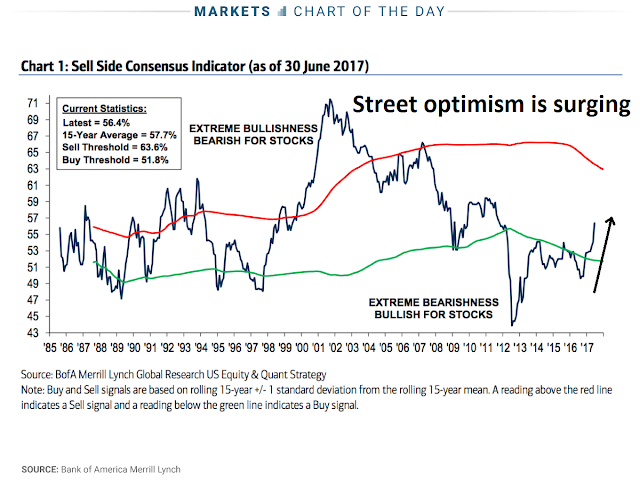 I agree. Just like the “Euphoriameter”, readings are rising and highly elevated, but it is too early to declare this a contrarian sell signal just yet.

Bob Shiller, who developed the CAPE valuation metric that shows stock markets to be richly priced, stated in a CNBC interview that upside potential is up to 50% from current levels. He did, however, qualify that remark:

Stocks are “highly priced now, which means I don’t expect them to outperform so much,” he said. “But for a long-term investor and most people are, I think there should be a place for stocks in the portfolio and they could go up a lot from where they are now … they could also go down.”

Retail investors jump on the bandwagon
There are other indications that the retail investor is jumping on the bullish bandwagon. The latest AAII asset allocation survey shows that equity allocations are at levels not seen since 2005. The asset allocation survey is not to be confused with the weekly AAII opinion survey. The former asks what people are actually doing with their money, compared to their opinion of the markets, whose survey results can be volatile and move around from week to week.

Stock and stock fund allocations rose by 1.4 percentage points to 68.8%. This is the largest allocation to equities since April 2005 (70.3%). June was the 51st consecutive month that equity allocations were above their historical average of 60.5%.

T-D Ameritrade does a similar survey of their client accounts to determine the level of retail investor optimism about the stock market. The June survey results have not been released yet, but the latest May readings show that bullishness is highly elevated, though they are not a record levels. 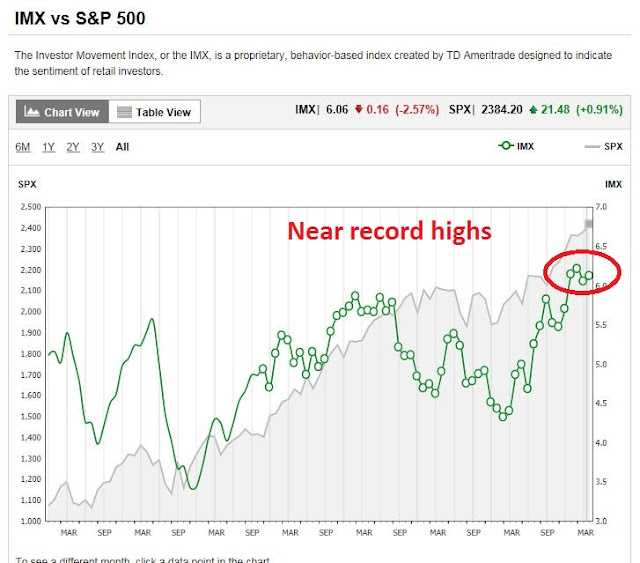 And finally, there is this tweet from Ben Carlson.

3 thoughts on “The things you don’t see at market bottoms, bullish bandwagon edition”