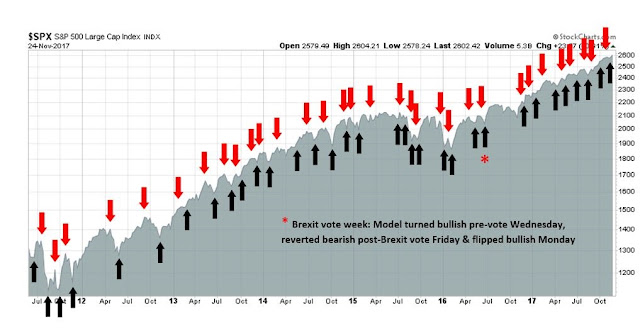 I received a considerable amounts of feedback to my post last week (see 2018 outlook: Last charge of the bulls) over my comments about the risks posed by a flattening yield curve. Interest in the term “flattening yield curve” has spiked, but consistent with levels last seen when the yield curve flattened to this level. 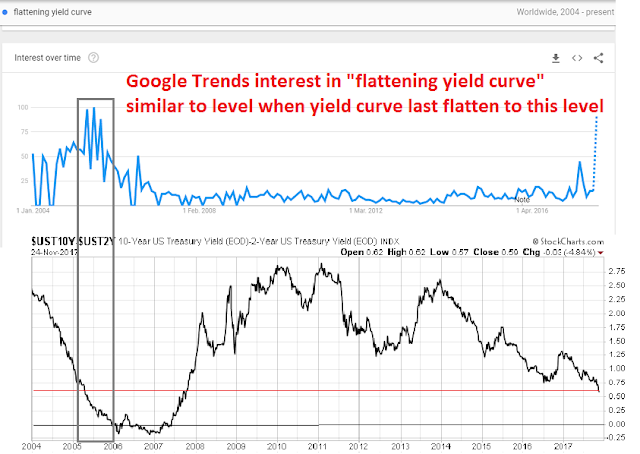 I agree 100%. The more the authorities pay attention to a metric, the less the metric matters. In some instances, the metric can be gamed, just like China’s regional GDP growth statistics.

Even though an inverted yield curve has been an uncanny leading indicator of recession, it may not work this time because of the effects of the Fed’s quantitative easing (and now quantitative tightening) program on the bond market. Indeed, the Fed’s own estimates showed that its QE programs had pushed the 10-year yield down by 100 bp, which had the effect of manipulating the shape of the yield curve. 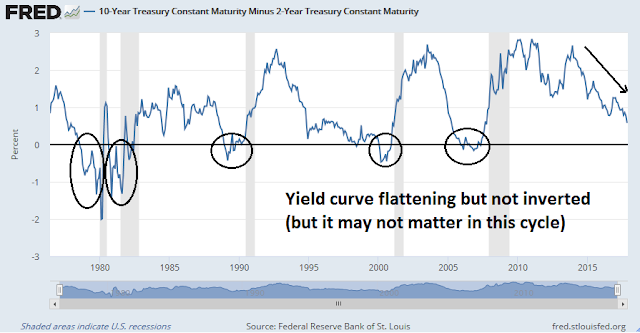 There are sufficient contrary indicators that the economy is booming, and the near-term odds of a recession is low. Those conditions are consistent with my belief that the stock market is undergoing a terminal blow-off phase, but Scott Grannis’ work also hint at how investors might look for signs of a market top.

Investors can embrace the blow-off, but I can also offer you some risk control techniques that can act as a kind of stop-loss discipline.

The yield curve is not a red flag

Scott Grannis recently outlined a well reasoned thesis of why investors should not be overly concerned about the flattening yield curve. Cutting to the chase, here is his conclusion:

In his post, Grannis pointed out that financial conditions are loose. 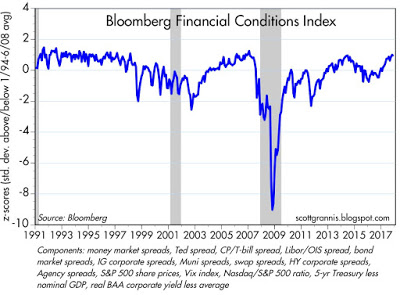 Even though the yield curve is flattening, past recessionary episodes have been preceded by a positive and rapidly rising real Fed Funds rate. 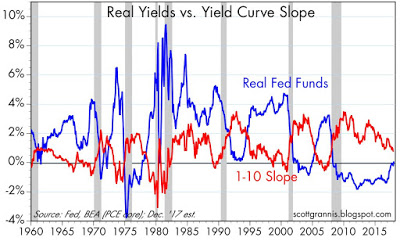 In summary, Grannis is arguing that monetary conditions are far from tight. In the past, it has been tight monetary policy that has cooled growth and plunged the economy into recession. Today, the economy is booming, liquidity is plentiful, inflation is tame, and inflationary expectations are muted. We live in a not-too-hot and not-too-cold Goldilocks period. Therefore equity investors should not get overly bearish.

I agree, to a certain extent. Here is where we differ. My scenario calls for rising inflationary pressures to appear soon, which would cause the Fed to become far more hawkish than market expectations (see 2018 outlook: Last charge of the bulls). Nevertheless, Grannis’ analysis reveals some clues of what to look for in as a top develops.

How to watch for the Top

Here is what I am watching. These signals can be divided into two categories. The first would indicate that tighter monetary conditions are starting to have a significant negative effect on either the economy or the markets. 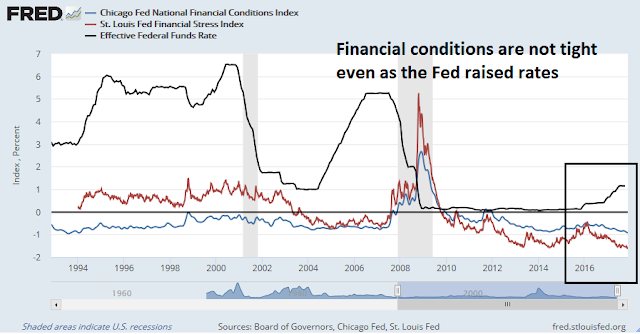 As financial conditions are historically correlated with the VIX Index, one real-time indicator of tightening liquidity might be the VIX. 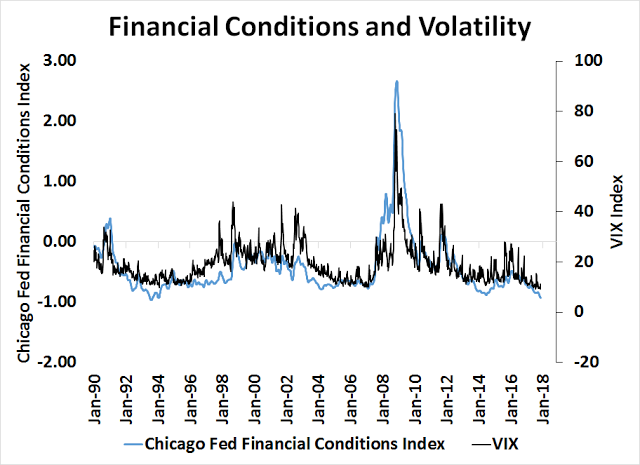 The lack of volatility is not just restricted to the VIX Index, which measures equity volatility. Callum Thomas at Topdown Charts pointed out that low bond volatility is also a characteristic of a late cycle expansion. A rise in the MOVE Index could also be a signal that the market could be topping (annotations in red are mine). 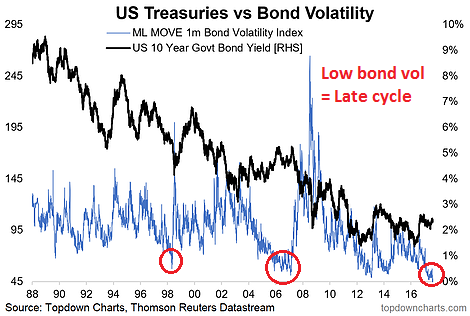 As the Fed normalizes monetary policy, money supply growth has tended to decline in response to tighter conditions. Watch for real money growth to go negative. The latest readings show that YoY real M2 growth at 2.7% and decelerating. 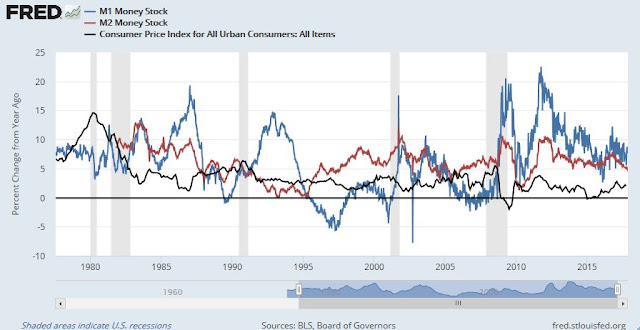 Grannis pointed out that past yield curve inversions have been accompanied by a positive and rising real Fed Funds rate. We are not there yet. 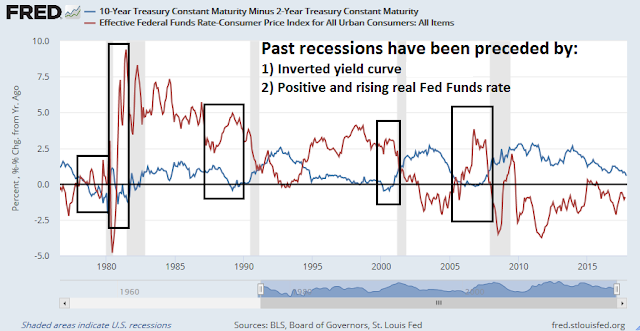 From a technical perspective, I am watching for signs of faltering momentum as a warning of a market top. The current macro environment is showing strong fundamental and price momentum. The latest update from John Butters of FactSet indicates that forward 12-month EPS continues to rise strongly, which is an indication of fundamental momentum. 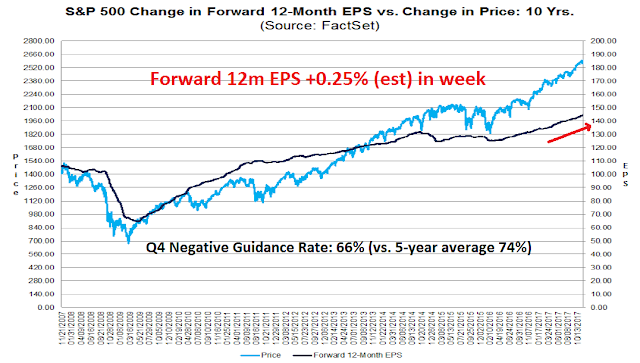 The market has been dominated by a risk-on bias. The Relative Rotation Graph (RRG) chart by style shows that leadership has been shown by high beta stocks, such as small caps, growth, and momentum stocks. 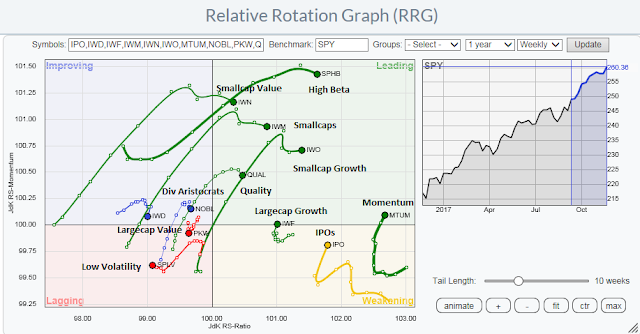 The relative performance of different flavors of price momentum factors is also strong, as measured by MTUM and PDP.

From a sector perspective, leadership is dominated by technology, as inflation hedge groups such as mining and golds starting to falter. 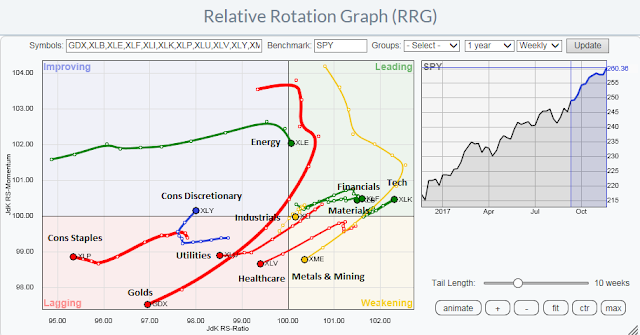 The technology driven momentum has the fundamental potential to continue for a few more months. Brian Gilmartin, writing at Seeking Alpha, observed that much of the sector is driven by the iPhone cycle, which has the potential to be positive in Q1.

The tech sector could see a “binary” year, with strong growth in the first half of 2018 and slower growth in the 2nd, with the variable being how “super” the iPhone SuperCycle turns out to be.

Another way of showing this for readers is to show Apple’s fiscal ’18 and ’19 EPS estimates and expected growth: 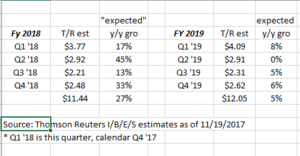 Note that estimated YoY growth in Q4 is still strong. Q4 earnings are reported during Q1, which has the potential to create a tailwind for technology stocks during that period.

BAML quantitative strategist Savita Subramanian found that this kind of growth and momentum driven leadership is typical of the behavior in a late stage bull market. 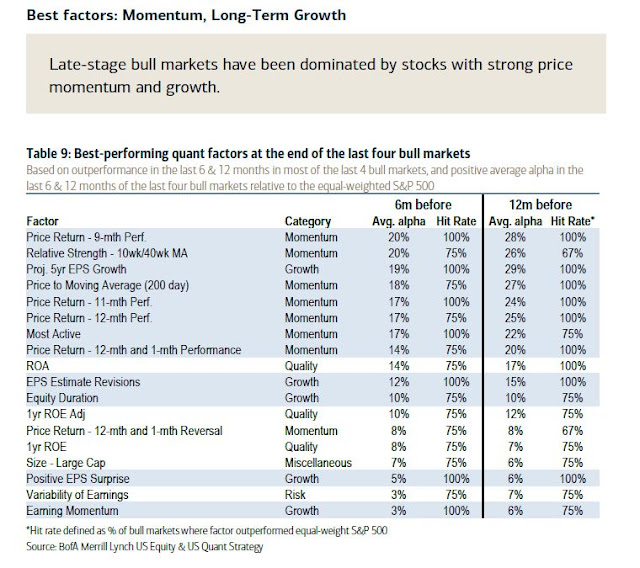 However, some caution may be warranted in making too large a bet on price momentum. Topdown Charts recently pointed out that price momentum is highly extended on a global basis. 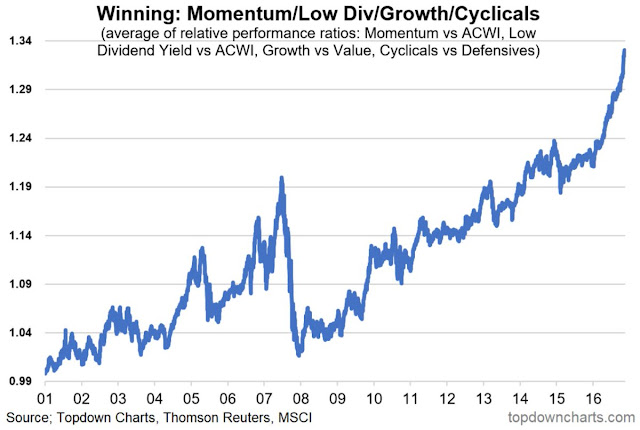 On the other hand, just because a market is overbought does not mean that it can`t become even more overbought. BAML`s Subramanian observed that the terminal stage of a market bull usually shows the best performance. 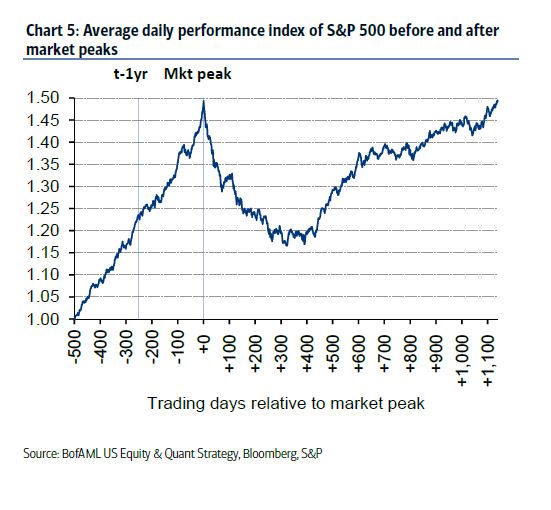 Her analysis suggests that this bull may have some upside left before it gets exhausted. 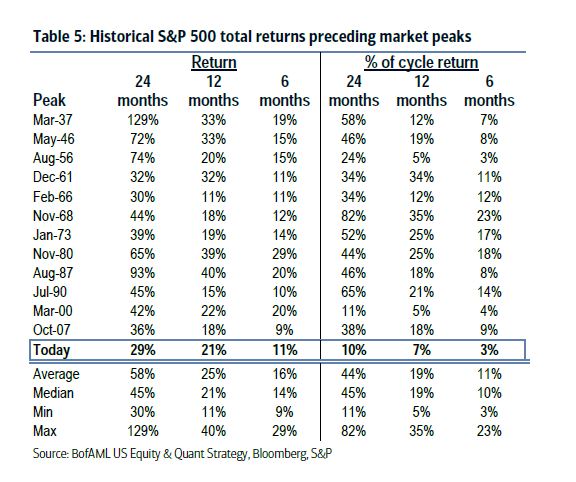 Embrace the Dark Side, buy growth and momentum.

Looking to the week ahead, the outlook appears to be mixed. Subscribers received an email alert that my trading account had taken profits on all of its long positions and moved to 100% cash because of the event risk posed by the upcoming vote next Thursday on the GOP tax bill. The market was not overbought, but the lack of bullish follow through was disturbing for the bulls, and these readings could be indicative of a short-term top. 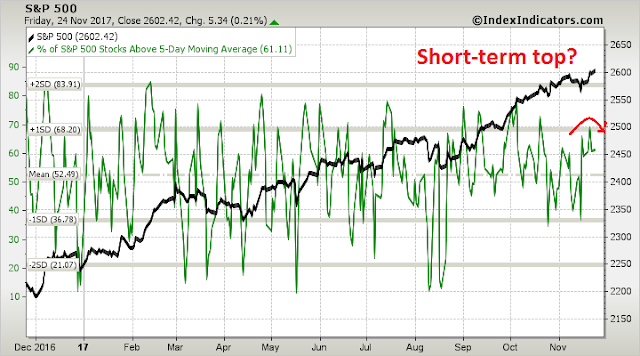 Schaeffer’s Research also found that the week after Thanksgiving has historically shown a minor bearish bias, at least until Friday.

However, should the market rise next week, the odds are much better for stock prices in the next three months. 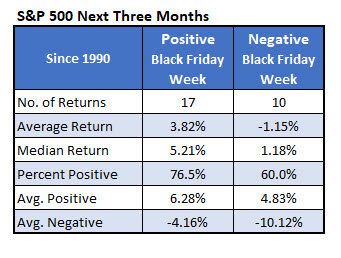 My inner investor remains constructive on stocks. He is neutrally positioned with his asset allocation at his investment policy target weight. My inner trader took profits on Friday, but he is still intermediate term bullish. He is hoping for a pullback next week so that he can buy in at lower prices. His positioning is consistent with the observation from Callum Thomas of the market seasonal pattern of a brief period of consolidation in late November and early December, followed by a rally into the year end. 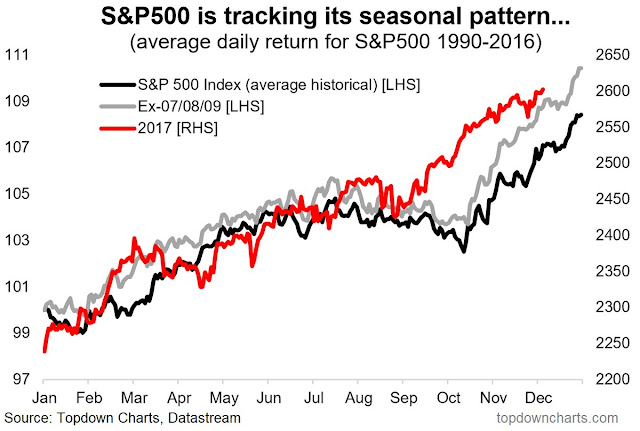