Round number-itis at SPX 2600? – Humble Student of the Markets

You can tell a lot about market psychology by the way it reacts to news. Early Monday morning (Europe time) and before the market open, a grim Angela Merkel announced that coalition talks had collapsed, and she was unable to form a government. DAX futures instantly took a tumble, and so did US equity futures. Over the course of the European trading day, equity prices recovered and the DAX actually closed in the green. US stocks followed suit and closed with a slight gain. This was a signal that the market has a bullish short-term bias.

I issued a tactical “buy the dip” trading call for subscribers last Friday. Now that the SPX has risen to test resistance at 2600, which represents an all-time high, is it time to sell the rip?

There are plenty of reasons to be cautions. Credit markets, as measured by the relative price performance of high yield (HY), investment grade corporate bonds (IG) and emerging market (EM) bond prices against their duration-equivalent Treasury benchmarks, have recovered smartly from the risk-off episode last week, but they are still showing a negative divergence as equities test all-time highs.

Similarly, the market is also showing a negative divergence on RSI-5 and RSI-14. 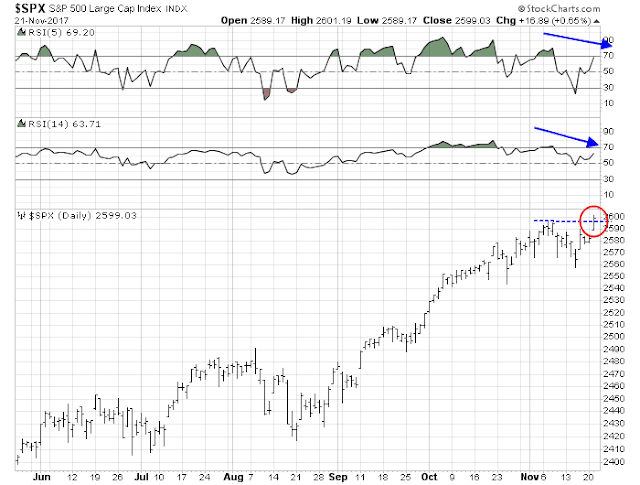 As Americans recover from their Thanksgiving long weekend next week, one market risk that could appear is the looming December 9 deadline for a Continuing Resolution (CR) to fund the federal government. That’s because the Republican leadership has been spending so much effort on their tax bill that little attention has been given to the CR that funds the government. Writing in Forbes, here is how Steve Collendder (@thebudgetguy) sees the situation:

Congressional staff, lobbyists and reporters all cheered when the current continuing resolution — the law that’s keeping the government’s lights on while Congress figures out what to do about the fiscal 2018 spending bills — was drafted so it would expire on December 9. They all figured the early-in-December deadline meant they could make relatively secure plans to be out-of-town for the holidays.

I sure hope they didn’t get nonrefundable tickets.

The GOP’s efforts to enact a tax bill by President Trump’s arbitrary and nonsensical Christmas 2017 deadline has made it almost certain that Congress will be in session until close to the end of December. That, in turn, virtually guarantees that the (hopefully) final funding decisions for the year also won’t be made until the end of the month.

That will wreak havoc with holiday schedules. It could also mean there could be a federal government shutdown by January 1.

In addition, Politico reported that Congress speeds towards a shutdown over Dreamers, with the CR as the leverage that the Democrats holds over the Republicans.

Will the market get spooked over the a government shutdown and possible Treasury default in January?

On the other hand, stock prices are enjoying a period of positive seasonality and strong momentum.  The Wednesday before and Friday after Thanksgiving have historically leaned bullish, while Cyber Monday leaned bearish. 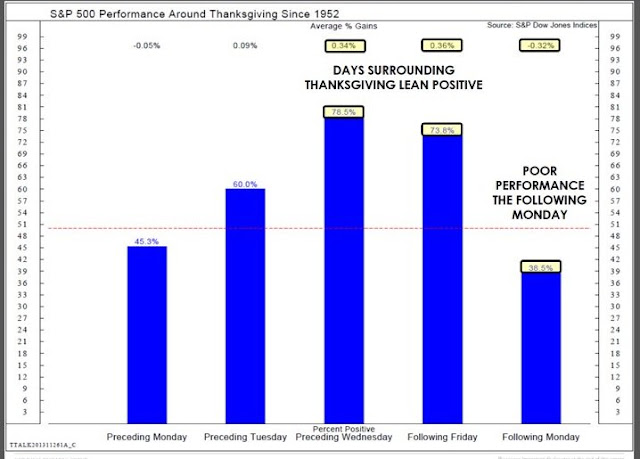 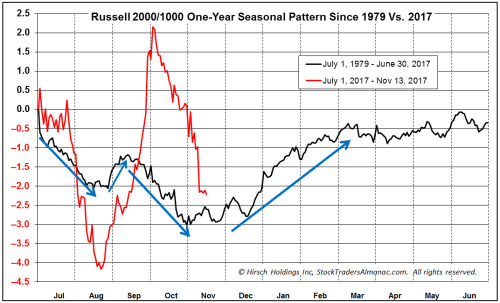 Current conditions show that high beta, tech stock driven high beta, high octane, and momentum stocks have dominated the market, and there is no end in sight. These reading suggest that, notwithstanding any short-term weakness, stock prices are likely to continue to rally into year-end. 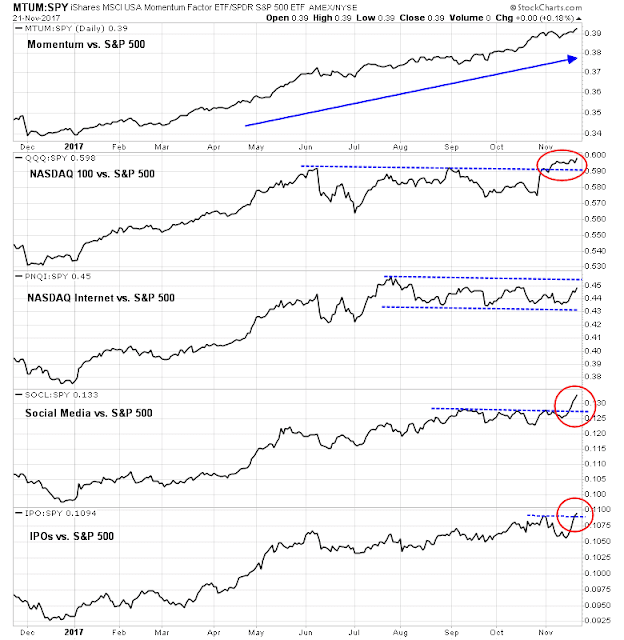 How should traders interpret this environment of strong momentum with negative divergences? I believe that a buy the dip/sell the rip is still the best short-term approach. However, short-term indicators, such as the % above the 10 dma from Index Indicators, are nowhere near overbought yet. 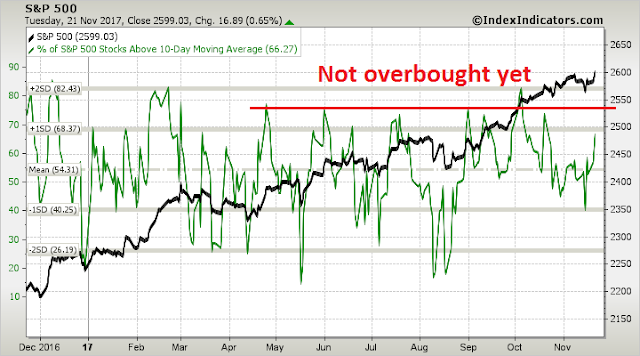 My inner trader is long the market, but waiting for short-term overbought readings to appear to take profits. With any luck, that opportunity may appear on Black Friday.