I have stated that while I don’t believe that the stock market has made its final cyclical top, we are in the late stages of a bull market (see Five steps, where’s the stumble?). Nevertheless, psychology is getting a little frothy, which represent the pre-condition for a major top. This is just another post in a series of “things you don’t see at market bottoms”. Past editions of this series include:

I reiterate my belief that this is not the top of the market, but investors should be aware of the risks where sentiment is getting increasingly frothy. Jeremy Grantham of GMO recently penned an essay calling for a market melt-up. Investors should also remember Bob Farrell’s Rule #4: “When markets go parabolic, they rise further than you think, but they don’t correct by going sideways.”

As a result, I am publishing another edition of “things you don’t see at market bottoms”, as exemplified by the mood captured by this recent magazine ad. 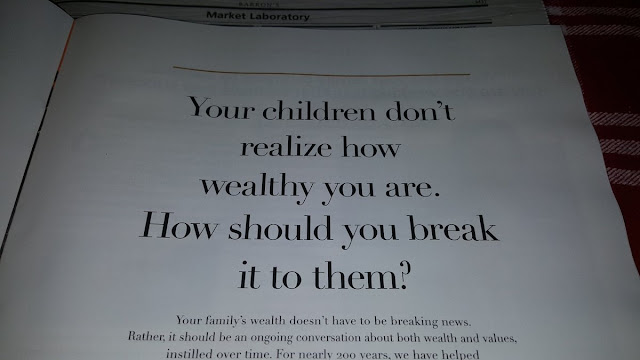 We are seeing increasing evidence of a retail stampede into stocks. The TD Ameritrade Investor Movement Index (IMX), which tracks the behaviour of TD Ameritrade customers, is an all-time bullish high. 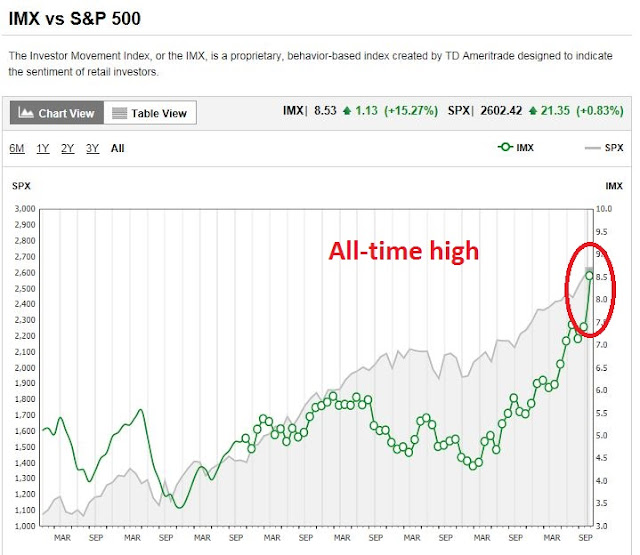 Unfortunately, the history of IMX only begins in 2010; therefore, we have no multi-cycle history of this sentiment metric. However, Charles Schwab maintains a history of client cash, and cash levels are at an all-time low. 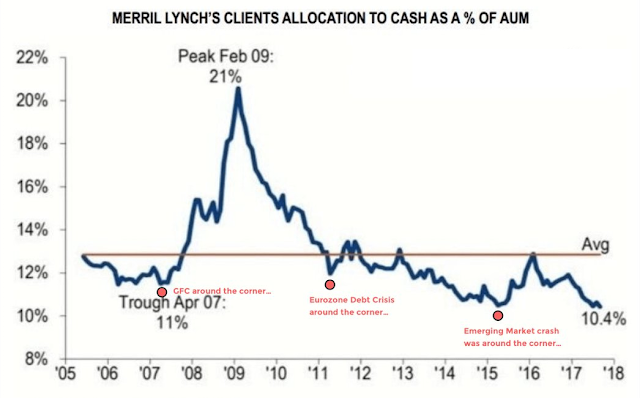 Bullish retail sentiment is also confirmed by the AAII December 2017 asset allocation survey, which found that equity allocation is at the highest since 2000. The latest level of cash at 13% is the third lowest on record. The only two other lower readings were in December 2000 (12%) and March 1998 (11%). Chart via Meb Faber: 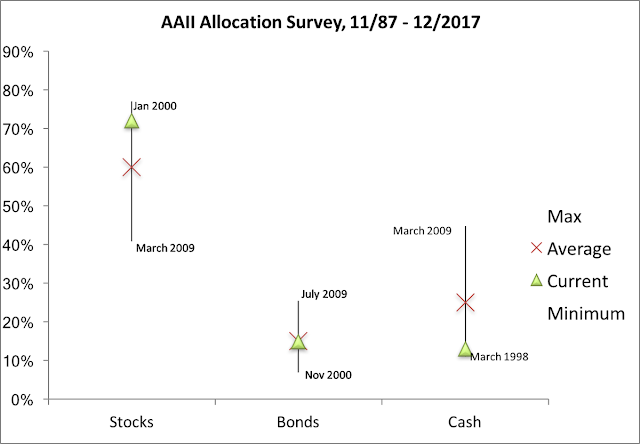 I have made the point before that excessive bullishness is a condition indicator, and not a contrarian sell indicator. A crowded long reading is only indicative of risk, and it does not necessarily mean that stock prices decline immediately.

On the other hand, investors should be afraid, very afraid, when excessive bullishness is combined with financial leverage, especially in the *ahem* more speculative parts of the market. 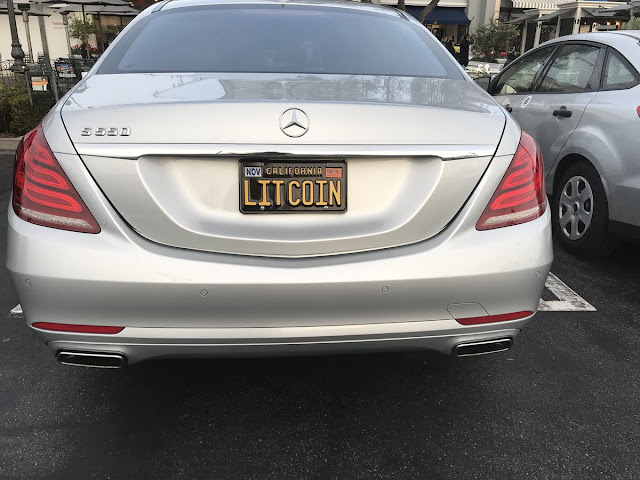 It is therefore with some trepidation that I found a cryptocurrency exchange willing to lend against crypto positions. In addition, Reuters also reported that Direxion has filed a prospectus for 2x leveraged long and short Bitcoin ETFs. The Financial Times also revealed that investors can trade Bitcoin with 15x leverage in Tokyo. 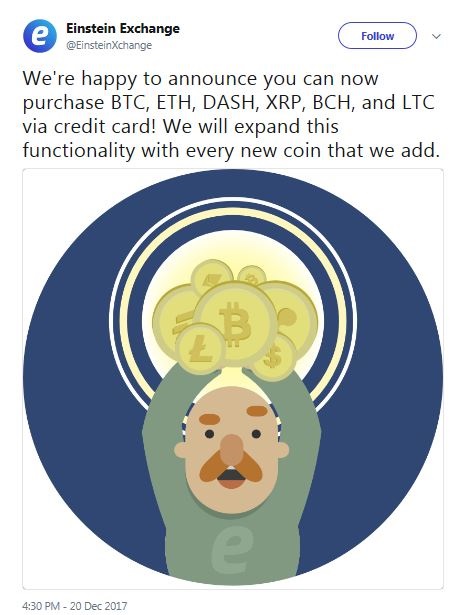 The next frontier? I am waiting for 2x and 3x leverage ETFs on weed stocks. 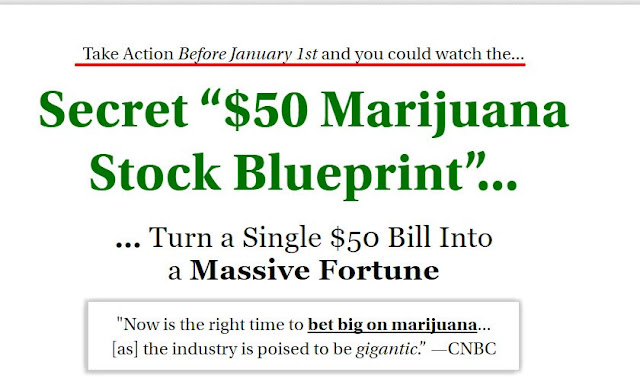 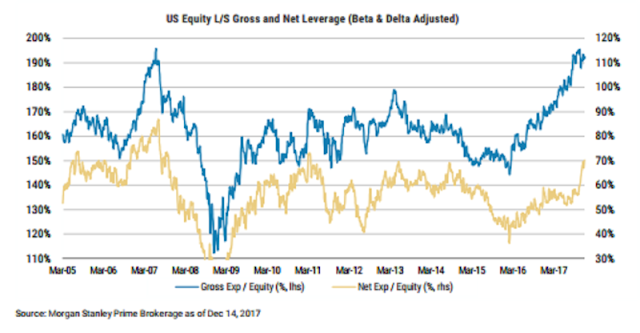 The rise in hedge fund leverage makes perfect sense. After all, the Sharpe Ratio of the SP 500 was 3.2, the second highest on record. Why not pile in while the returns are good and volatility is low? 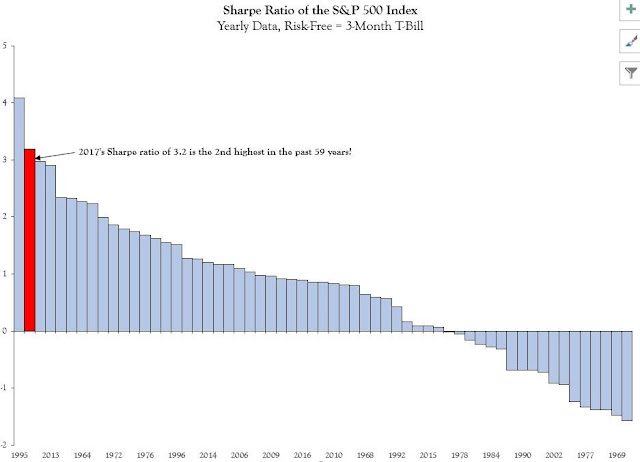 There is an expression on Wall Street, “Feed the ducks when they’re quacking.” When there is so much investor enthusiasm, bankers are creating the products to “feed the ducks”.

Callum Thomas recently pointed out that IPO activity is surging to levels comparable to the previous market peak. 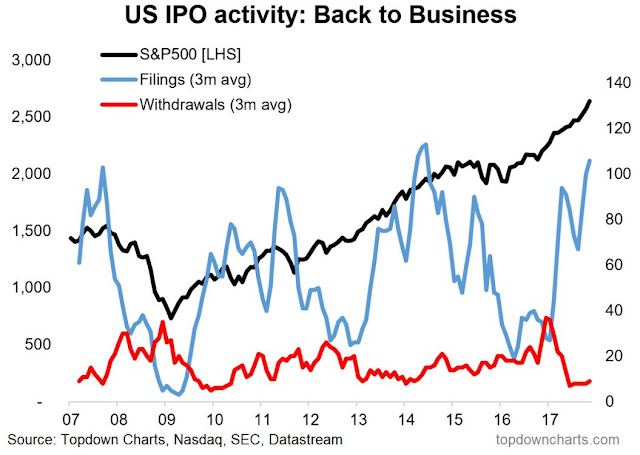 If you are looking for IPO frenzy, look no further than Hong Kong. Bloomberg reported that a recent IPO was 1,500 times oversubscribed.

Don’t get too bearish just yet

Despite these signs of froth, I would advise traders against becoming overly bearish. Surges in bullish sentiment is bullish, at least in the short run. The AAII weekly survey of investor sentiment shows fresh highs in bull-bear spread. As the chart below shows, high levels of AAII survey bullishness has been correlated with price momentum, and it cannot be interpreted as a contrarian sell signal. 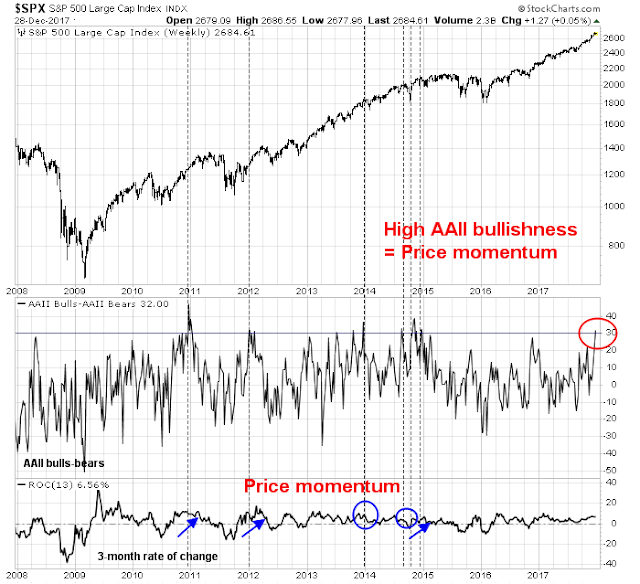 Enjoy the party. Just don’t forget Bob Farrell’s Rule #4: “When markets go parabolic, they rise further than you think, but they don’t correct by going sideways.”