Can the melt-up continue? – Humble Student of the Markets

Mid-week market update: The week began on a bullish note this week as the melt-up theme dominated early in the week (see Jeremy Grantham`s call for a possible melt-up, and my own views published last November: Embrace the blow-off, but with a stop loss discipline). On Monday, the market rose for a fifth consecutive day, which flashed a First Five Day (FFD) buy signal. Ryan Detrick at LPL Financial detailed the historical evidence of this momentum effect for the remainder of the year. In addition, analysis from Jeff Hirsch of Almanac Trader showing a shorter positive momentum effects of the FFD for the remainder of January, shown as JB in the table below (January Barometer). Since 1950, whenever the first five days was positive, the rest of January went on to be positive 86% of the time, with an average return of 2.6% and median return of 2.1% for the remainder of the month (N=29). 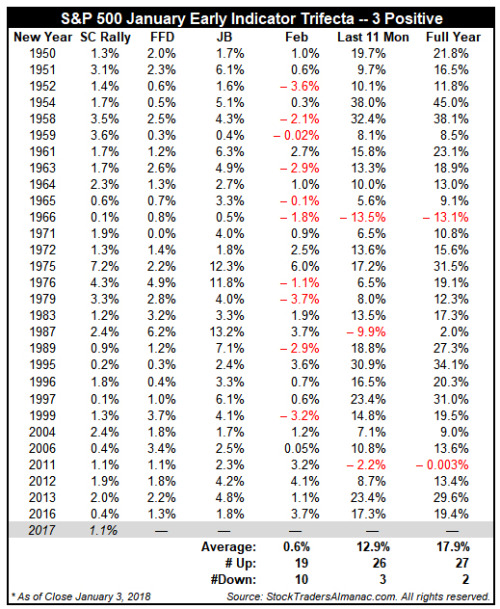 The market celebrated with another win on Tuesday, making its winning streak an astounding six consecutive days. The risk-on rally came to a screeching halt when China reported was considering slowing down or halting its purchases of Treasury paper. The initial reaction saw the yield on 10-year Treasury note spiked and a steepening of the yield curve, though both ended the day roughly unchanged. At the same time, the stock market took a risk-off tone. Here is the Bloomberg report:

Senior government officials in Beijing reviewing the nation’s foreign-exchange holdings have recommended slowing or halting purchases of U.S. Treasuries, according to people familiar with the matter. The news comes as global debt markets were already selling off amid signs that central banks are starting to step back after years of bond-buying stimulus. Yields on 10-year Treasuries rose for a fifth day, touching the highest since March.

Arguably, the response from Beijing was a warning shot to the Trump administration over the prospect of a trade war (see Could a Trump trade war spark a bear market?).

China holds the world’s largest foreign-exchange reserves, at $3.1 trillion, and regularly assesses its strategy for investing them. It isn’t clear whether the officials’ recommendations have been adopted. The market for U.S. government bonds is becoming less attractive relative to other assets, and trade tensions with the U.S. may provide a reason to slow or stop buying American debt, the thinking of these officials goes, according to the people, who asked not to be named as they aren’t allowed to discuss the matter publicly.

Is this the end of the momentum rally?

Making sense of the China announcement

Frankly, neither the China announcement nor the bond market’s reaction makes much sense to me. The only plausible explanation is that this represents a preemptive negotiating tactics in anticipation of possible American imposition of tariffs on Chinese aluminum and steel exports later this month.

Here is some simple math. As long as China runs a trade surplus with the US, it receives USD for the sale of its exports. In turn, China could either sell the USD and buy CNY, which would drive up the CNYUSD exchange rate and make Chinese exports less competitive, or it could opt to hold USD assets. Alternatively, it could choose to hold other assets, such as euros (good luck buying Bunds with negative yields). If it chose to hold USD assets, then the PBoC can either choose Treasury securities, or more risky alternatives such as MBS or corporate bonds.

Brad Setser also pointed out that China’s UST holdings have tended to match changes its foreign exchange reserves. As long as China is running a significant US trade surplus, the threat to either stop buying USTs is therefore an empty one. 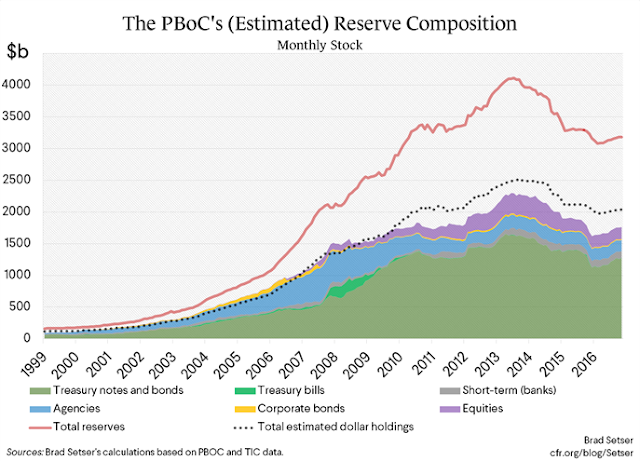 Another paradoxical reaction to the news is the steepening of the yield curve in response to the news. Matthew Klein at FT Alphaville pointed out the following anomaly. The chart below depicts the maturity profile of outstanding Treasury securities.

Klein observed that foreign central banks tend to underweight the long end of the curve and concentrate their holdings in the short end:

If China and other central banks were to sell USTs, then the short yields should be rising faster than long yields. In other words, the yield curve should flatten, not steepen, in response to the latest China news.

I therefore conclude that the latest risk-off episode is only a hiccup and not the start of a sustainable bear phase.

For a different perspective on stock prices, I tweeted the following analysis yesterday and the conclusion still holds. The market had been rising for six consecutive days and conditions were becoming overbought. If history is any guide, it is due for a minor pause in the rally, but don’t count the price momentum effect out just yet. The latest momentum thrust should peak out in around two weeks, after a brief 1-2 day pause. 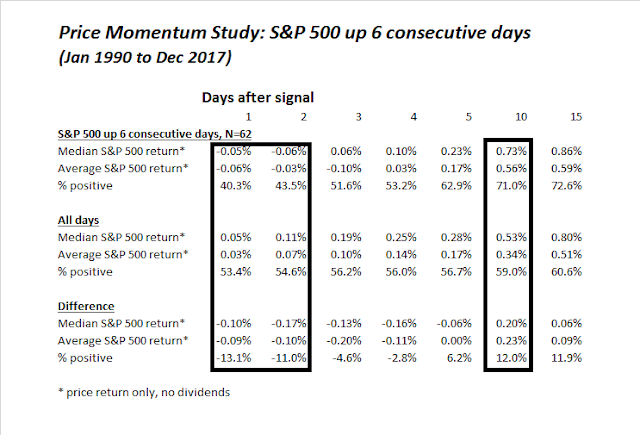 The China bond market news was the ideal catalyst to spook the market at the right time. My inner trader remains bullishly positioned.

3 thoughts on “Can the melt-up continue?”