Bubbleology 101: How to spot the top in a market melt-up – Humble Student of the Markets

Come over to the Dark Side

I have a confession to make. I’ve gone over to the Dark Side. Valuation doesn’t matter. Excessively bullish sentiment doesn’t matter. Overbought readings don’t matter. The only thing matters is the Melt-Up (see Embrace the blow-off, but with a stop-loss discipline and Jeremy Grantham’s call for a market melt-up).

If the market is indeed undergoing a blow-off rally, then investors should be mindful of Bob Farrell’s Rule #4: “Parabolic markets go up further than you think, but they don’t correct by going sideways.”

Nevertheless, there are a number of simple techniques of spotting the top in a parabolic move.

How parabolic tops resolves themselves

When a market goes parabolic, standard analytical techniques don’t matter. The only factor that matters is emotion. Under these conditions, I rely on technical analysis to spot the top on an intermediate term basis.

One of the common patterns that occurs when a market tops out in a buying frenzy is the double top. The market will make a first high, retreat, and then rally to a second high several months later. One of the more notable double tops was the 1980 generational top in gold prices, when it briefly touched $850 in January on the news of the Soviet invasion of Afghanistan in December 1979, the Hunt brothers’ attempt to corner the silver market, which pushed up gold prices, and rising inflationary expectations that the Volcker Fed eventually stamped out with a series of painful interest rate hikes. 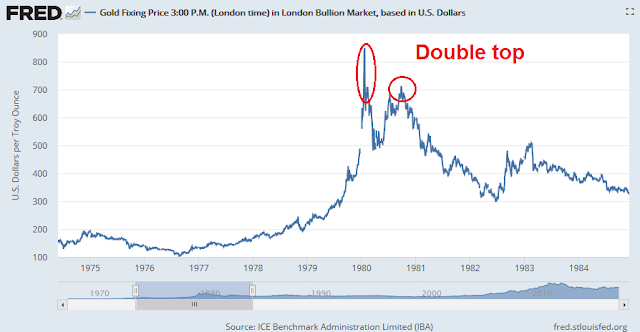 Another frenzied top occurred in 2000 when the NASDAQ staged an upside blow-off. While the double top was less discernible in the chart of the NASDAQ Composite, the pattern is far clearer in the SPX, which saw a negative RSI divergence as stock prices rallied after the initial top. 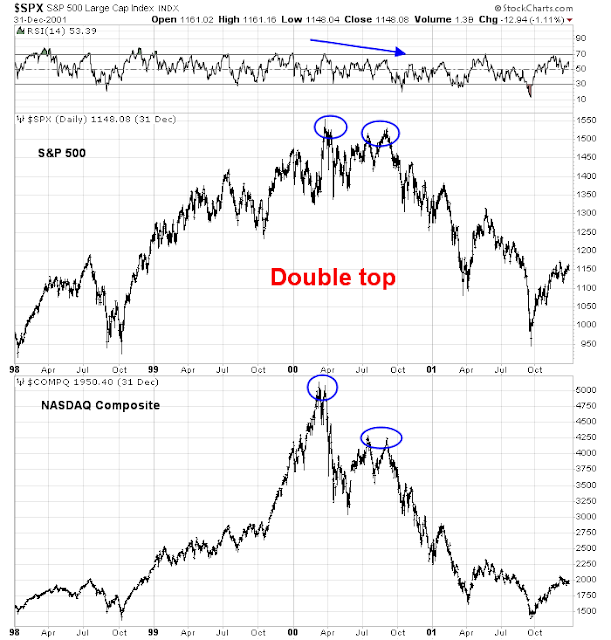 This same pattern of double top and negative RSI divergence can be found in the chart of DJ Global Index. This chart illustrates an important point that was missing in the previous two charts, namely that the second high may or may not exceed the first high. The latest reading shows that the index is highly overbought, but it has not made the initial top yet. Wait for the decline, and watch for the negative divergence, if any, as an intermediate term signal of a blow-off top. 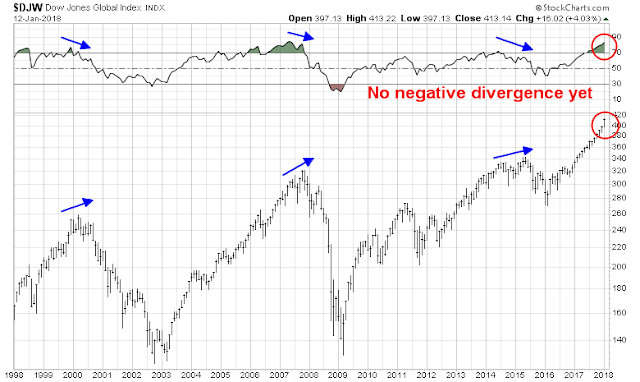 A similar pattern of negative divergences at major market tops can be found in Callum Thomas’ Euphoriameter, which is the combination of Forward P/E, VIX, and Bullish Sentiment (chart annotations are mine). 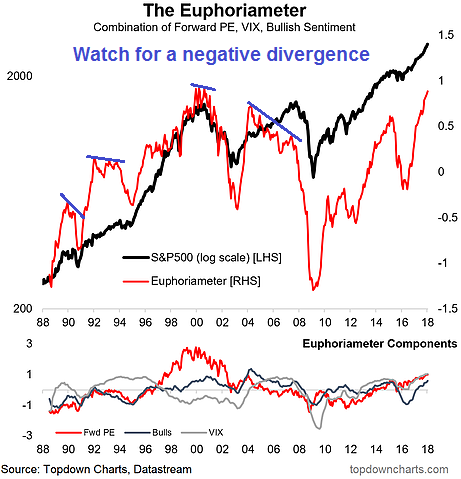 No signs of an imminent top

Current readings show no signs of an imminent top.

Even as Jeremy Grantham called for a possible melt-up, Mark Hulbert pointed out that James Montier, who is part of GMO’s asset allocation team, pointed out that price momentum is dominant during the formation of an asset bubble:

But the more I examined the issue, the more I discovered a different possibility: It’s not necessarily irrational to continue investing in the market even as the odds of a bubble increase — even if it’s not for the faint of heart.

I owe this insight to James Montier, a member of the asset allocation team at Boston-based GMO. In a study he conducted several years ago, he pointed out that investing in a bubble can be rational so long as the market delivers ever-higher returns as the odds of its bursting also increase. It’s just a matter of risk and reward: If the reward is great enough, virtually any risk can be tolerated.

Though Montier doesn’t use this analogy, it’s akin to playing Russian Roulette with your money. Each successive month in which the bubble doesn’t burst is akin to the gun firing a blank. Of course, that only increases the odds even more that the bursting will happen in the subsequent one. To continue playing the game, investors need to be promised a bigger and bigger payoff.

Montier’s model helps to explain why the market’s advance becomes parabolic right before a bubble bursts. Just recall the market’s rise in the final stages of the internet bubble: In the last six months before that bubble burst in March 2000, the Nasdaq Composite doubled in value.

This is also part of the reason why Montier’s colleague, Jeremy Grantham, is advising clients to ready for themselves for a “melt-up” in the stock market before the current bubble bursts. He points out that, strong as the stock market has been over the last year, it hasn’t risen at the near-parabolic rates that were produced in the latter stages of past bubbles.

If momentum is a characteristic of bubbles and melt-ups, then the behavior of this factor indicates that the blow-off is not at an end. MTUM, which is the price momentum ETF, remains in a healthy relative uptrend to the market.

In this momentum mad environment, some of the traditional technical and sentiment indicators that would normally indicate caution can have unexpectedly bullish interpretations. This chart of 14-month RSI shows that the market is wildly overbought and stretched to the upside, but these readings can be seen as “good overbought” conditions indicating positive momentum. Indeed, such conditions have led to substantially higher prices in the past. 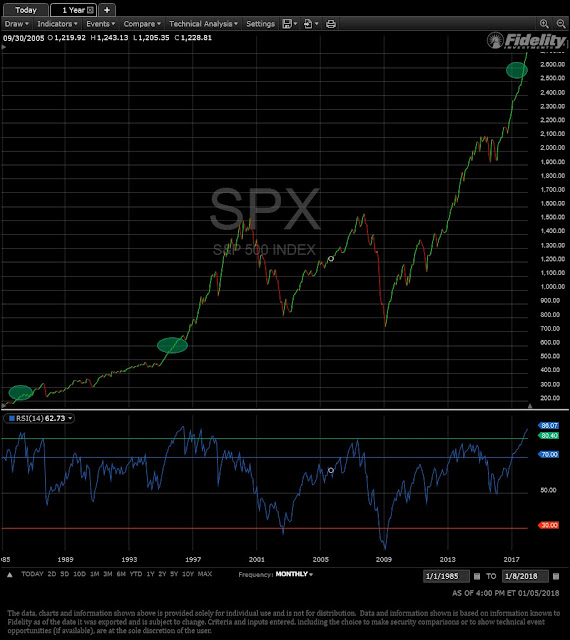 Similarly, Nautilus Research found that a crowded long in the AAII sentiment survey has historically been bullish. 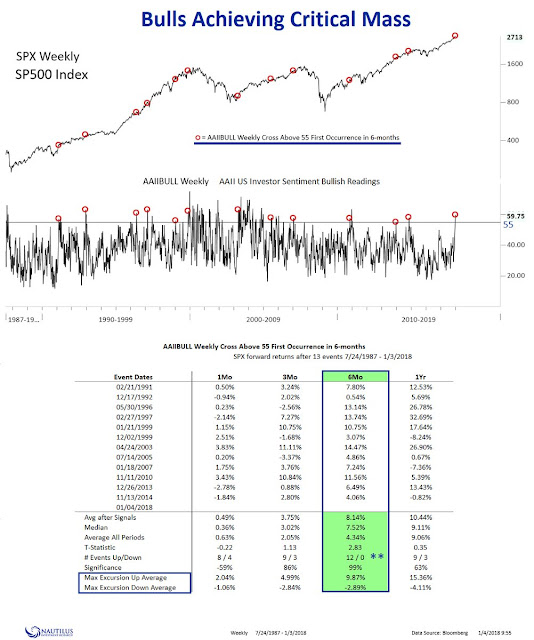 …and an absence of bears in the II survey has similarly led to higher equity returns in the past. 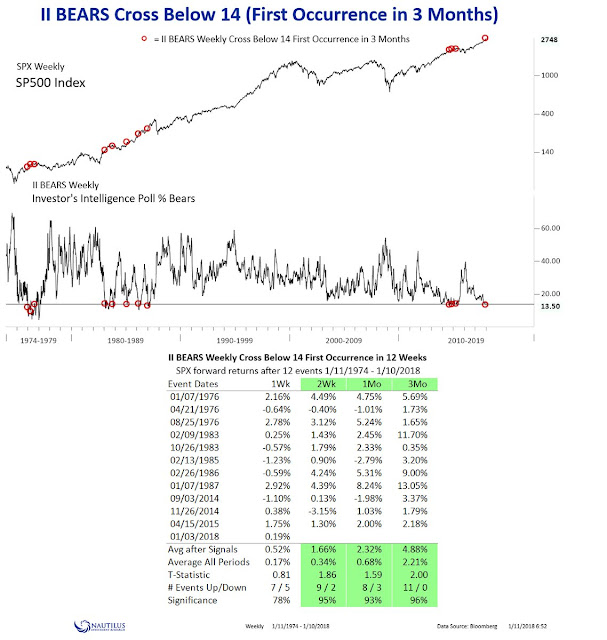 There are also signs of fundamental momentum at work as well. Ned Davis Research pointed out that the typical pattern of aggregated consensus EPS estimates is they start high, and then slowly decay over time. That`s because analysts tend to be overly optimistic, and cut their estimates as the actual earnings reporting dates approach. This year, 2018 EPS estimates unusually rose, possibly due to the effects of the recently tax cuts. 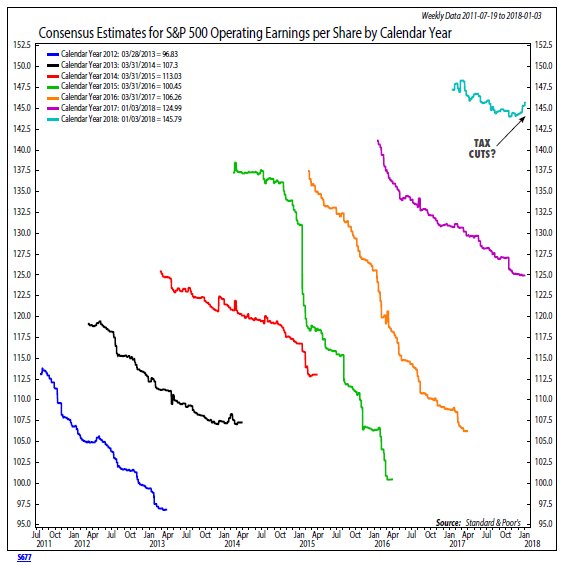 To quantify the tax cut effect, FactSet reported that forward EPS has risen an astonishing 1.90% in one week, and 3.02% since December. Moreover, 2018 estimates have risen 2.2% from December 20 to January 11. The increase in these bottom-up aggregates only began when the actual details of the tax bill became known, as company analysts would not raise their estimates until they could calculate the precise impact of the corporate tax cuts on the companies in their coverage universe.

However, we can get an idea of the magnitude of the tax-cut effect another way. Top-down strategists have not been shy about estimating the impact of the tax bill, and most top-down forecasts call for an increase of 6-9% in 2018 EPS. As FactSet reported that 2018 EPS estimates have only risen 2.2%, the upward momentum in bottom-up EPS revisions is likely to continue. 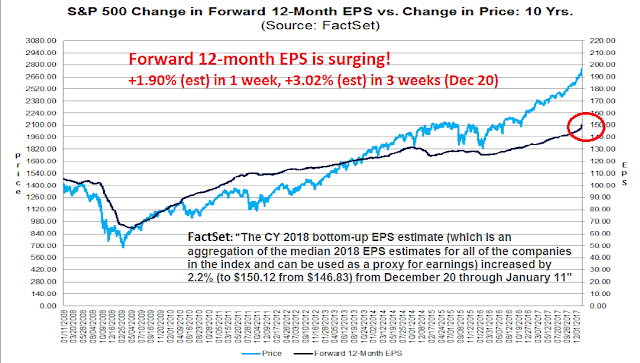 Come over to the Dark Side. Don’t turn bearish too soon.

Looking to the week ahead, the tactical technical picture remains positive. Despite many readings of an extended market, which can be ignored, some of my key indicators are not flashing short-term sell signals yet.

During the market rally, the term structure of the VIX Index moved to an extreme complacent reading on January 3. As the stock market continued its advance, this sentiment indicator retreated to neutral indicating cautiousness. In other words, the market is climbing a wall of worry. 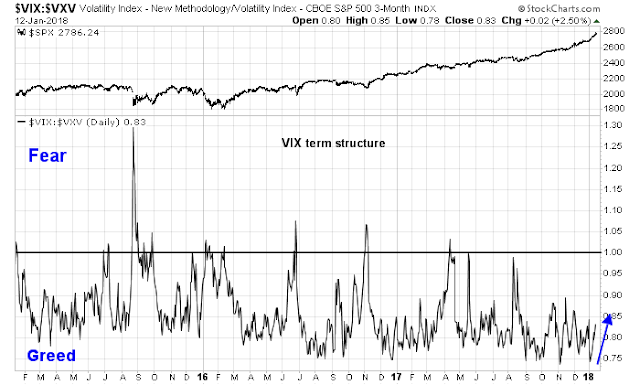 We can see a similar effect in the VIX Index last week. As stock prices rose, the VIX Index unusually rose along with the market. I am in debt to Jesse Felder, who pioneered the use of the 10-day SPX-VIX correlation as an indicator. In the past, spikes in SPX-VIX correlations has seen the market struggle to maintain its advance. Current readings are not in the danger zone yet. 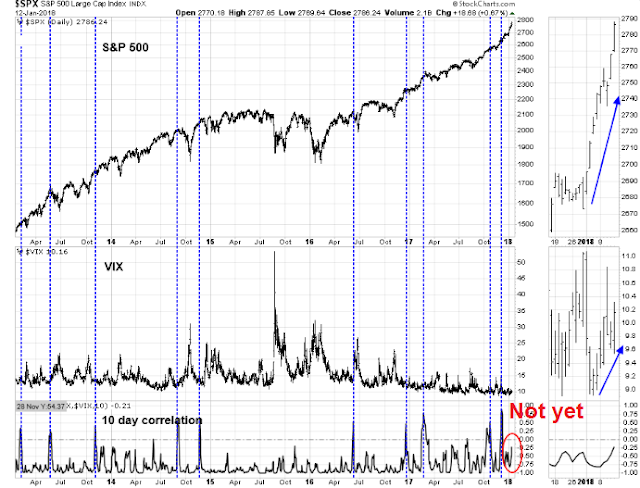 In addition, credit markets are not showing any signs that risk appetite is one the wane. The price action in investment grade (IG), junk bonds, or high yield (HY), and emerging market (EM) bonds are all confirming the equity market advance.

Rob Hanna of Quantifiable Edges published the following study on Thursday after the market briefly paused its advance. He confirmed my own analysis about the persistence of price momentum under the current circumstances (see Can the melt-up continue?). If history is any guide, the market advance is likely to continue.

I would nevertheless like to offer a word of caution. Breadth indicators from Index Indicators are flashing overbought conditions. However, overbought markets can continue to stay overbought, and momentum surges have led to higher prices in the past. 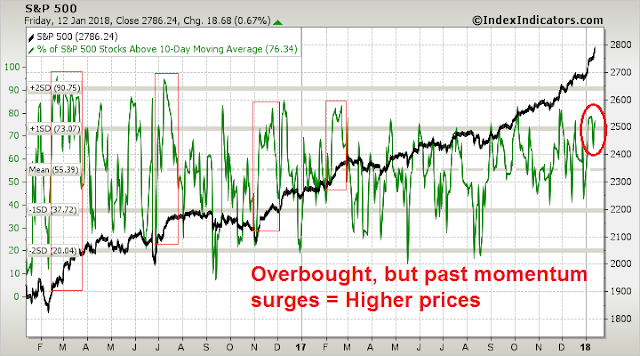 Lastly, I found an encouraging reading from the Commitment of Traders (COT) data. My conclusion of analysis of COT data has found that COT analysis of the SPX and Russell 2000 was not effective at forecasting future directional moves. However, extreme readings in the NASDAQ 100 was a useful contrarian signal, as NASDAQ 100 index represent a highly liquid instrument to make high beta bets.

The latest report from Hedgopia found that large speculators (read: hedge funds) are moving off a crowded short position in the NDX. This suggests that some people in the fast money crowd got caught offside as the market rose. Traders who got caught are likely feeling a lot of pain in this updraft, indicating that there is potential buying power as risk managers force hedge fund traders and portfolio managers to cover their short NDX positions. 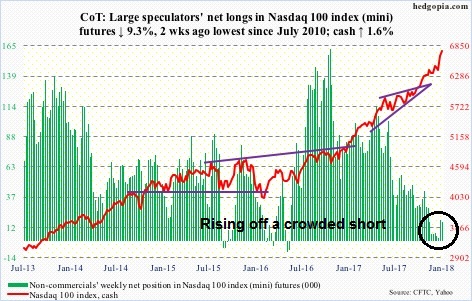 Come over to the Dark Side! Party on!

My inner investor remains bullishly positioned, and my inner trader added to his long positions after the brief pause that he anticipated (see Can the melt-up continue?). In a future post, I will detail the risks that may derail this blow-off. Stay tuned for Bubbleology 102.

6 thoughts on “Bubbleology 101: How to spot the top in a market melt-up”