How far can this momentum rally run? – Humble Student of the Markets

Mid-week market update: How far can this momentum rally run? Already, the momentum frenzy is exceeding the pace set during the height of the Tech Bubble. 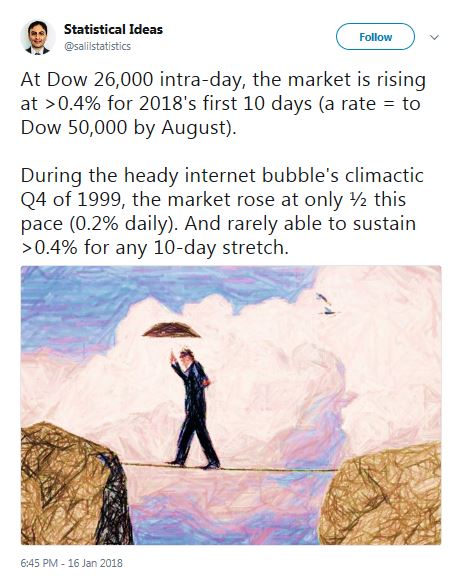 The WSJ recently published an article about the dominance of price momentum: “The Momentum Game Has Returned to the Stock Market”.

Forget fundamentals: Momentum is back in the stock market. For the first time since the 2008 financial crisis a simple strategy of buying the stocks that had already gone up the most delivered a remarkable outperformance last year. Is it a sign of excess or the start of a new bull run?

Momentum is a formal way to capture two old Wall Street dictums: The trend is your friend until the end, and let your winners run. It can be measured over any period from microseconds to years, but investment strategies typically look for three-, six- or 12-month trends.

The article went on to lay out the bull and bear cases for momentum, and, by implication, the latest bull run:

There are two prevalent explanations for momentum, and today the choice will make you more or less worried about the power of the trend.

The bearish explanation is that investors put far too much weight on the past, and buy what has gone up without properly assessing whether that is likely to continue. Momentum is created by this blind buying, and pulls prices further and further away from where they should be, until they snap back and crush those chasing gains.

The bullish explanation is that it takes time for investors to price in a new environment.

On this view prices rose as investors slowly woke up to the unexpected global economic strength and slowly came to believe in higher profits. Perhaps company analysts still haven’t included U.S. corporate tax cuts in their profit forecasts due to their complexity, which could mean still more good news to come as the earnings season brings tax guidance from CFOs.

Certainly, a number of sentiment indicators are looking stretched. Bloomberg reported that the prices of call options are extremely expensive relative to the price of put option protection. 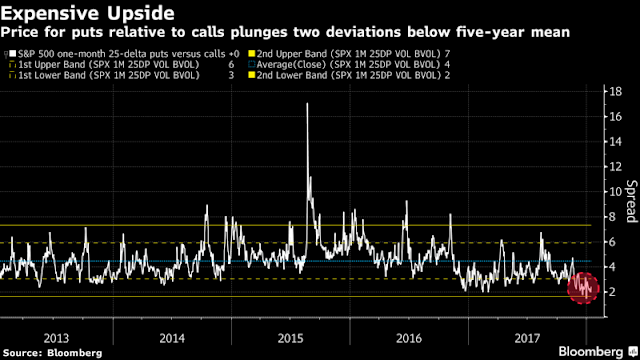 Strategist Jim Paulsen, who had been very bullish, sounded a word of caution in a recent CNBC interview:

In fact, he called the optimism of late “really overwhelming.”

“It’s so striking because we haven’t had it in the entire recovery. The wall of worry was probably the cornerstone of this bull market. … That is gone,” the chief investment officer at the Lethold Group said in an interview with “Power Lunch.”

“That opens you up to the bear’s bite,” he added.

Is the combination of a pause in stock prices Tuesday and the carnage in crytpocurrencies* represent a warning that the momentum run is nearing an end? If so, does that mean the stock market is destined to suffer a near-term correction?

* Sorry, the cryptos aren’t tanking, that’s just a dead-cat bounce in the value of the fiat paper currencies.

How crowded is the momentum trade?

Consider the intermediate term evidence on price momentum. This chart from the WSJ article is certainly suggestive that outperformance of this factor is stretched on a historical basis. 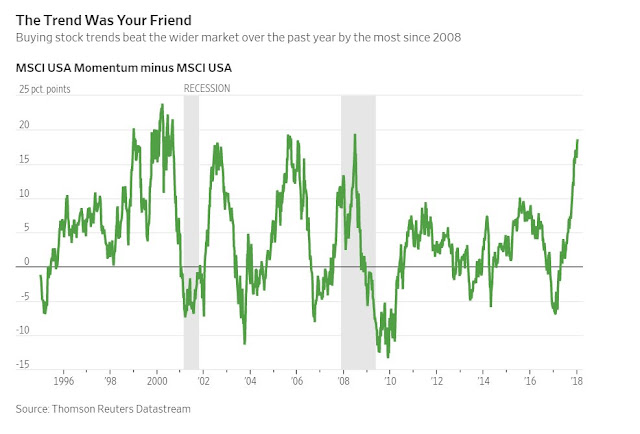 The latest evidence from January 2018 BAML Fund Manager Survey (FMS) is mixed. On one hand, the latest results indicate that fund managers have thrown caution to the wind and discarded the tail-risk hedges in their portfolios, which can be interpreted as contrarian bearish. 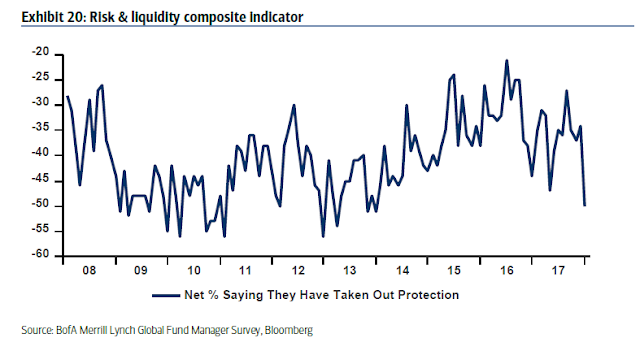 As well, fund managers are now excessively bullish on equities. On the other hand, the historical evidence indicates that these crowded long conditions can persistent for a long time. In fact, these conditions could be interpreted as supportive of a melt-up scenario, as these sentiment readings represent only the start of a momentum thrust in the market. 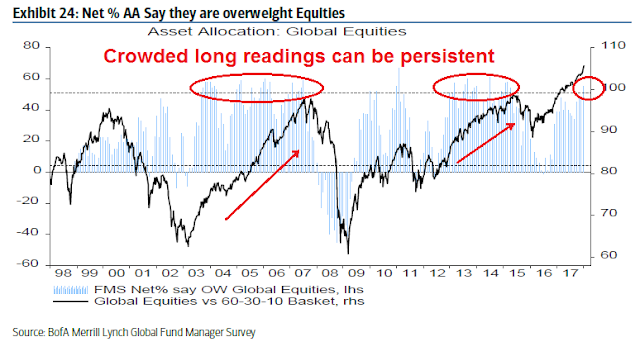 In addition, managers remain skeptical about the dominance of price momentum. They still believe that high quality stocks will outperform. 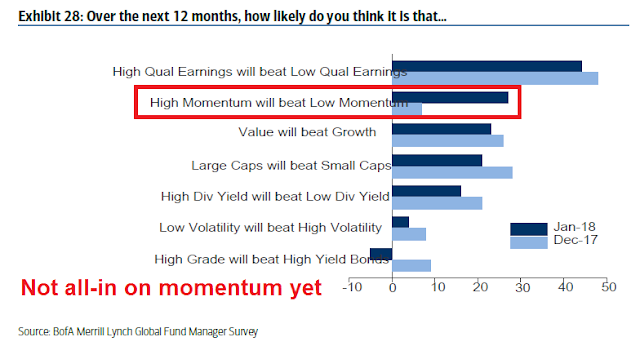 If this is truly a melt-up and momentum frenzy, then managers need to capitulate and go all-in on price momentum as a factor. That hasn’t happened yet.

Subscribers received an email notification that my trading account had taken profits in its long positions and it had gone to 100% cash. That’s because a short-term spike in SPX-VIX correlation has historically resulted in some short-term sloppiness. Since that alert, the 10-day correlation has continued to rise. 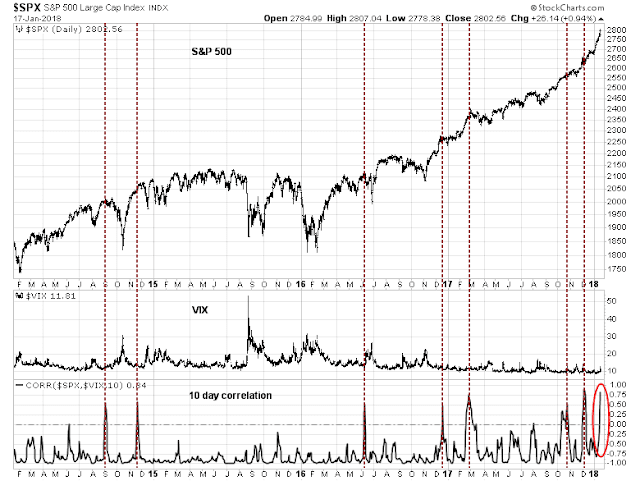 This week is option expiry week. Rob Hanna at Quantifiable Edges found that returns during January OpEx has been weak and volatile. Jeff Hirsch at Almanac Trader came to a similar conclusion and  described January OpEx as “choppy”. 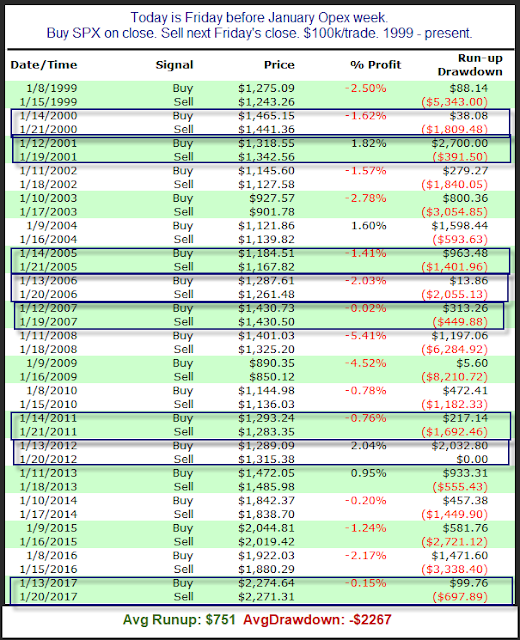 While I am getting ready for some short-term volatility, my inner trader is not prepared to turn bearish on this market yet. As long as momentum is holding up, which it is…

…and credit market risk appetite remains positive, which it is, I am inclined to give the bull case the benefit of the doubt.

Unless these factors turn south, my inner trader is getting ready to buy any significant dips.

1 thought on “How far can this momentum rally run?”