The last time I published a post in a series of “things you don’t see at market bottoms” based on US based investor enthusiasm was in January. That’s because market exuberance had significantly moderated since the January top. Guess, what, the giddiness is baack!

As a reminder, it is said that while bottoms are events, but tops are processes. Translated, markets bottom out when panic sets in, and therefore they can be more easily identifiable. By contrast, market tops form when a series of conditions come together, but not necessarily all at the same time. My experience has shown that overly bullish sentiment should be viewed as a condition indicator, and not a market timing tool.

Past editions of this series include:

I reiterate my belief that this is not the top of the market, but investors should be aware of the risks where sentiment is getting increasingly frothy.

Risk appetite is returning to the markets after correction from the January market peak. Lisa Abromowicz at Bloomberg recently pointed out that investors have piled into the lowest rated junk bonds, which are outperforming.

Car finance companies have pushed into fresh territory this year by selling Single B rated debt backed by loans made to sub-prime borrowers.

Selling Double B bonds wInas a bold trade not so long ago but as demand has grown for riskier assets, auto sellers are now able to sell further down the capital structure.

That’s because investors can pick up more yield (even though interest rates are rising):

By migrating to Single B from Double B, investors can pick up a bit of the spread that has vanished from less risky classes.

Last summer Double B spreads sank to a post-crisis low of around 300bp. But by last month, Westlake had cleared its Double B notes at 205bp, according to IFR data.

Still, not all is well. The rush into junk is creating an enormous gap between the relative price performance of junk bonds (blue line), investment grade bonds (red line), and emerging market bonds (green line) against equivalent duration Treasuries. Each sector is behaving according to its own dynamics. IG bond prices may be depressed by the effects of the latest tax bill, where companies that held offshore cash in IG paper have been selling their corporate bond holdings in order to repatriate cash into the US (see this analysis from Convex Capital Management). EM bonds are under stress because of rising rates that is pressuring fragile EM economies with external debt.

Which bond market do you believe?

Runaway M&A activity is often seen as a sign of a market top. The court’s approval of the AT&T-Time Warner deal is likely to set of another wave of M&A activity in that sector. Already, we are seeing a bid from Comcast for Fox assets in a challenge to Disney.

Notwithstanding the impact of the AT&T/Time Warner merger, M&A activity is set to hit an all-time high of $5 trillion in 2018, according to Business Insider:

2018 is the most active year for dealmaking on record, according to data from Bloomberg, with nearly $1.7 trillion worth of deals announced across the globe.

That pace puts the market on track for $5 trillion in deals, which would blow away pre-financial crisis level highs when mergers topped $4.6 trillion in value in 2007.

Hernan Cristerna of JPM echoed those sentiments in a Bloomberg TV interview stating that this year is poised to be the “best ever” in M&A activity and “we are in an unprecedented M&A market”.

Here is another indicator of giddy risk appetite. An article in USA Today advised teens that “Investing in Facebook, Amazon, Google stocks could turn summer job pay into a fortune”:

That $10-per-hour summer job slinging eggs or saving lives at the beach could add up to more than pocket change. In fact, it could translate into a nest egg of tens of thousands of dollars if you sock some of the cash away in the stock market.

While the pay isn’t great for teens and college-age workers looking to make a few extra bucks — 87% of employers hiring this summer plan to pay $10 or more an hour, CareerBuilder says — it’s enough seed money to build a small fortune in a short period of time, an analysis by educational investment app Rubicoin found.

Rubicoin calculated how much money a worker earning $10 an hour in a 25-hour workweek for 13 weeks each summer the past four years would have if they invested half of their before-tax pay equally on Aug. 31 each year in four FANG stocks — Facebook, Amazon, Netflix and Alphabet, Google’s parent company. Half of the annual summer pay adds up to $1,625 per summer.

That $6,500 investment since 2014 would be worth $15,899 today, according to Rubicoin, citing closing prices on May 28. And for summer workers who favor big bets, that initial investment would have grown to $22,639 if they funneled all the cash into just Netflix stock, or $19,554 if they bet it all on online retail giant Amazon.

As they say, past performance is not an indication of future returns. That a mainstream publication like USA Today would try to project those kinds of returns based on meager summer job earnings may be a classic example of a contrarian magazine cover indicator sell signal. To be sure, the BAML Fund Manager Survey found that the most crowded trade is long FAANG + BAT (Baidu, Alibaba, and Tencent). 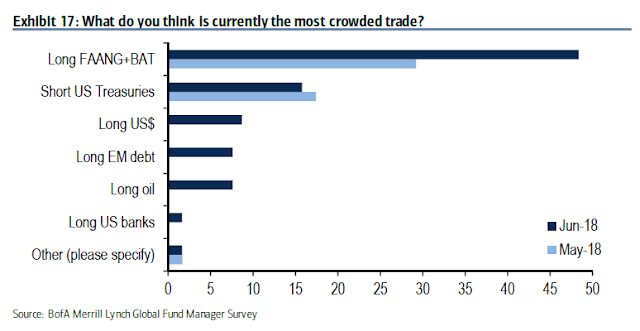 Excuse me, I have to cut this short. I have to run and buy the triple leverage FANG ETF in my kid’s margin account…