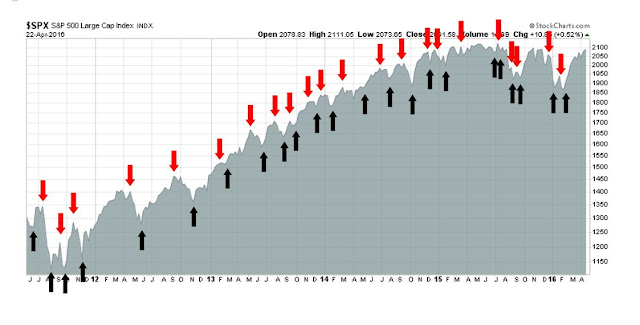 The (inflation) universe is unfolding

The (inflation) universe seems to be unfolding as it should. Regular readers know that I have been preparing for a resurgence in commodity prices (see The 2016 macro surprise that no one talks about, written in December 2015, RIP Correction. Reflationary resurrection next? written in March 2016 and My roadmap for 2016 and beyond, written a week ago). We finally got broad based confirmation of a recovery in commodity inflation last week.

Commodity and oil prices shrugged off the Doha non-freeze surprise and broke out to new recovery highs, which is bullish as you can tell the tone of a market by how it reacts to what should have been bad news. As the chart below shows, the cyclically sensitive industrial metals staged upside breakouts above its 200 day moving average (dma), as well as new recovery highs. The energy heavy CRB Index did break out to the upside, but it is now testing its 200 dma. 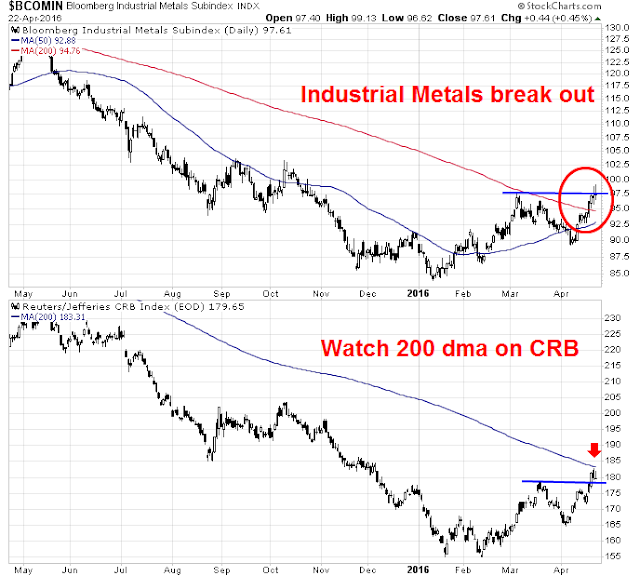 I interpret the surge in commodity prices as a sign of rising growth – and these signs are reflected in the fixed income markets as well. The crowded long position in bonds that I identified is resolving itself with a steepening yield curve (see What does the crowded long position in bonds mean for stocks?). The chart below shows that the 30 – 2 year yield curve has staged an upside breakout, though the 10 – 2 year curve has yet to break out yet. 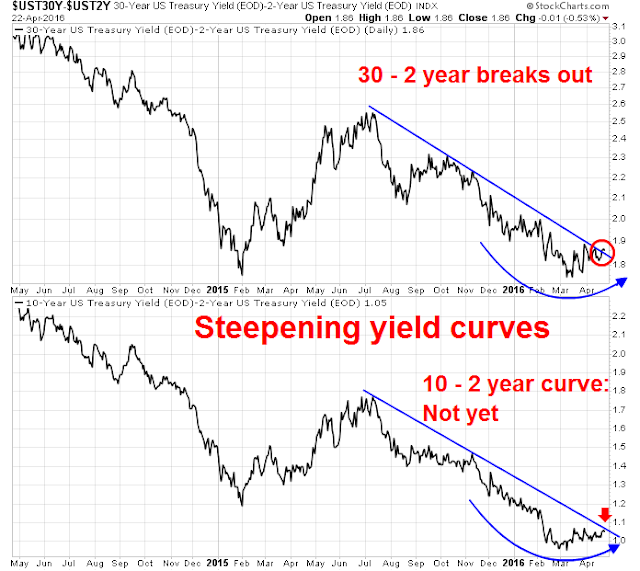 We are also seeing inflationary expectations are also ticking up in the bond market. The 5 year X 5 year forward expected inflation rate is rising, though it remains in a downtrend. The existence of the longer term downtrend is potentially important for Fed policy, as central bankers like to see some definitive confirmation of trend reversals before acting. 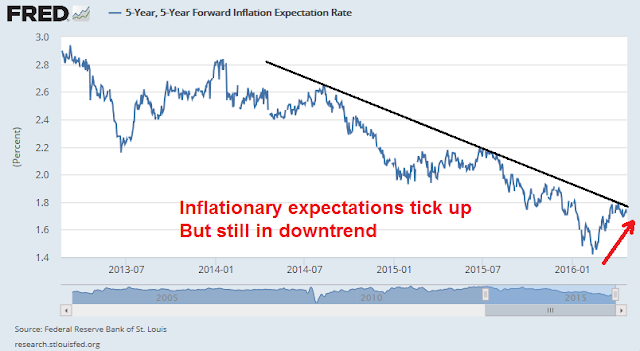 Much of the growth revival could be attributable to stimulus that the Chinese has implemented this year (also see More signs of unbalanced Chinese growth). Callum Thomas recently documented the shift in Chinese fiscal and monetary policy towards greater growth accommodation.

He also pointed out that there are “green shoots” of a trade revival, for both China and globally.

This chart from Citi shows that, as a consequence of the stimulus package, Chinese M1 has surged, and its effect on metal prices are evident. 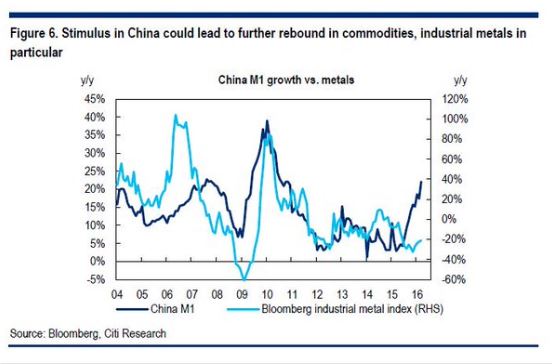 Commodity markets may be in for a bullish surprise. Bloomberg reports that “the great ball of China money is moving away from bonds and stocks to commodities”. Speculators are piling into obscure commodities such as steel reinforcement bars, hot-rolled coils, cotton and polyvinyl chloride. We saw in the past how naive Chinese retail money, many of whom with barely high school educations, drove Chinese stocks to frenzied levels in the past. The same could happen again, but in the less liquid commodity market. 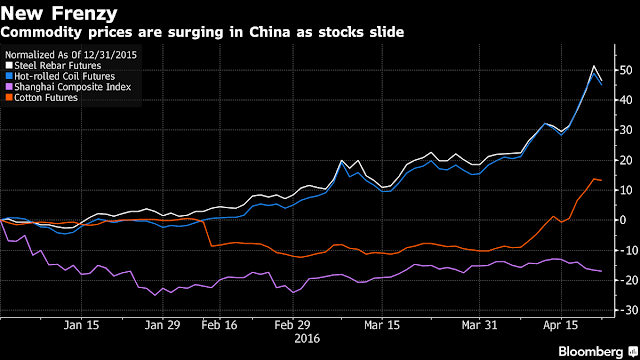 George Soros believes that China looks eerily like the US in 2007-08 as Beijing embarks on another round of credit fueled growth. No doubt this won`t end well, but that end won`t come immediately. He admitted that the bubble “may be able to feed itself for some time”. The Chinese are throwing a party, so enjoy it (but watch for the signs that the neighbors are calling the cops).

One of the key tools used by chartists and technical analysts is breadth confirmation. We are seeing broad based breadth participation in rising risk appetite at a global level and across different asset classes. I interpret these conditions to mean that we are still in the early stages of a market rally.

Consider, for example, the strength of US and European stocks, which are all in various stages of upside breakouts and other bullish developments. 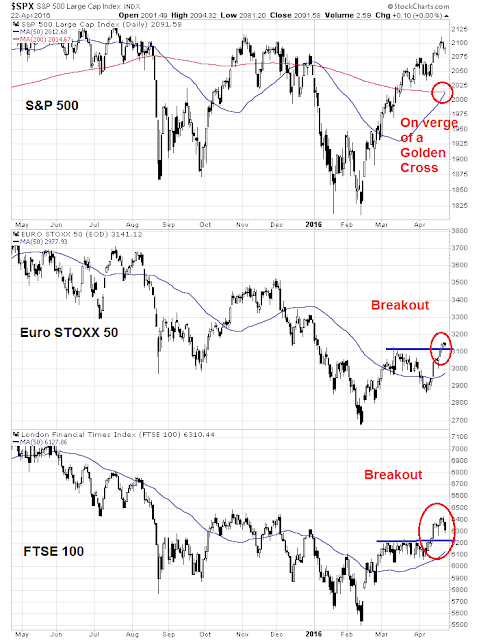 The stock indices of the major Chinese Asian trading partners are all showing strength and above their respective 50 dma. 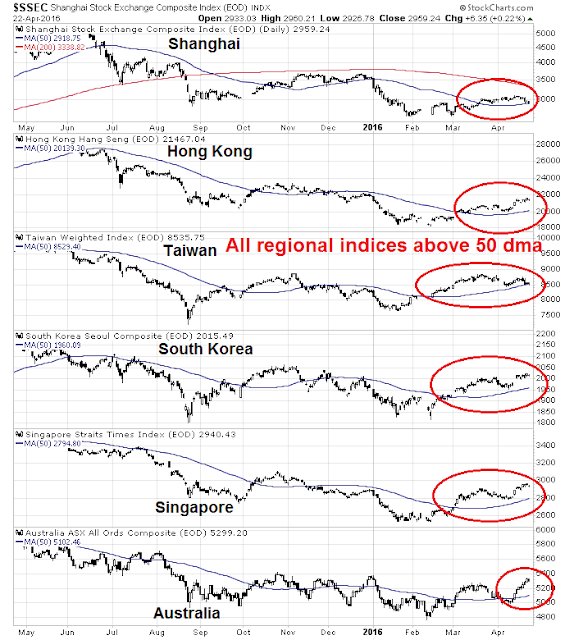 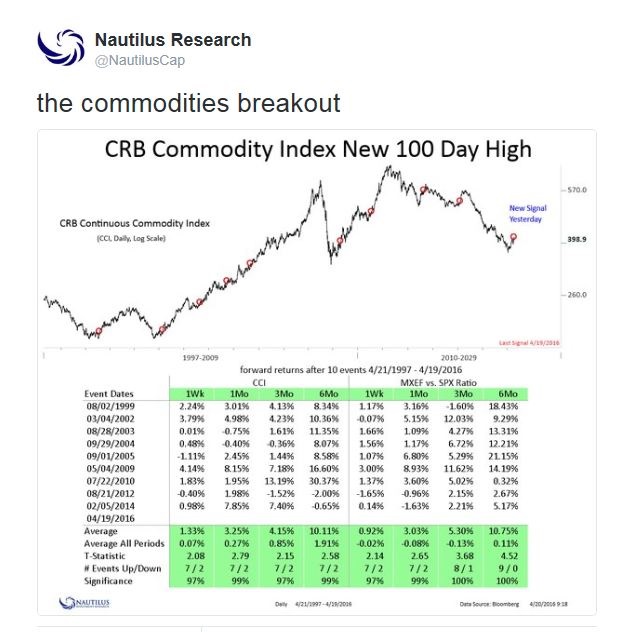 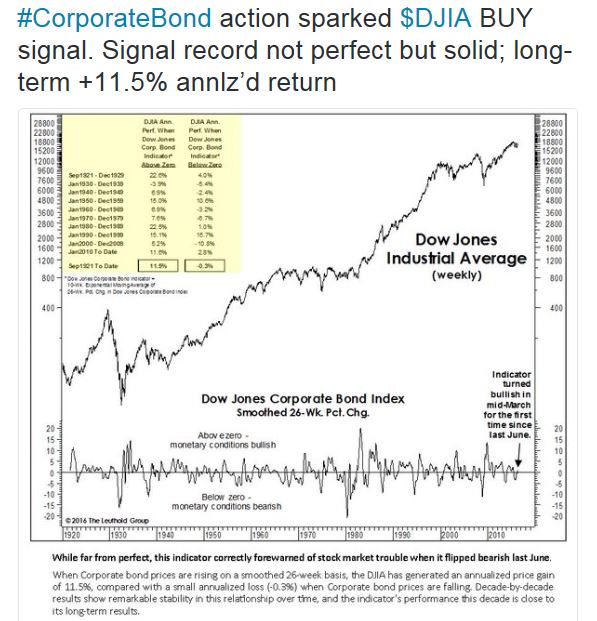 Like I said, the surge in risk appetite is broadly based, global and across different asset classes.

How far can stocks rise?

In the wake of my post last weekend where I postulated a market blow-off this year led by capital goods and resource extraction stocks (see My roadmap for 2016 and beyond), I had an extensive discussion with another investment professional of the upside potential for US equities. Here is what I came up with:
Let’s start with how earnings might evolve. Equity earnings had been depressed in 2015 by falling energy prices. Now that oil prices have stabilized and possibly starting to rise again, we can pencil in a recovery of 1/3 to 1/2 of the EPS losses from falling commodity prices, which amounts to a 5-7% EPS growth for the SP 500. 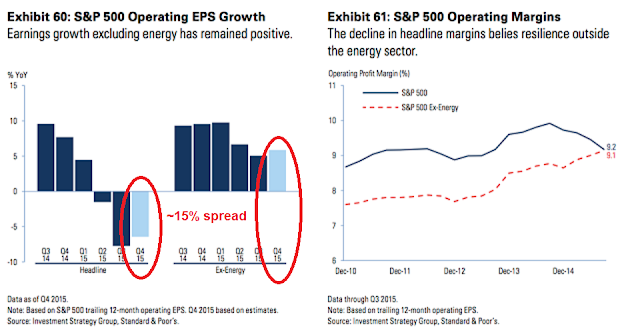 Also factor in some gains in the EPS of large cap multi-nationals because of the rising USD, whose strength has also reversed itself. We get some a conservative estimate of total EPS gains of 5-10%. If we assume no change in P/E multiple, we get upside potential of 5-10% in equity prices.

Indeed, the recovery in EPS seems to be underway. The latest update from John Butters of Factset shows that forward 12 month EPS is rising again. The report card from Q1 Earning Seasons is also coming in with solid results. The EPS beat rate is above the historical average and the sales beat rate is roughly in line with historical norms (chart annotations are mine). 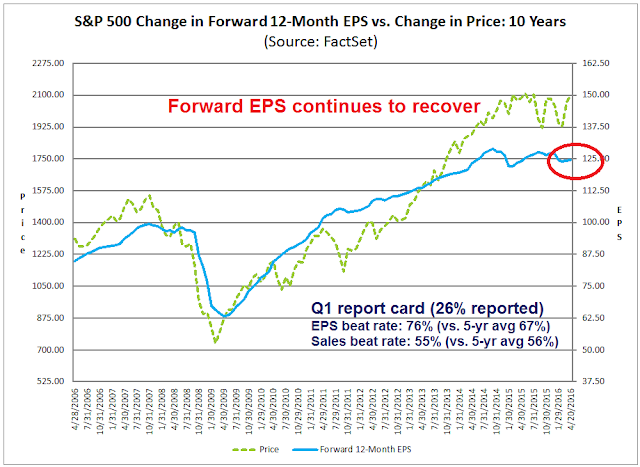 Assuming my scenario of a market top out this year, we would likely see further gains from multiple expansion. The Morningstar fair value estimate shows that the median stock is at roughly fair value. Historically, the market doesn’t top out until it sees a 10-15% overvaluation. 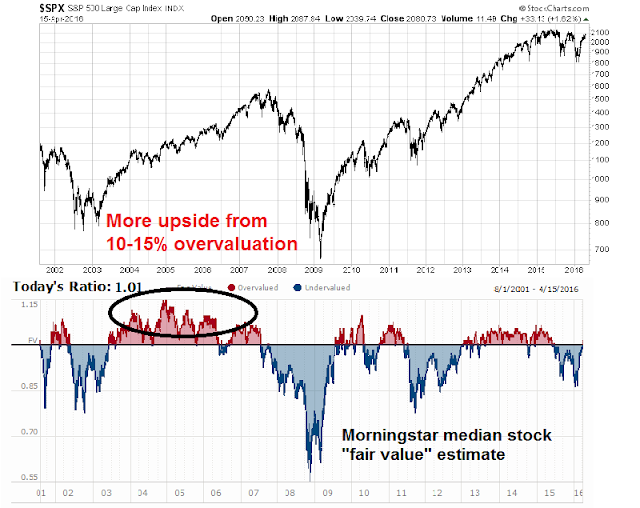 Indeed, the signs of rising risk appetite, which leads to multiple expansion, are evident. High yield spreads are compressing again, which is a sign of falling risk aversion (and improving risk appetite). 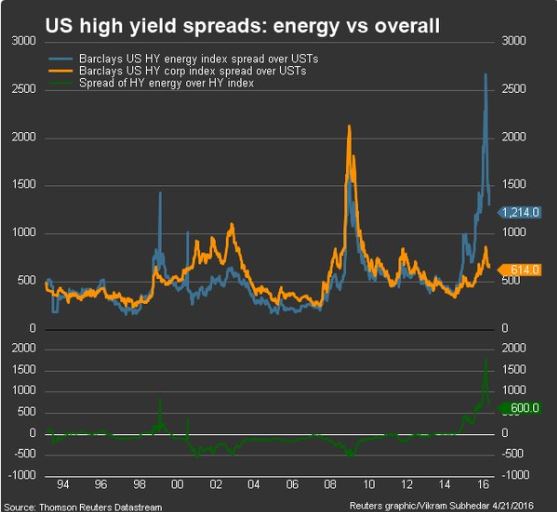 When I put it all together by factoring in 5-10% upside from EPS growth and 10-15% from multiple expansion, I get a conservative estimate of a 15-20% return potential for stocks in a market top scenario. This translates to an upside target of 2400-2500 for the SP 500.

Big Money not positioned for the reflation surprise

The latest results from Barron’s Big Money Poll indicate that US institutional money managers don’t seem to be positioned for this outcome. There are far more managers who are bearish and expect a 10% decline in stocks than bullish ones who expect a 10% rally. 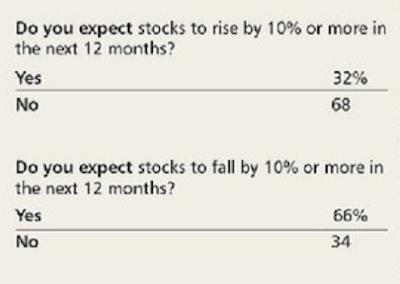 When asked about the biggest risks, they cite earnings disappointment and economic slowdown. Should my reflationary scenario be realized, a FOMO (fear of missing out) rally could develop as institutions are likely to pile into equities. 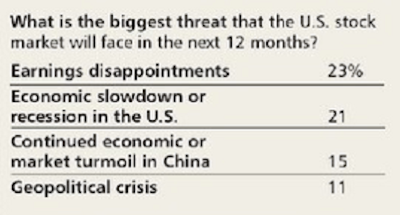 Similarly, the BoAML Fund Manager Survey, whose survey sample are mainly global fund managers (whereas the Barron`s poll consists mainly of US institutions), also show a high degree of defensiveness. Cash allocations are elevated and rising, which is contrarian bullish. 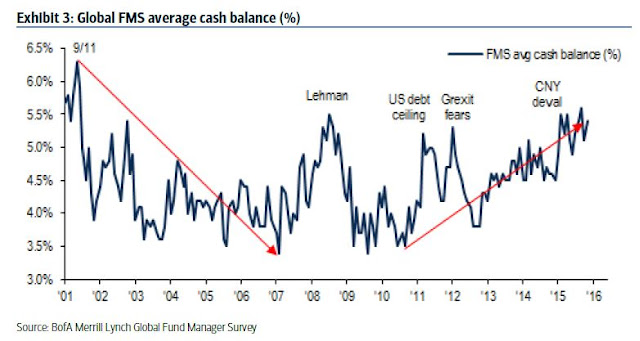 The one group of managers who have bought is the NAAIM survey of RIAs who manager individual investor money. NAAIM exposure readings have normalized. Tom McClellan has interpreted these conditions bearishly. Past history shows that the market has advanced when NAAIM exposures have been at current levels, which suggest to me that this indicator functions better as a contrarian buy signal than a sell signal (chart via Marketwatch, annotations in blue are mine).

Here is a longer term chart of NAAIM exposure readings, which suggests that this metric may be more useful as a contrarian buy signal, when RIAs are panicked over the market. 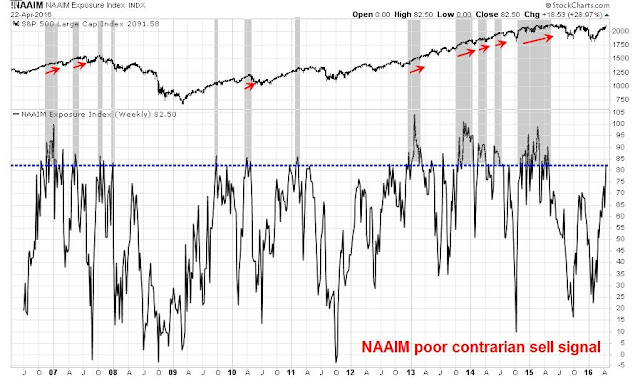 Sentiment models of individual investors also show a high degree of skepticism about this rally. 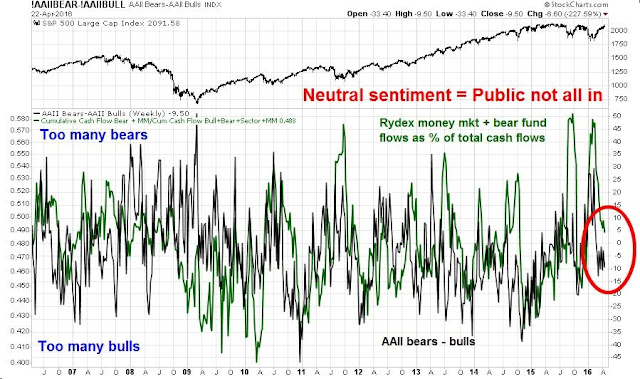 In summary, here is how different groups of investors are positioned:

These are the ingredients for a FOMO melt-up as the reflation surprise that I postulated materialize.

From a technical perspective, the next few weeks could present an important test, especially if the SPX can stage an upside breakout to new highs. The monthly SPX chart shows that the market may be in the process of reversing its negative MACD episode (bottom panel), with either an upside breakout or a MACD recovery into positive territory. 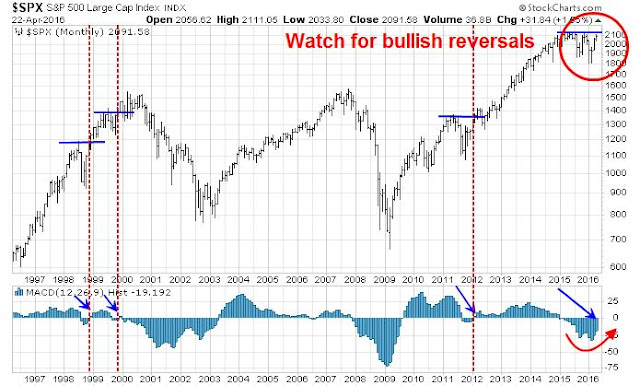 This will be a test that I will be watching closely.

One of the key unknowns of my investment thesis is the timing of the Fed`s reaction function. The Fed has cited global market turmoil as one of its asymmetric risks and the normalization in risk appetite of the past few weeks could play a key role in the pace of interest rate hikes.

As we approach another FOMC meeting next week, Tim Duy highlighted how market perceptions could change radically if the Fed changes its tone: 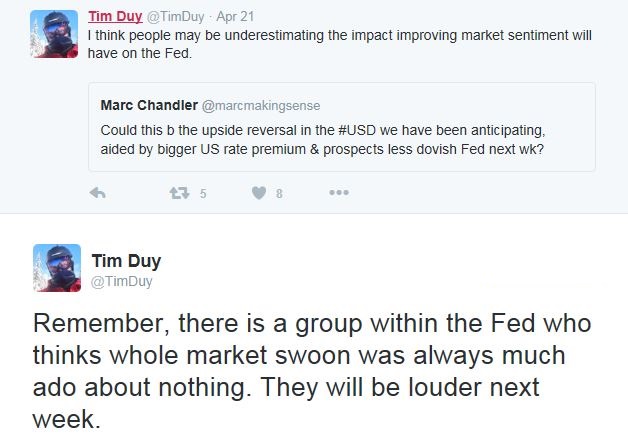 Similarly, Goldman Sachs put out a note warning that the Fed would change its assessment of “balance of risks” to give it a more hawkish tone (via Calculated Risk):

The key question will be what the committee does with its balance of risks assessment, which has been excluded from the statements following the last two meetings. We expect the statement to say that risks to the outlook are “nearly balanced”, or to otherwise indicate that downside risks have receded somewhat since early this year.

My inner investor remains bullishly positioned and overweight the resource extraction sectors. My inner trader also re-entered the market on long side (see Climbing the Wall of Worry). Both will be tightening their stop loss limits as we approach the FOMC meeting.