What happens if the Fed gets less dovish? – Humble Student of the Markets

Mid-week market update: There doesn’t seem to be much of a point in writing about the technical condition of the market when its likely path is dominated by a binary event like the FOMC meeting this week. So I thought that I would write about how to interpret and react to the FOMC statement instead.

Much of investing is about setting a course of action and assessing risks under different scenarios. A key assumptions of my equity bull case that I made on the weekend is a relatively equity friendly Federal Reserve (see How the SP 500 can get to 2400 this year). As we approach another FOMC meeting, a key question is, “How do we react if the Fed gets more hawkish?”

Poised for a hawkish rebound?

Despite the dovish tilt of the Yellen Fed, BCA Research pointed out that the Fed seems to go through a stop-start hawk-dove policy loop – and we are currently nearing a dovish extreme.A reversion to a more hawkish tone in its communications would therefore be no big surprise. 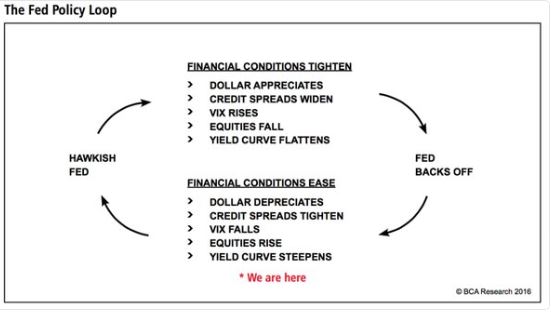 From a technical perspective, the markets are also ripe for a reversal. The USD Index, which is a key indicator of monetary policy divergence and driver of US corporate earnings growth, is currently testing an important support level. 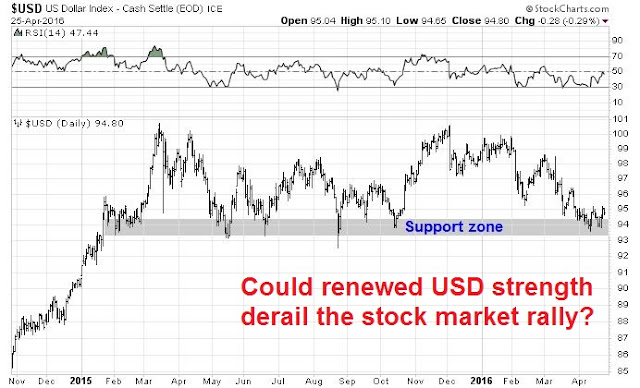 Hedge funds have reversed out of their crowded long in the USD and they are now slightly short. 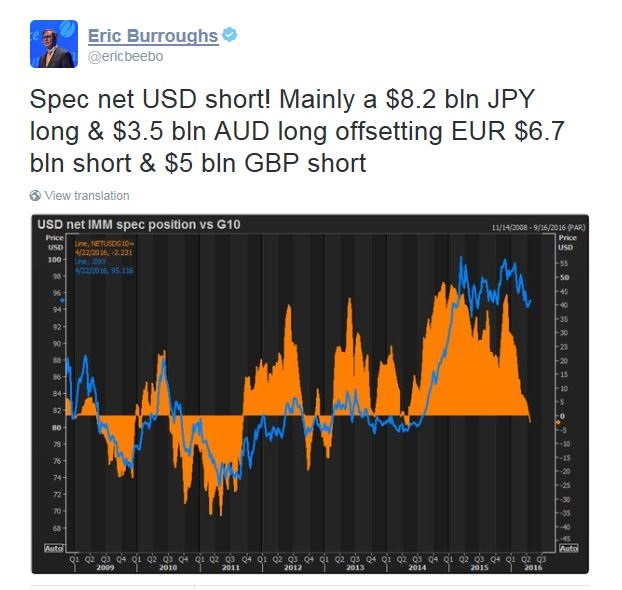 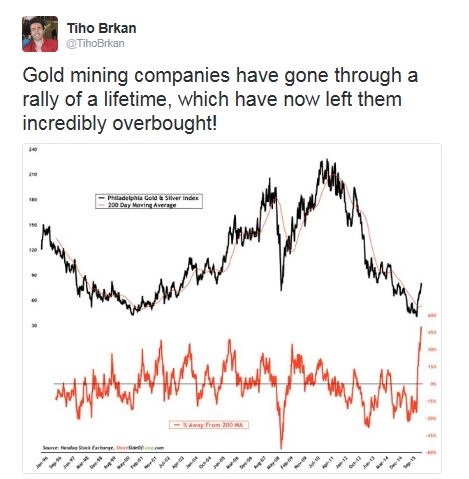 …while hedge funds are in a crowded long position in silver: 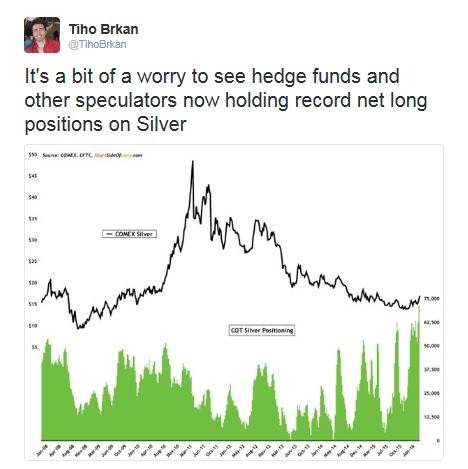 A less dovish message from the Fed this week has the potential to embolden dollar bulls and panic commodity bears.

How the FOMC works

When I talk to investors and traders, there seems to be a great deal of misconception about how FOMC meetings work. They think that the Fed governors and regional presidents all show up, talk about the economy and then decide on what to do.

An FOMC meeting is like an international summit of leaders and the Federal Reserve is a bureaucracy. Before the summit occurs, staff all talk to each other well before hand and craft a rough outline of the final communique. It is at the meeting of the leaders (or Fed governors and presidents) where the final language of the statement is tweaked. Everyone more or less already knows what will be said and the main focus of the statement has already been decided several weeks ahead of time, barring any last minute earth shattering changes in conditions.

Moreover, the members of the FOMC are all academics by training. Fed governors and presidents don’t just stand up and say, “I think ____”. Statements and conclusions need to be backed up by evidence and theory. When Janet Yellen pivoted to a more dovish view, she still has to justify it in academic terms. As an example, note how Yellen shifted her focus to how inflationary expectations are falling and at risk of becoming unanchored to the downside in a speech made on March 29, 2016:

Lately, however, there have been signs that inflation expectations may have drifted down. Market-based measures of longer-run inflation compensation have fallen markedly over the past year and half, although they have recently moved up modestly from their all-time lows. Similarly, the measure of longer-run inflation expectations reported in the University of Michigan Survey of Consumers has drifted down somewhat over the past few years and now stands at the lower end of the narrow range in which it has fluctuated since the late 1990s.

There is also a subtle imbalance of power at the FOMC that many observers are not aware of. A regional president can voice his opinion, but if he takes a “brave” contrarian stand, he needs staff to do the studies for him to make his case. But the Fed chair will have far more resources available in the than any regional Fed president. That`s why, in the long run, what the Fed chair wants, the Fed chair gets.

Ultimately, much of the direction of Fed policy depends on how Janet Yellen thinks. We do have some clues about her general approach from a recent round table discussion with Yellen and past Fed chairs Bernanke, Greenspan and Volcker in which she made the following points:

So when it comes to the balance of asymmetric risks, what weight does Yellen (and the rest of the FOMC) have on the following relative to current market perceptions?
The recovery in global markets, or…

The anemic statement of US industrial production and manufacturing? 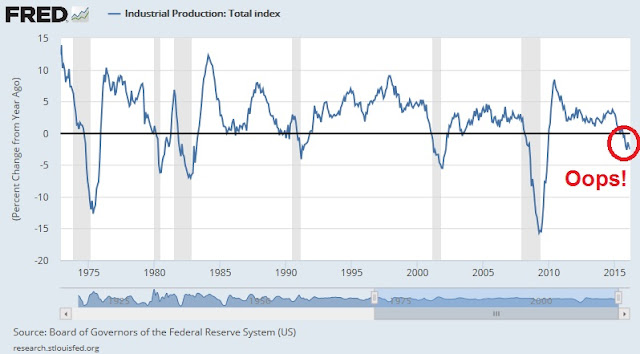 The signs of recovery in China, or Fitch’s warning about growing financial risks in China, which is also a warning echoed by the PBoC?
What about Mario Draghi’s signal that the ECB would likely stay on hold for the next few months, which would give the Fed cover to raise rates without putting excessive upward pressure on the EURUSD exchange rate because of monetary policy divergence?

Marc Chandler gave a rather dovish interpretation of global events by stating that current global conditions are as good as it gets. He cites a number of sources of near-term uncertainty:

I have no idea what the Fed will do, but here is what I am watching.

The key line in the FOMC statement will be the assessment of risks. If the Fed were to continue its dovish tone and its risk assessment is still deemed to be asymmetric and tilted to the downside, then my original thesis is correct and it’s up, up and away for the hard asset and resource extraction stock market sectors. In that case, we would likely see an upside SPX breakout to new highs, which would create a scramble as the shorts and under-invested funds buy into the market. On the other hand, if the assessment of risks shifted to a more balanced outlook, which is what many analysts expect to happen, then we will likely see a knee-jerk “sell in May” reaction. In that case, I will be watching the following two indicators to see if the weakness is genuine or an opportunity to buy on weakness.
First, what happens to the yield curve? The yield curve has been displaying a flattening pattern for close to a year, but it has started to steepen recently. A steepening yield curve, where the long dated bond yield rises faster than the short dated yield, is a reflection of market expectation of better growth. If the yield curve continues to steepen, then I would regard that any market weakness as a buying opportunity. Mr. Market is in effect telling me that the positive effects of higher growth will overcome the negative effects of higher rates.

As well, I will be watching the US junk and emerging market (EM) bond markets. If US junk and EM bonds continue to outperform Treasuries, then that is a signal that the market still has a healthy risk appetite. In particular, if EM bonds start to beat US junk (and EM tends to be inversely correlated to the USD), it would be a double confirmation that the market is not overly worried about the increased level of hawkishness. 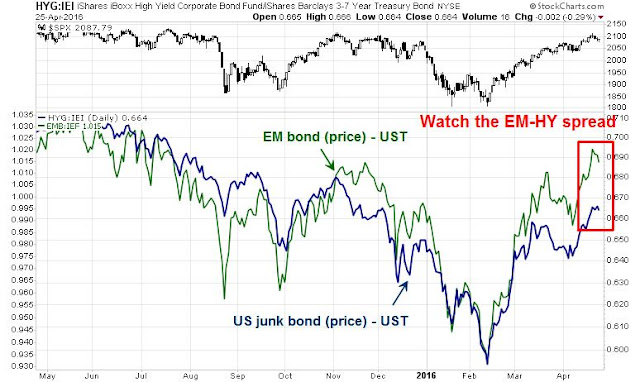 As investors and traders, there is only so much that we can forecast. We need to also draw up a plan to react to events. This is my plan on how to react to the Fed announcement on Wednesday and beyond.

12 thoughts on “What happens if the Fed gets less dovish?”