What is Mr. Market saying about Powell’s “global slowdown”? – Humble Student of the Markets 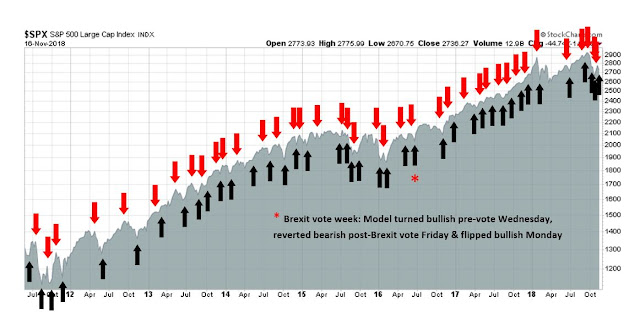 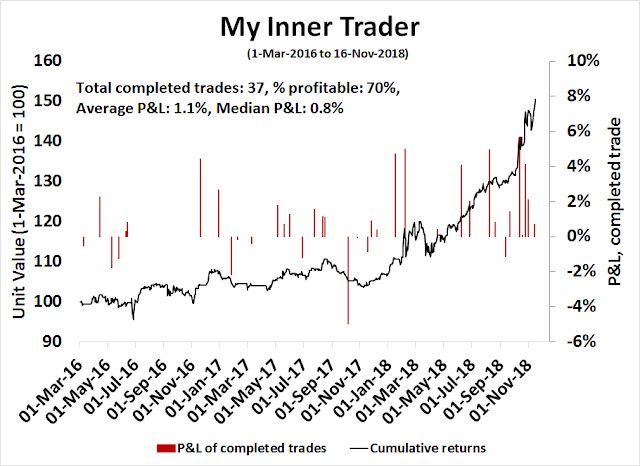 In a speech last week, Fed chair Jay Powell stated that while the American economy was performing well, he raised concerns about the effects of a global slowdown. His remarks highlights the importance of non-US markets, and it would be useful to take a brief tour around the world to see what Mr. Market thinks of the “global slowdown”.

A comparison of global equity market (top panel) and US equities (middle panel) shows some differences and similarities. 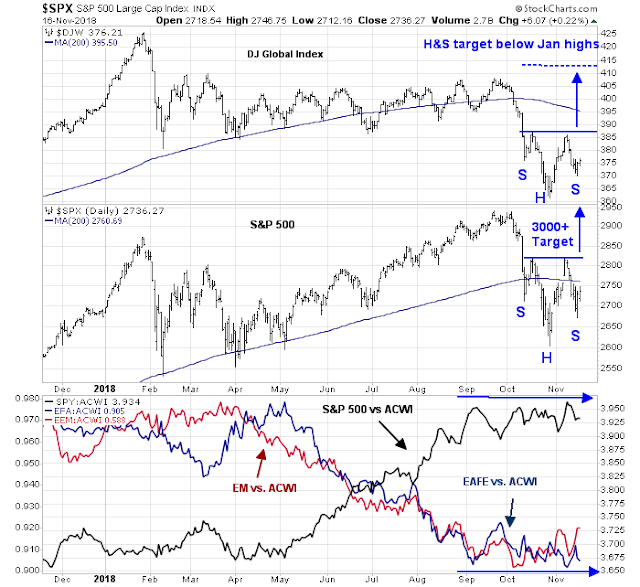 We can make a number of observations from this chart:

What follows is a more detailed review of global markets as we take a quick tour around the world.

Let’s begin in Europe. The chart of the Euro STOXX 50 and key core European markets are all in downtrends but displaying similar possible inverse head and shoulders patterns. There are some exceptions, such as Italy and Greece, which are not recovering as strongly , reflecting the special situations that these countries face within the eurozone. 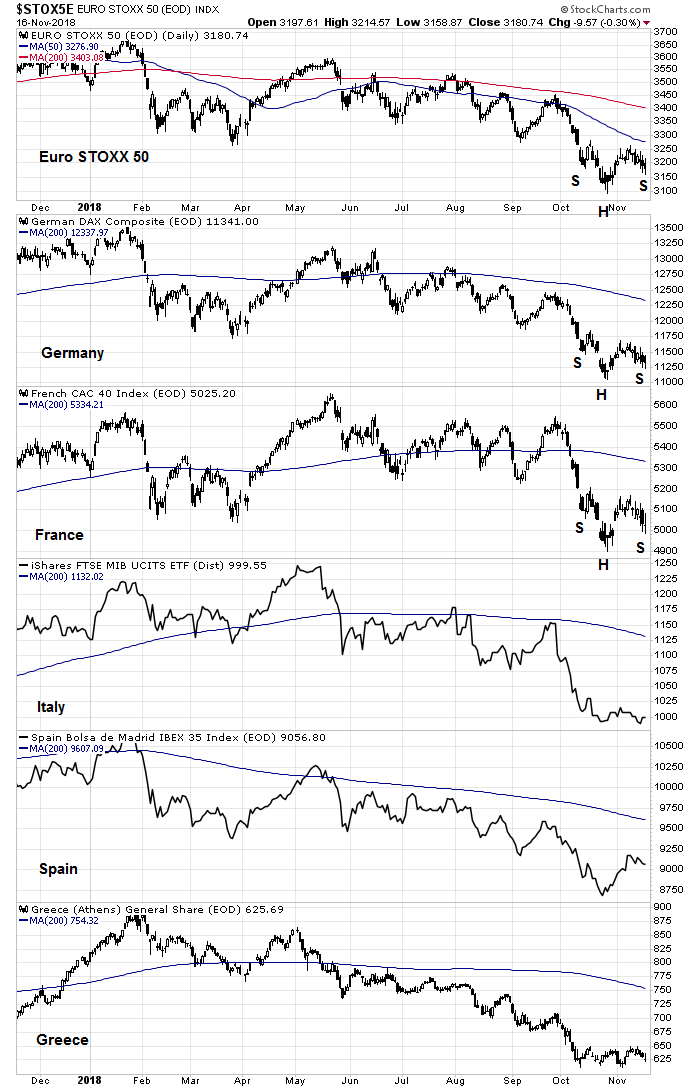 Across the English Channel, the chart below of UK stocks, as measured by the FTSE 100 and smaller cap FTSE 250 tell the story of the special situation in that country. The FTSE 100, which is composed of large cap companies with global reach, is exhibiting a possible inverse head and shoulders pattern typical of other global indices. However, the FTSE 250, which is composed of smaller companies more sensitive to the UK economy, broke down below its February lows, which is reflective of the market angst over the uncertainties of Brexit. 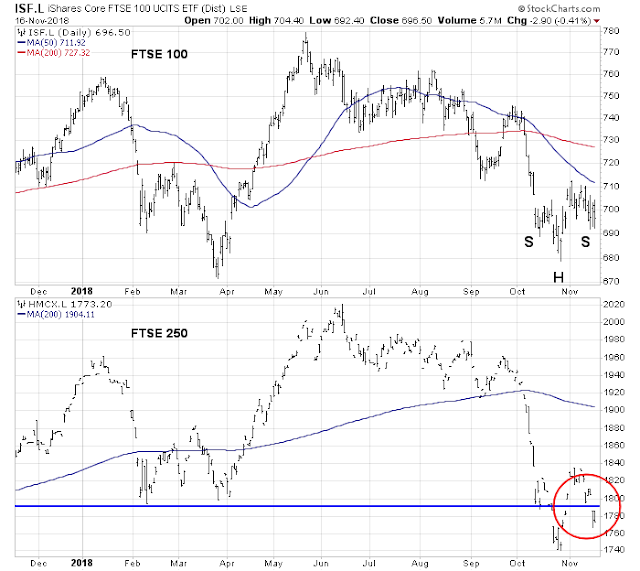 Over in Asia, the stock indices of China’s major Asian trading partners reveal similar downtrends but patterns of nascent inverse head and shoulders formations. The Hong Kong, Taiwan, Singapore, and Australian markets are all exhibiting these patterns in some form. The Shanghai market is an exception, but it seems to be trying to stabilize. 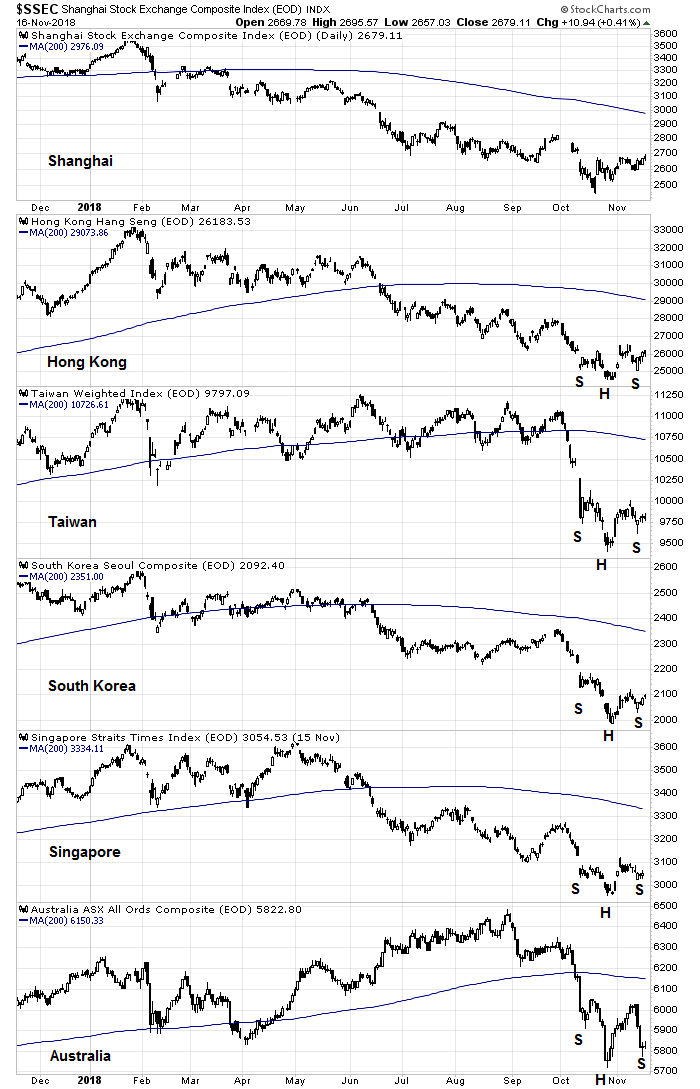 What about oil prices, which have recently cratered? A glance at the price of oil and commodity prices tell a different story. 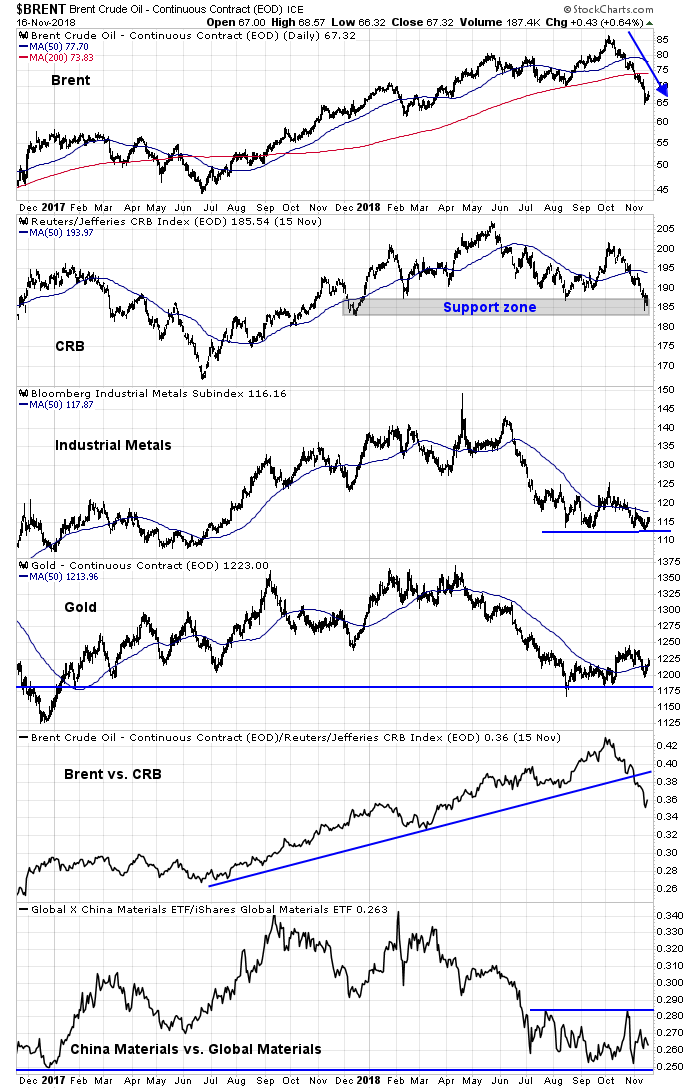 We can make the following observations from the above chart:

Chinese weakness can also be observed from the relative performance of EM stocks against ACWI. As the chart below shows, EM equities have broken out of a downtrend against ACWI (top panel). However, positive relative strength can be found everywhere except for China. While Chinese stocks are roughly flat against ACWI (second panel), relative strength is evident in the other EM regions, including the oil price sensitive Russia (bottom panel). 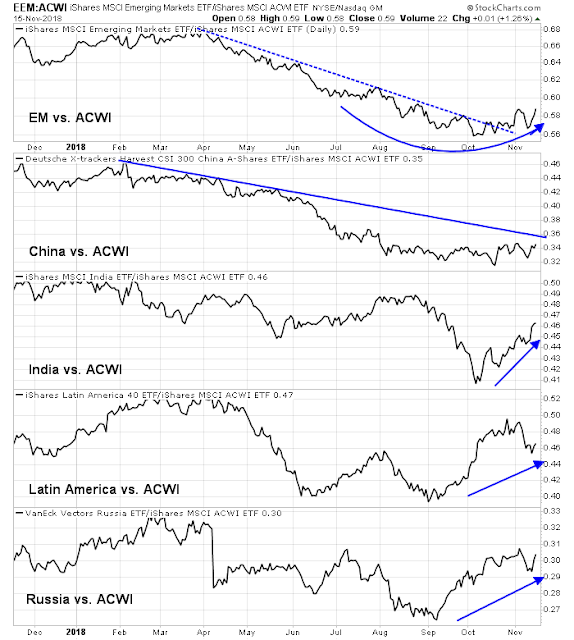 I suggested in a recent publication (see Was the market swoon made in China?) that much of the future market direction depends on China. This brief tour around the world indicates that may still be the case. Under those circumstances, expect further volatility based on newsflow on US-China trade negotiations.

A tactical rally ahead?

In addition to the sentiment indicators I cited in that post, the NAAIM Exposure Index, which measures the equity sentiment of RIAs, has fallen below its 26-week Bollinger Band indicating excessive bearishness. Historically, such episodes have seen equity prices rise shortly afterwards. 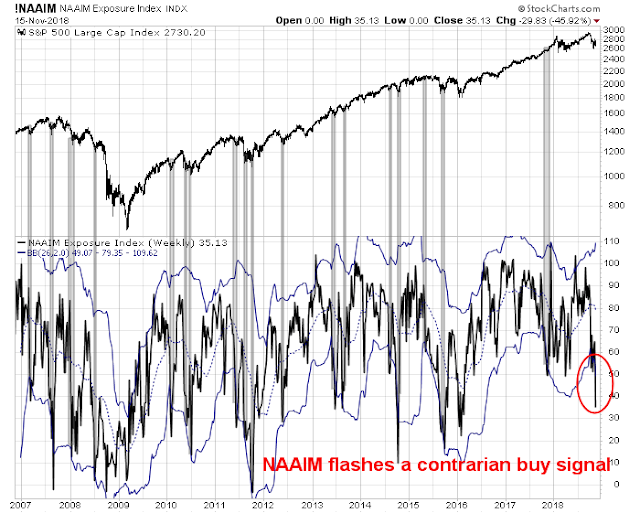 The Fear and Greed Index stands at 10, and these levels are consistent with readings seen at previous complex W-shaped bottoms. 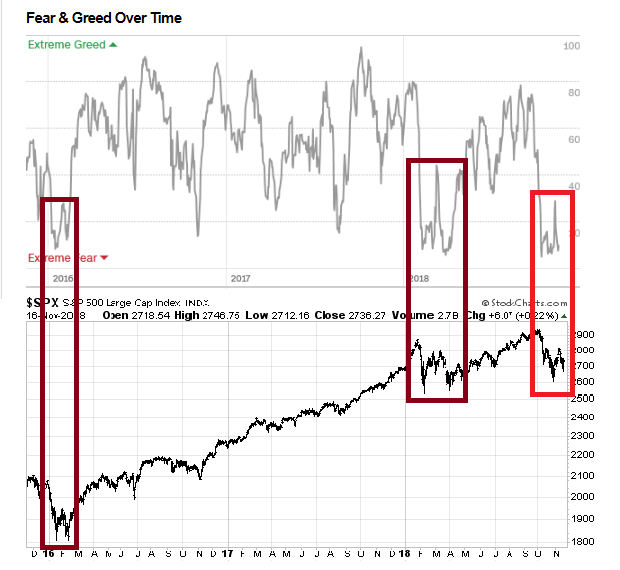 The 21 dma of the CBOE put/call ratio is at levels consistent with past tradable bottoms. 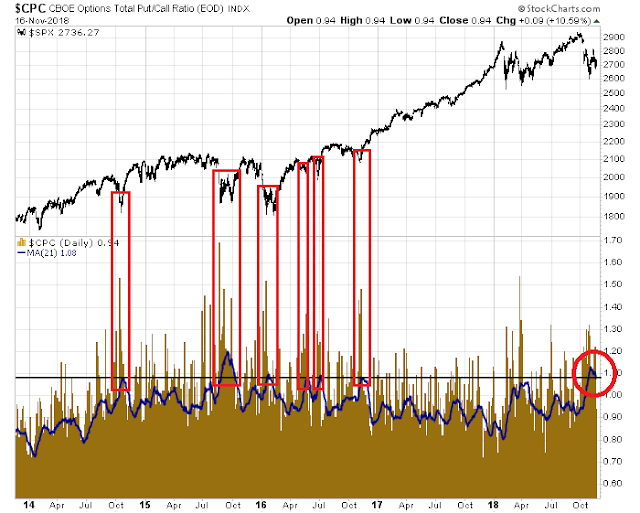 These are all strongly indicative of a stock market rebound lasting until year-end and possibly into January. However, I would not overstay the party. Global markets are all in downtrends, defined as trading below their 200 dma, and the DJ Global Index saw a MACD sell signal on the monthly chart in July. I would therefore expect lower prices after a brief relief rally. 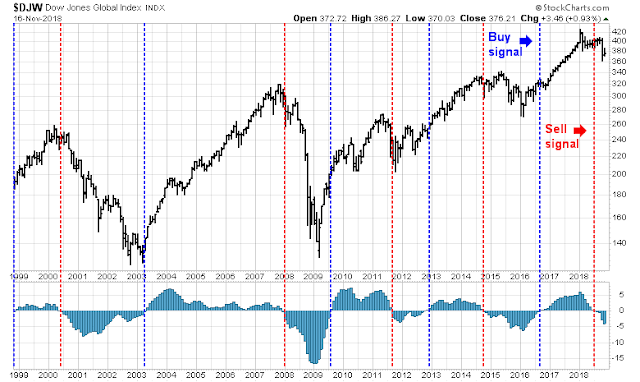 Looking to the holiday shortened week ahead, the SPX is poised to begin its year-end rally. The initial objective will be the neckline of the potential inverse head and shoulders formation at about 2820. Momentum is favorable as the index has exhibited a positive RSI divergence. However, if the market were to surge to test 2820 resistance next week, the rally is likely to fail as the VIX Index would probably fall below its lower BB, which would be the sign of an overbought market. 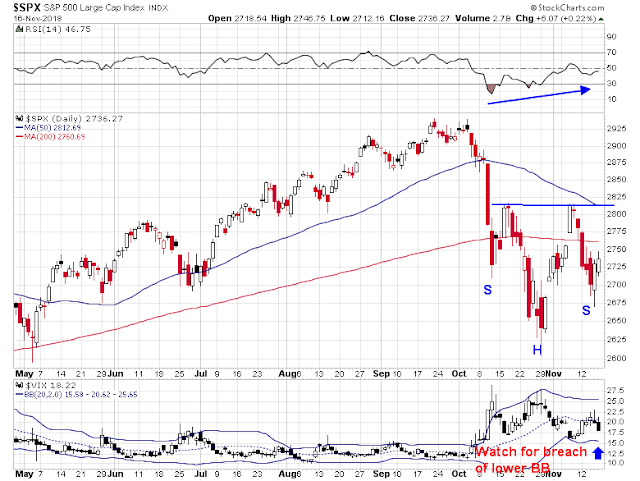 I would warn that the year-end rally may face some fundamental headwinds. The latest update from FactSet shows that EPS estimate revisions may be stalling. Forward 12-month EPS edged up an estimated 0.01% in the latest week after -0.12% the previous week, which may be a sign that of flagging fundamental momentum. On the other hand, the lack of upward EPS revisions may be a residual effect of the recent stock market weakness, as forward EPS has shown itself to be coincident with stock prices, and its weakness only serves as a fundamental signal of market strength or weakness. 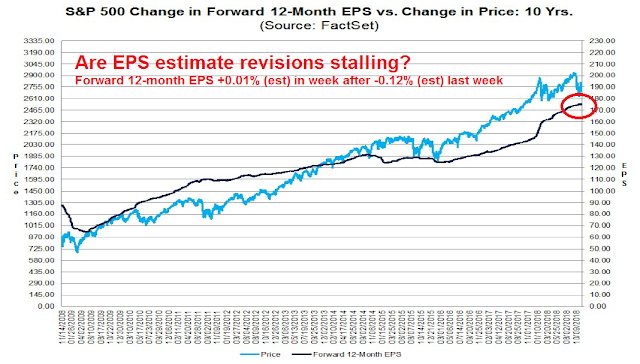 Short-term breadth indicators are coming off an oversold reading and exhibiting positive momentum, which is bullish. I will be watching this next week to see if it reaches an overbought level. 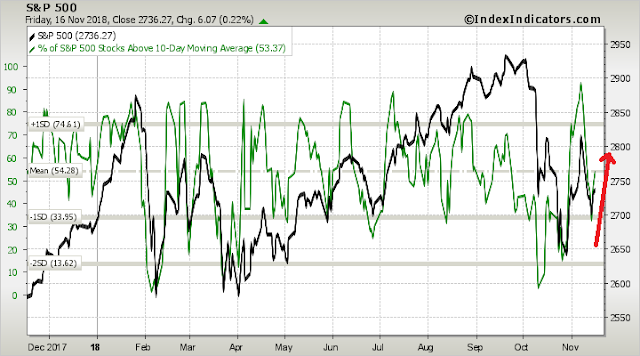 For the last word, I refer you to Jesse Felder. Felder found not one, but two possible head and shoulders formations in the hourly SPX chart. One breaks upwards, and the other breaks downwards. While he characterized it as a Rorschbach test for traders, it also represents an important lesson for technicians. These patterns are not complete until the neckline breaks, so be prepared. 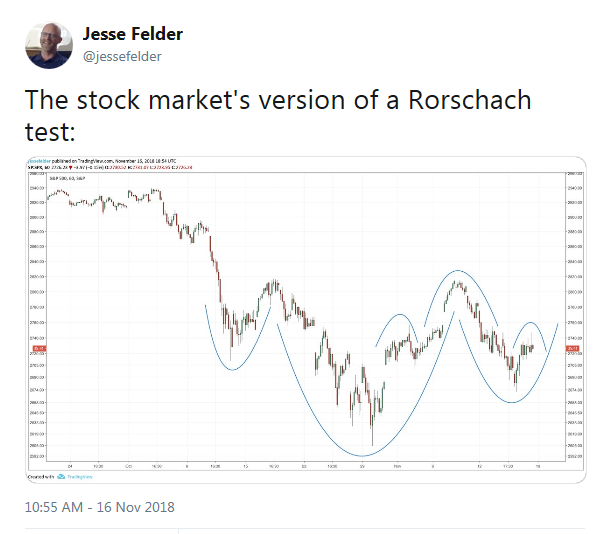 My inner investor remains cautious, and his equity weight is near his minimum risk level. My inner trader covered his shorts last Thursday and went long in anticipation of the start of a seasonal rally.

12 thoughts on “What is Mr. Market saying about Powell’s “global slowdown”?”