Could “animal spirits” rescue the Trump rally? – Humble Student of the Markets

A shift in tone

Well, that shift in tone came out of nowhere! It seems that as the focus shifted from “tax cuts” to “Obamacare”, the stock market began to lose steam and retreated. 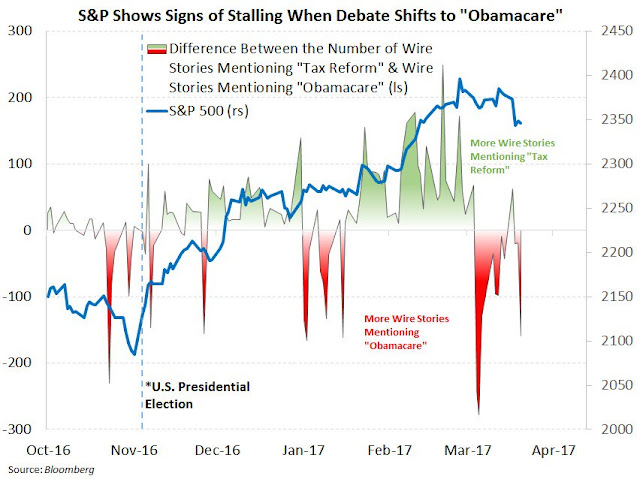 Before the bulls get overly discouraged, Main Street’s enthusiasm for the Trump agenda may spur enough growth to keep the Trump rally going. Megan Greene recently highlighted this now familiar chart of the large gap between soft (expectations) and hard (reported) data. 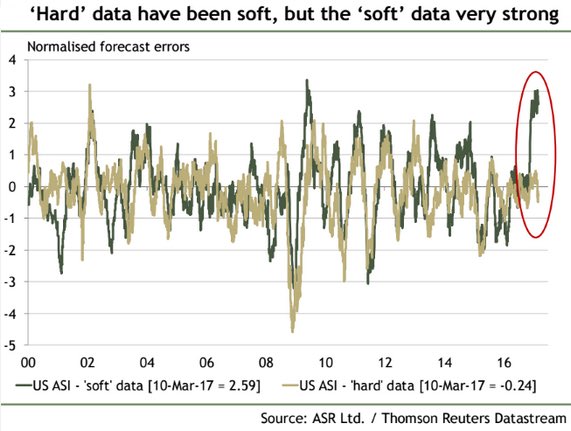 I had also raised the same question just after Inauguration Day (see Could “animal spirits” spark a market blow-off?“>).

A question of sentiment

As an example, the latest update of small business confidence from NFIB shows that confidence edged down slightly in February, but levels remains elevated after the surge after the election (annotations in red are mine). 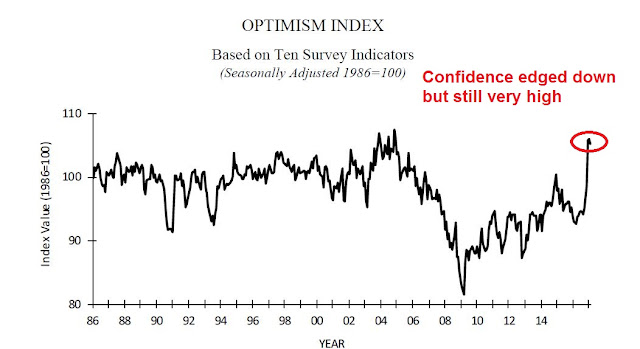 Here is the alternate view. When expectations are this high, it may be time to ask if expectations are excessive and therefore represent a contrarian sell signal. Indeed, the chart below shows that excessively high levels of University of Michigan Consumer Sentiment have been signals of cycle and stock market peaks. 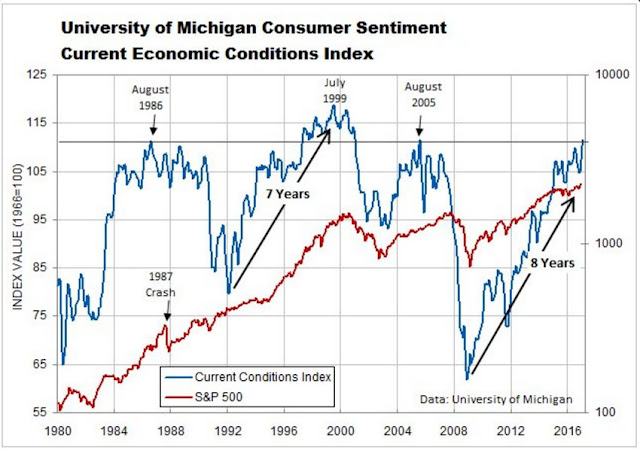 Michelle Meyers at BAML published a comprehensive analysis of the bifurcation between confidence and spending. Not surprisingly, consumer confidence rose the most in the regions and demographics that went for Trump in the election.

The biggest gain in confidence was among those aged 55+ where confidence climbed by an impressive 25 points since October. In contrast, those aged 35 – 54 saw a more measured 9.2 point gain while those under the age of 35 are feeling worse with confidence down 7.8 points. 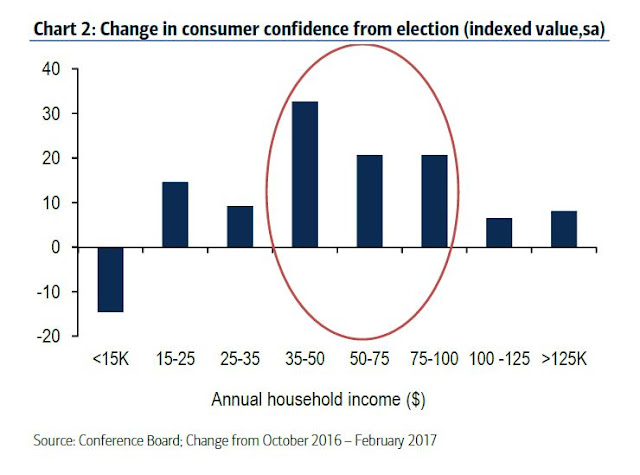 However, the people with the greatest gains in confidence were not the ones with the most money to spend. Meyer believes this divergence is setting up for a disappointment in expectations.

We find that the cohorts that have seen the biggest gains in confidence are not the main drivers of spending. This could help explain some of the divergence between strong sentiment and trend-like consumer spending. Using the BLS Consumer Expenditure Survey, we find that the bulk of consumer spending – 42% as of the end of last year – is done by middle-aged households (35 – 55 years old). The youngest and oldest cohorts make up about 30% of spending each. In other words, the strong gain in sentiment among the older cohort is offset by the deterioration in sentiment among the younger generation.

The split in spending by income group is even more extreme. Nearly 40% of consumer spending is done by the highest income quintile (the top 20% of the income distribution). In contrast, the middle quintile only makes up 16% of total consumer spending. The higher income households have only had a measured increase in confidence in contrast with the jump in confidence among middle-income households. This tells us that the cohort with the greatest ability to spend is not feeling quite as confident as the aggregate surveys show. 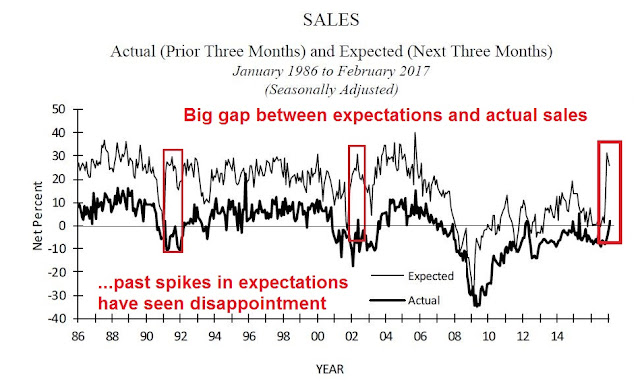 In its February statement, NFIB president Juanita Duggan stated: “Small businesses will begin to turn optimism into action when their two biggest priorities, healthcare and small business taxes, are addressed. To small business, these are both taxes that need reform. It is money out the door that strangles economic growth.”

Ummm, the Obamacare repeal initiative has gone down in flames. Maybe small business owners can look forward to lower tax rates in the future…

From a macro perspective, one of the key hurdles to growth is capital investment to spur productivity. But there may be an additional snag. NFIB reported that small business owners were having difficulty hiring and retaining qualified staff. “Many small business owners are being squeezed by this historically tight labor market. They are not confident enough to raise prices on consumers, which limits how much they can increase compensation and makes them less competitive in attracting qualified applicants.”

At the same time, the Atlanta Fed’s Macroblog reported that businesses found that a big hurdle to capital investment was qualified staff to run the machines. 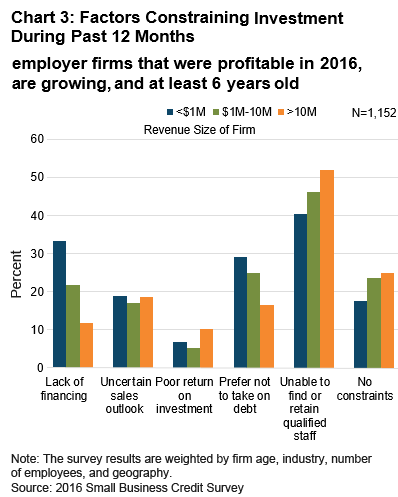 You see the problem here. The economy needs companies to invest in more, but companies aren’t willing to invest because they can’t find enough people. Moreover, businesses are having trouble raising prices in order to compete for talent. Instead, their margins get squeezed, and they don’t want to expand.

In reality, this sounds like the characteristics of a late cycle expansion. Moreover, the latest release of Markit US PMI saw some growth deceleration, which is consistent with Q1 GDP growth at the 1.7% level (via Markit). 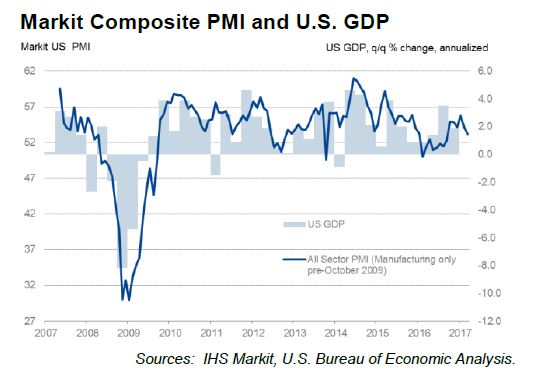 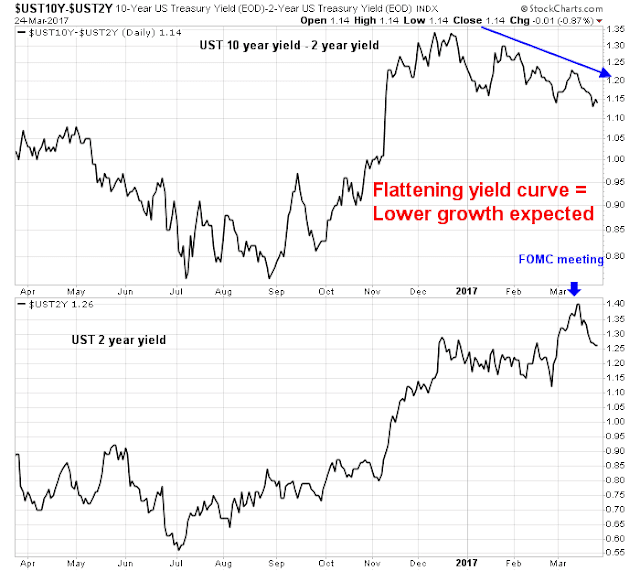 In effect, the surge of optimism underlying much of the Trump rally is over. But does this doesn’t mean the bull market is over.

The bulls can be comforted by the following factors which can put a floor on stock prices. Firstly, the post electoral Trump rally was not just spurred by the expectations of tax cuts and deregulation. The fundamentals had been improving before the election – and the scope was broad and global.

I had already written about the growth tailwinds from China (see China’s revival and what it means), but the surge in growth can be found in Europe a well. Friday’s release of European PMIs surprised to the upside, which bodes well for employment and growth in the eurozone. 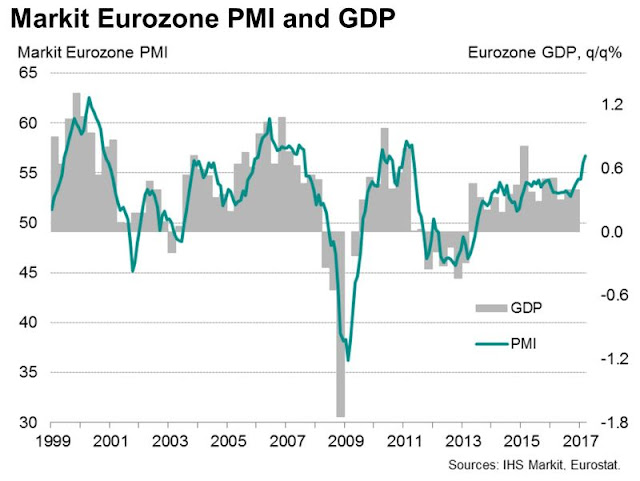 In the US, the latest update of forward 12-month EPS estimates from Factset have kept on rising, which reflect greater optimism about improving fundamentals (annotations are mine). 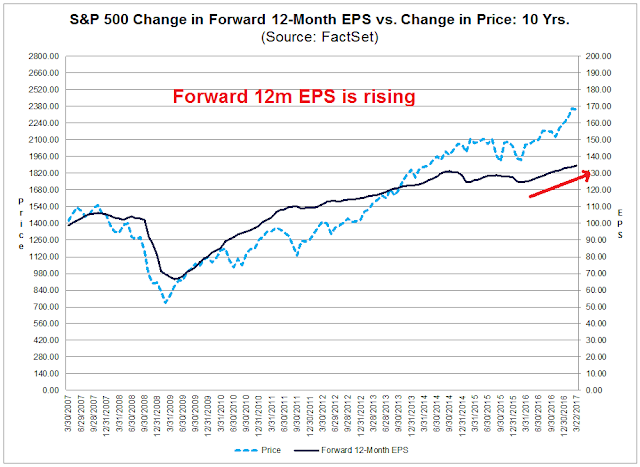 Sure, the market looks pricey based on forward P/E. However, a 5-10% correction would put valuation back into a reasonable level. (If you are afraid of a 5-10% pullback, then equity investing not for you). 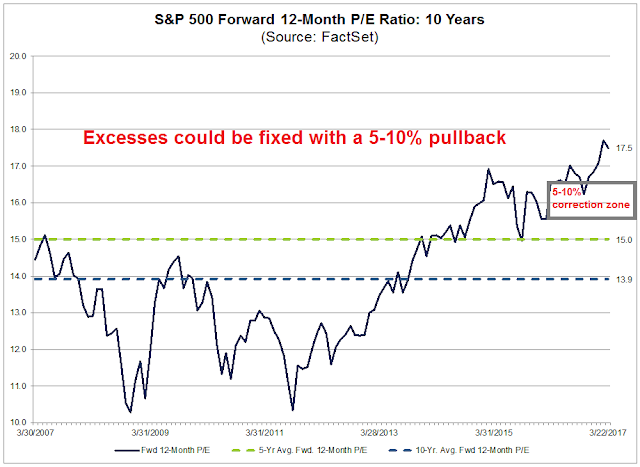 In addition, investors should see better news in the near future. The market’s focus is likely to shift back to tax reform by May, according to Trump’s budget director Mick Mulvaney (via Reuters):

A detailed version of President Donald Trump’s budget to be released in May will lay out plans to eventually erase U.S. deficits, White House budget director Mick Mulvaney said on Sunday.

“We’re getting into that now. By May, I think it’s mid-May we’re shooting for right now, we’ll have that larger budget…” Mulvaney said on NBC’s “Meet the Press” program.

In addition, Bloomberg reported that Treasury Secretary Steve Mnuchin is aiming for a complete tax overhaul proposal by the August recess, though he acknowledged that the August deadline might be overly ambitious. Bottom line, the market will be thinking about tax cuts again by May. The subtext of the failure of the Republican controlled Congress to repeal ACA is that while it will make tax reforms more difficult, it makes a simple package of tax cuts, such as offshore cash repatriation incentives, more easily achievable. That’s a very bullish outcome.

As well, we should see some better news from Europe. The second round of the French presidential election is scheduled for May 7. The first round of voting will occur on April 23, and the top two candidates with the most votes will go to the second round. Despite all of the nervousness about populism in Europe, centrist Emanuel Macron is expected to prevail over Marine Le Pen. As this chart of the OATs-Bunds spread shows, political risk is falling and the market is already starting to discount a Macron victory. 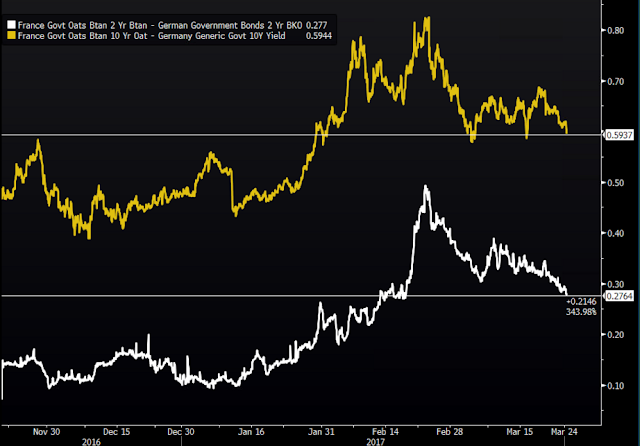 The latest update of insider activity from Barron’s shows this group of “smart investors” remain relatively upbeat on stocks. This, along with the other factors mentioned so far, should keep any corrective action relatively shallow.

Don`t panic. It`s only a minor correction, not the start of a major bear market.

However, expect some choppiness in the near term. The SPX has suffered some technical damage by violating a key uptrend. Such episodes usually resolves themselves with either a period of sideways consolidation or correction. The most logical first support level would be the 50 days moving average, currently at 2330. After that, the first Fibonacci retracement target is at 2280. 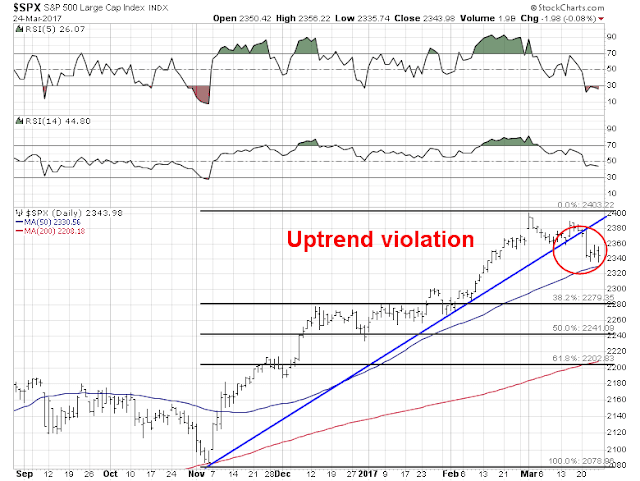 On an intermediate term basis, then there just doesn’t seem to be enough fear to make a durable bottom. I wrote about some bottom spotting models for traders last week (see Three bottom spotting techniques for traders). None of those models have flashed fearful oversold readings yet.

Indeed, the CNN Money Fear and Greed Index has been falling and stood at 30 as of Friday’s close. Historically, the market has bottomed with this index falling below 15. 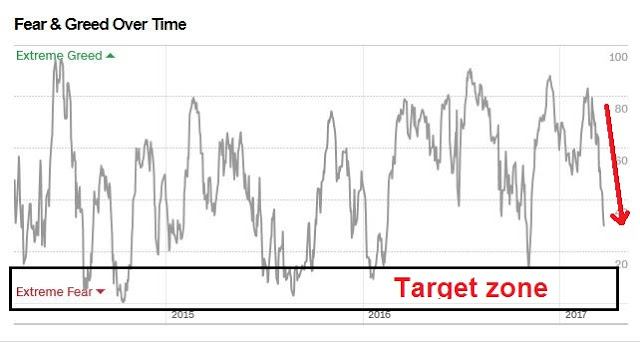 Various measures of risk appetite have been rolling over and they are now in decline. Until these metrics start to form a bottom, it’s hard to call the end of the correction. 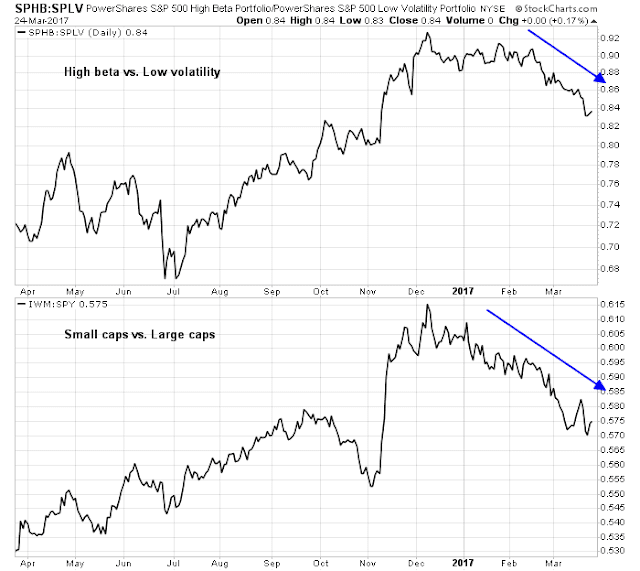 Tactically, we have to allow for the possibility that the market may fake out bulls and bears alike by rallying up to test its highs before falling again to make a final corrective low. Ryan Detrick of LPL Financial pointed out that the SPX saw its first 1% drop after a 109 trading streak without a 1% drop. Though the historical count is low (N=12), such episodes has typically seen a strong rebound afterwards. 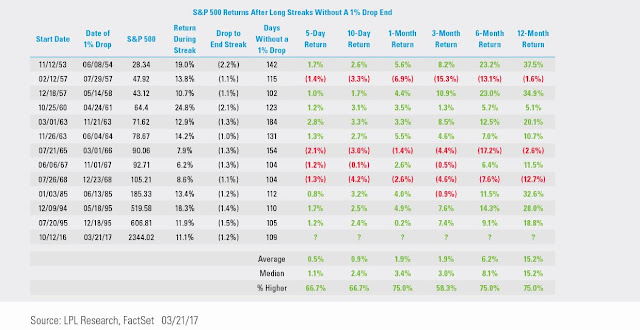 In all likelihood, the correction isn’t over but volatility is rising. Longer term, however, the broad based Wilshire 5000 remains on a buy signal. These conditions are consistent with a correction in an uptrend. 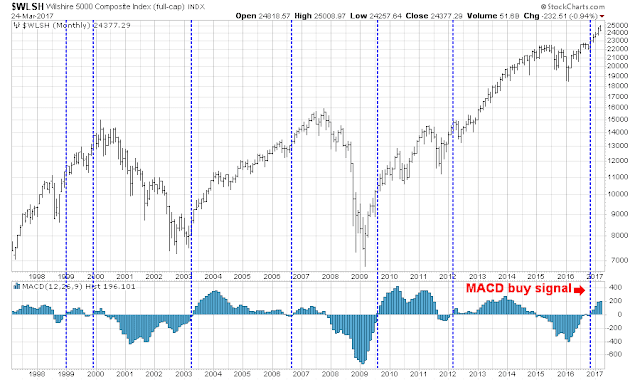 My inner investor remains bullishly positioned. He expects further highs in the major indices once the market gets over its current bout of anxiety. There are no signs of a recession on the horizon – and recessions are sure fire bull market killers.

My inner trader remains short (see Sell St Patrick’s Day?). However, he is getting ready to resize his positions and to recalibrate the risk profile of his holdings in light of the probable higher volatility ahead.

Two broad possibilities exist for the week ahead. A bear flag may have formed in the SPX hourly chart late last week, which broke down with bearish implications. He is watching to see if the market breaks support, defined as the lows of last week. A support break would have bearish implications, with targets at the 50 dma (2330) and further at the Fibonacci retracement level of 2280 (see above). 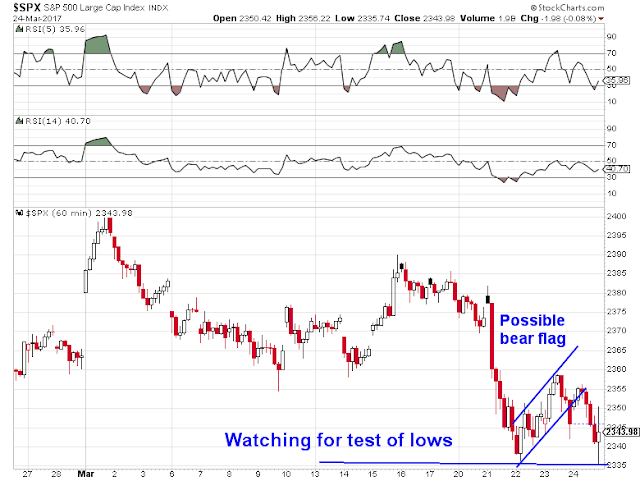 On the other hand, should support hold and the market rallies, we could also see a possible test of the highs before the correction is complete (see Ryan Detrick analysis above).

5 thoughts on “Could “animal spirits” rescue the Trump rally?”