I am not bearish!

First of all, I want to set the record straight. Despite the headline about a possible US stock market top in 2016, I am not intermediate term bearish on stocks right now.

There is an adage amongst technical analysts that while bottoms are events, tops are processes. The purpose of this post to outline the process of how the US equity market is likely to top out in 2016. I don’t mean to convey the impression that I believe that equities go down right away. In fact, there is likely some upside left before the market makes its ultimate top before turning down. Let me explain.

Historically, US equity bear markets have begun for two reasons:

The most recent readings from my Recession Watch show the recession risk in the next 12 months is low. However, I am far more concerned about the possibility of an overly aggressive Fed in 2016. A reflationary storm is appearing on the horizon. The Fed could easily find itself behind the curve. Monetary policy then becomes tighter and faster than anyone expects, which will spook markets and possibly push the economy into a recession.

My base case scenario calls for the equity market to top out in either Q2 or Q3, but that projected timing is at best a wild-eyed guess. There are too many moving parts and too much uncertainty for my scenario to be a definitive forecast.

The anatomy of a late cycle top

In the past few weeks, I have repeatedly made the case that the US economy is undergoing a late cycle expansion. This post is really a way of putting all pieces of the puzzle together and to show how a late cycle expansion transitions into an economic slowdown.I wrote about Jim Paulsen’s analysis of how market sector leadership changes to reflect rising inflationary expectations once the unemployment rate falls to 5.0%, which is where it stands today (see The 2016 macro surprise that no one talks about). This approach has spotted five of the last six market downturns since 1968. 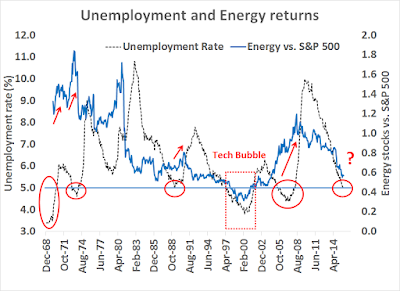 I have also highlighted analysis from Scott Grannis about how the market is underpricing inflation risk (see Markets may be underestimating inflation). 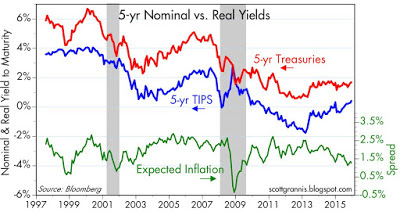 With core CPI running at about 2%, current inflationary expectations of 1.25% is in effect discounting further declines in oil prices, which seems to be an unrealistic assumption. From a technical perspective, oil prices are falling but it is experiencing a bullish RSI divergence. If the credit market is extrapolating further oil weakness, it may be in for a rude surprise in the near future. 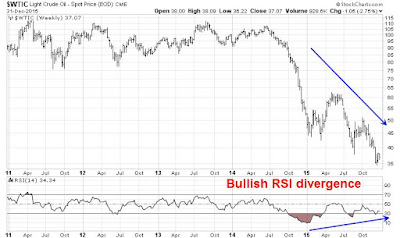 I also documented how the current economy and market environment are evolving into a late cycle expansion, where inflationary pressure start to rise (see Profiting from a late cycle market and How the market can rise (and commodities rally)). However, market expectations indicate that the current trend of USD strength and falling commodity prices will continue. A recent post detailed the latest BoAML Fund Manager Survey indicating that global institutional fund managers are in a correlated and crowded disinflationary macro trade, consisting of long USD, short commodity stocks and short emerging market equities (see Do you believe in Santa Claus). 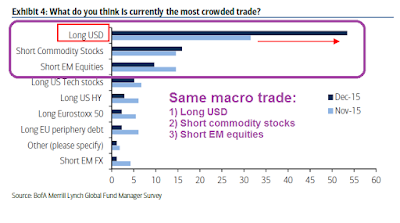 Indeed, the latest analysis from Dana Lyons confirms the crowded trade and shows that gold speculators have all but given up on the precious metal. 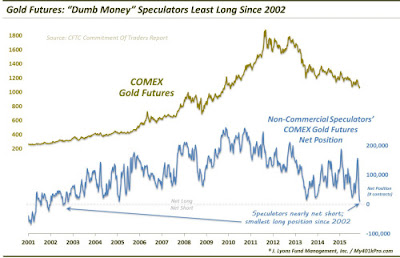 When I put it all together, it suggests that the market and the economy is in for an unexpected inflationary shock. As the market adjusts to the new reality in 2016, the big question is how the markets and the Fed react to these developments.

The Fed is what I am most worried about. The risk of policy error is high. Tim Duy recently penned a post about uncertainty over the Fed`s reaction function to the shape of the yield curve, which reflects market expectations of monetary policy and expected inflation. Duy indicated that the Fed`s reaction function to backward looking economic statistics such as employment and inflation are fairly well known, but he was unsure of how it is likely to react to changes in market expectations:

While much attention is placed on the Fed’s failure to respond more aggressively to slowing activity and deteriorating financial conditions in 2008, I lean toward thinking the more grievous policy error was in the first half of 2006 when the Federal Reserve kept raising short rates after the yield curve first inverted in February of that year: 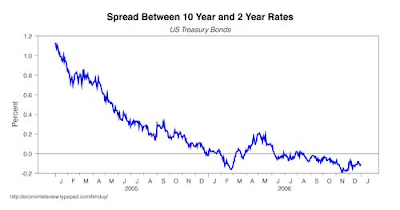 and despite clear evidence of slowing economic activity and increasing financial stress.

If inflationary pressures tick up, what will the Fed do?

There is another major wildcard: how will currency markets will react to global developments. Bloomberg featured a terrific interview with David Woo, the chief currency strategist at BoAML (starts at about the 4 minute mark). I summarize the points that Woo made as follows: 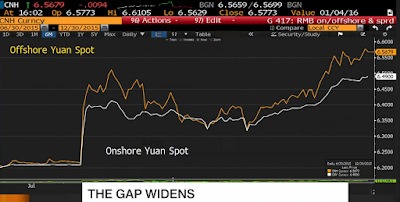 David Woo’s highlights another important unknown: What will the USD do in the next few months? The USD is also an important driver of stock prices. Many US companies have cited USD strength as a headwind in their earnings calls in the last year. As the chart below of the Trade Weight Dollar shows, those headwinds should significantly diminish in Q1. Should the USD begin weaken, currency effects would turn into a tailwind for earnings and therefore be bullish stock prices. 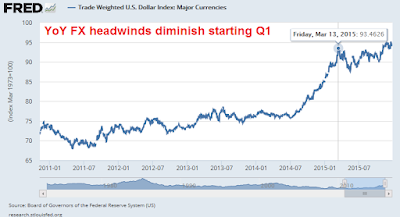 I have also been closely monitoring the following chart as an important indicator of market direction. The USD (top panel, inverted scale) and the relative performance of Materials stocks (bottom panel) are range-bound, while the relative performance of energy stocks (middle panel) is still in a downtrend. I am watching carefully for signs of upside breakout in each of these charts before making a serious commitment to a trade. 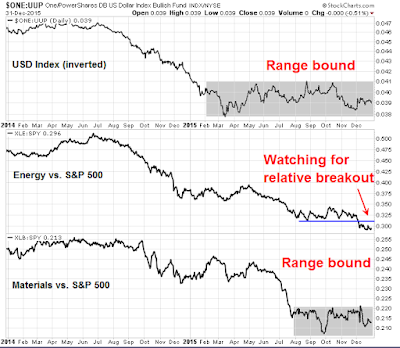 A roadmap, not a forecast

To summarize, what I have sketched out is the process of a market top. This not a forecast, but a roadmap as there are too many moving parts and the timing of each element is too uncertain.Here is how I think 2016 will play out. Cost-push inflationary pressures tick up in the form of higher wages, which feeds into higher commodity prices, This reflationary development is  positive for stock prices as it would alleviate some of the anxiety over the poor performance of junk bonds, especially if the USD declines and boosts the earnings of US exporters. Over time, rising inflationary expectations spooks the bond market and the Fed reacts. The Fed perceives that monetary policy is behind the curve and tightens aggressively, perhaps to the point of a yield curve inversion, which results in a recession.Should the economy roll over into recession, I highlighted in past posts that possible landmines planted in the current cycle. The next recession could be very ugly (see Why the next recession will be very ugly and Cheap or expensive? The one thing about equity valuation that few talk about).

The big unknowns are timing and amplitude. My base case scenario calls for a stock market top in Q2 or Q3, but that’s nothing more than a guess at this point. Ambrose Evans-Pritchard laid out a similar case of reflationary pressures, but portrayed 2016 as the “sweet spot” for growth and postulated the ugliness won’t happen until 2017. His scenario is also well within the realm of possibility.

The biggest question to be answered is the reaction of the USD to market and economic developments. If greenback strength continues, then it could dampen the volatility and stretch out the length of the topping process. Commodity inflationary pressures would be more muted and the Fed’s response will be as well (because a strong USD would be a form of monetary tightness). On the other hand, if my base case scenario of a USD pullback, commodity inflation comes true, then rising inflationary expectations will become far more evident and it will create pressures for a stronger response from the Fed.

What happens next? I have no idea. My crystal ball is out at the shop for repairs. All I can do is to watch for signs of a change in the character of the markets, in the form of market leadership (late cycle sectors, value vs. growth, etc.) and monitor how the bond and currency markets evolve over time.

As I peer into the first week of 2016, the market action last week was highly disappointing for the bull camp, especially in light of the fact that the market was undergoing a period of positive seasonality,. Santa came and left, but his presents weren’t all that exciting. Moreover, the vaunted January Effect of a small cap rebound has been fading in the past few years, so don’t expect much in the way of fireworks there (see The reason why the bulls should be cautious about a January hangover).
Despite these bearish headwinds, it is difficult to envisage a serious pullback of 5% or more as sentiment is likely to put a floor on stock prices. The latest NAAIM survey of RIAs show that advisors have become increasingly bearish, which is contrarian bullish. 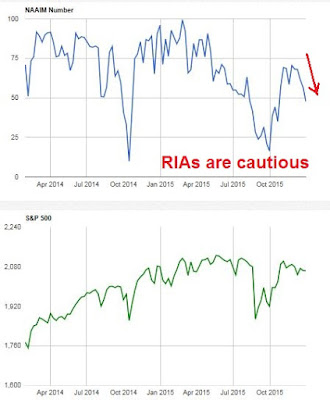 On the other hand, the latest data from Barron`s show that “smart money” insiders continue to buy stocks.

In the meantime, breadth indicators from IndexIndicators show the market to be retreating from an overbought condition. Readings are neutral but momentum is negative, which tells me that the bears are in control of the tape. 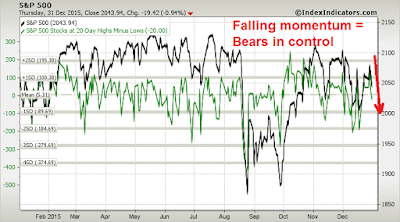 Current market conditions are suggestive of choppiness in the days ahead, which will be frustrating for both bulls and bears alike.
My inner investor remains invested with a tilt towards resource sectors. My inner trader is long equities, but he is seeking to sell on strength and buy on weakness should the market get to an oversold extreme.
Disclosure: Long SPXL, TNA