In my last post, I wrote about the possible appearance of a rare Zweig Breadth Thrust buy signal this week (see The 2016 macro surprise that no one talks about). Tuesday was the last day in the 10 day window for the ZBT buy signal to be triggered. Alas, it doesn’t seem to have happened. 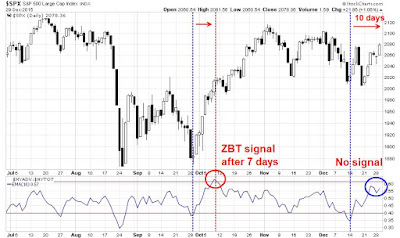 So where does that leave us? The near term outlook for the bulls is still constructive, as the market has rallied through a key downtrend line (shown above). Moreover, we are still in a period of seasonal strength.

However, bullishly oriented traders should be wary about overstaying their welcome. The Santa Claus rally was nice but the party is starting to get out of hand. The neighbors have called the cops and they are due to arrive very soon.

One of the arguments for a continued near term bullish impulse is the so-called January effect, which is explained by a snap back from tax-loss related selling in December. This CNBC article document was written last year and it is slightly dated, but it nevertheless documents the diminishing power of the January effect. In short, most of the outperformance in January occurred in the 1980’s and 1990’s. January returns in the last 10 years have been nothing to write home about. 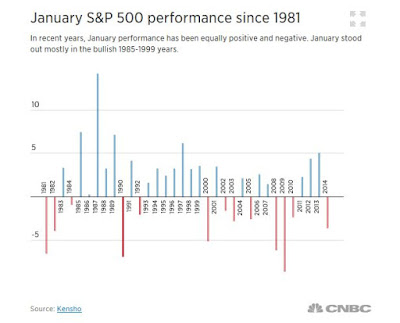 I went back to 1987 and studied the average returns of the SP 500 large caps (SPX) and Russell 2000 small caps (RUT). I found that while the markets seemed to have benefited from a December Santa Claus rally, January returns have been fairly ordinary. 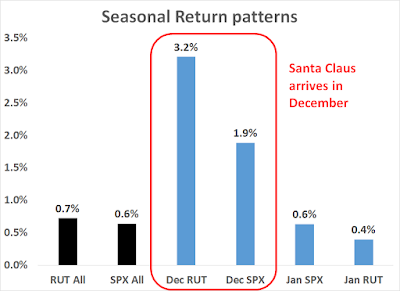 What about a snap back from tax loss selling? Could stocks perform better if we had a down year? I studied average stock returns based on whether the RUT was positive or negative on a YTD basis as of November 30. What I found was highly unexpected. Small cap stocks performed better in December as a whole and paradoxically did worse when November YTD was negative. In effect, ther was no small cap January effect. However, there was a minor large cap January effect as the SPX did perform better when RUT was negative YTD to November. That results seems somewhat dubious and illogical and I would attribute it to noise in the data. 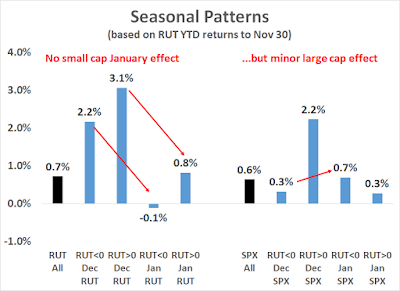 What about small cap outperformance in January? If there was tax loss selling, could small caps perform better in January?

The chart below shows the small – large cap return spread in December and January, based on RUT YTD returns to November 30. The data shows that average small vs. large cap spread actually perform worse in January when RUT is down YTD to November. 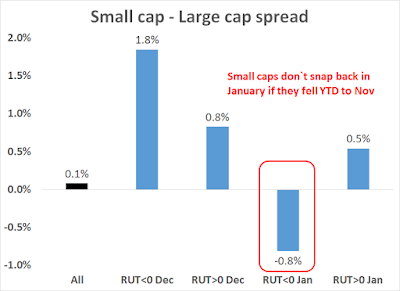 So much for the January effect.

In addition, bullish traders face additional headwinds in January. This chart from Goldman Sachs (via Business Insider) shows that the pace of share buybacks tend to drop dramatically in January. That removes another key source of demand for equities during this period. 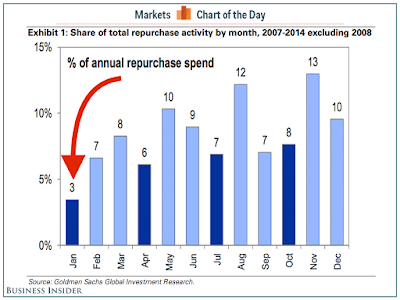 In conclusion, had another ZBT buy signal been triggered, my inner trader would have gone all-in on the long side of the market. Instead, he is turning more cautious. While the combination of short-term seasonal strength, a bullish impulse that broke both a downtrend line and the 50 and 200 dma are to be respected, the market is nearing overbought readings, as measured by RSI5. 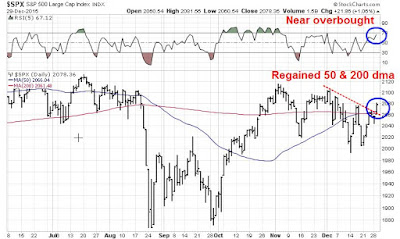 As well, this chart from IndexIndicators of the net 20 day highs-lows is in the overbought zone (red dot is my estimate), which is an indication that upside is probably limited. 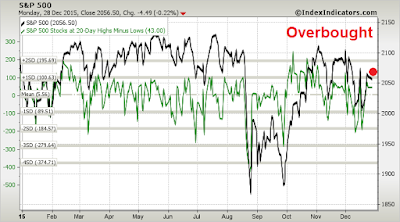 Bottom line: The bulls shouldn’t overstay their welcome during this seasonal rally. Start edging towards the door before the cops show up and raid the party.