A time for caution, or contrarian buy signal? – Humble Student of the Markets

Recently, a number of major investment banks have published warnings for the US stock market. The strategists at BoA, Citigroup, Credit Suisse, Deutsche, Goldman Sachs, and Morgan Stanley have issued either bearish or cautionary outlooks.

On the other hand, Ryan Detrick at LPL Financial documented the effects of strong price momentum on stock prices.

History says that great starts to a year tend to see continued strength the final four months. “Looking at the previous top 10 starts to a year ever, the final four months have gained eight times,” explained LPL Financial Chief Market Strategist Ryan Detrick. “So should we see any seasonal weakness, we’d use it as an opportunity to buy before likely continued strength.” 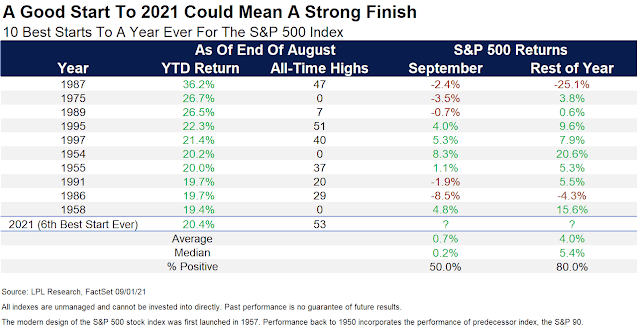 In these circumstances, I am reminded of Bob Farrell’s Rule 9, “When all the experts and forecasts agree – something else is going to happen.” How should investors react? Turn cautious, or is this a contrarian opportunity to buy the dip?

As I see it, there are several challenges and open questions for equity bulls. The most important question is whether companies can maintain the forward earnings momentum exhibited in the past year. FactSet reported that forward 12-month EPS estimates are still rising strongly. Rising estimates are supportive of better stock prices because the E in the forward P/E ratio is advancing. Can it continue? 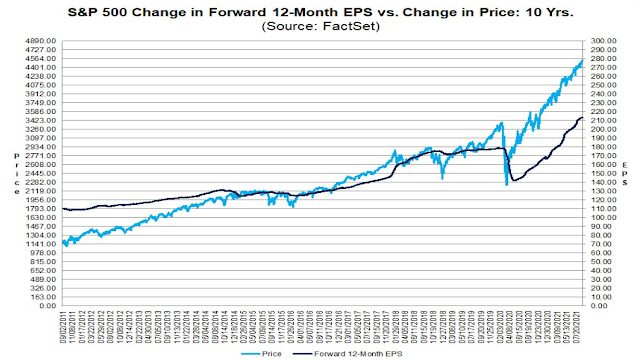 John Butters of FactSet reported that Q3 estimates have bucked the usual trend of downward estimate revisions and rose instead. 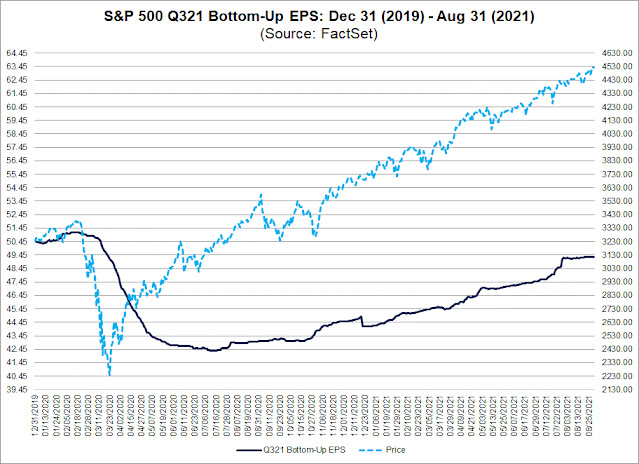 As we approach the Q3 earnings season which begins in October, can EPS growth maintain its momentum? What will companies say in their earnings calls about the outlook?
That’s an important open question that’s yet to be resolved.

To resolve that question, here is where top-down macro analysis can supplement the bottom-up company analyst view. GDP growth forecasts are stalling. Q3 growth forecasts are rolling over while Q4 growth has flat lined. These are conditions not friendly for the Q3 and Q4 earnings outlook. 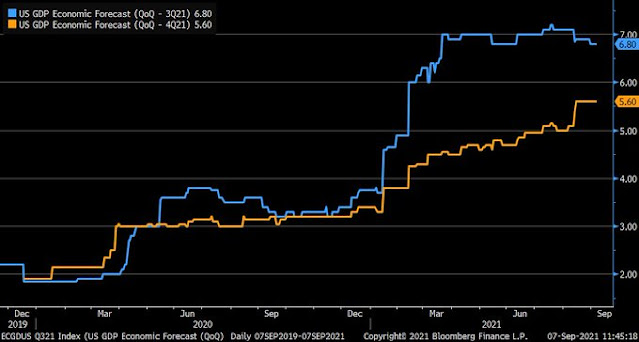 As a second opinion, New Deal democrat’s methodology of coincidental, short-leading, and long-leading indicators is a useful framework for evaluating the economy. His short-term forecast is positive for the rest of 2021, which should be positive for Q3 and Q4 earnings season.
However, he warned that “there are several sectors suggesting the economy is going to weaken substantially by mid year 2022, although no recession is forecast at this point”. Since the stock market is a forward looking indicator, economic softness in mid-2022 could translate into some sloppiness for equity prices in the coming months. 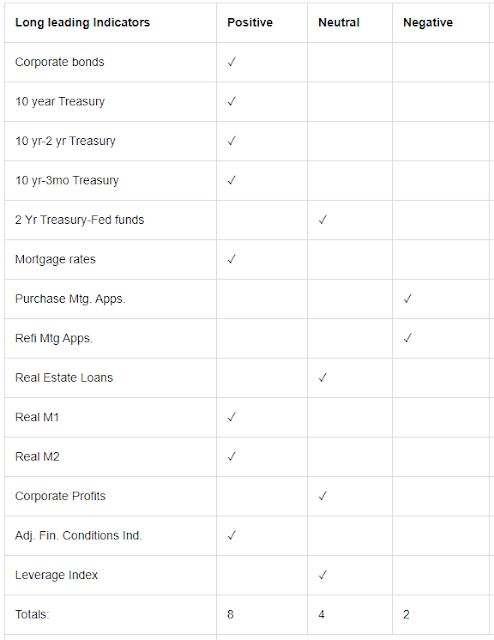 One factor that is likely to put a floor on stock prices is the supportive monetary policy of the Fed and other global central bankers. So far, the market has accepted the central banker transitory inflation narrative and taken the recent inflation spike in stride. 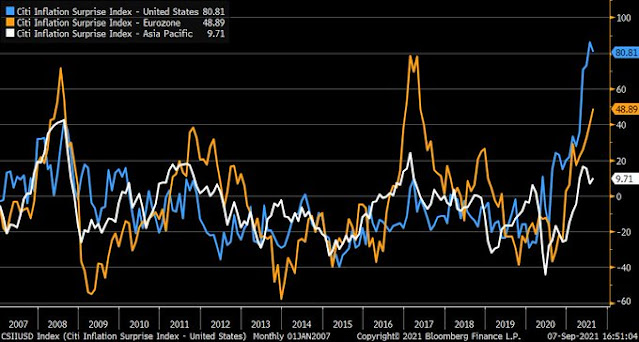 Already, the month-on-month PCE change is decelerating. This will give ammunition to the doves in the FOMC to stay with an easy monetary policy. 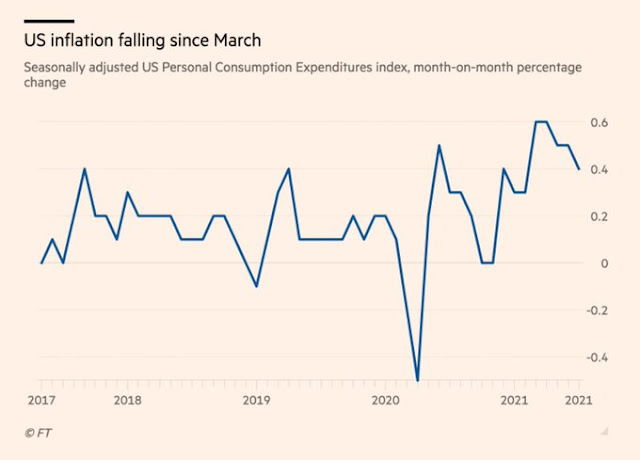 When investors think about rising inflation, the most obvious example is the 1970’s. Arguably, the current environment more resembles the late 1940’s and early 1950’s, when the Fed was more tolerant of inflation as the economy exited World War II and the resulting inflation in the wake of war related shortages.

The wildcard is government policy. Jerome Powell’s term as Fed chair is expiring. While the White House appears to favor his reappointment, progressive Democrats in Congress are pushing for a tougher bank regulator.

Investors will also have to contend with the threats and opportunity from fiscal policy. David Leonhardt of the NY Times explains that the Democrats want to enact their agenda in anticipation that they will lose control of Congress in the 2022 mid-term elections.

Early in Bill Clinton’s presidency, House Democrats voted to pass an energy tax, known as the B.T.U. tax, only to watch the Senate prevent the bill from becoming law. In the next midterm elections, more than 25 of the House Democrats who had voted for the bill lost re-election.
Early in Barack Obama’s presidency, history repeated itself. House Democrats voted for a cap-and-trade plan to address climate change, and the Senate blocked the bill. In the next midterms, many House Democrats struggled to defend their votes.
That history helps explain the approach that congressional Democrats are taking on the biggest piece of President Biden’s agenda — a $3.5 trillion plan to slow climate change, expand health care and education, cut poverty and increase taxes on the wealthy.
Many House Democrats are worried about “getting B.T.U.’d” again, as some have put it. They do not want to take a tough vote that ends up having no policy impact. “Some of us were here in 2010, when we took certain votes,” Henry Cuellar, a Texas Democrat, has said, “and the Senate didn’t take certain votes.”
In response, House Democrats are insisting that the two chambers negotiate up front over what bill they can each pass. Only after they have reached a deal will the House vote on it, Speaker Nancy Pelosi has suggested.
Those negotiations have begun, and they will proceed quickly over the next few weeks. By the end of September, the fate of the bill — and, by extension, Biden’s bid for a consequential presidency — will probably be clear.

The opportunity is an expansive fiscal policy that will boost consumer confidence and spending. The threat of the proposed corporate tax increases, which Street strategists estimate will cut 5-9% of S&P 500 earnings, all else being equal. Barron’s recently published a warning on the effects of a higher corporate tax rate (see Investors Are Ignoring the Tax Elephant in the Room). As the fears of a corporate tax increase creep into the market narrative, it has the potential to unsettle investors and spark a correction.
However, it is unclear whether a complete legislative package will ever be passed. Democratic leaders are negotiating with holdouts like Senator Joe Manchin, who holds the balance of power and has presented a long wish list that may scuttle the deal. The stakes are high. Fiscal drag is forecast to be sharply negative because of the expiry of UI benefits. 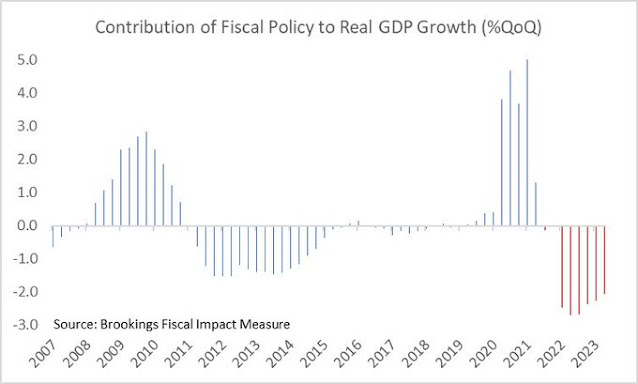 Putting it all together, how worried should investors be? Here is the big picture. Recessions are bull market killers and there is no sign of a recession in sight. Long-term investors should not panic.

However, the economy may be due for a mid-cycle pause. If history is any guide, this is the time when consumer confidence starts to stall. The wildcard is fiscal policy. Should Biden and the Democrats be successful in passing a fiscal package, it could provide a boost to consumer spending at the price of higher tax rates. 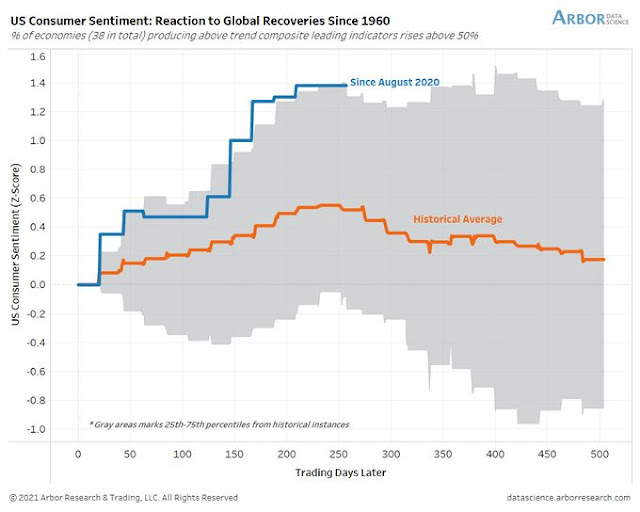 Every cycle is different, but this is also the point in the cycle when inflation expectations start to move sideways. The key difference is the determination of the fiscal and monetary authorities around the world to maintain stimulus. 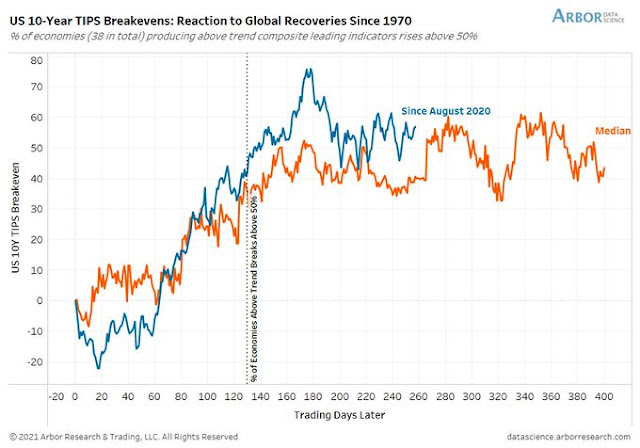 Callum Thomas at Topdown charts also studied the behavior of upside to downside equity volatility. Spikes in the upside/downside volatility ratio are the characteristic of recoveries off a recessionary bear market. It is usually resolved with either a sideways consolidation or a minor corrective phase. 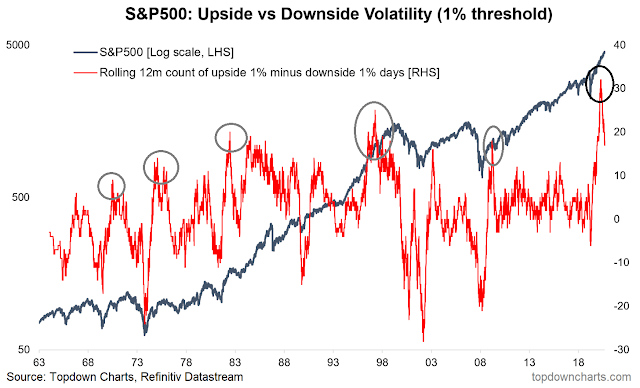 The immediate downside risk is probably limited. SentimenTrader recently observed that there is an enormous appetite for downside put protection: “A trader in S&P 500 options would have to go 40% out of the money to buy a put with the proceeds of selling a call that is only 10% out of the money. This is a sign of extreme hedging demand, the highest in several years.” 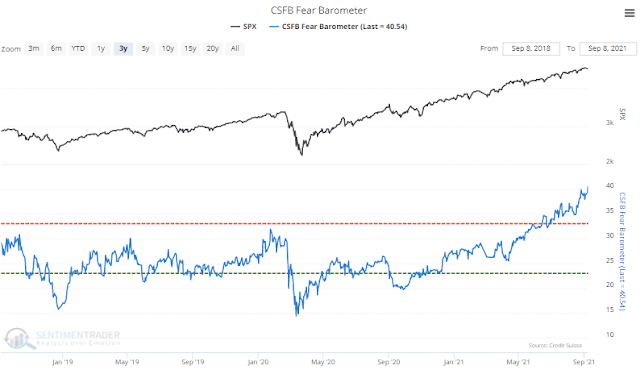 My base case scenario calls for a period of market sloppiness for the rest of 2021. After that, forecasting becomes too difficult because of too many uncertainties.

Another open question is what happens to market leadership. The recent spike in the 10-year Treasury yield argues for a rotation from growth to value. Analysis of the proposed tax increases is more negative for technology and drug stocks, which are subject to a corporate minimum tax on intellectual property held in offshore subsidiaries (see The market risk hiding in plain sight).

On the other hand, recent market action has shown that investors have piled into large-cap growth stocks as a safe haven whenever the growth outlook falters. Indeed, the NASDAQ 100 remains in a well-defined relative uptrend despite rising yields.

Market leadership depends on a number of questions that need to be answered.
In conclusion, I expect a period of choppiness and market volatility for the remainder of the year. Long-term investors should remain fully invested. Downside risk shouldn’t be more than a normal 10% correction, which represents typical equity market risk. There are many open questions about market leadership. A prudent course of action would be to hold a diversified portfolio as a way of addressing near-term uncertainties.

15 thoughts on “A time for caution, or contrarian buy signal?”