No reasons to be bearish? – Humble Student of the Markets

The nature of the market advance has been extraordinary and relentless. From a long-term perspective, the monthly MACD model flashed a buy signal last August for the broadly-based Wilshire 5000 and there are no signs of technical deterioration. This is a bull market, but sentiment has become sufficiently frothy that a reset is overdue. 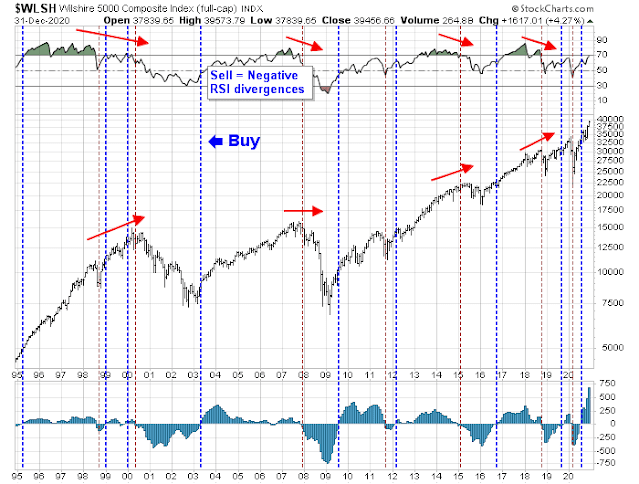 The latest BoA Global Fund Manager Survey concluded that “the only reason to be bearish…is there is no reason to be bearish”. As the economic outlook improved and the vaccine rollouts are on track to control the pandemic, the market’s mood has shifted from despondency to mania. An immense amount of speculative froth has appeared. The market has been overrun by small uninformed YOLO (You Only Live Once) investors trading penny stocks and call options.

In addition, the market has been presented with the spectacle of cash-starved auto maker Tesla spending its precious cash to buy Bitcoin. Not only that, software maker MicroStrategy $900 million in convertible notes at a 0% yield with the expressed intention of purchasing Bitcoin, after tapping the markets in December with a similar convertible.
However, stock prices don’t just fall and sentiment reset without a fundamental narrative that investors can focus on. Here are the key risks to the bullish consensus.

A key risk to the global growth narrative is a deceleration in Chinese growth. China was the first to enter the pandemic-induced slowdown in 2020 but it led the global economy out of the recession. 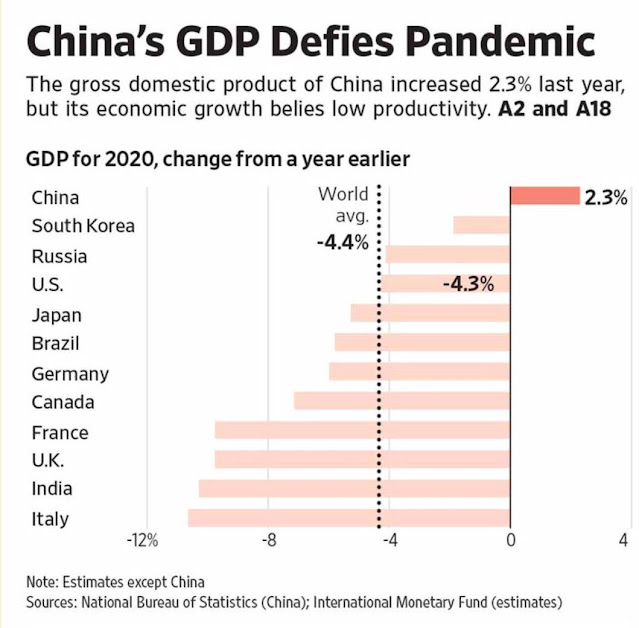 Beneath the surface, the apparent strength Chinese growth has hidden a number of vulnerabilities. A recent Bank of International Settlements (BIS) study used China’s provincial government data to aggregate GDP growth. The authors found that the sources of growth pivoted around 2010 from investment and productivity gains to government spending, credit, and house prices.

Looking at the determinants of Chinese aggregate growth, we find that the drivers have changed both with respect to economic variables and across provinces. Before 2010, growth was driven predominantly by rural population moving to cities, as well as by investments and productivity. After 2010, growth through reallocation of labor has run its course to a large extent and growth has become more dependent on government expenditures, credit growth and house prices. Moreover, these new growth determinants seem to apply more homogeneously to the majority of Chinese provinces. A natural question is whether such determinants can sustain growth persistently? 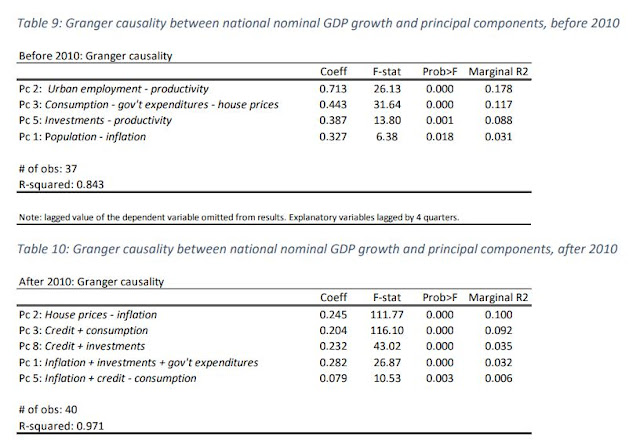 In the wake of the pandemic, Beijing went back to its old quick-fix mal-investment playbook to boost growth. Expect that 2021 GDP growth to be driven by more consumption. Under such a scenario, consumer demand should strengthen, and agricultural commodities should be strong, but industrial metal prices could soften. This has the potential to lead to a “China is slowing” scare among investors.

Keep an eye on the evolution of credit growth, as measured by Total Social Financing (TSF). TSF growth is already showing signs of slowing. While any slowdown is expected to be temporary, further deceleration could upset the global reflation and cyclical recovery consensus and spark a risk-off episode in the financial markets. 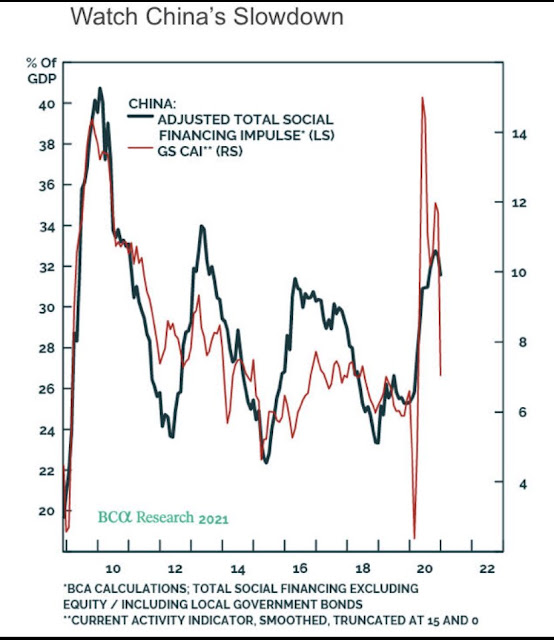 Another concern is the upward pressure on the USD, whose strength could spark a period of emerging market asset weakness.

There are several reasons for a USD rally. As bond yields have risen, the yield differential between USD assets and EUR and JPY assets has widened. All else being equal, this will attract more funds into Treasuries. Already, the USD Index has bounced off a key support zone and rallied through a falling trend line. 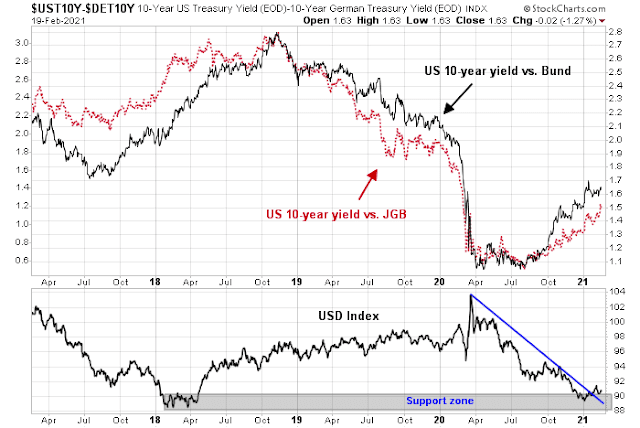 The pace of relative easing will also be on the mind of market participants. While all major G7 central banks are expected to continue to ease, the pace of asset purchase will diverge. In particular, the European Central Bank is expected to expand its balance sheet at a faster pace than the Fed, which will put downward pressure on the EURUSD exchange rate. 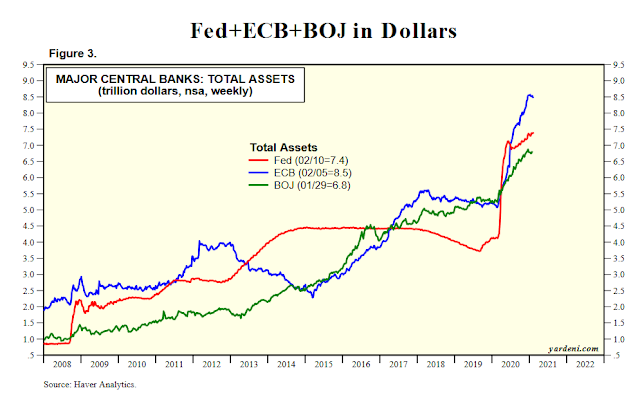 As well, there is an enormous gulf in the pace of vaccinations between the US and the EU. Several central banks, such as the Federal Reserve and the Bank of Canada, have tied the pace of vaccinations to the path of near-term monetary policy. Therefore a differential in vaccination rates will affect the relative rates of monetary easing. This will undoubtedly widen the rates of pandemic-related growth in 2021, which will show up in the FX markets. 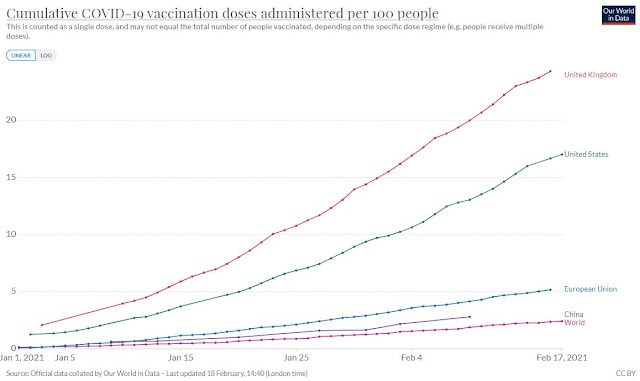 In addition, the divergence in fiscal policy between the US and the eurozone will also put downward pressure on EURUSD. The Biden administration is planning to inject some $2.8 trillion in 2021 in discretionary fiscal stimulus, consisting of the $900 billion passed in December and a proposed additional rescue package of $1.9 trillion. By contrast, the eurozone, which consensus expectations calls for a double-dip recession, only plans to inject just €420 billion, made up of funds from national fiscal authorities and Next Generation EU (NGEU) borrowing.

Finally, rising real rates could be another spark for a risk-off episode. Robin Brooks of the Institute of International Finance pointed out that the 5×5 forward swap rates indicate a sharp rise in real yields. 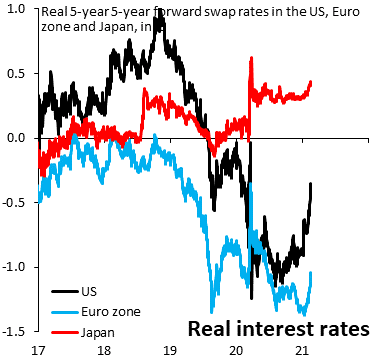 Rising real rates is associated with a stronger USD and lower gold and other commodity prices. USD strength, whether it stems from rising real yields or other reasons such as growth and yield differentials, would put downward pressure on EM assets and create headwinds for other risky assets such as equities.

In conclusion, there are several reasons to be cautious in an environment where most market participants have gone all-in on risk. Watch how these risks develop for signs that a sentiment reset is under way.

17 thoughts on “No reasons to be bearish?”