Too late to buy small caps? – Humble Student of the Markets

Mid-week market update: Instead of repeating endlessly the mantra of how frothy this market has become, I thought it would be worthwhile to take a look at one of the market leaders. Small cap stocks have led the market up during this recovery. 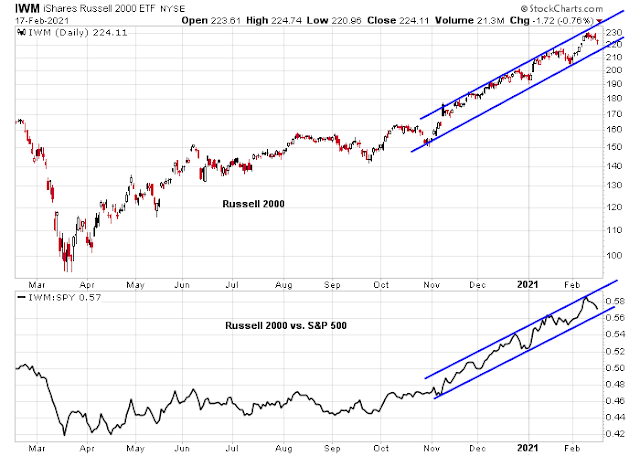 On the other hand, the latest BoA Global Fund Manager Survey shows that institutions are off-the-charts bullish on small cap stocks, which is contrarian bearish. 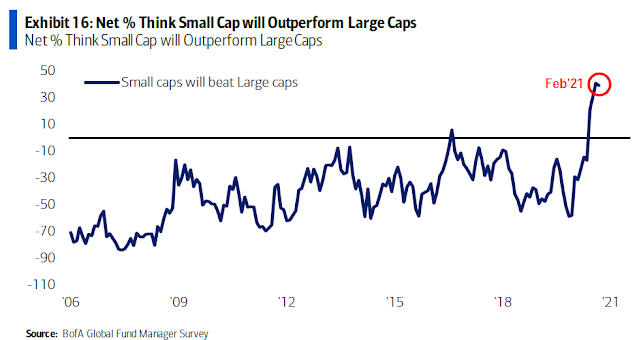 What are the risks and opportunities in small-cap stocks?

Arguably, the small-cap bull is just getting started. Callum Thomas at Topdown Charts highlighted the weight of the small-cap S&P 600 in the S&P 1500. S&P 600 weight recently made a relative bottom, but it has a long way to go before it even normalizes. 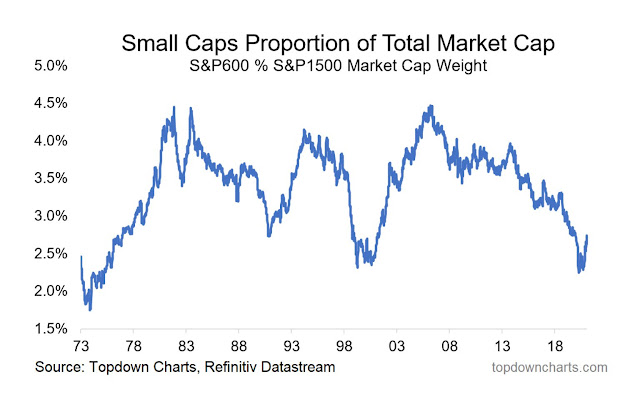 From a valuation perspective, the relative P/E ratio of the small-cap Russell 2000 to the large-cap Russell 1000 also made a recent cyclical low. The party’s just getting started. 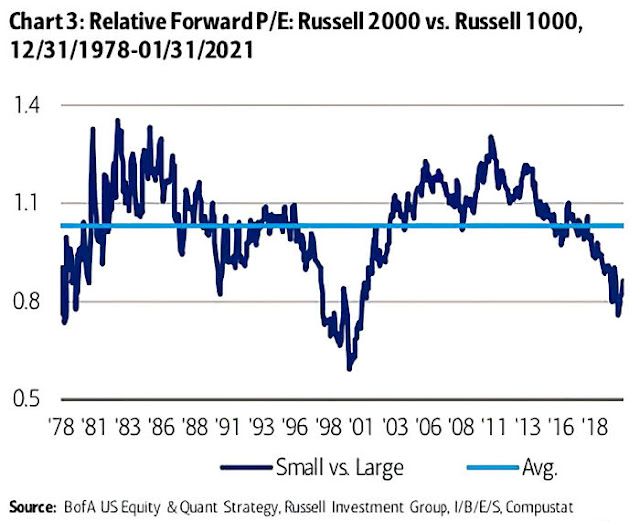 How frothy is this market?

While the long-term outlook for small caps is bright, the elevated sentiment levels begs the question of whether traders should be concerned about the frothiness in the market. Even though small stocks are the market leaders, high beta small caps are not likely to perform well should the market correct.

On one hand, bullish sentiment can be interpreted in a bullish way. Arbor Data Science pointed out that the spread between bull and bear searches is extraordinarily high. The last time the readings reached these elevated levels, the market continued to advance. These surges in bullish sentiment is not unusual during the initial phases of a new bull. 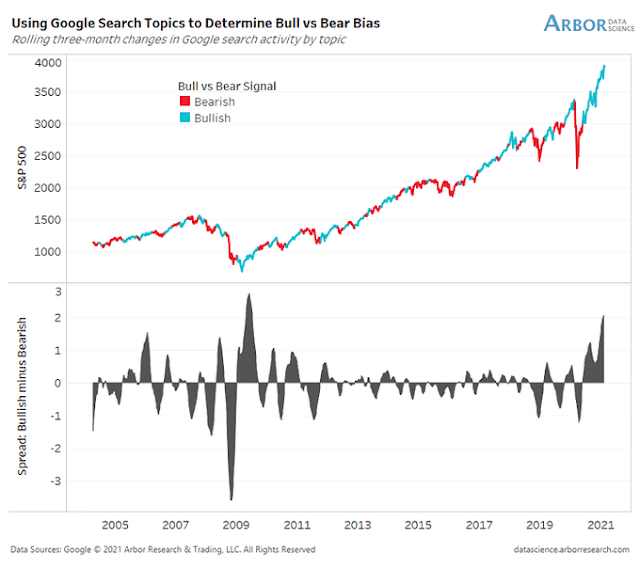 On the other hand, Willie Delwiche observed that the percentage of industry groups making 52-week highs were mostly concentrated in mid and small-cap indices. Though the sample size is small, similar high readings of industry highs have foreshadowed market pullbacks (n=3). 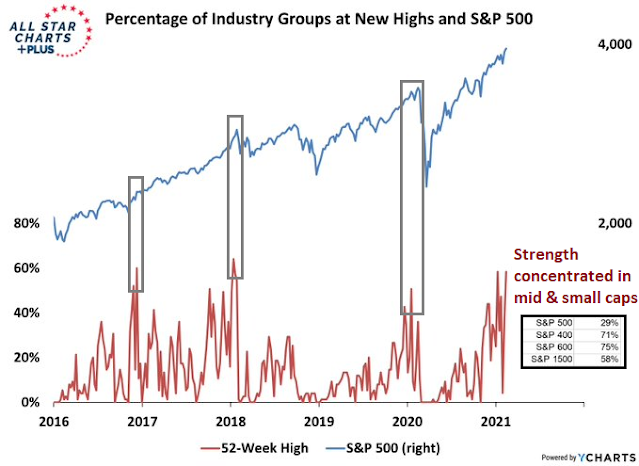 In addition, Goldman’s Risk Appetite Indicator recently reached a +1 standard deviation sell signal, which is the first time in three years. This is an intermediate-term warning for stock prices. 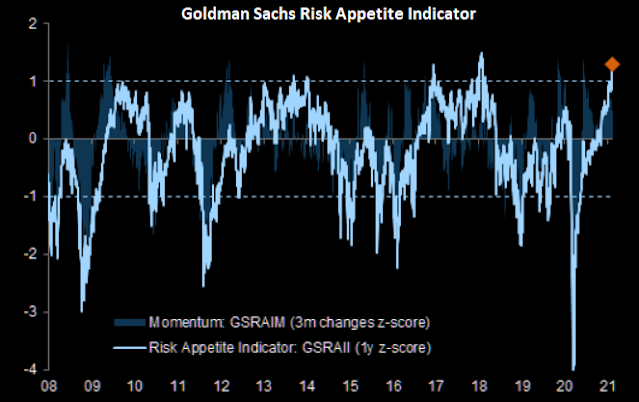 Due for a sentiment reset

Sentiment readings indicate that this market is eventually due for a reset. I am like the boy who cried wolf so many times that I am not sure if I believe the warnings myself anymore. First, the market reaction to this morning’s PPI and retail sales extremely strong prints were revealing. The immediate reaction was a retreat in both equity prices and bond yields. This calls into question of what was already priced in.

In addition, a technical cautionary signal comes from the rising correlation of the S&P 500 and the VIX Index, and the VVIX, which is the volatility of the VIX. In the past, spikes in correlation have resolved with 3-5% pullbacks. 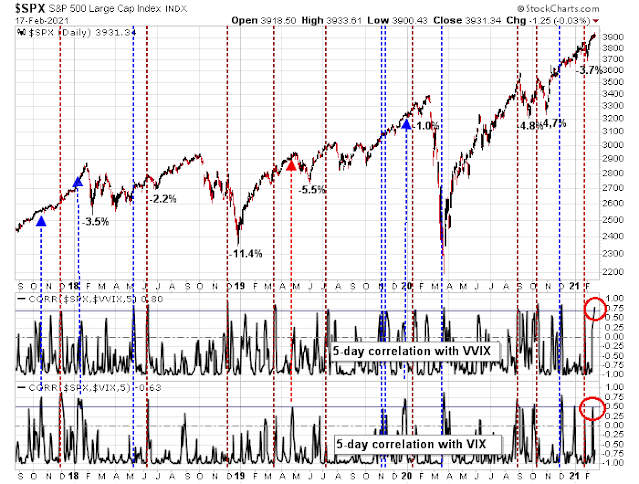 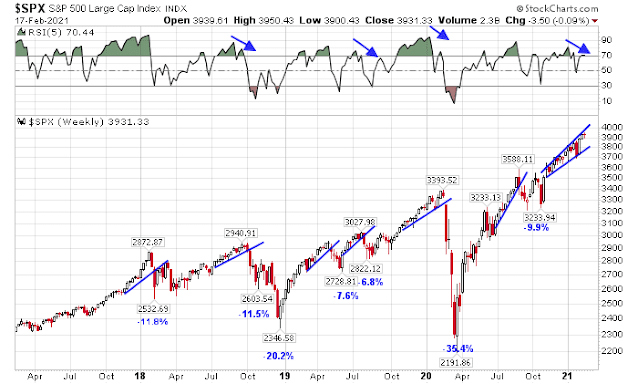 From a longer-term perspective, this chart of small to large-cap ratios makes it clear that we are just starting a relative bull cycle for small-cap stocks. The relative performance of microcaps (IWC), the Russell 2000, and the S&P 600, which has a higher earnings quality because S&P has a stricter inclusion criteria than the Russell indices, also show that the market experienced a quality effect for the past few years. Low-quality small caps began to lag as early as 2015, but they have snapped back in a convincing fashion in the past year. As well, the Russell 2000 to S&P 500 14-week RSI has become overbought, and that has been a signal in the past for a tactical reversal in relative performance. 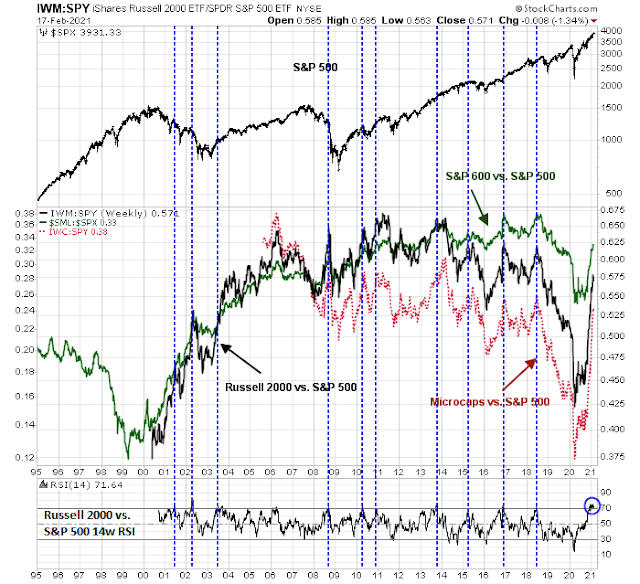 I remain long-term bullish on small-cap stocks. Your level of commitment will depend on your time horizon. If the market were to go risk-off, small caps are likely to underperform in the short-run.

37 thoughts on “Too late to buy small caps?”