Mid-week market update: To paraphrase Emperor Hirohito when he broadcast the Japan’s decision to surrender in World War II to the nation, “My inner trader’s returns have not necessarily developed to his advantage in 2020”. While the trading system was correct in spotting the major downdraft this year and the initial recovery, it was wrong to stay short as the market rallied. 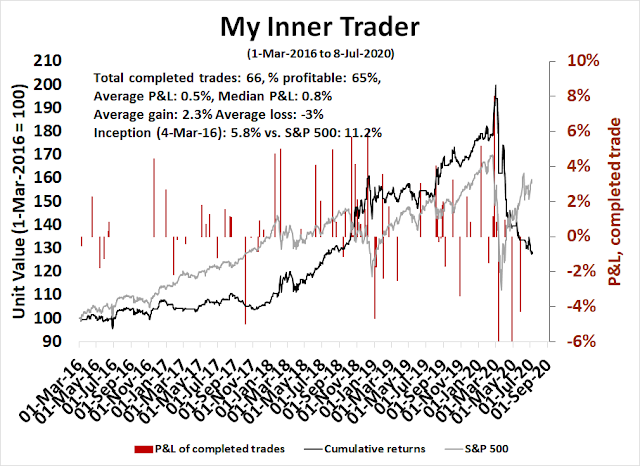 With that in mind, he has gone back to the drawing board and analyzed the three key elements of the current market.

Here is how conventional analysis has played out. I don’t want to sound like a broken record, so I’ll just summarize my views. It’s difficult to believe that the stock market could just stage a brief sharp pullback and recover so quickly in the face of the second worse recession of the last 100 years. By many measures, the magnitude of the Covid Crash on the economy has only been exceeded by the Great Depression. 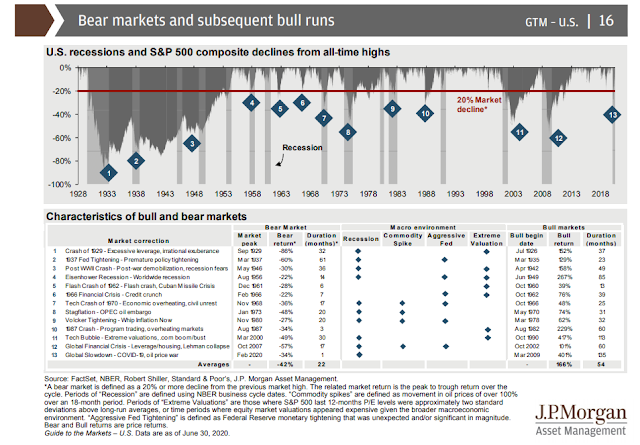 I have voiced my concern about equity valuation for some time. While stock prices are less predictable in the short run, the long-term equity outlook appears dismal owing to the stratospheric forward P/E ratio. Even if investors were to look ahead to 2021, the FY2 P/E ratio is about 19, and could be in the 20-21 range if Biden were to win in November and enacts his tax proposals (see Fun with technical analysis on the 4th of July). 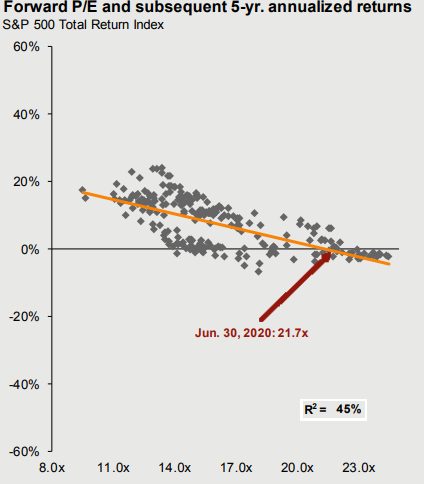 In the short run, the trajectory of the recovery is also stalling. High frequency economy numbers are pointing to a plateau and retreat of the recent economic recovery (see Why there is no V).

Market sentiment looks stretched. One example often cited is the extreme low in the equity-only put/call ratio (CPCE). Equity options are mainly used by individual stock traders to take positions (dumb money), while index options are mainly used by professionals to hedge their positions (smart money). The spread between CPCE and the index put/call ratio (CPCI) is another warning sign for equity prices. Past episodes of similar extreme readings have seen stock prices either stall or correct. 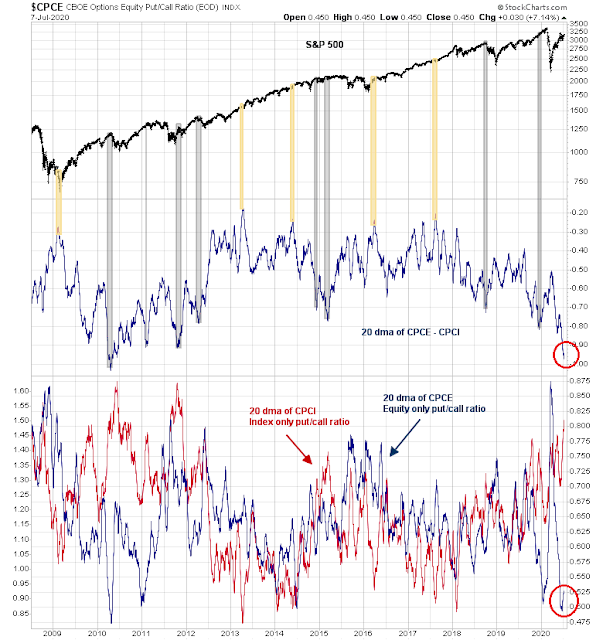 Implied volatility is elevated despite the recent stock market rally. Goldman Sachs documented a disturbing divergence between the VIX Index and past returns. The high level of the VIX either makes the market vulnerable to a pullback, or a volatility spike. To be sure, rising volatility can be bullish. Stock prices can either crash or surge higher. Keep in mind, though, that stocks are historically inversely correlated with the VIX, and rising VIX usually means lower stock prices. 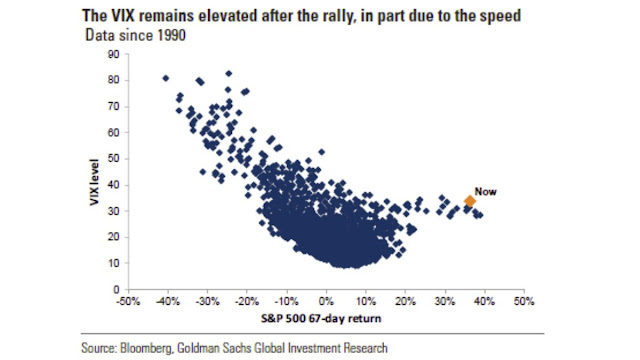 The bullish view is anchored by the belief that central bank liquidity is propelling stock prices upward. Famed hedge fund manager Stan Druckenmiller recently said that he was humbled by the market. He turned bullish and explained that he had underestimated the impact of the Fed’s flood of liquidity on the market. What is less known is how Druckenmiller learned his trading process from his first mentor, Speros Drelles.

I recently wrote about the “wisdom of the crowds” in Fun with technical analysis on the 4th of July. There is a second level to that story about the independence of views in the crowd, and herding.

Drelles taught Druckenmiller that traders should be trend followers when there’s a lot of disbelief about the trend, and contrarian when the trend becomes the consensus view. That’s where the art and the science of trading comes in. Mechanical trading systems only gets you so far.

Are we near such an inflection point in sentiment? Strategist Ed Yardeni recently threw in the towel on valuation as a metric:

From February to the end of June, total assets held by the three major central banks (ECB, Fed, BOJ) soared $5.6 trillion to a record $20.1 trillion — with the Fed now holding over $7 trillion, data from Yardeni Research show. …. The big picture: Value metrics like P/E ratios must be re-evaluated in light of the current situation, Ed Yardeni, president and chief investment strategist of Yardeni Research, writes in a note to clients. “What should the forward P/E of the S&P 500 be when the federal funds rate is zero, the 10-year US Treasury bond yield is below 1.00%, and the Fed is providing plenty of liquidity to facilitate the resulting rebalancing from bonds to stocks?”

This quote is from our Morning Briefing today, which concluded: “Notice that we didn’t ask what the ‘fair value’ of the forward P/E is, which would imply that the market operates freely enough—unaffected by Fed interventions—to determine that value. Clearly, that’s no longer the case. Frankly, we don’t know the answer to this question, since there is no precedent for the current situation. However, we do know that prior to the GVC, we all thought that the S&P 500’s fair-value P/E was around 15.0. Could it be double that now? Maybe.”

You tell me. If this is a late 1990’s style market bubble, then Mark Hulbert believes that sentiment is far from irrationally exuberant. In a WSJ opinion piece, Hulbert came to that conclusion by citing the work of Malcolm Baker, of Harvard Business School, and Jeffrey Wurgler, of New York University. The academics analyzed these factors for signs of irrational exuberance.

Based on these metrics, Hulbert concluded that today’s market mood is nowhere near the giddiness of the dot-com era. If this is the start of a bubble, then the bull has a long way to run.

On the other hand, Bloomberg reported that long/short hedge funds are closing their doors because the short side isn’t generating alpha, and it’s creating an existential crisis for hedge fund managers.

The closures reinforce the bruising reality that such funds have captured most of the market’s downside in recent years, but very little of the upside. They also beg the question: If the arrival of a deadly pandemic that’s pummeled the world’s economies can’t work in short-sellers’ favor, then what can?

“The existential crisis is real,” said Andrew Beer, founder of New York-based Dynamic Beta investments. “This is not a new phenomenon, but has gotten worse over time. When markets go down, hedge fund stocks go down more.”

This sounds like capitulation by the short-selling crowd that marks the end of an advance.

These contrasting views begs the question of whether an investor should adhere to the traditional conventional style of analysis and exercise caution, or jump into equities with both feet because of the global central bank put is creating a market bubble.

The results were remarkable. Most of the gains from the stock market’s rally since the March bottom came in the overnight session (black line), while the daylight sessions (blue line) were mostly flat. In addition, the market has gone through several periods where the overnight to day ratio (grey line) had trended up, which I characterize as jittery markets driven by unpredictable news. Past breaks in this ratio saw a marked change in market behavior. The market changed from either a falling or sideways market to one that trended upwards. In the most current instance, the market is trending up, and I would expect a ratio trend break to signal a change to either a corrective or a sideways and choppy consolidation.

Equally remarkable are the characteristics of the market since the March bottom. The percentage of days that the market was positive was identical at 55.9%, but the average and median returns of the overnight sessions beat the daylight sessions. 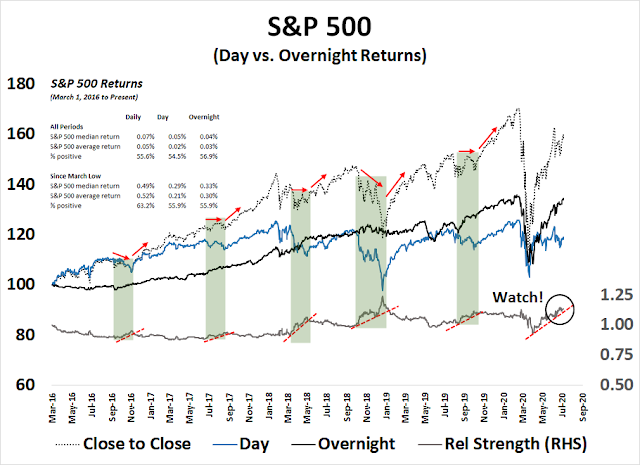 I conclude that my inner trader needs to focus on regime change dynamics by watching for a break in the uptrend in the overnight to daylight ratio.

When I focus on trading performance, the recent uptrend in the overnight to day ratio coincided with the return drawdown. The trading systems was affected mainly by overnight news to which the system was unable to react. While this is not meant to be an excuse, or one of those backtests that work well in the lab but not necessarily in real life, this chart illustrates what would have happened had the same trading signals been only applied to the daylight hours, and the trading system went flat to cash overnight. This is meant purely as a proof of concept of my regime change analysis. The trading system would have been choppy but flat during this period, compared to the skid had it held the mainly short positions in both daylight and overnight sessions. 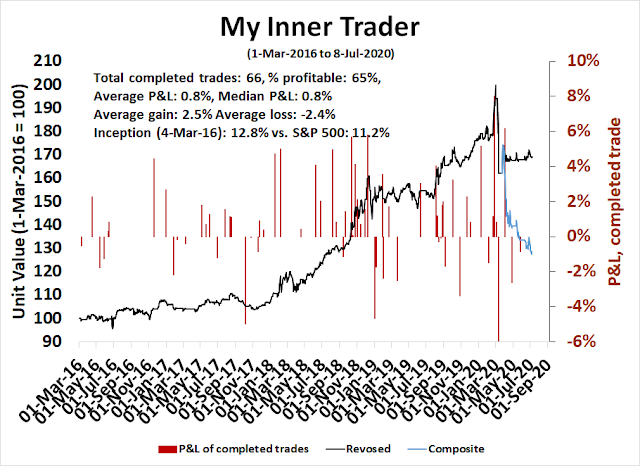 So what are the takeaways and action items in light of this analysis?

First, the market has undergone a regime change since the March bottom as it has become extremely headline sensitive. After-hour news events have moved the markets overnight, and the overnight e-mini futures are thin, and may be problematical to trade for some participants. Good investors and traders don’t get better without acquiring scars. This latest drawdown is the scar tissue that helps me improve my investment and trading process.

This regime shift creates a dilemma for my inner trader on how to trade this market. It’s one thing to attribute lack of performance to a regime shift, it’s another to create a rule, or a set of rules, on how to react to the change, and when to change back.

The other course of action is to continue trading, but only follow the trading signals during daylight hours. This means closing out the position at the close, re-entering the position at the open, and staying in cash in the overnight session. This approach involves high trading costs. The biggest component of trading cost is the uncertain execution slippage, defined as the difference between actual price executed and the reported opening and closing prices, as well as commission costs. For measurement purposes, I will begin to report my inner trader’s trading starting tomorrow (July 9, 2020) until it is evident that the market regime has returned to normal.

Tactically, I am inclined to maintain my short trading position (during daylight hours) and put a stop loss order just above the top of the island, as per the primer outlined in An island reversal update.

68 thoughts on “My inner trader returns to the drawing board”