Why there is no V – Humble Student of the Markets

The market has been getting excited by the prospect of a V-shaped recovery. It points to data such as the ISM Manufacturing PMI, which rose from 43.1 in May to 52.6 in June, indicating expansion. The employment index improved from 32.1 to 42.1, and the new orders index increased from 31.8 to 56.4.. 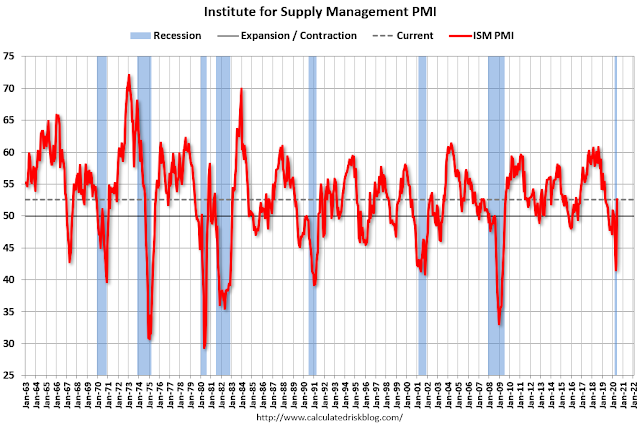 While those are positive developments, this is not indicative of a V-shaped rebound. PMIs are designed to measure month-to-month changes. The economy is still in a big hole it’s trying to dig out of, and there are signs the recovery is stalling.

Let’s begin by analyzing the June Employment Report. The economy added 4.8 million jobs, which was well ahead of expectations. In addition, the diffusion index spiked, indicating a broad rebound. That’s good news. 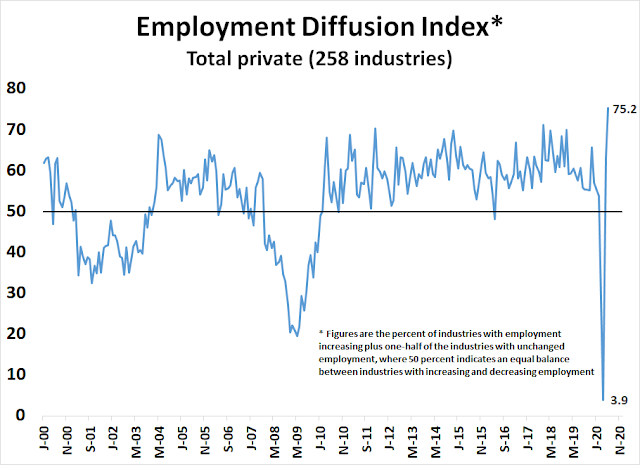 The picture looks far less rosy beneath the surface. Here are the good, the bad, and the ugly parts of the report. 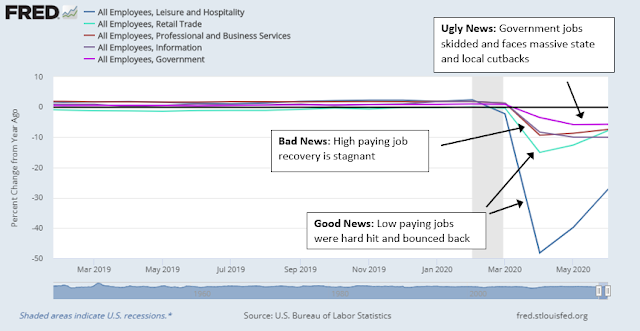 The story is the same within the blue and pink collar job sector. Low paying retail jobs have bounced back nicely. The rebound in high paying manufacturing jobs has been less strong, and transportation and warehousing job growth is stagnant. 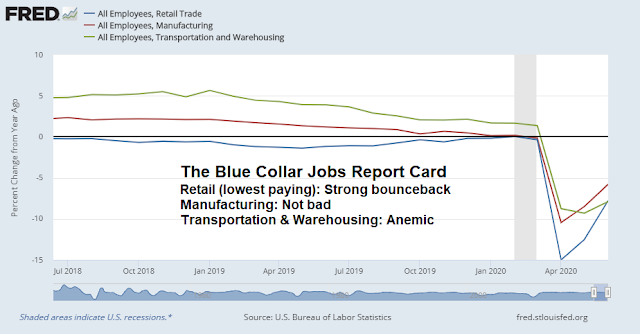 So far, the jobs recovery can be seen in the reversal of temporary furloughs. The unfortunate news is the number of permanent jobs lost. 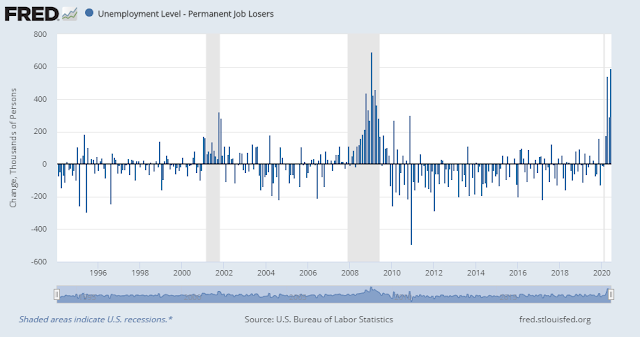 The V-shaped recovery can only be found in low-wage positions. The rest of the jobs market faces a far cloudier outlook.

The consumer pulls back

The June Employment Report is a snapshot of the economy in mid-June. High frequency data since then has shown a stalling in consumer activity. Morning Consult reported that consumer confidence is starting to roll over. The weakness began just after mid-June, which was just after the data date of the Employment Report.

The ECRI Weekly Leading Index has flattened out in the last two weeks. 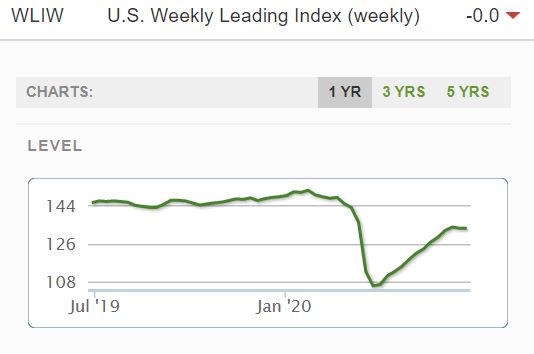 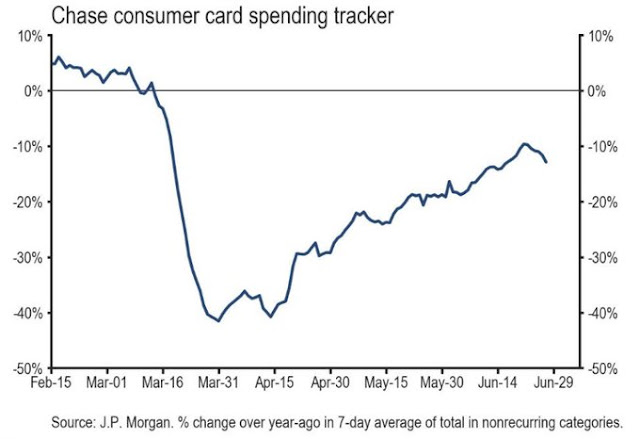 The slowdown is probably related to a rise in COVID-19 cases in the US south and southwest. Mobility is slowing in the states showing high case growth rates. 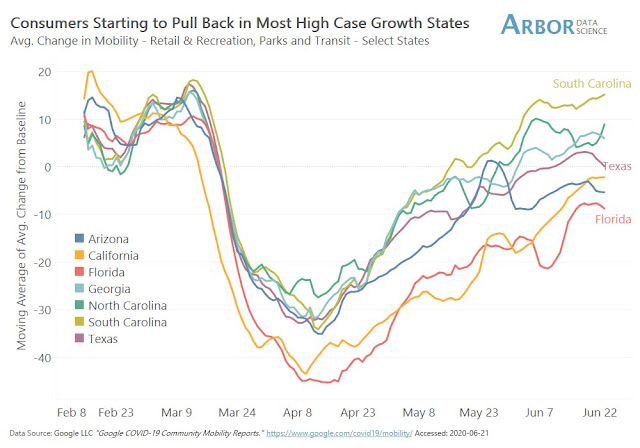 The surge in case counts in a number of states is well-known. 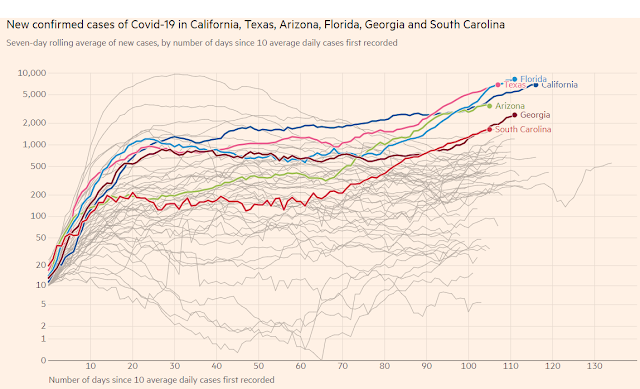 Deaths have not risen so far, which is attributable to a number of reasons. First, young people are being infected, and they tend not to be as vulnerable as the older population, which was the group that was the most affected initially. There is also a lag in the data. The sequence of reports is case count, followed by hospitalization, and deaths. The lag between case count and death is roughly four weeks. Hospitalizations exacerbate the fatality rate, because hospitalization is a signal that a case is serious, and at risk of death or serious complications. However, there is no national database of hospitalizations, and some states, like Florida, do not report hospitalization. Nevertheless, hospitalization rates are rising, with Texas and Arizona being the most seriously affected states.

The death rate has not risen for now. If the lagged sequence of case count, hospitalization, and death were to hold, the daily fatality rate in the key states is expected to rise to 1,000 per day or more by late July.

Regardless of what happens with the virus, the high frequency data shows that the consumer is already reacting with greater caution. State and local authorities are also reacting to the rising infection rates with new edicts. Texas is the first state to re-impose a lockdown after reopening its economy. The mayor of Jacksonville, Florida, began requiring face masks to be worn in public last week, and the measure could jeopardize the Republican National Convention, which is scheduled for August 24-27 in that city.

Forget about the V. Business Insider reported that Christophe Barraud, who was ranked by Bloomberg as the most accurate forecaster of US economic data eight years in a row, said the US won’t return to its fourth quarter 2019 real GDP level until at least 2022. For some European countries, a recovery won’t happen until 2023.

Looking ahead, the trajectory of stock prices will depend mainly on investor reaction to the Q2 earnings season, and the official policy response.

As we enter the Q2 earnings season, companies will undoubtedly discuss their near-term outlook. The latest update from FactSet shows that the Street is lower near-term 2020 estimates, while raising longer term 2021 estimates. Much will depend on the companies’ body language this earnings season, though an extraordinary number of withdrawn guidance owing to high levels of uncertainty.

The Transcript, which monitors earnings calls, gives us an early glimpse of the tone of Q2 earnings reports. The latest update shows reports of a rebounding economy combined with nervousness from executives about rising virus cases in some states and countries. 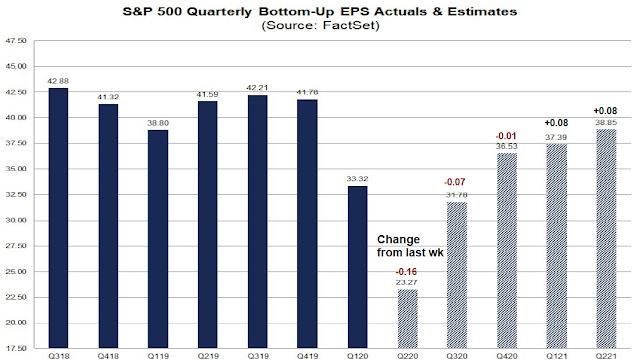 Policy response has several elements: fiscal policy, monetary policy, and health care policy. The economy has been supported by what amounts to “battlefield surgery” fiscal support, which runs out at the end of July. It is clear the economy needs further support beyond July, but it is unclear whether the Republicans and Democrats can agree on a second rescue package so close to an election. 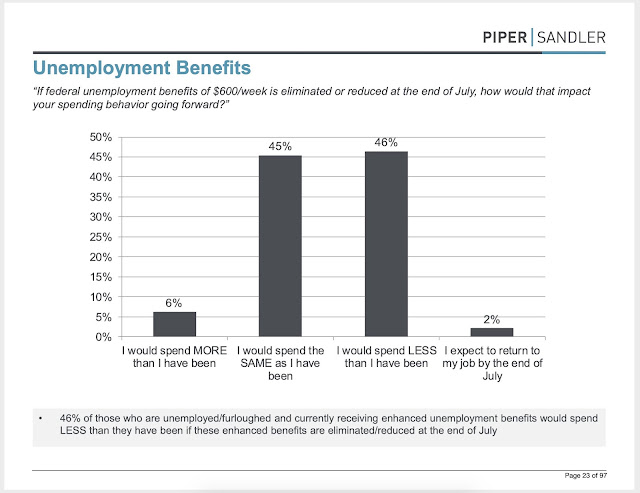 The June FOMC minutes gave the market some direction on the path of monetary policy. The Fed is clearly concerned about the pandemic response, and it stands ready to act.

Participants all agreed that the effects of the pandemic would weigh on economic activity in the near term and that the duration of this period of weakness was uncertain. They further concurred that the unpredictable effects of the coronavirus outbreak were a source of major downside risks to the economic outlook…Participants stressed that measures taken in the areas of health care policy and fiscal policy, together with actions by the private sector, would be important in shaping the timing and speed of the U.S. economy’s return to normal conditions. Participants agreed that the Federal Reserve’s efforts to relieve stress in financial markets would help limit downside near-term outcomes by supporting credit flows to households and businesses, and that a more accommodative monetary policy stance would provide support to economic activity beyond the near term.

The effectiveness of the Fed’s response is in the eyes of the beholder. The Fed’s balance sheet shrank for a third week in a row. The reduction in the first two weeks was mainly attributable to the unwind of USD swap lines with foreign central banks, and the latest decline can be traced to a reduction of bank repos that injected liquidity into the banking system. The repo unwind should continue for a few more weeks. The Fed is continuing its purchase of Treasuries and other fixed income instruments during this time. 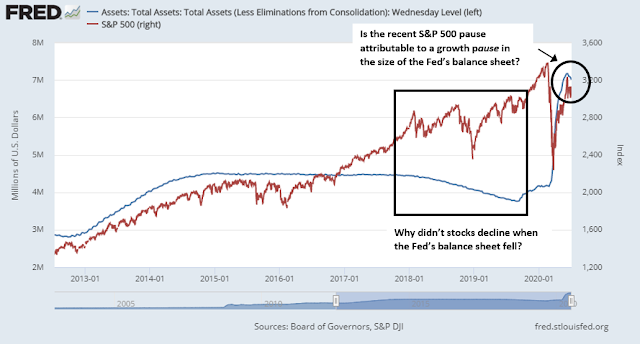 As for health care policy, NBC News reported that the White House is pivoting to a “learn to live with it” message in battling the virus:

At the crux of the message, officials said, is a recognition by the White House that the virus is not going away any time soon — and will be around through the November election.

As a result, President Donald Trump’s top advisers plan to argue, the country must figure out how to press forward despite it. Therapeutic drugs will be showcased as a key component for doing that and the White House will increasingly emphasize the relatively low risk most Americans have of dying from the virus, officials said.

However, there is some hope on the therapeutics front.

Next week administration officials plan to promote a new study they say shows promising results on therapeutics, the officials said. They wouldn’t describe the study in any further detail because, they said, its disclosure would be “market-moving.”

Stay tuned for the new “market moving” announcement. Will it be any more than a one-day wonder, or will it have a sustained effect on the outlook?

Trading note: The market has been strong today owing to a melt-up in the Chinese markets. I am conducting a more detailed analysis of the trading framework, which I will publish in the next one or two days.