Francis Galton observed a competition at a local fair in 1906 where about 800 people tried to guess the weight of an ox. To Galton’s surprise, the average of all the guesses was 1,197 lbs. The actual weight came in at 1,198 lbs. Other studies have confirmed that a diverse crowd is better at estimates than any single expert.

This adage, “the wisdom of the crowds” is really another formulation of the Efficient Market Hypothesis, in which it is difficult for any single analyst to gain a consistent edge. Technical analysis is one way of listening to the markets, and applying its message to understand what the market is discounting.

With that preface in mind, consider this mystery chart. Would you buy, hold, or sell this security? 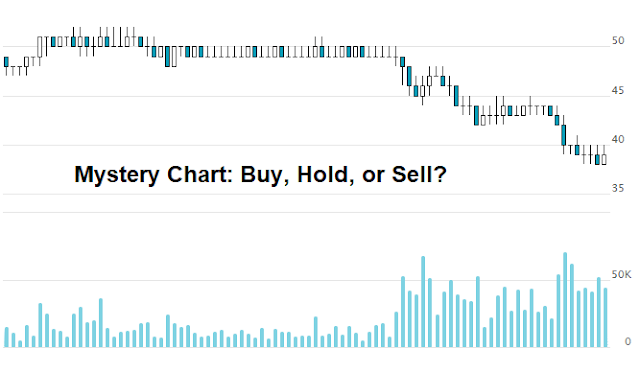 The mystery chart is the price chart of the Trump contract on PredictIt, which pays off at $1 if Trump were to win the election in November. The contract exhibited several support violations on high volume, which are worrisome signs for Trump bulls. As always, this analysis is not intended to be an endorsement of any candidate or political party, only to estimate the market effects of an electoral outcome.

For completeness, here is the Biden contract, which has staged multiple upside breakouts on strong volume, indicating conviction. That’s why my base case scenario increasingly tilts towards a Biden victory in November, which has important implications for equity investors. 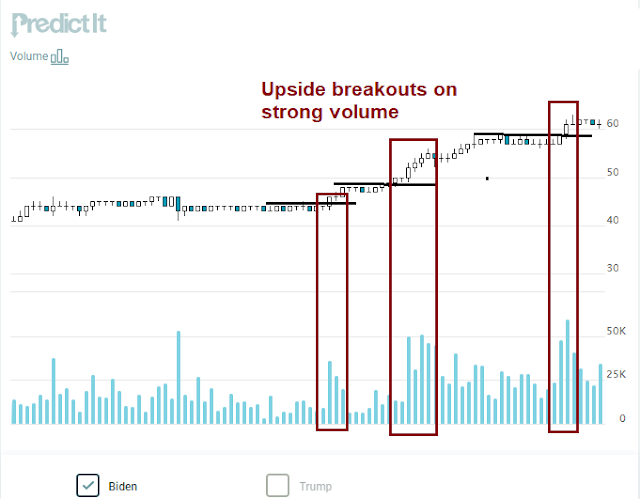 I conclude that the market has not fully discounted the prospect of a Biden win just yet. If and when it does, it may act to de-rate equities based on the prospect of a lower 2021 earnings outlook. A Biden victory will mean a 6-12% fall in 2021 earnings, which translates to a 6-12% decline in stock prices if P/E multiples stay the same. Should the market see P/E compression from the current lofty levels, downside risk could be considerably higher.

A referendum on Trump

A recent Pew Research poll is highly revealing about the internals of the race. Instead of the usual “horse race” asking respondents who they would vote for, the poll probed voter attitudes about each candidate. What is clear is that the race is becoming a referendum on Trump. Prospective Trump voters are mainly voting for Trump, while prospective Biden voters are voting against Trump, and not for Biden. 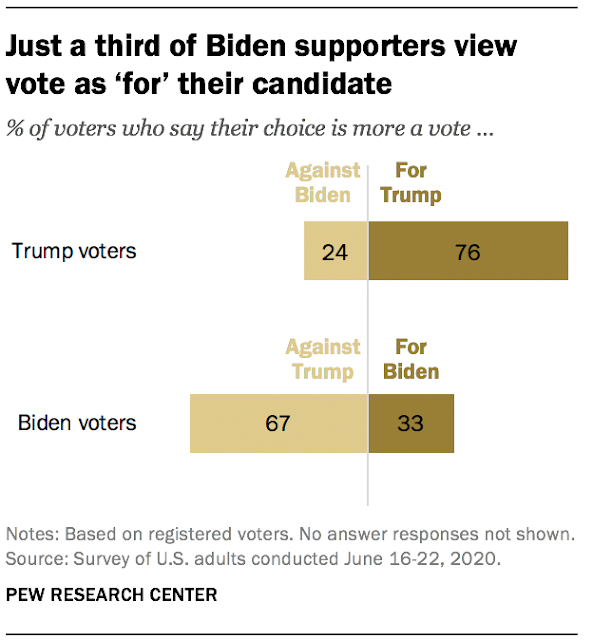 Even though the election is four months away, and four months is a long time in politics, Trump’s electoral problems seem intractable compared to 2016. Here is how Trump won in the last election. Even though he lost the popular vote to Hillary Clinton, he won enough of a plurality in a handful of swing states to eke out a path to the White House.

The 2016 election was highly unusual inasmuch as both major candidates had high negative ratings. Voters viewed both Trump and Clinton more negatively than positively. Trump waged a masterful campaign to drive up Clinton’s negatives, and to encourage defections to third-party candidates. As the consensus was a Clinton win, there were sufficient voters who dislike her sufficiently to cast protest votes for the likes of Green Party candidate Jill Stein that Trump was able to gain a plurality in key battleground states.

Fast forward to 2020. The polling data shows that Biden voters are voting against Trump, instead of for Biden. Trump is entering this election with high negative support, while Biden’s ratings are slightly positive. Here are the ways that Trump can find a path to victory.

Another headwind is the Never Trump contingent within the Republican Party have become far more vocal in its opposition. Reuters reported that former George W. Bush officials have formed a Political Action Committee to raise funds to elect Biden, though the former president is not involved in the campaign.

The officials, who include Cabinet secretaries and other senior people in the Bush administration, have formed a political action committee – 43 Alumni for Biden – to support the former vice president in his Nov. 3 race, three organizers of the group told Reuters. Bush was the country’s 43rd president.

As well, a group of Republicans at the Lincoln Project have been running anti-Trump ads in key battleground states. If you haven’t seen them, check out their YouTube lineup of ads to see how they are driving up Trump’s negatives.

To be sure, the Trump campaign still has a funding advantage. Despite the news that the Biden and Democrats had better fundraising success than Trump and the Republicans for both the months of May and June, the Trump-RNC fund reported $295 million in its account at Q2. The Biden-DNC campaign did not report its cash for June yet, but it had about $122 million at the end of May.

While nothing is impossible, those are indeed formidable challenges for the Trump campaign. The Pew Research poll asked respondents what soured voters on Trump. The disapproval ratings on Trump rose for people who are younger, have lower income, and more likely to live in areas most affected by COVID-19. He has to improve his performance in those areas, especially among the key low-income demographic and in the COVID-19 regions. 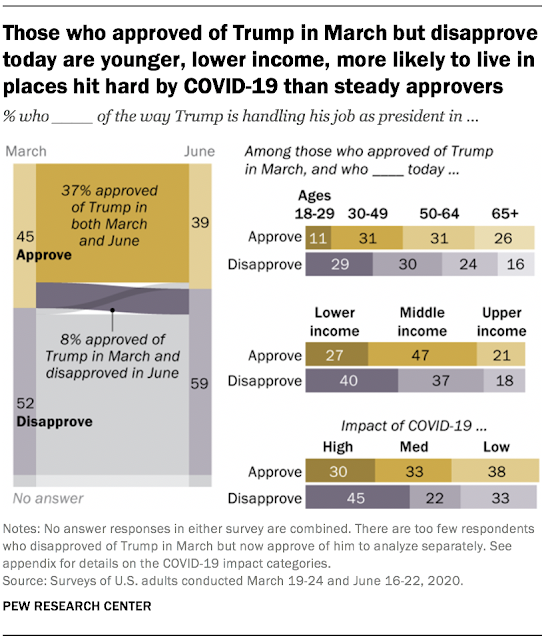 As well, Trump’s falling poll numbers are likely to affect the Republicans down ballot too. The consensus is the Democrats will retain control of the House, but the real battle will be the Senate. Biden needs to control both chambers of Congress to push through his programs should he win in November. The Pew Research poll shows that approval among Republican supporters is tanking, which is an ominous sign for GOP Senators in November. 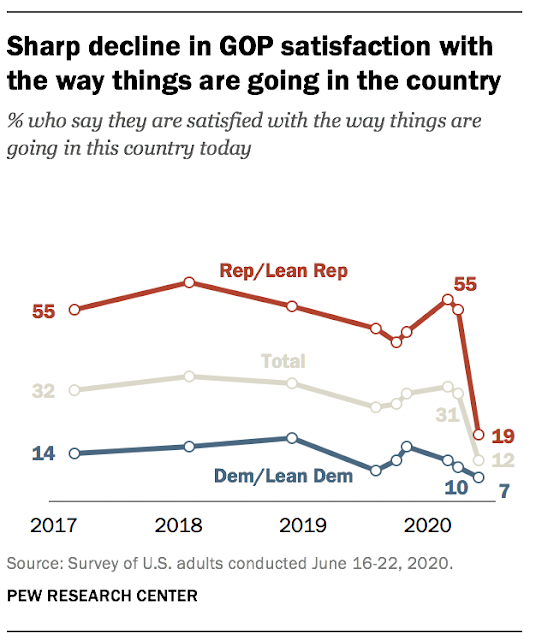 The PredictIt odds for Senate control has been steadily rising for the Democrats. While the price action is not as definitive as the Biden contract, this contract did stage an upside breakout on strong volume. 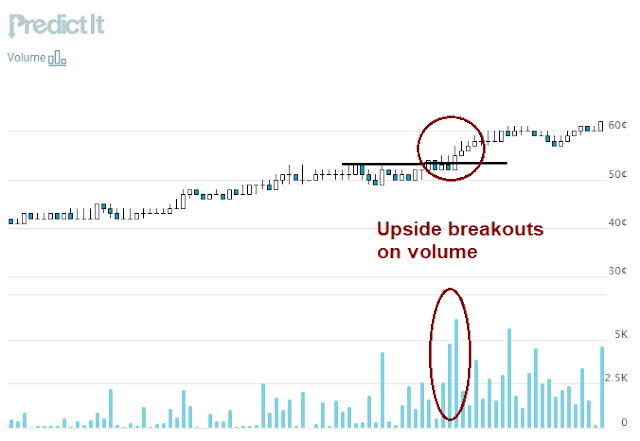 These results call for a base case scenario of a Biden win, accompanied by a Blue Wave where the Democrats take both the House and Senate in November. 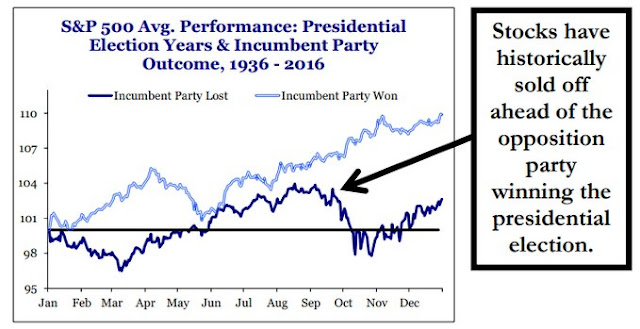 I reiterate my conclusions in my past publication (see What would a Biden Presidency look like?).

A Biden victory is expected to be a net mild negative for equity prices. Much depends on the degree of control by the Democrats should Biden win the White House. The chance of a Blue Wave sweep is possible, and it would embolden the progressives within the Democratic Party to steer policy further to the left with bearish consequences for the suppliers of capital.

The most immediate effect of a Biden win would see higher taxes. Expect a higher corporate tax rate, and the imposition of a minimum corporate tax. As well, the top rate is expected to rise, and so will the capital gains and dividend tax rates. High income earners will also face higher social security taxes.

The market will focus mainly on those immediate negative factors. Consensus bottom-up 2021 earnings currently stand at $163.39. Unwinding the 2017 tax cuts would reduce about $10 off 2021 earnings, and second-order effects of potential Biden proposals, such as the corporate minimum tax, changes to the global intangibles tax, and so on, could reduce 2021 earnings by another $10. This translates to a 2021 P/E ratio of 20.5 to 22.0, which are stratospheric for FY2 P/E multiples. 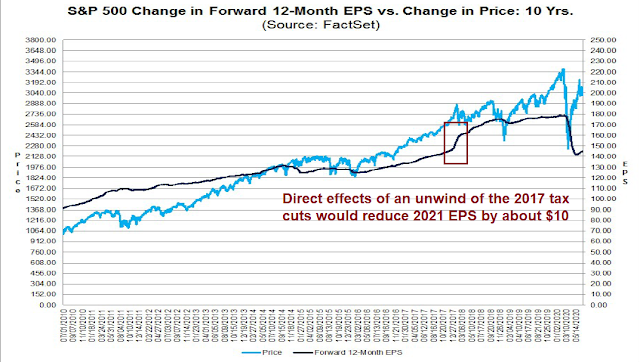 From a practical perspective, the immediate effect of a Biden victory will mean a 6-12% fall in 2021 earnings, which translates to a 6-12% decline in stock prices if P/E multiples stay the same. Should the market see P/E compression from the current lofty levels, downside risk could be considerably higher.

To be sure, there will be long-term positive effects of the Democrats’ re-distribution policies. We have the results of a real-time experiment of fiscal support and re-distribution policies. When the CARES Act gave households a flat dollar amount, the spending recovery rose faster for low-income households than high-income households. That’s because lower-income workers have a higher propensity to spend extra income, while higher income workers have a lower propensity to spend and a higher propensity to save and invest the government’s fiscal support. 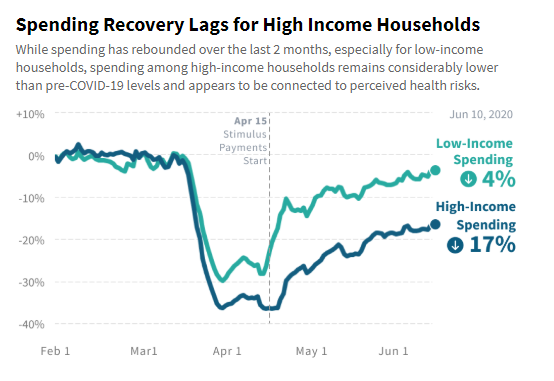 Over time, re-distribution should lead to higher GDP growth, though that may not necessarily be bullish for equities. Other government measures, such as higher tax rates, re-regulation, and labor friendly legislation like a higher minimum wage are likely to squeeze profit margins. Wage growth has not kept pace with productivity gains since 1970, and much of the excess gains have gone to the suppliers of capital. Expect the returns to capital to fall, and returns to labor to rise under a Democrat-led administration. 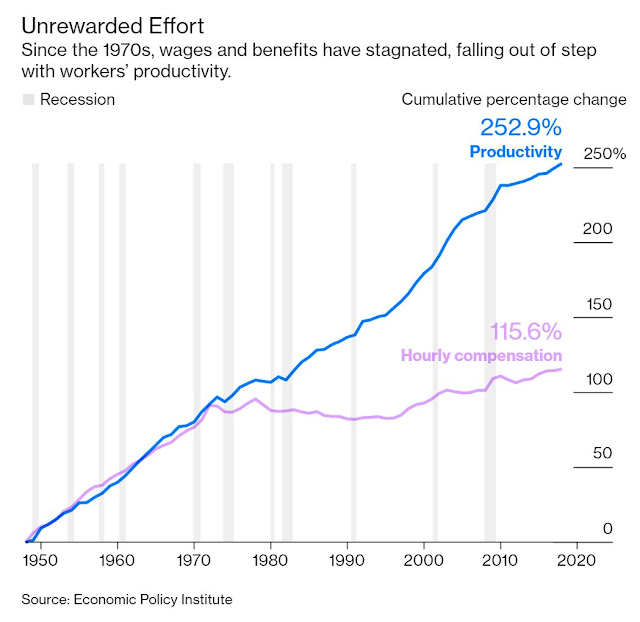 Here is what to watch for over the next four months.

The market has not fully discounted the prospect of a Biden win just yet. If and when it does, it may act to de-rate equities based on the prospect of a lower 2021 earnings outlook. A Biden victory will mean a 6-12% fall in 2021 earnings, which translates to a 6-12% decline in stock prices if P/E multiples stay the same. Should the market see P/E compression from the current lofty levels, downside risk could be considerably more.

Don’t forget to stay tuned for our tactical market analysis to be published tomorrow.