Mid-week market update: It is said that the adage “hindsight is 2020” may have been a garbled warning from a future time traveler. This year is certainly turning up like that.

The S&P 500 fell -20% in Q1 2020, and recovered 20% in Q2. It’s been that kind of year. Tactically, the index is backtesting the violation of the rising channel, but the bearish island reversal remains intact, and the market has been unable to breach the moat surround the island at about 3160.

To say that 2020 has been an unusual year is an understatement.

Market internals still look wobbly under the hood. Equity risk appetite, as measured by the high beta to low volatility ratio, and different versions of Advance-Decline breadth, are all showing lower highs, and, in some cases, lower lows. 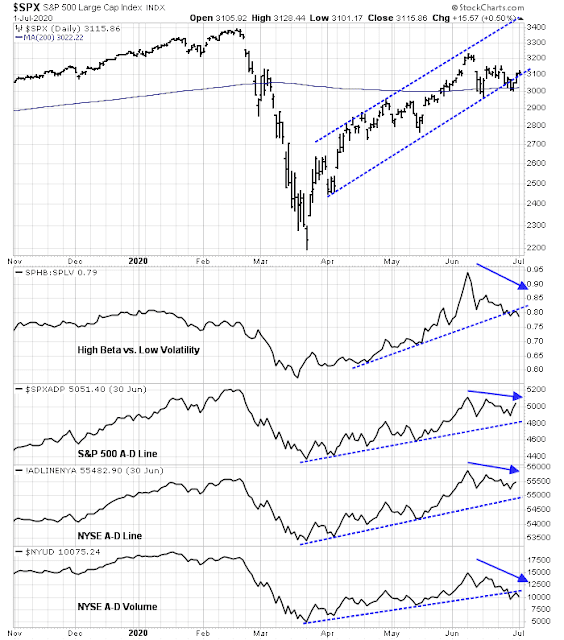 Credit market risk appetite, as measured by high yield (junk) bond prices to duration-equivalent Treasuries, and by leveraged loans, are also exhibiting minor negative divergences. This is a somewhat surprising result in light of the Fed`s efforts to keep credit spreads from blowing out.

In addition, Troy Bombardia pointed out that SKEW is spiking, which may be a warning of heightened tail-risk going forward. 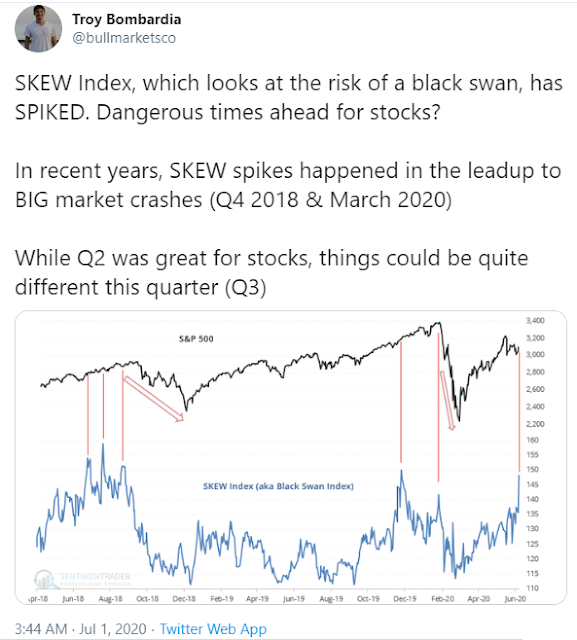 I interpret these conditions as warnings of rising uncertainty and likely volatility. Jerome Powell highlighted the high level of uncertainty about the future outlook in yesterday`s testimony to Congress [emphasis added].

While recent economic data offer some positive signs, we are keeping in mind that more than 20 million Americans have lost their jobs, and that the pain has not been evenly spread. The rise in joblessness has been especially severe for lower-wage workers, for women, and for African Americans and Hispanics. This reversal of economic fortune has caused a level of pain that is hard to capture in words as lives are upended amid great uncertainty about the future.

Output and employment remain far below their pre-pandemic levels. The path forward for the economy is extraordinarily uncertain and will depend in large part on our success in containing the virus. A full recovery is unlikely until people are confident that it is safe to reengage in a broad range of activities.

As another measure of uncertainty leading up to Q2 earnings season, my former Merrill Lynch colleague and small cap specialist Satys Pradhuman observed that small cap earnings estimate dispersion has spiked, and readings are above the levels seen at extremes of the GFC. 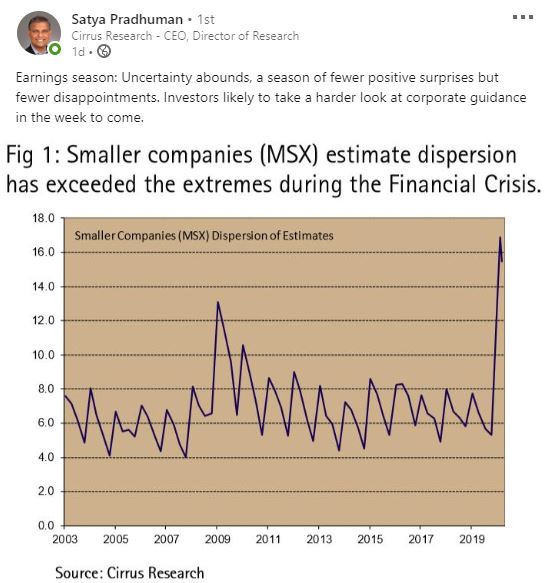 At the same time, the VIX Index, as well as the term structure of the VIX, are relatively benign and show no signs of volatility fears. 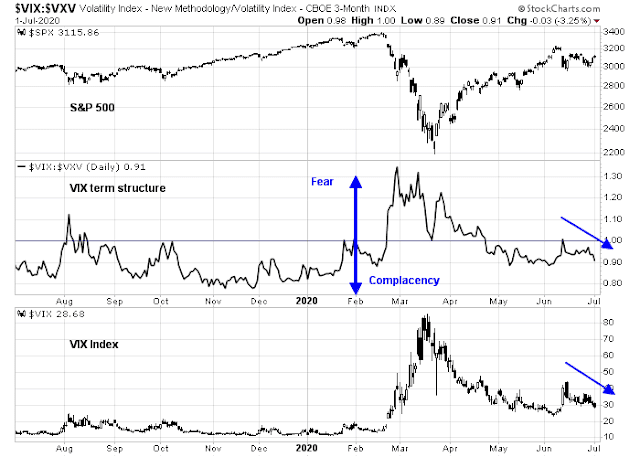 I wrote on the weekend (see A shallow or deep pullback?) that while I was tactically bearish, but I was keeping an open mind about the possibility of a sideways consolidation after the trend break of the rising channel. It appears that the market is resolving itself with a period of sideways choppiness.

Short-term breadth was already at overbought extremes based on Tuesday night’s closing prices. Despite today’s market advance, the roughly even balance between advances and declines is likely to slightly ease the overbought reading. 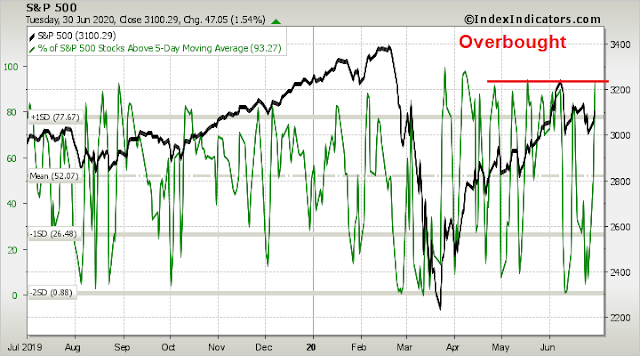 My inner investor remains neutrally positioned. My inner trader is still short the market. His base case scenario is now a range-bound consolidation, and he expects to cover his short if and when the market reaches the bottom of the recent range and becomes oversold.