A shallow or deep pullback? – Humble Student of the Markets 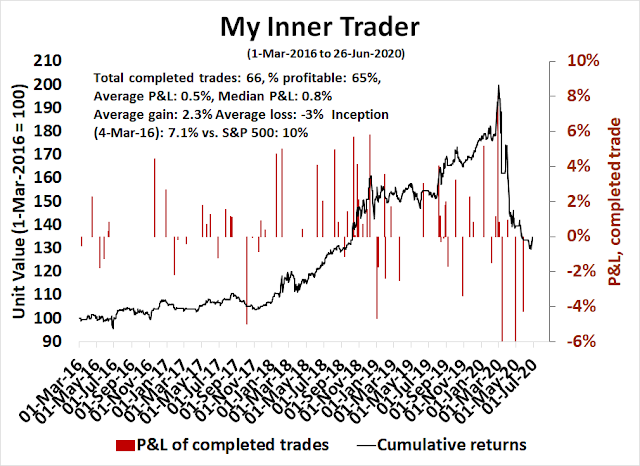 I have been cautious about the equity outlook for several weeks, and the market triggered several bearish tripwires last week. First, the S&P 500 violated a rising trend channel, and fell through its 200 day moving average (dma). Other trend line violations observed were the high beta to low volatility ratio, which is an equity risk appetite indicator, and the NYSE Advance-Decline Volume Line, though the NYSE A-D Line remains in an uptrend. 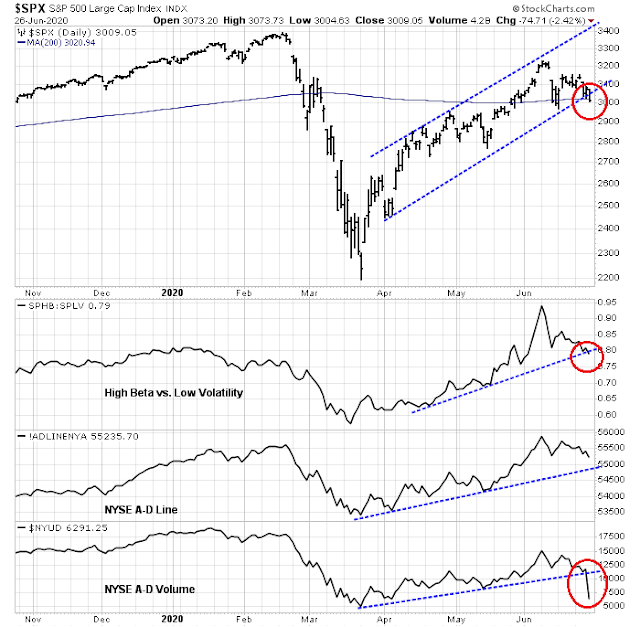 Is this the beginning of a minor pullback where the market consolidates sideways, or the start of a major correction?

Here is the case for a minor pullback. The market is becoming oversold in the short run, and due for a bounce. 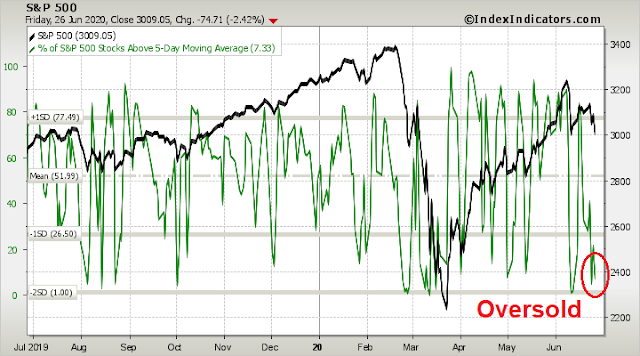 Ukarlewitz observed that heavy sell-offs like Friday’s -2.4% weakness tend to mark the end of short-term corrections. The exceptions are downdrafts that are part of a major correction like the one we experienced in February and March. 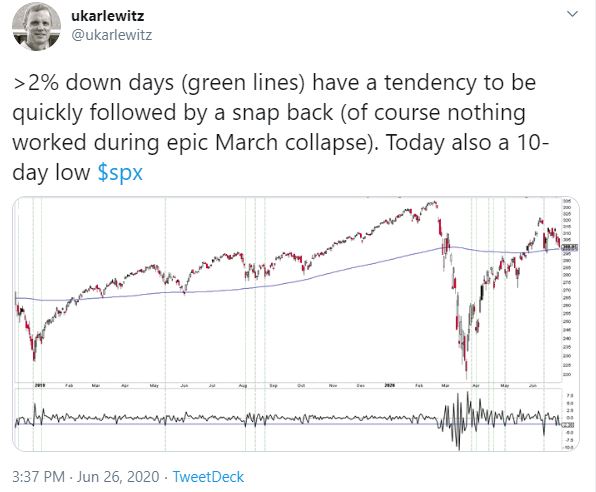 These conditions set up circumstances where the average calls for a relief rally, but with an extreme tail-risk of further downside. How should play those odds?

Let’s consider the longer term picture to assess the chances of a major downdraft. I have highlighted plenty of warnings, or bearish setups, in the past few weeks. Many analysts have observed that the equity-only put/call ratio (CPCE) has been extremely low, indicating complacency. Less noticed has been the index put/call ratio (CPCI) has become elevated, indicating cautiousness. This sets up a bearish divergence between retail traders, who mainly trade equity options, against professionals who hedge with index options. Past extremes in a dumb (retail) money/smart (professional) money dichotomy has seen the market either correct, or experience difficulty advancing. 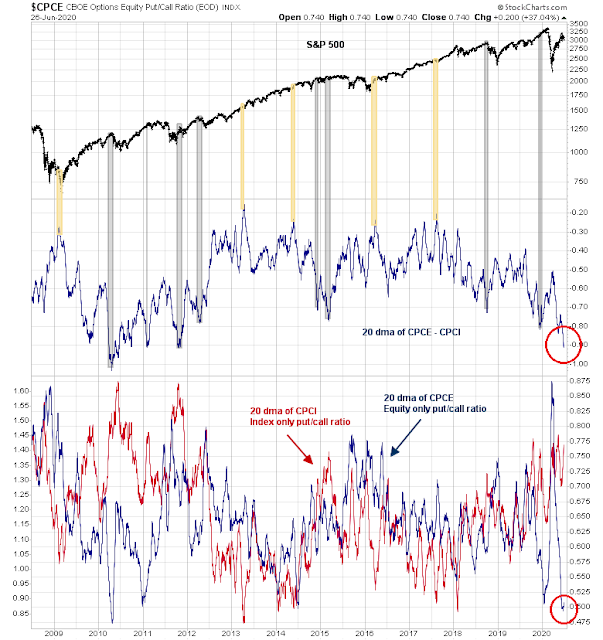 Arguably, the weakness from the June 8 top was an unwind of retail speculative fever. Bespoke found that the returns to the share price factor fell almost monotonically by price decile. The stocks with the smallest share prices did the worse, while the ones with the highest share prices fell the least. This is an indirect signal that the small retail speculative traders, who tend to favor low-priced stocks, got long and hurt in the pullback. 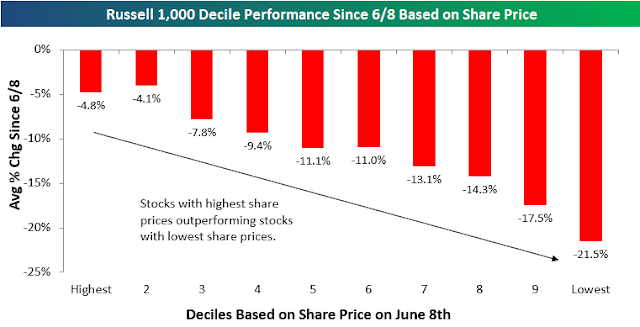 Troy Bombardia at SentimenTrader also issued a number of warnings. The percentage of stocks with MACD sell signals were spiking across the board, indicating a broad technical deterioration in market internals. These signals were seen across a broad swath of indices: the S&P 500, NASDAQ, Euro STOXX 50, and Nikkei. 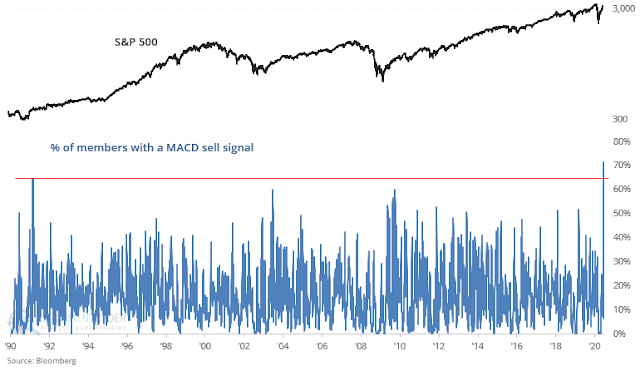 He also observed that Street analysts have been chasing the rally by upgrading their price targets in a FOMO-like stampede. Such instances have usually been resolved by pullbacks and corrections in the next 2-3 months. 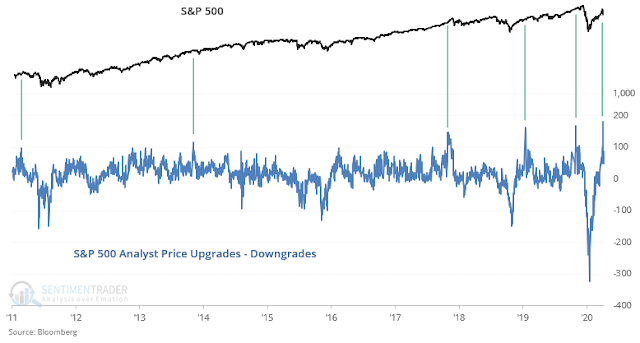 In the past few weeks, a number of market commentators have attributed the rally from the March low to Fed intervention. While I have not been a fan of singular reasons for market moves, there are good reasons why Fed induced liquidity can buoy asset prices. Moreover, there is an empirical relationship between the size of the Fed’s balance sheet (blue line) and stock prices (black line). 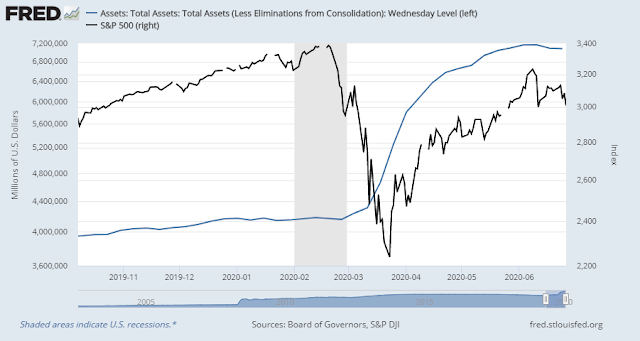 We can see that Fed’s balance sheet contracted for a second week in a row, and the contraction was attributed to the unwind of USD swap lines by foreign central banks. Open market operations continue to inject liquidity into the market.  The latest week’s report shows that Fed holdings of Treasuries and other paper rose by 53.2 billion to 6.1 trillion, though that represented a deceleration from the previous week.

None of this means that the Fed is about to stop supporting the market with additional liquidity. Jerome Powell has made it clear that the Fed is focused on normalizing employment levels while asset price levels are only a secondary consideration (see A bleak decade for US equities). There is a Powell Put, but only indirectly. Recent continuing jobless claims figures (red line, inverted scale) are pointing to further improvement in the upcoming June Employment Report on July 2. While the recent surge in COVID-19 cases will undoubtedly be a concern for the Fed as they could result in a second wave of unemployment, the expected improvement in Non-Farm Payroll will make for a second consecutive month of “less awful” jobs numbers. These conditions are unlikely to prompt Fed policy makers to press harder down on the quantitative easing accelerator, and that could act as a brake on stock prices. 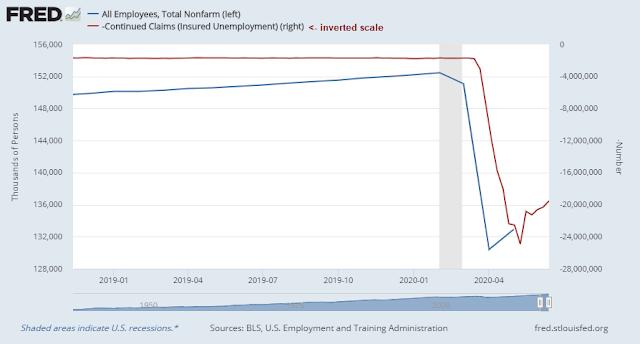 The unwinding of foreign central bank swap lines are indicative of a reduction of offshore USD shortages, and this development could also create some headwinds for equity prices. The swap line unwind coincided with the greenback catching a bid during the same period, which has also manifested itself in EM currency weakness. EM currencies are the most vulnerable to offshore dollar funding pressures and act like canaries in the cross-asset risk appetite coalmine. The combination of USD strength and EM currency weakness raises a warning flag for the price of risky assets like stocks. 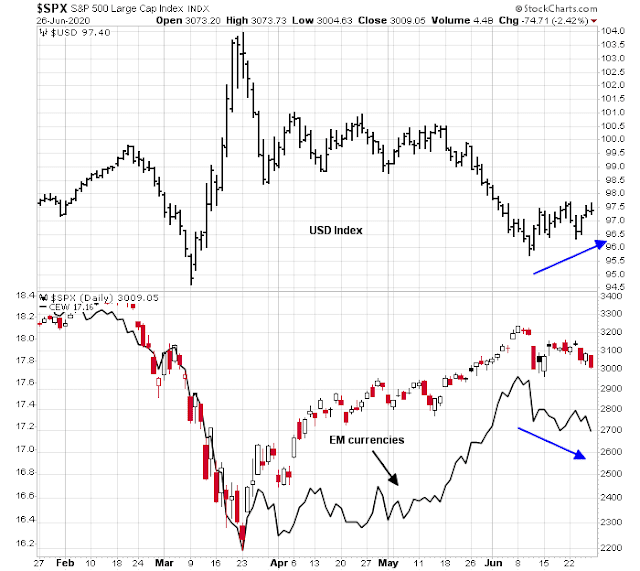 So where does that leave us? Is this just a minor market setback, or the start of a major correction? I am leaning towards the major corrective scenario, but I am keeping an open mind as to the outcome.

The market could see further selling pressure on Monday and Tuesday from portfolio rebalancing flows as managers sell equities and buy bonds to re-weight their portfolios back to their targets. While we may see some further minor violations of support levels, the bulls need to hold the line here. The next support level for the S&P 500 is the 50 dma at 2980, with further support at the Fibonacci retracement level of ~2845.

My inner investor is neutrally positioned at his investment policy asset allocation targets. My inner trader remains short the market.

8 thoughts on “A shallow or deep pullback?”