What would a Biden presidency look like? – Humble Student of the Markets

Joe Biden has officially clinched the Democratic nomination for president, and his odds of winning the Presidency in November have been steadily rising, and he is now at 54% on PredictIt. For the uninitiated, the contract pays off at $1.00 if a candidate wins, so buying the Biden contract at $0.54 implies a 54% of a Biden victory. 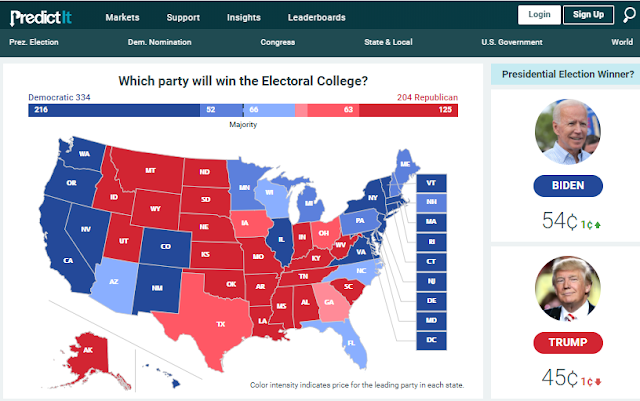 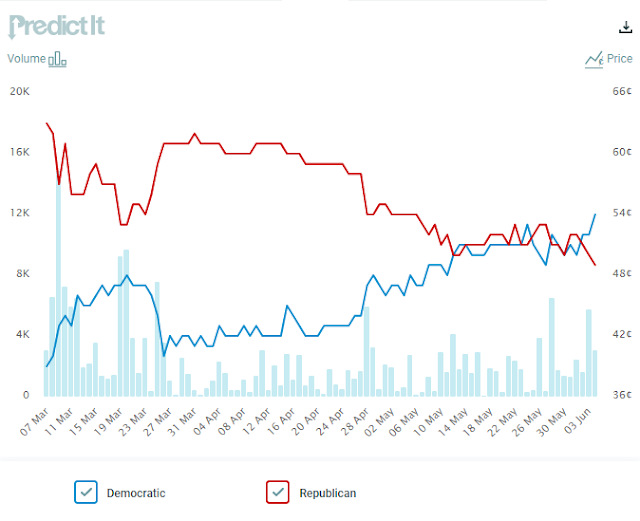 While this is not meant to be an endorsement of any candidate or political party, it is time to contemplate what a Biden victory might mean for the economy and the markets. If Biden were to win, there is also a decent chance that the Democrats might capture control of both chambers of Congress. How should investors react to that outcome?

The law and order card

In response to the current bout of unrest, President Trump has played the law and order card to assert control of the situation. This could be evocative of Richard Nixon’s successful 1968 campaign to win the White House based on a similar law and order theme. For those who can remember, 1968 was marked by incredible political turmoil, marked by:

Nixon’s gamble worked, and he won. Moreover, the stock market shrugged off most of these events and rose in 1968. 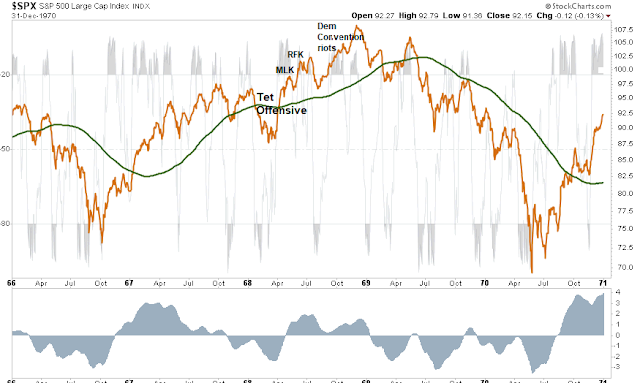 Could Trump repeat the Nixon experience? Probably not. A recent Morning Consult poll showed that the law and order stance (or at least Trump’s version) is not playing well with the electorate, and an ABC-Ipsos poll came up with similar results. When asked if the respondent approved of President Trump’s handling of the protests and demonstrations in response to the death of George Floyd, the spread between “Excellent/Very Good” and “Only Fair/Poor” among all registered voters was -35%. Even among respondents who already approve of Trump’s performance, the spread was only +29%. Normally, he should be winning this demographics by 50% or more. 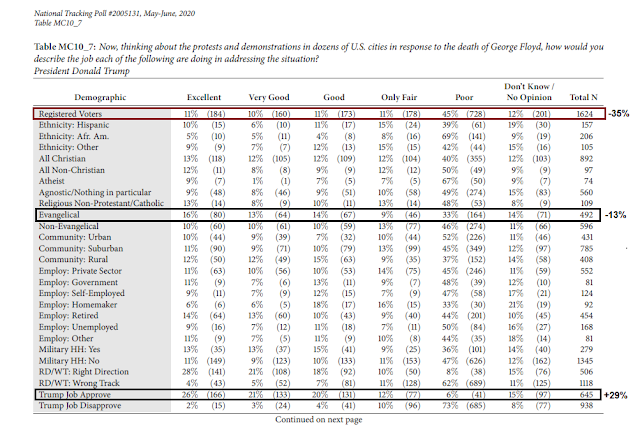 Even among evangelical voters, which have been a bedrock of Republican support, the spread was -13%. Fox News report that 700 Club evangelical leader Pat Roberson chided Trump’s actions.

Evangelical leader Pat Robertson criticized President Trump Tuesday for berating governors and threatening to deploy the military amid the racially charged protests and riots sweeping the nation following the death of George Floyd.

“It seems like now is the time to say, ‘I understand your pain, I want to comfort you, I think it’s time we love each other,'” Robertson said on “The 700 Club.”

“But the president took a different course. He said ‘I am the president of law and order’ and he issued a heads-up. He said, ‘I am ready to send in military troops if the nation’s governors don’t act to quell the violence that has rocked American cities.’ Matter of fact, he spoke of them as being ‘jerks.’ You just don’t do that, Mr. President! It isn’t cool!”

The law and order card isn’t working, and Trump’s support is eroding. There are five months until the election. While five months is a long time is politics, current polling is not favorable for Trump’s electoral chances.

For investors, the most important focus is economic policy. While we don’t know the exact makeup of Biden’s economic team, we can get some clues of the philosophical direction by analyzing the writings of Jared Bernstein, who was Biden’s former chief economist. Bernstein penned a Washington Post OpEd in December outlining what he believed to be the “big economic lessons of the decade”. He followed up with further details in a blog post, with my interpretation in brackets.

The most immediate effect of these implicit policy prescriptions is higher taxes and lower operating margins from inequality initiatives. The Trump tax cuts of 2017 boosted earnings by 7-9%. While Biden’s official position is he will unwind some, but not all, of Trump’s corporate tax cuts, expect greater regulatory burden and inequality policies such as higher minimum wage laws to cut into operating margins under a Biden Presidency. Pencil in a $10 to $20 cut to S&P 500 2021 earnings from Biden’s tax policy. 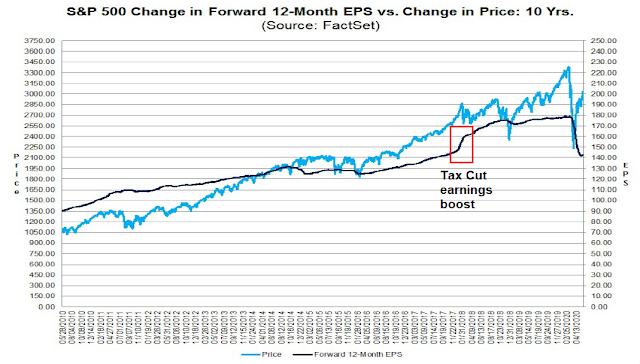 Longer term, the following are all likely under a Biden presidency, and they are not mutually exclusive.

Until we know the exact makeup of Congress and the cabinet, it is impossible to forecast the exact magnitude of those factors.

The rise of the bomb throwers

Should the Democrats win in a landslide, or Blue Wave, and gain control of the White House, the Senate, and the House of Representatives, there is a distinct possibility of a radical shift in the Overton Window, or the range of acceptable political discourse. A Blue Wave would embolden the progressive wing of the party to bring in the radical thinkers and metaphorical bomb throwers into government.

One of the leading candidates for a bomb thrower to challenge orthodoxy in a Biden administration is Stephanie Kelton, who is a leading advocate of MMT. As I pointed out before, MMT postulates that a country can borrow in its currency as long as the bond market signals support. Instead of asking “how will you pay for that” when proposing a government spending program, the question turns to “can we finance it at a reasonable rate?” When the market is willing to lend to the federal government for 10 years at well under 1%, the question is an easy one to answer. The implementation of MMT as policy will become a Grand Experiment, just as the Laffer Curve was under Reagan. Expect greater expansion of government spending programs. We will find out in a decade whether inflation pressures rise significantly, as the Austrian economists predict, or if the MMTers are right.

A more radical economic bomb thrower is Mariana Mazzucato, who questioned the fundamental question of how value is created, and the policy implications of the answer. This YouTube video of her TED talk raised the following provocative questions:

Mazzucato believes governments to be more ambitious in ensuring the public good. She cited the as an example difference between airline bailouts in Austria and the UK. Austrian airlines received bailouts on the condition of meeting emissions targets, while the UK government bailed out airlines without no conditionality.

Bottom line: There is a distinct possibility that policy could take a dramatic lurch to the left after the election.

Biden is on record as stating that healthcare reforms should be made slowly. He would begin by improving on the ACA, or Obamacare, and then by possibly adding a public option. He is pragmatic about Medicare for All, and does not believe the Democrats have the political capital to fight another healthcare battle in the space of 10 years. However, the pandemic induced recession has exposed the cracks in the American system of employer funded health insurance, and that may induce greater popular support for a single-payer or public health insurance option.

Healthcare stocks are currently moving more ore less in lockstep with each other, but a Biden win is likely to put greater downward relative pressure on healthcare providers in particular. At a minimum, investors who want exposure to this sector during the COVID-19 era should focus on the healthcare momentum ETF (PTH)/ 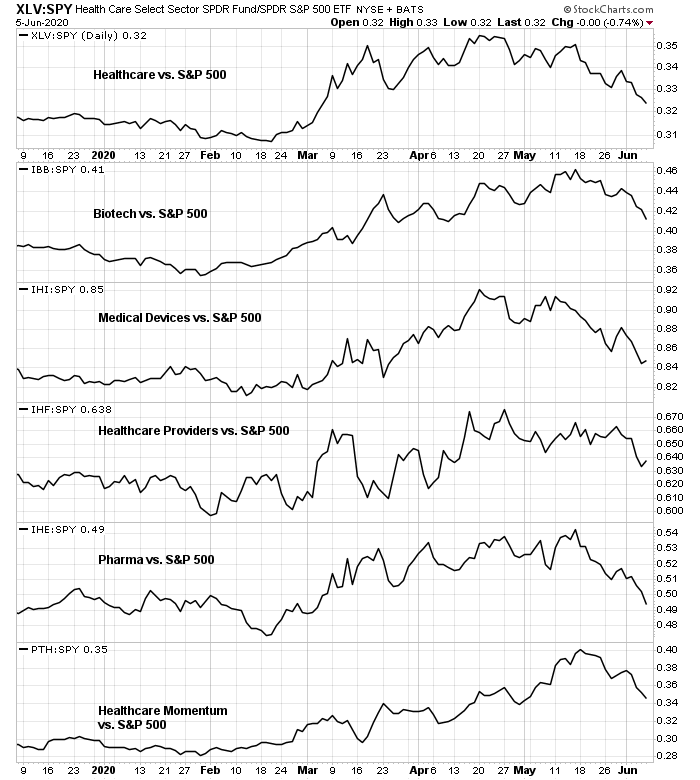 The one silver lining under a Biden Presidency is trade policy. Biden has made it clear that he does not favor Trump’s America First approach, and he would work with allies through international organizations built since the post-World War II era to resolve trade and other frictions. While that does not necessarily mean a softer line with China, the nature of the dialog will be very different.

As an example, Obama negotiated the Trans Pacific Partnership as a multi-lateral firewall against Chinese trade dominance, and Biden would return to that approach. One of the contradictions in Trump’s trade conflict with China is the tension between lowering the trade deficit and the desire to open the Chinese market to American companies through the protection of intellectual property rights. If China were to fully open its economy to foreign companies, FDI would rise, and American companies would pour into China. American owned Chinese factories would produce goods for export back to the US, and raise the trade deficit. So what does Trump really want, a lower trade deficit, or expanded protection for IP?

The Biden approach would tone down the trade rhetoric, but the strategic competition between the two countries will remain, which has the possibility to turn into a new cold war. However, expect the level of trade friction between the US and other countries and regions like the EU to fall significantly.

The trade war factor, which measures the relative performance of domestic companies to the index, should see a dramatic decline in tensions. While Biden’s tax policy is likely to reduce earnings, his trade policy is the silver lining that lowers uncertainty.

In conclusion, a Biden victory is expected to be a net mild negative for equity prices. Much depends on the degree of control by the Democrats should Biden win the White House. The chance of a Blue Wave sweep is possible, and it would embolden the progressives within the Democratic Party to steer policy further to the left with bearish consequences for the suppliers of capital.

55 thoughts on “What would a Biden presidency look like?”