Buy the breadth thrusts and FOMO stampede? – Humble Student of the Markets 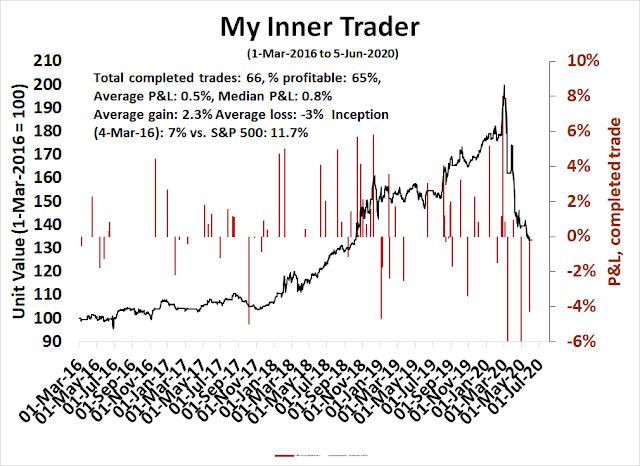 Last week, technical analyst Walter Deemer pointed out that the market had flashed a “breakaway momentum” buy signal. He did qualify the condition, “Supposed to get it near the beginning of a powerful move, not after a 42% advance (altho did have late signals Jul 12 2016 and Nov 20 1950). Definitely not its finest moment…” 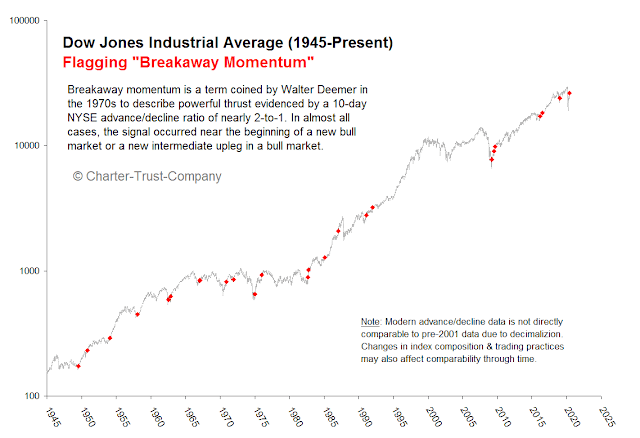 As well, Deemer reported on Friday that the market achieved both a Whaley Breadth Thrust and a Whaley Volume Thrust.

Could this be the start of a new bull leg? On one hand, the market’s animal spirits are stirring, and breadth thrusts like Deemer’s breakaway momentum signal have historically been bullish. There are usually signals of a full-fledged Fear of Missing Out (FOMO) stampede, especially in light of the surprisingly strong May Jobs Report (see May Jobs Report: Back from furlough). If you only believe technical analysis is all that matters, then you should be bullish.

On the other hand, the market is trading at a stratospheric forward P/E of 22.4, and at a 2021 P/E of 19.5. To buy now means adopting the late 1990’s go-go mentality that earnings don’t matter, and all that matters is price momentum.

Careers were made and severely damaged during the dot-com era. Should traders throw caution to the wind?

To answer that question, we use factor analysis to delve into market psychology. The dot-com bubble of the late 1990’s was characterized by the frenzy of the belief in a new era. Earnings didn’t matter, what mattered were eyeballs and addressable market for a product or service. Low quality stocks with negative earnings and cash flow outperformed high quality stocks with positive earnings and cash flows.

A similar effect can also be observed at the recessionary market bottoms. The shares of beaten down nearly dead zombie companies stage a furious rally as they act like out-of-the-money call options. I made a speculative call to buy the so-called Phoenix stocks a week before the ultimate bottom in March 2009 (see Phoenix rising?).

An analysis of current factor rotation reveals an anomalous story of market psychology. As a reminder, our primary tool is the Relative Rotation Graph (RRG). Relative Rotation Graphs, or RRG charts, are a way of depicting the changes in leadership of different groups, such as sectors, countries or regions, or market factors. The charts are organized into four quadrants. The typical group rotation pattern occurs in a clockwise fashion. Leading groups (top right) deteriorate to weakening groups (bottom right), which then rotates to lagging groups (bottom left), which changes to improving groups (top left), and finally completes the cycle by improving to leading groups (top right) again.

In light of the strong market rally, some factor returns were no surprises. Large cap growth, which were the FANG+ market leaders, is starting to falter. So was price momentum, which is also dominated by FANG+ names. Up and coming leadership consisted of high beta and small cap stocks, though the emerging leadership of small cap growth stocks is a minor surprise.

Here is the bigger surprise. Why are the high quality and shareholder yield factors performing so well if Phoenix stocks would normally outpace the market in a recessionary rebound? 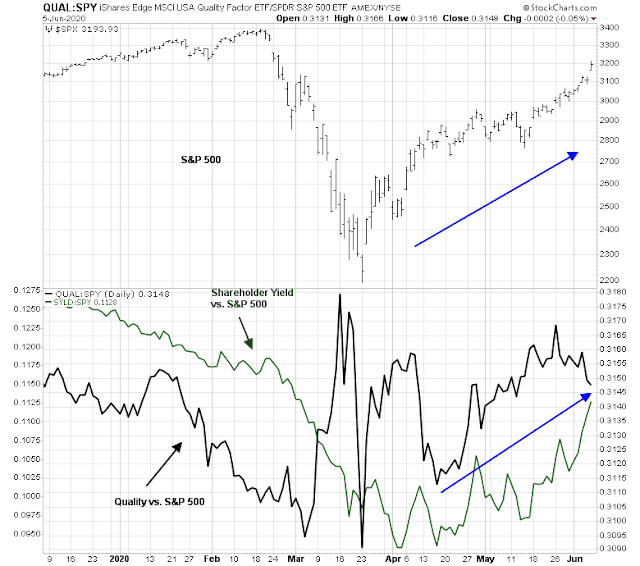 We can see a similar set of circumstances at play in small caps. The bottom panel shows the now familiar small to large cap ratio (black line) indicating a small cap revival. The Russell 2000 (RUT) to S&P 600 (SML) is a quality, or junk, factor at play within the small cap universe. The S&P 600 has a much stricter profitability criteria for index inclusion compared to the Russell 2000, and the RUT/SML ratio therefore represents a small cap junk factor. So why were the small cap junk stocks tanking on a relative basis since the market broke out through its 61.8% retracement level since mid-May? 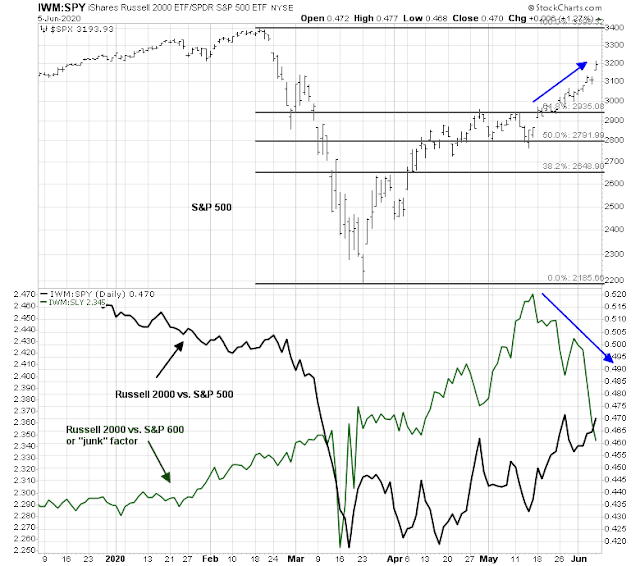 Recently, some anomalies have appeared. Low quality bottomed in 2018 just as the stock market topped out. We saw a second bottom in September 2019 just as the market began its melt-up. From a strictly technician’s perspective, the combination of the  latest parabolic rise of this factor from September 2019. along with the stock market could be interpreted as just a sustained bull market. The COVID-19 crash and subsequent recovery was therefore just a correction within a secular bull.

In that case, the S&P 500 point and figure upside target ranges from 3384-3779, depending on how the analyst sets the parameters. 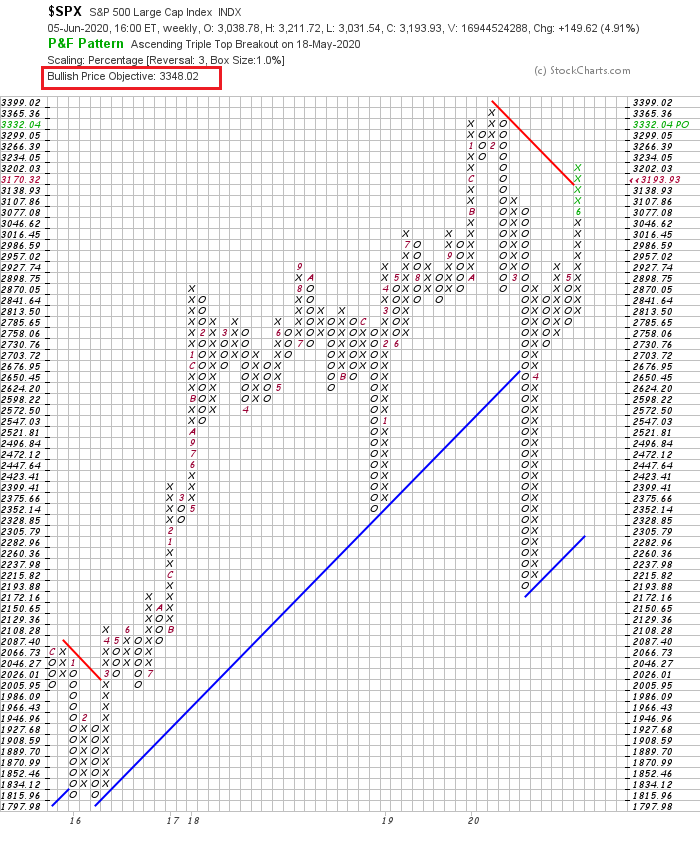 A go-go melt-up ahead?

How realistic is the melt-up scenario?

The intermediate term bull case depends on accepting the thesis of a go-go mentality as manifested by the breakaway momentum signal. This breadth thrust is unusual inasmuch as it was not accompanied by low quality stock leadership that accompanied past recessionary equity market rebounds.

In addition, sentiment is becoming frothy. The normalized equity-only put/call ratio is at a crowded long extreme, which is contrarian bearish. Similar past reading, even during the dot-com bubble era, resolved themselves with short-term pullbacks. None of the bullish sentiment extremes coincided with breakaway momentum signals. 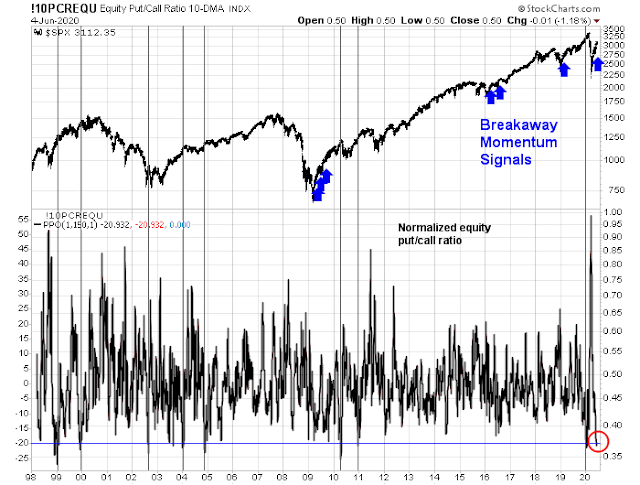 In the big picture, out of these six readings, four of them were part of a topping process. One gave you an immediate plunge and nice rebound (2010) and one gave you a mild correction that then went on to rally for months (2009). It’s a matter of whether you think now is like August 2009, August 2010 or some other time.

Another sign of excessive speculation is the spike in the ratio of Nasdaq to S&P volume. There have been reports of Robinhood traders buying low priced Nasdaq stocks, which is a reason for the skew in this ratio. 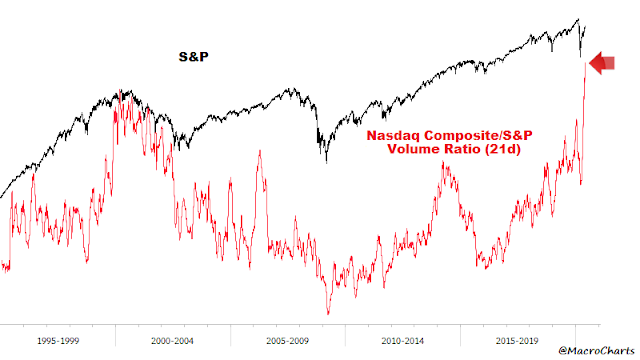 Estimates of hedge fund positioning indicate that global macro and long/short hedge funds are roughly neutrally positioned in equities, and CTAs are in a crowded long. Fast money retail traders are stampeding into the market, encouraged by the zero-commission regime offered by online brokers. The analysis of the stock/bond ratio shows that it has returned to above its 52-week moving average, indicating that a portfolio which did little or nothing in reaction to the COVID-19 crash would have roughly the same asset allocation as pre-crash levels. Therefore there is no need to rebalance, and little demand for equities from long-term investors.

In conclusion, the breakaway momentum and breadth thrust bullish thesis just doesn’t feel right. It is difficult to reconcile a breadth thrust, which is built on the idea of a FOMO stampede by investors jumping on a bullish bandwagon, with the observation of the lack of low quality and zombie stock participation, and extreme bullish sentiment. A FOMO stampede depends on drawing in more traders who can pour money into the market, but the put/call ratio is signaling a bullish sentiment extreme. In that case, where are the buyers?

Consequently, it is difficult to buy into the breakaway momentum bull case. My base case scenario calls for a corrective period to begin in the next few weeks. How the market behaves after the correction is highly dependent on news flow, but at a forward P/E of 22.4, and a 2021 P/E of 19.5, the market is priced for perfection. The bulls better pray that nothing goes wrong.

Looking to the week ahead, it’s difficult to know how far the market’s animal spirits can carry stock prices. Don’t forget that, even before last Friday’s Jobs Report shocker that propelled the stock market higher, equities were advancing even as riots were erupting in American cities. The Fear and Greed Index closed Friday at 66, which is well below the giddy greed levels of 80 or more. Arguably, this rally has more legs. 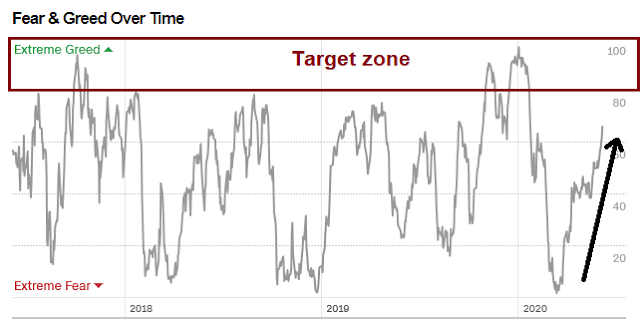 On the other hand, the percentage of stocks above their 50 dma is topping and it’s starting to roll over. The last two times this happened, the market topped out soon after. The 14-day RSI is overbought, and coincided with short-term tops when the % of stocks above their 50 dma weakened. Should the market push higher, watch for negative divergences from the 5 and 14 RSI as warning signs. 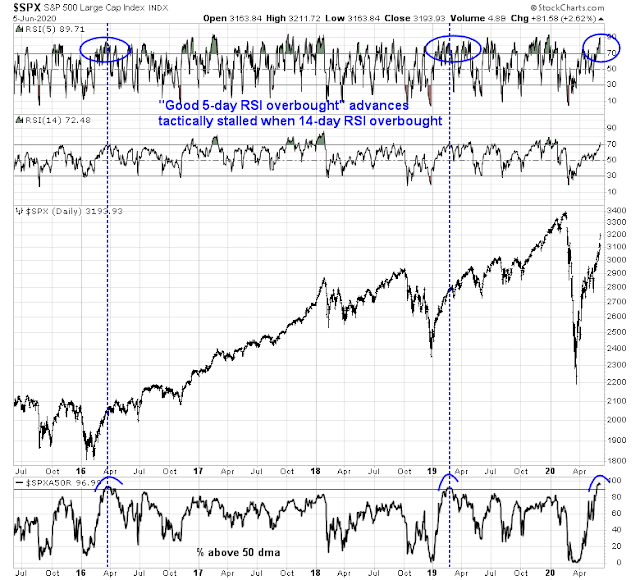 The analysis of breadth also presents a mixed picture and some nagging doubts. While the A-D Line was strong and confirmed market strength, both NYSE and NASDAQ new highs weakened even as the market surged on Friday. 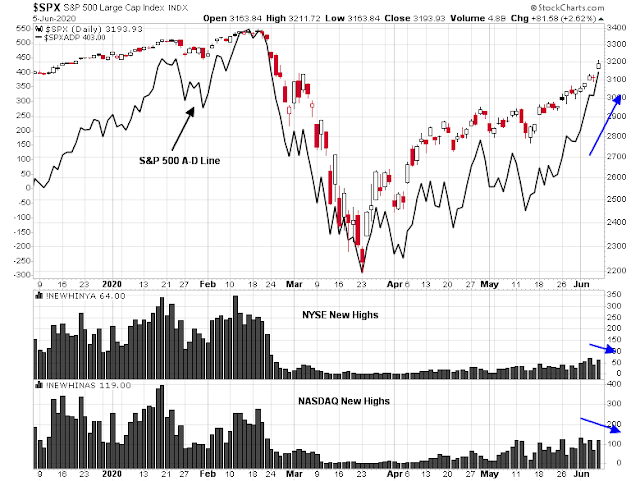 I outlined on Friday some of my reservations about the blowout Jobs Report (see May Jobs Report: Back from furlough). I would also like to add that we don’t know whether the job gains were artificially boosted by PPP incentives for employers to rehire workers while keeping them idle, which would be negative sign that demand isn’t there, or a genuine need to reopen businesses. As well, government jobs fell by -585K in May after declining by -963K in April. This is a worrisome trend, indicating strains on state and local government budgets, which will ultimately show up in the muni market.

In the short run, none of the Jobs Report details matter. The next major market moving event to watch for is the FOMC meeting on Wednesday. The market will be watching closely to see how the Fed reacts to the employment surprise. Trump economic advisor Larry Kudlow stated on Fox that the third quarter “could be the fastest-growing quarter in U.S. history.”, which would reduce the urgency of further fiscal stimulus. Will the Fed feel the same way? 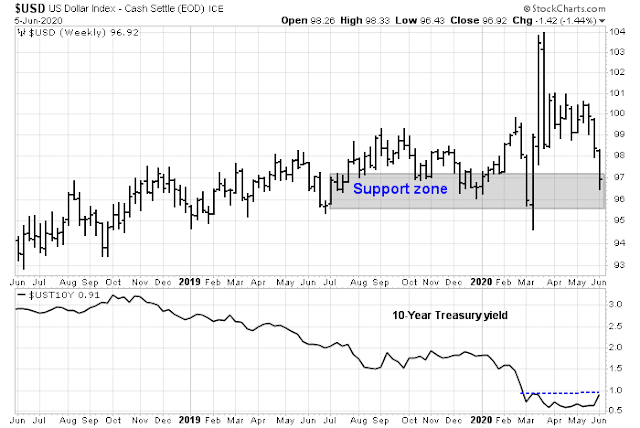 My inner investor is neutrally positioned. While my bias is to call for weakness in the next few weeks and into Q3, I would guesstimate a 30% chance that the surge continues and the S&P 500 continues rising to test its old highs.

My inner trader is confused by the cross-currents. He does not see a trading edge, so he has stepped to the sidelines for now.

154 thoughts on “Buy the breadth thrusts and FOMO stampede?”