Trading sardines, or eating sardines? – Humble Student of the Markets

Mid-week market update: Experienced investors know the story about the difference between trading sardines and eating sardines. Here is how Seth Klarman recounted the story:

There is the old story about the market craze in sardine trading when the sardines disappeared from their traditional waters in Monterey, California. The commodity traders bid them up and the price of a can of sardines soared. One day a buyer decided to treat himself to an expensive meal and actually opened a can and started eating. He immediately became ill and told the seller the sardines were no good. The seller said, “You don’t understand. These are not eating sardines, they are trading sardines.”‘

Like sardine traders, many financial-market participants are attracted to speculation, never bothering to taste the sardines they are trading. Speculation offers the prospect of instant gratification; why get rich slowly if you can get rich quickly?

Speculation involves going along with the crowd, not against it. There is comfort in consensus; those in the majority gain confidence from their very number. Today many financial-market participants, knowingly or unknowingly, have become speculators. They may not even realize that they are playing a “greater-fool game,” buying overvalued securities and expecting—hoping—to find someone, a greater fool, to buy from them at a still higher price.

There is great allure to treating stocks as pieces of paper that you trade. Viewing stocks this way requires neither rigorous analysis nor knowledge of the underlying businesses. Moreover, trading in and of itself can be exciting and, as long as the market is rising, lucrative. But essentially it is speculating, not investing.

In light of the surprising and powerful stock market rally off the March bottom, you have to ask yourself, “Am I looking for trading sardines, or eating sardines?”

Traders and speculators have far shorter time frames than investors. One example of a successful speculator is Stan Druckenmiller, who admitted on CNBC that he was humbled by the market comeback, and he had said made just 3% during the market’s 40% rally off the March bottom

The bull case can be summarized by the strong breadth exhibited by the advance. The NYSE Advance-Decline line has already made an all-time high. The beleaguered small caps, which had been lagging the market on the way down, has revived. 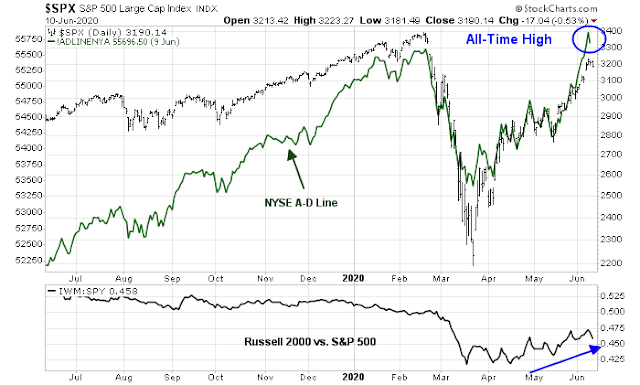 In addition, the ratio of cyclical to defensive stocks have turned up dramatically and made a new recovery high. 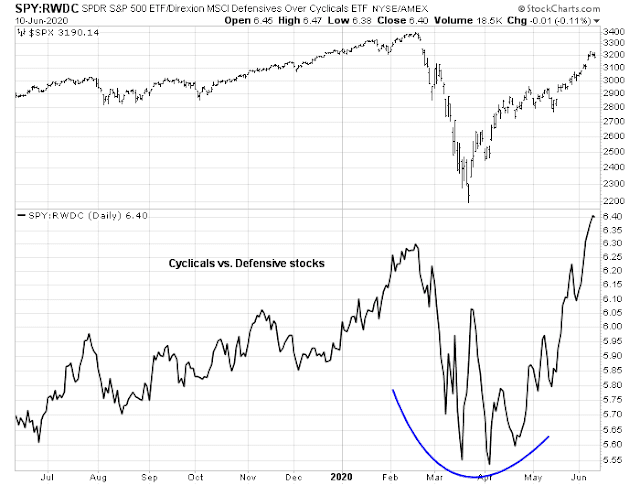 These are all market signals of a cyclical revival off the recession bottom. The market is rising while flashing a series of “good overbought” RSI signals. It’s time to buy. 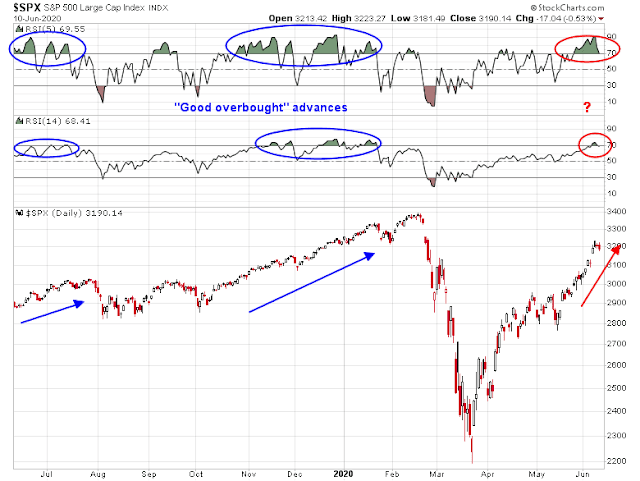 The bear case consists of cautionary signals from sentiment and valuation. The Citi Panic/Euphoria Model has risen to euphoric levels last seen in 2002. 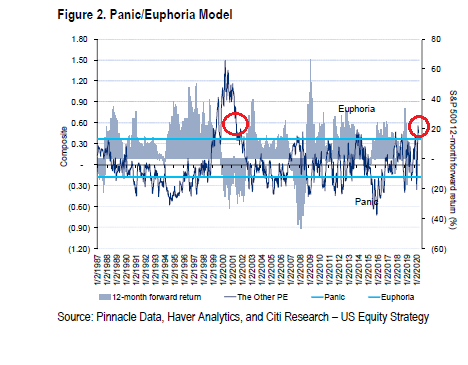 That’s no surprise, because the market’s forward P/E and median stock’s forward P/E have risen to levels not seen since 2001, which was the descent from the dot-com bust. 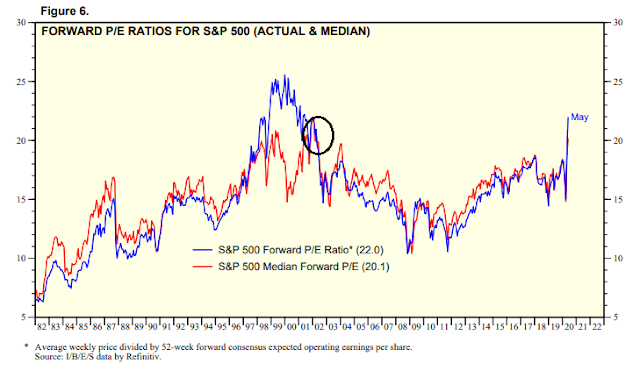 The degree of retail speculation has become rampant. Here is another example. Robinhood traders have been piling into the common shares of Hertz, which recently filed for Chapter 11 bankruptcy protection. The shares have bounced sharply off their bottom, and nimble speculators could have made ten-bagger gains.

At last report, Hertz unsecured bonds, which rank ahead of common shareholders on liquidation, were trading at at between 12c and 33c on the dollar. If the market believes the unsecured bondholders are that unlikely to be fully paid out, common shareholders are certain to be wiped out in any restructuring. (By the way, if anyone wants to dive into the Hertz financials to figure out their capital structure, please let me know the results of your analysis.) 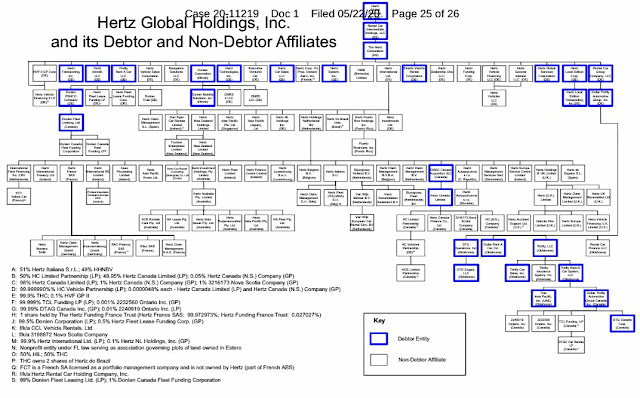 It seems that bankruptcy is now the new buy signal. While sardine traders don’t care about intrinsic value, sardine eaters have to be concerned about the sentiment implications of this development.

As another example of the retail frenzy, this tweet from Jesse Felder requires no further explanation.

When shares keep rising, managing the hedge entails buying more stock. That’s where the Reddit set perceives a weakness. A favorite tactic on r/WSB is to swamp the market with call purchases early in the morning in an attempt to force dealers to keep buying stock. Up and up everything goes—supposedly. As the stock price rises, so does the value of the calls, often by far more.

In this worldview, the only constraint on success is the force of one’s own conviction and willingness to act upon it. An added attraction: It’s all relatively cheap in terms of an option’s simple dollar cost. For the price of one share of Amazon.com Inc.—about $1,965 on Feb. 25—a decent-size campaign can be waged in long-shot options trading for pennies. That matters nowadays, when the rise of exchange-traded funds and mutual funds has convinced U.S. companies that they no longer need to split their stocks to keep the share price manageable for retail investors. Many companies now trade for three or four figures a share.

SentimenTrader pointed out last Friday that small traders are back to their old tricks.

At the peak of speculative fervor in February, small traders bought to open 7.5 million call contracts.

Watch what people do, not what they say. They’re full-bore bullish, on steroids. 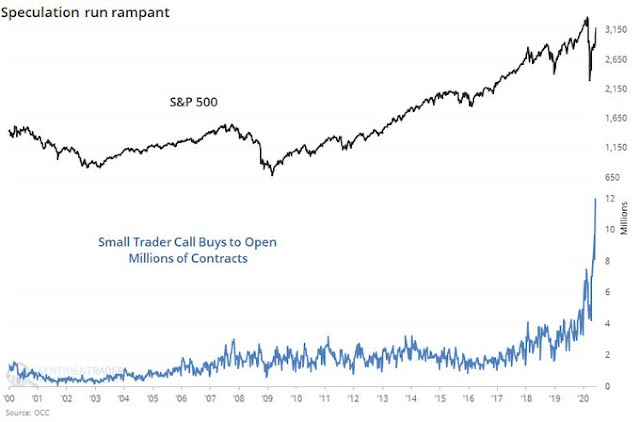 As well, the Market Ear pointed out that long/short equity betas are also showing a crowded long positioning. 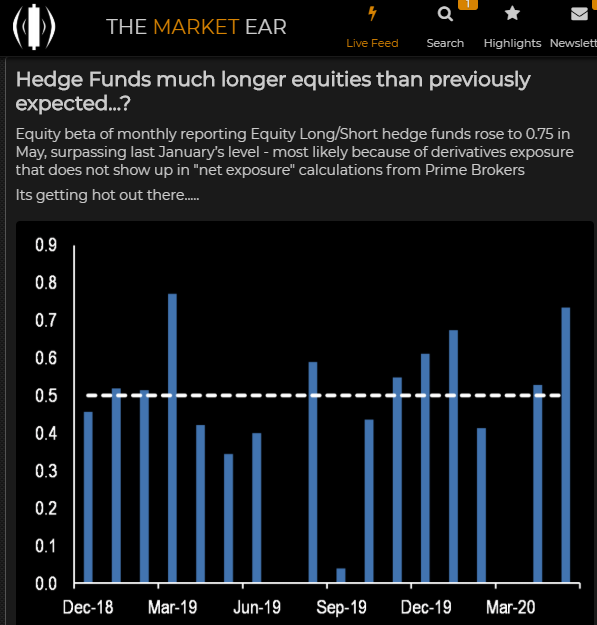 These kinds of sentiment excesses have to be concerning, even for sardine traders who are purely focused on price momentum.

Here is how I resolve the short-term bull and bear cases. The signs of excessively bullish sentiment is a warning, or a bearish trade setup, but it’s too early to go short just yet.

The equity-only put/call ratio reach a low of 0.37 on Monday, and its 10 dma reached 0.44 on Tuesday. In the past, such readings have signaled limited upside potential, but the market did not retreat until either RSI recycled below an overbought level, or flash negative divergences with the price action. 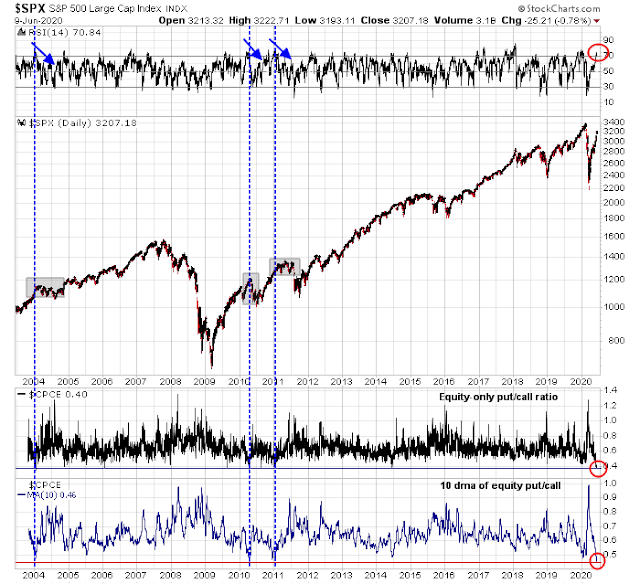 Should RSI flash “sell”, the next question is whether the signal is calling for a minor correction, or a deeper pullback. From a technical perspective, I would be inclined to give the bull case the benefit of the doubt until the rising trend line on the ratio of high beta to low volatility are violated. It is difficult to judge the strength of a trend until it pulls back, and you can gauge its strength by the scale of its short-term weakness. 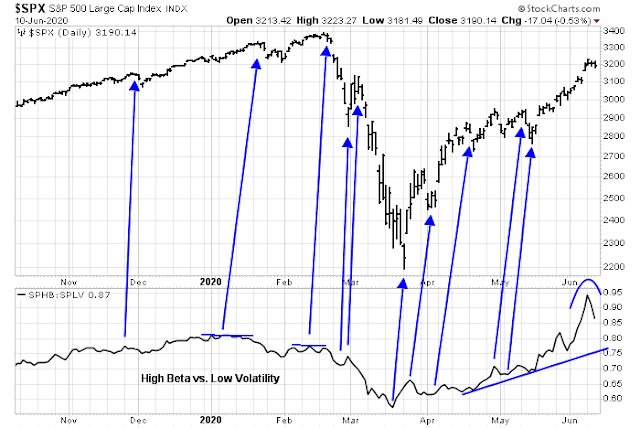 My inner trader is in cash, but he is watching for the setup to jump in on the short side for a scalp. It is always difficult to discern a viable signal on an FOMC day, but if the market were to weaken tomorrow, my trading account would enter a small initial short position in the market.