Trading the Energizer Bunny rally – Humble Student of the Markets

Mid-week market update: As regular readers are aware, I have been increasingly cautious about the equity outlook for the past few weeks as the market advanced. This has become the Energizer Bunny rally that keeps going beyond expectations. 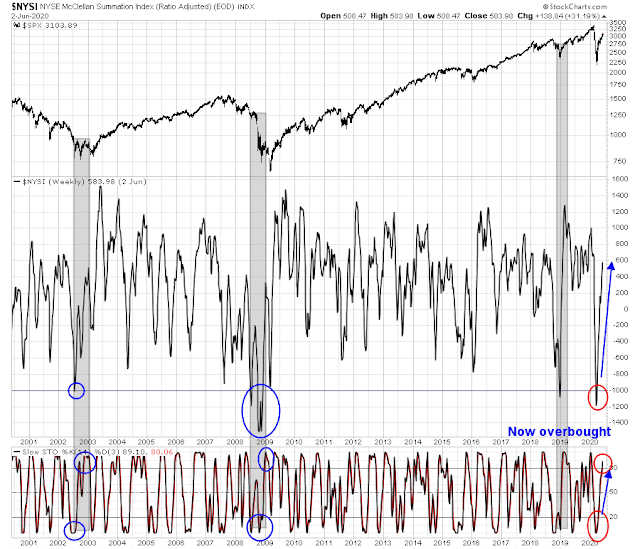 To be sure, past rebounds have seen the weekly stochastic become even more overbought. These conditions suggests that there may be one or two weeks of more upside on NYSI, this relief rally is running on borrowed time.

Here is the bull case for more upside, either on a tactical or sustained basis. First, equity risk appetite continues to be positive. The ratio of high beta to low volatility stocks is rising in the context of a relative uptrend. 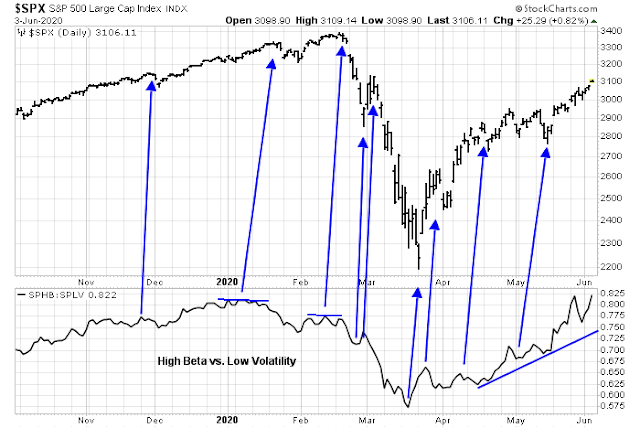 Price momentum has been impressive. Ryan Detrick of LPL Financial observed that this is the greatest 50-day equity market rally, and similar strong rallies have led to further strength in the past. The market recently staged upside breakouts through its 200 dma, and the strength may be indicative of a FOMO stampede.

Even as the FANG+ and NASDAQ stocks lose their momentum, market leadership has broadened to cyclical sectors and industries, indicating the expectation of an economic rebound. 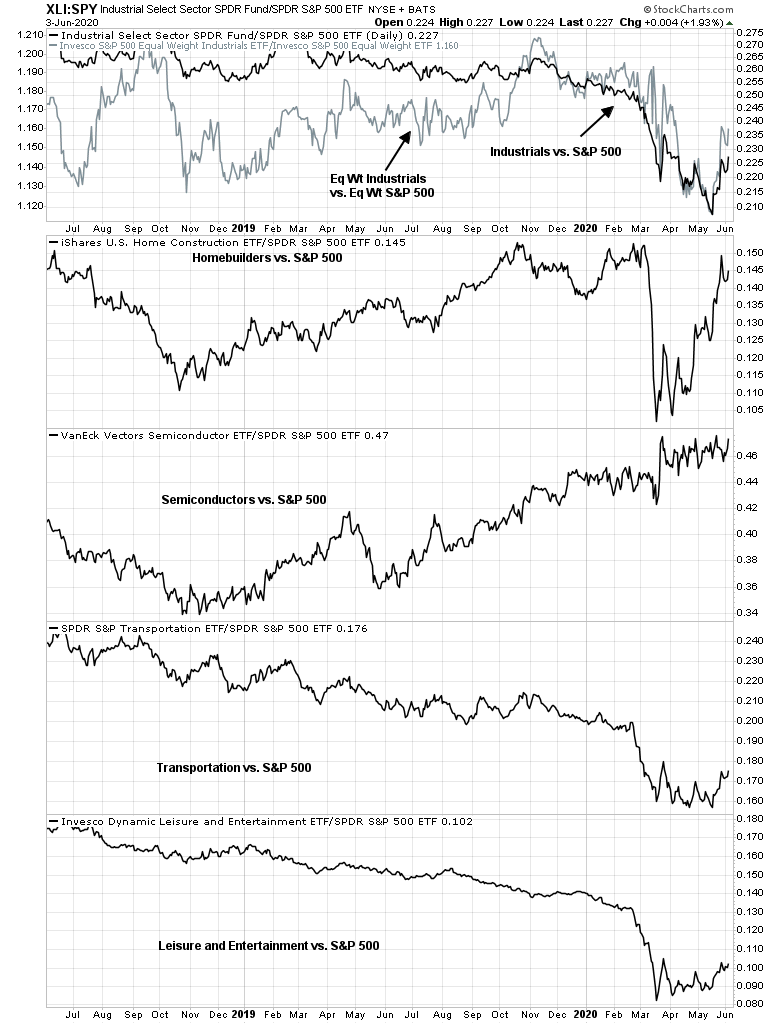 Small and microcaps have also been turning up in relative performance. 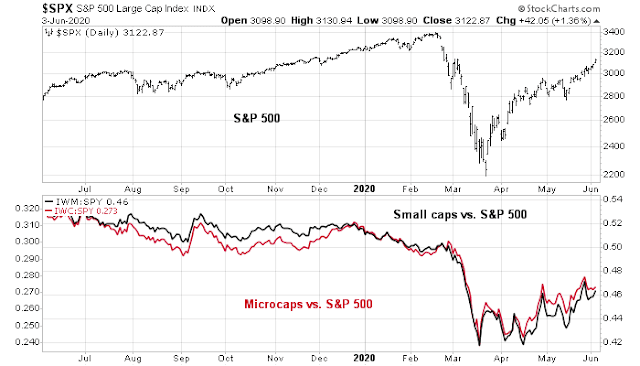 Here is the bear case. First, it seems that analysts are turning bullish to catch up with price. Helene Meisler has a pinned tweet that may fit the current environment well.

As an example, John Authers documented Goldman’s sanguine outlook, though admittedly the market is priced for perfection.

If next year’s earnings turn out to be in line with Goldman’s baseline forecasts, then the market is trading at a high but reasonable 18 times 2021 earnings. It is higher than that if the more bearish estimates from buy-side firms are right; and at an all-time high of 26, significantly above even the worst excesses of 2000, if the worst-case scenario is correct. So the market is plainly working on the assumption that things will turn out about as well as can reasonably be expected: 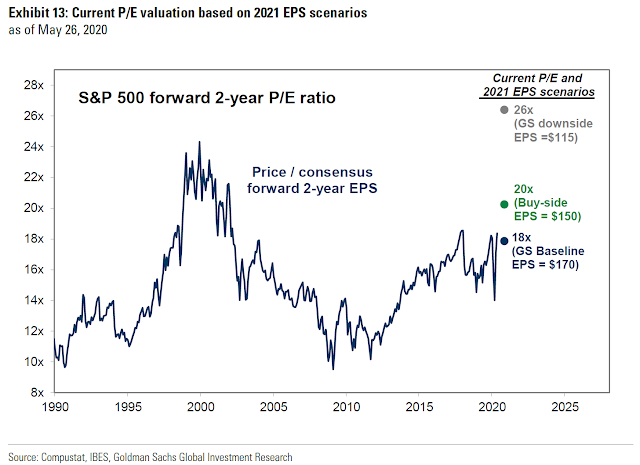 If any of the risks that I outlined in the past (see Brace for the second waves) were to appear, then it’s game over for the rosy outlook. These kinds of justifications seem to be a case of grasping at bullish straws.

John Authers also pointed out an anomaly in the cyclical and small cap rebound bullish thesis. If the market truly believes that the economic is turning up, then why are the stocks with good balance sheets beating the stocks with poor balance sheets? In a cyclical rebound, highly levered companies, some with zombie-like characteristics, should skyrocket because they behave like out the money call options on the economy. 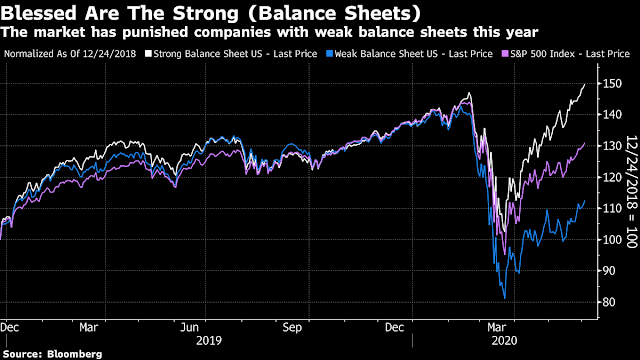 Price momentum effects may be starting to peter out. I had pointed out that the rally off the March bottom was mainly attributable to short covering (see A bull market with bearish characteristics), it was unclear what kind of market players are willing and able to take up the baton. Fast money and trend following Commodity Trading Advisers (CTAs) are now at their maximum long positioning in stocks. 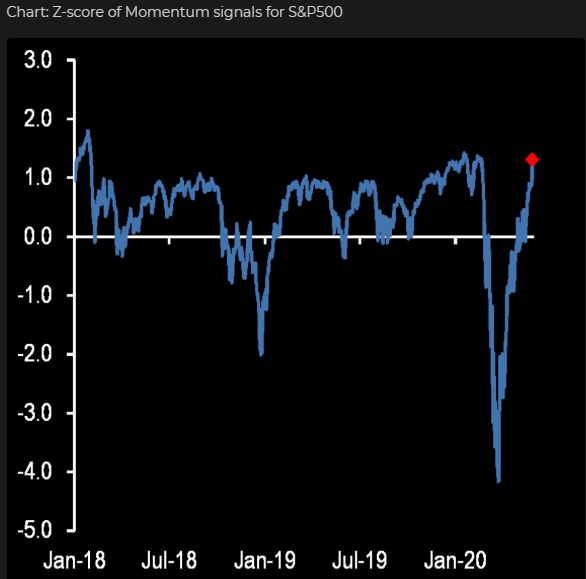 Who will buy next?

When do retail investors pull back?

We have all heard about the frenzied trading of naive retail traders entering the market. Jim Cramer observed that even small trader sentiment is becoming very frothy, which is a cautionary signal.

One clue came from a historian who studied how the rich reacted to the Black Death. So far, the main job losses have come from lower paying service jobs. Better educated workers have been largely insulated because they can work from home.

The coronavirus can infect anyone, but recent reporting has shown your socioeconomic status can play a big role, with a combination of job security, access to health care and mobility widening the gap in infection and mortality rates between rich and poor.

The wealthy work remotely and flee to resorts or pastoral second homes, while the urban poor are packed into small apartments and compelled to keep showing up to work.

Social reaction to the Black Death provides a rough model of what may happen today.

One key issue in “The Decameron” is how wealth and advantage can impair people’s abilities to empathize with the hardships of others. Boccaccio begins the forward with the proverb, “It is inherently human to show pity to those who are afflicted.” Yet in many of the tales he goes on to present characters who are sharply indifferent to the pain of others, blinded by their own drives and ambition.

People with sufficient savings to play the stock market today belong mainly to the class of educated workers. In this case, the adage that it’s a recession if your neighbor loses his job and a depression if you lose yours may ring especially true for the investor class. Sentiment may not break until we start to see widespread white collar job losses and salary cuts. Bloomberg Economics’ estimates of second wave job losses shows management jobs rank second in layoff potential. That may provide the catalyst for individual investors to de-risk because of their own employment conditions. 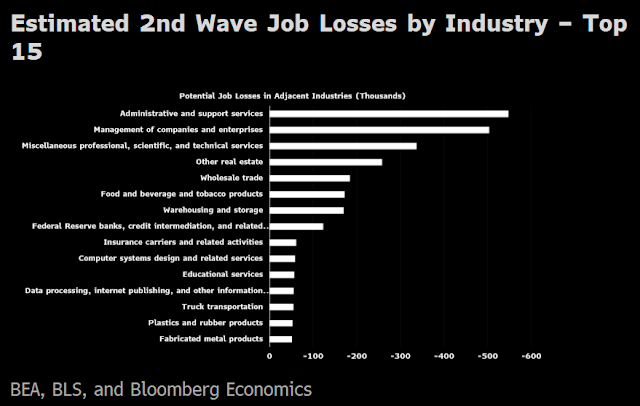 Analysis from the Leuthold Group provides some context as to why this is still a bear market. Leuthold had set out a criteria of five conditions for a cyclical market low, and the March 23 low met none of those conditions.

The Leuthold Group went on to observe that “the 30% surge off the low met 0-of-3 dynamics that usually accompany the first leg of a bull market”. In total, 0 for 8 is not exactly comforting for the bull case.

I interpret these conditions as a bear market rally, though short-term momentum may carry the market somewhat higher in the next one or two weeks. My base case scenario calls for a short-term peak, but investors should be prepared for rising downside risk afterwards. I have no idea how far the current FOMO rally can run, but my inner trader is standing aside because the intermediate term risk/reward is tilted bearishly.