Buy! The party is still going strongly – Humble Student of the Markets

Stock prices have been on a tear since the US election last November. While analysts have attributed the rally to a Trump effect, the chart below shows the SPX and international stocks, as measured by MSCI EAFE, during that period. Both asset classes have performed roughly in line with each other. This indicates the lack of a pronounced Trump effect as the outlook for non-US stocks should not be affected by the prospect of Trump tax cuts and deregulation. The main reason for equity strength was a broad based global growth recovery.

Since taking office, the Trump White House has been seized by legislative paralysis. Consider Exhibit A, the repeal failure of ACA, which was a major goal of candidate Trump. The new administration has struggled to find its footing in the business of governing. The Washington Post reported that, of the 553 positions requiring Senate confirmation, 478 have not even been chosen, such as the three vacant board seats at the Federal Reserve. CNN reported that Trump still has about 2000 vacancies to fill – and that includes the ones that do not require Senate confirmation.

To be sure, Trump stated in a recent interview with Fox News that he does not intend to fill “unnecessary” posts in an effort to cut down on government. For now, many parts of the US federal government is running on autopilot. However, with no ambassadors in place in South Korea, China, or Japan, and an unfilled post of the Assistant Secretary of State for East Asia, the recent crisis, or near-crisis, over North Korea highlights the vulnerabilities of a slimmed down government.

Global growth is alive and well

One of the principal drivers of stock prices is the earnings outlook, and the early indications from Q1 Earnings Season looks upbeat. The latest update from Factset shows that only 6% of SPX components have reported, but both the EPS and sales beat rates are above their 5-year historical averages (and that was before Thursday’s beats from major banks). More importantly, forward 12-month EPS continue to get revised upwards, which is reflective of Wall Street’s optimism (chart annotations are mine, data from Factset). 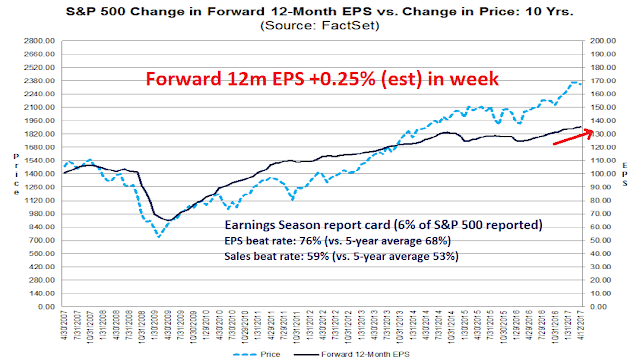 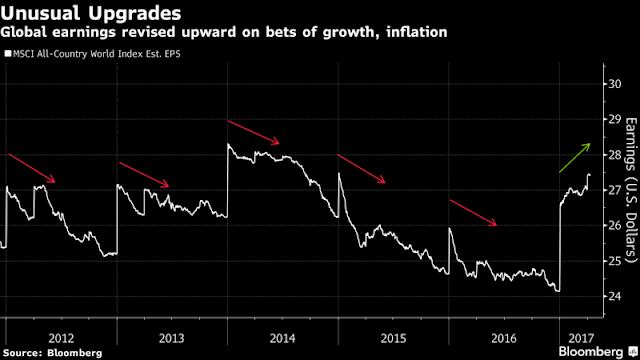 Here is further evidence of the global growth resurgence. Analysis from Factset shows that companies with more foreign exposure are expected to show better sales and earnings growth. 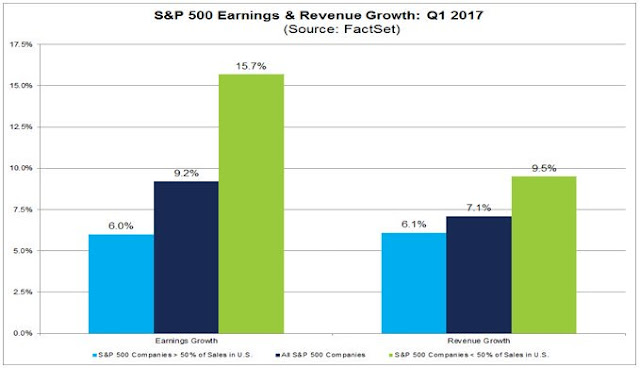 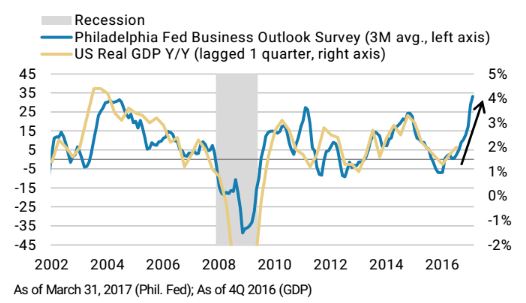 Growth is alive and well. The party is still going strongly.

If I told you that earnings estimates were rising, not just in the US but globally, and bond yields fell, what would you expect stock prices to do? Instead of rising, equity prices have been weakening. Even though the SPX is less than 3% off its all-time high, widespread fear has crept into the market.

The Trifecta Bottom Spotting Model flashed an exacta buy signal on Thursday, which is indicative of market panic. The chart below shows the signals from this model in the last three years, with exacta signals shown in blue and trifecta signals shown in red. In the past, such occurrences have generally marked low risk entry points on the long side. 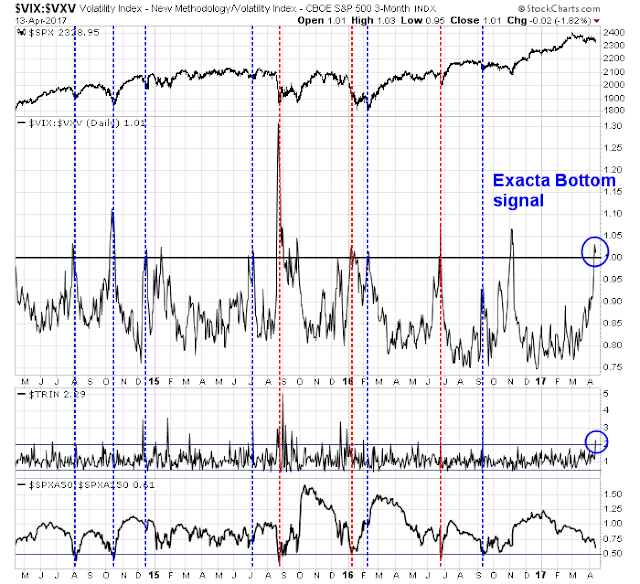 Last week, I wrote about the VIX Index rising above its upper Bollinger Band (BB), which indicated an oversold condition (see A capitulation bottom?). 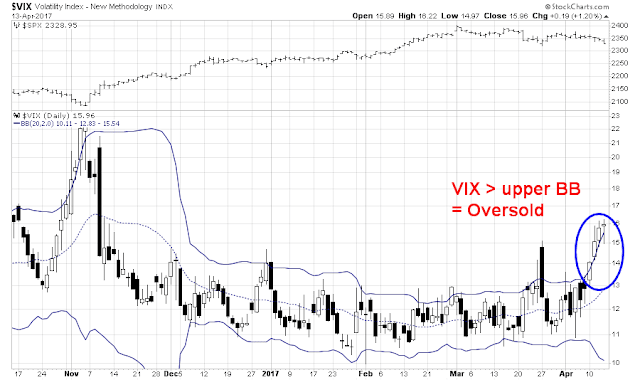 In fact, we have the unusual condition where the VIX Index has risen above its weekly upper BB. The chart below shows past episodes trading setups where VIX has risen above its upper BB (red line), and when mean reversion occurred (blue line). All buy signals have seen positive returns. 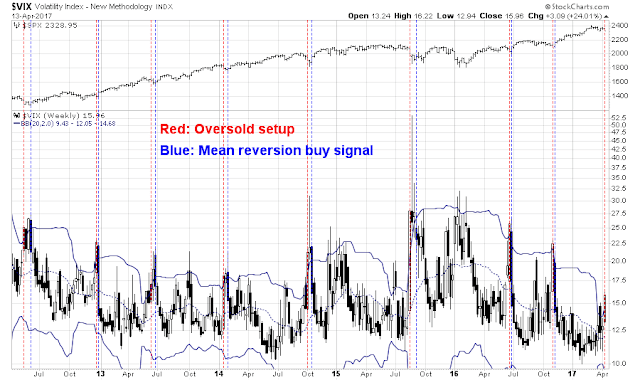 Thursday also saw a relatively rare condition where the CBOE equity-only put/call ratio spike to 0.96, which is indicative of high fear. 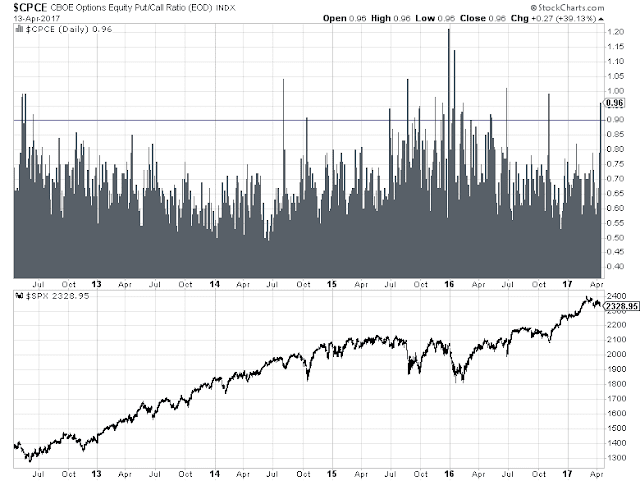 I went back to October 2003, which is when the CPCE data series began in my database. Past episodes of high CPCE levels and the daily VIX Index above its upper BB (N=18) have tended to resolve bullishly. 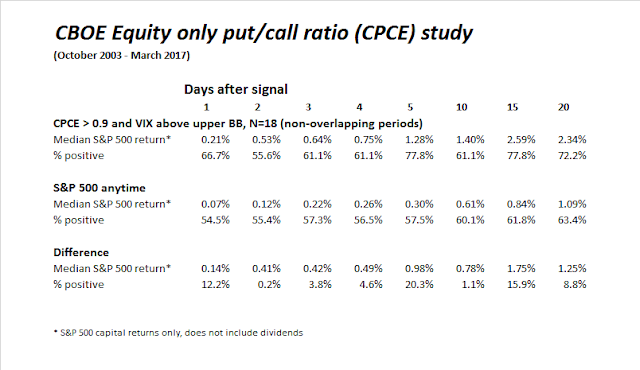 If evidence of excessive fear isn’t enough for the bulls, the market is entering a period of positive seasonality. Ryan Detrick pointed out that the second half of April tends to be favorable for stock prices and the market just reached the seasonal nadir on April 14. 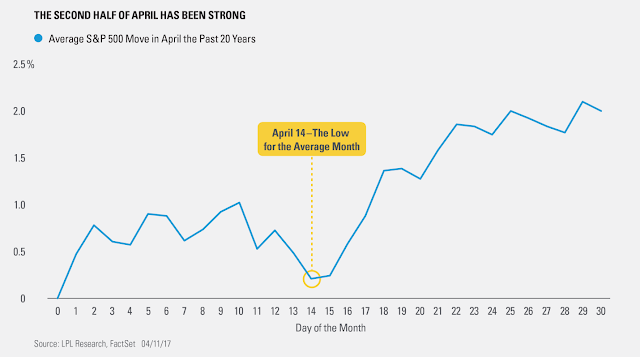 In addition, next week is option expiry week. Rob Hanna at Quantifiable Edges observed that April OpEx tends to be highly favorable for stock prices.

The week ahead: BTFD

Looking to the week ahead, the market is obviously very oversold and due for a relief rally. Breadth metrics from Index Indicators are showing oversold conditions consistent with trading bottoms. 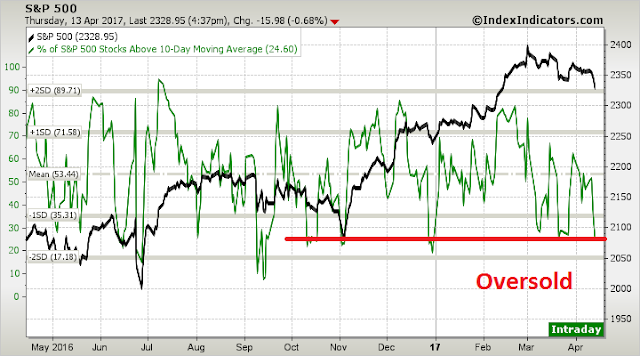 However, oversold markets can get more oversold. There are hints that there may be further short-term downside early in the week before a durable bottom is reached. Firstly, past episodes of CPCE spikes have seen 1-2 days of downside follow through before the actual trading bottom (see above CPCE chart). As well, the Fear and Greed Index has not fallen to sub-20 levels where the market has bottomed in the past. The current reading of 25 is close, but the market may need a final flush. 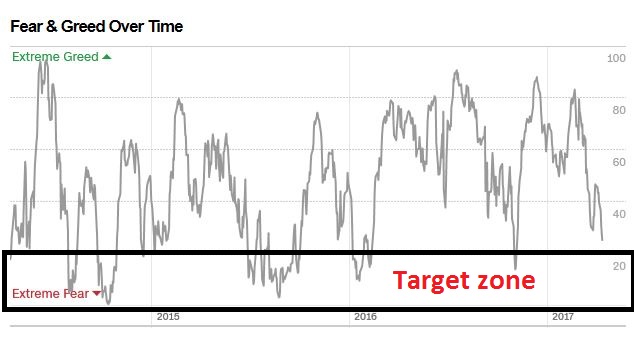 Market nervousness may not necessarily subside next week because of the uncertainties posed by the upcoming first round of French elections on April 24. As the chart below shows, hedging costs for the Euro STOXX 50 has recently spiked. 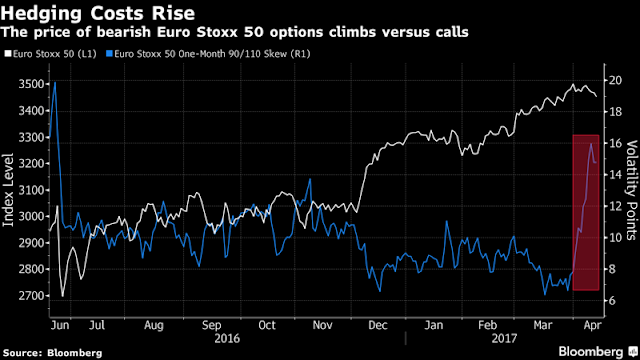 My inner investor remains bullishly positioned. He is inwardly smiling at the silliness of the emotional extremes when the market has only corrected by 3%.

My inner trader remains long equities. Should the market fall further, he is prepared to take the unusual step of going all-in on the long side.

7 thoughts on “Buy! The party is still going strongly”