The Art of the Deal, North Korean edition – Humble Student of the Markets

Can we stop freaking out over the prospect of an imminent war over North Korean nuclear tests? After the hoopla over the North Korean announcement to expect a major event on or before their “Day of the Sun” on April 15, there was much speculation that they would conduct another nuclear test. Trump responded with the assertion that if China wouldn’t help, he would deal with North Korea by himself. The aircraft carrier USS Carl Vinson was re-routed from a planned exercise with Australia to the North Pacific.

The geopolitical tensions is fizzling out like a wet firecracker. The biggest splash was the display of some submarine launched ballistic missiles that were mounted on trucks in the annual parade. Afterwards, North Korea tried a missile test, but it blew up shortly after launch. Even Zero Hedge sounded disappointed. As it turns out, this account from South Korean media shows that even the re-deployment of the USS Carl Vinson was mostly for show:

Japanese analysts believe that the USS Carl Vinson’s change of course is designed to fill a strategic vacuum in US forces at the present moment. “Since the nuclear aircraft carrier USS Ronald Reagan, which is based at Yokosuka Naval Base [in Japan], is inactive from January to April because of inspections and repairs, [the USS Carl Vinson] was deployed to fill a gap [in the West Pacific region],” wrote Tetsuro Kosaka, a staff writer for the Nihon Keizai Shinbun and an expert on Japanese security, in a column for the newspaper on Apr. 11. Though the USS Carl Vinson is in charge of the East Pacific, the fact that it is heading toward the Korean Peninsula (located in the West Pacific) cannot be regarded as an increased American military presence in the region, he argued.

In addition, the announcement that VP Mike Pence was to begin on the weekend a 10-day Asian tour with stops in South Korea, Japan, Indonesia, and Australia, it was evident that the US was unlikely to start unilateral military action without consulting regional allies. On Sunday, Donald Trump also tweeted that China was cooperating to defuse the North Korean problem.

Preventing Pyongyang from carrying out its sixth nuclear test is the top priority at the moment. North Korea should not think that it has once again broken through the pressure from the global community. If it continues to go its own way, sanctions from the international community will become more stringent and the US will seriously consider launching military strikes against it. If conflict does break out, Pyongyang will suffer the most.

As geopolitical risk premiums recede and the South Korean KOSPI rose 0.51% on Monday, it is well worth considering how Donald Trump, who considers himself to be a master dealmaker, can find an accommodation with North Korea. Unfortunately, there aren’t any good deals to be found.

Consider the options that the current and past American presidents have faced in neutralizing the North Korean nuclear threat.

Oh, PUH-LEEZ! McMaster is intelligent enough to recognize the tactical and strategic hurdles in the way of an attack.

Remember the calls to bomb Iran so that they couldn’t build nukes? Bombing Iran would not just be a pinprick raid, but a massive and concerted air campaign that would have lasted a week or more. A North Korean strike would roughly be on the same scale, but in a much compressed time frame. That’s because North Korean troops have massed artillery within range of Seoul. The onset of hostility would see an artillery barrage that would leave horrific South Korean civilian casualties. Does the US have sufficient air assets to suppress all of the artillery and hit the nuclear and missile launch sites all at the same time? I don’t know, but it would not be easy.

Last week, I had privately voiced my skepticism that the rising tensions from the deployment of a carrier task force would lead to a shooting war. One measly carrier group was not enough to start an attack. In addition to the B-52s based in Guam, the US needed an armada, which was nowhere in evidence.

US and South Korean commanders would also have to consider the Chinese reaction. China considers North Korea as a buffer state, and she would treat the presence of unfriendly troops on her border seriously. The most recent bout of tensions saw the deployment of 150,000 Chinese troops on the North Korean border and the entire military region was put on a state of high alert (via Huffington Post).

Notwithstanding the tactical issues of an attack on North Korea, the bigger strategic question would be the geopolitical endgame. Supposing an attack successfully took down the North Korean regime, what happens next? The Chinese would totally freak out over the prospect of unfriendly troops on their border. An attack therefore risks another Korean War and a confrontation with China, which is a real nuclear power with real ICBMs aimed at the United States.

Given sufficient warning, China could even opt to station troops in North Korea as a tripwire, or human shields. Such a tactic would mirror American actions at the beginning of the Cold War. US troops were stationed in Europe as a warning to the Soviet Union. Invade, and risk a nuclear confrontation with America.

Another long-term strategic option is Korean re-unification. Even if such a dream were to be achieved, in reality it would be the economic takeover of the North by South Korea. Bloomberg recently provided analysis showing the vast economic gap between the two countries.

From an economic viewpoint, the new Korea would be plunged into instant recession. German re-unification took a huge toll on the German economy. In that case, the economic gap was more narrow, and Germany had the support of her EU partners in that undertaking.

As well, China would not react well to the presence of South Korean troops, along with those of her American allies, on her border (see above). Therefore any effort to re-unify the two Koreas faces serious geopolitical constraints.

The Finlandization of South Korea

Since China seeks a buffer state on her border, one solution to Korean re-unification would be the Finlandization of either South Korea or the re-unified Korea.

For readers who are unfamiliar the term “Finlandization”, Finland fought a brutal Winter War with the Soviets in 1939-40. Today, even though Finland is part of the EU and eurozone, it is neutral and it has never been a member of NATO. This way, Helsinki avoided antagonizing the Soviet Union, and, today, Russia.

While the Finlandization process may make sense from an economic viewpoint, the biggest geopolitical loser of such a development would be the United States. If South Korea were to become neutral, it would have to sever current military alliances. American troops would have to be withdrawn from Korean soil. As China is South Korea’s biggest trading partner, a neutral South Korea or re-unified Korea would naturally be drawn into the Chinese orbit. Years from now, American historians might ask the question, “Who lost Korea?”

The answer would be Donald Trump. It’s highly unlikely that Trump the dealmaker would acquiesce to that deal.

The Finlandization of North Korea

Another solution might be a Chinese directed replacement of the current North Korean regime with a technocratic government. The new North Korea could then proceed down the Deng Xiaopeng “it is glorious to be rich” road of economic transformation. North Korea could disarm and become neutral, in the manner of Finland, which would also prompt South Korea to dial down its military strength and possibly lead to the withdrawal of American troops.

Ummm, who bells the cat?

Kim Jong-un is unlikely to go quietly into the night. He has consolidated power and built a political apparatus that has suppressed all dissent. There is no political opposition in North Korea, not even Chinese leaning ones. The prospect of the Finlandization of North Korea is highly unlikely.

In conclusion, I have outlined the major endgames for the North Korean problem. Donald Trump, the self-fashioned master dealmaker, is faced with an unpalatable choice of options. If he could disarm North Korea with a creative solution, then he would be deserving of a Nobel Peace Prize,

There is, of course, the outside-the-box solution of North Korea to take the capitalist road to revitalize their economy. When the Soviet Union fell apart, Dean LeBaron, the founder of my former employer Batterymarch Financial Management, quipped that the government of the day should embrace the free market by selling off their nuclear arsenal. Kim JongUn could do the same thing. Maybe he could get help from those free market economists at the University of Chicago on how to conduct auctions without the interference of heavy handed government regulations. 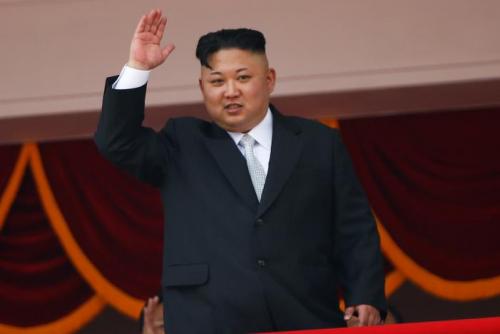 Now that would be the “deal” that Donald Trump could not resist participating in.

4 thoughts on “The Art of the Deal, North Korean edition”