A capitulation bottom? – Humble Student of the Markets

Mid-week market update: In my weekend post (see Buy the dip!), I wrote that despite my tactical bullishness, “traders need to allow for a brief rally, followed by a sharp drop to a washout low before this shallow correction is over”. We are finally seeing signs of an oversold market and a short-term capitulation.

There were a number of signs of a short-term bottom. On Monday, the VIX Index closed above its upper Bollinger Band (BB), indicating an oversold condition for the market (see Three bottom spotting techniques for traders). As well, the SPX has been testing support located at its 50 day moving average (dma) in the last two days. 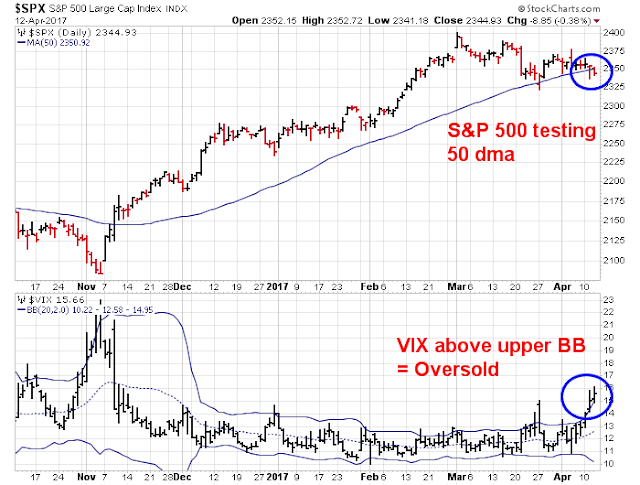 Just because a market is oversold doesn’t mean that it can’t go down further. Indeed, a study of past occasions where the VIX Index had risen above its upper BB indicated that it tended to continue to decline. As the results of the study below indicates, negative price momentum tends to start reversing itself after one day the VIX Index rises above its upper BB. Wednesday is day 1. 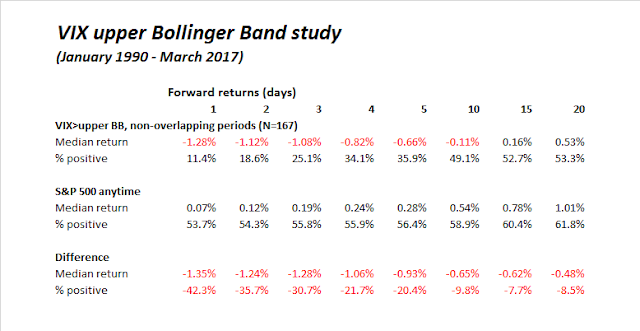 Once VIX mean reverts and falls below its upper BB, returns have historically seen an upward bias.. 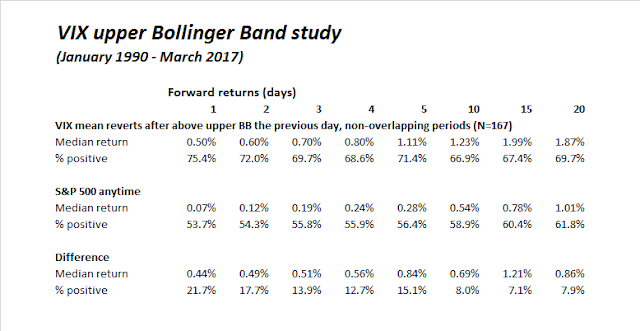 Watch the VIX Index for the mean reversion move.

A near exacta buy signal

There are additional signs of market panic. My Trifecta Bottom Spotting Model (click link for a full explanation of the model) reached a near oversold reading on Tuesday. As a reminder, the Trifecta Bottom Spotting Model uses the following three components to determine an oversold market condition: inversion of the VIX forward curve; TRIN above 2; and a reading of below 0.50 on the intermediate term overbought/oversold model – all within three days of each other.

While the OBOS model is far from an oversold reading, the Trifecta Model hit a “qualified” exacta buy signal, which triggered two of the components. The VIX forward curve inverted today. While TRIN did not rise above 2, TRINQ, which is TRIN for NASDAQ stocks, went over 2 on Tuesday on an intraday basis. TRIN and TRINQ readings of over 2 are often reflective of price insensitive selling that are typical of forced “margin clerk” market sales. 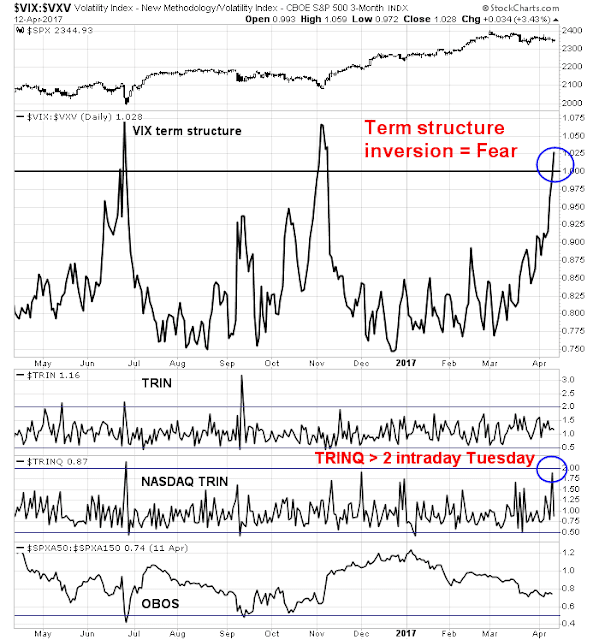 Are those conditions enough to call this a capitulation bottom, or a market washout? I don’t know, but the combination of the technical test of the 50 dma, the oversold condition flashed by the VIX Index, and the near exacta buy signal make the answer a “qualified yes”.

7 thoughts on “A capitulation bottom?”