Buy the dip! – Humble Student of the Markets 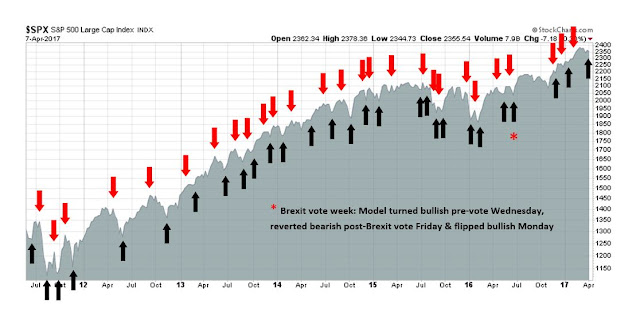 Sometime you don`t get the perfect signal. I had been watching for signs of an oversold extreme before covering my short positions and buying, but none of my tactical three bottom spotting models had flashed a buy signal yet (see Three bottom spotting techniques for traders). 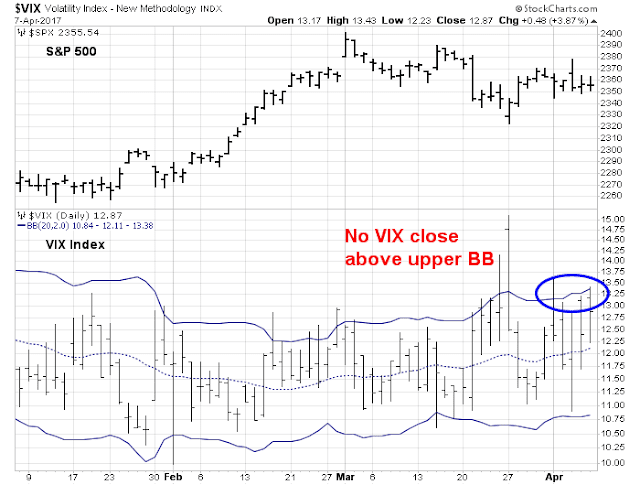 Nevertheless, a combination of macro, fundamental, and sentiment models have turned sufficiently bullish for me to call an end to the current bout of minor stock market weakness. At a minimum, downside risk is likely to be low at current levels. 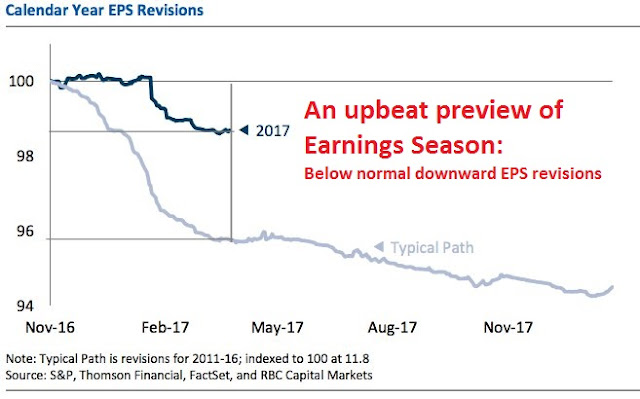 The triumph of “soft” data

For the past few weeks, analysts have observed a bifurcation between the soft (forecast) macro data and the hard (reported) data. The soft data had run far ahead of the hard numbers, and the gap was at or near historical highs. Many, myself included, believed that the forecasts were overly optimistic and were bound to turn down, which was bearish for the growth outlook. 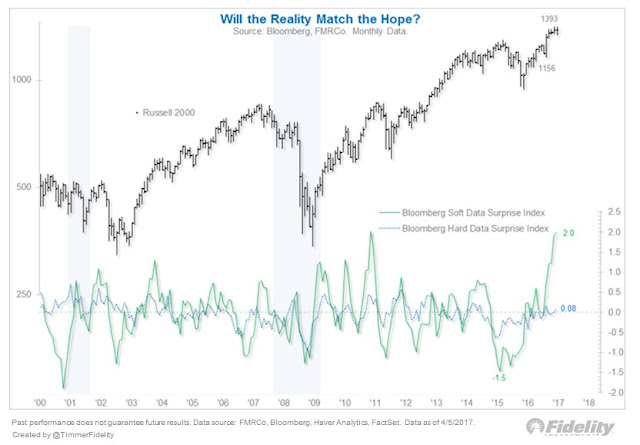 Gavyn Davies recently featured an analysis of Fulcrum nowcasts of economic growth. The forecast called for extremely strong growth rates, especially in the developed economies. Much of the strength was derived from soft data. 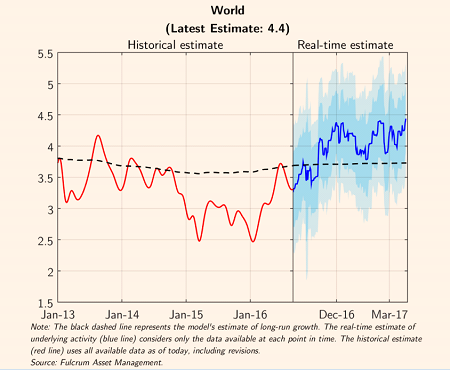 Davies concluded that the buoyancy of the US soft data forecasts isn’t just an effect of the enthusiasm of Trump supporters, “The synchronised nature of the upswing in so many economies increases our confidence that the buoyancy of US growth is not just a consequence of fake survey news in the American economy.”

Liz Ann Sonders at Charles Schwab came to a similar bullish conclusion, though she acknowledged that the two data series tend to converge with soft data weakness and hard data strength:

It’s been our contention that the inevitable narrowing of the spread between the soft and hard data would likely be in both directions; i.e., confidence measures would likely ease, while the hard data would play at least a little catch up. According to Bespoke Investment Group (BIG), when soft data outperforms, hard data usually plays catch up in the following three and six months; while soft data almost always declines. With regards to the stock market, average and median returns have been skewed to the positive over these time frames as well.

Indeed, Jeff Gundlach observed that the global economic is experiencing one of the most synchronized upturn in years (via Business Insider). 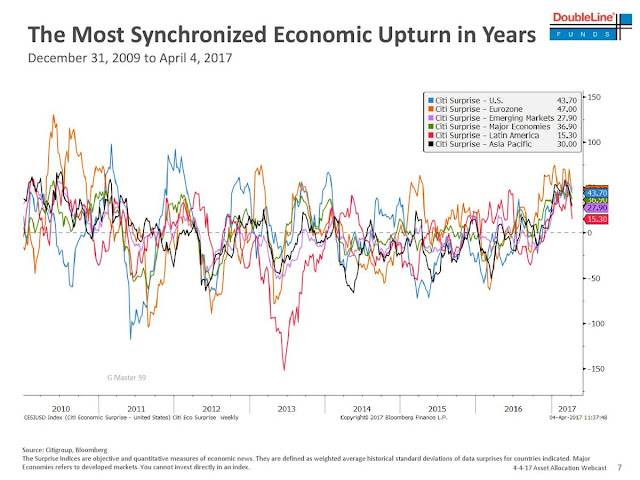 The global scope of the growth surge is good news for Europe. With eurozone business confidence rising… 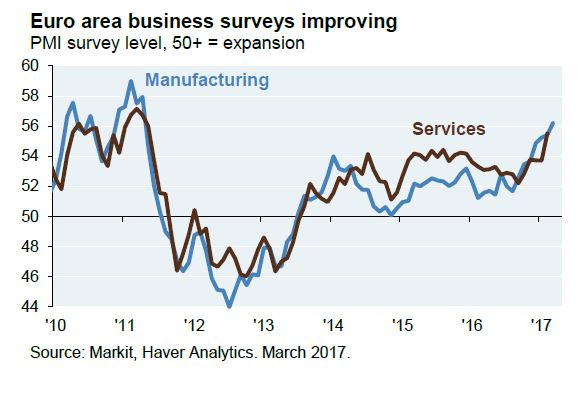 The upturn is positive for eurozone companies because of their high operating leverage. 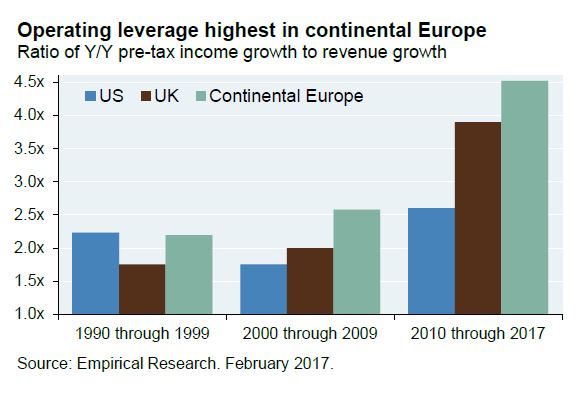 In the US, the latest update from Factset shows that forward 12-month EPS is rising, which reflects Wall Street’s continued optimism about earnings growth, a key driver of stock prices. 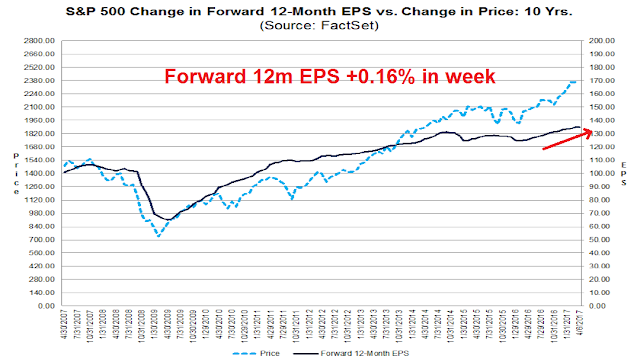 What about the NFP miss?

On the other hand, Friday’s March Employment Report was a shocker. The headline Non-Farm Payroll (NFP) came in at 89K, which was well short of market expectations of 175K. Looking through the internals, however, the March report presented a solid picture of growth.

First of all, much of the disappointment appeared to have been weather related. This chart of construction employment showed a dramatic slowdown in March, which was likely weather related and should reverse itself in the coming months. 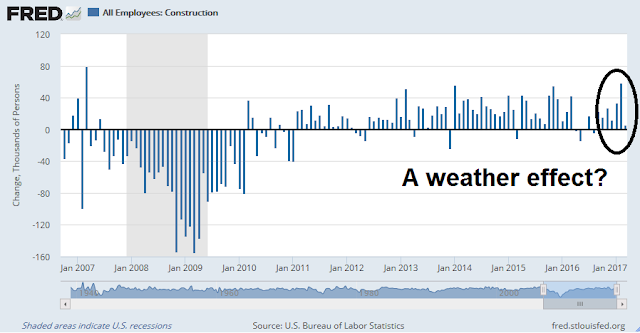 More importantly, temporary jobs were strong. In the past, temporary employment (blue line) has peaked out before headline NFP (red line). 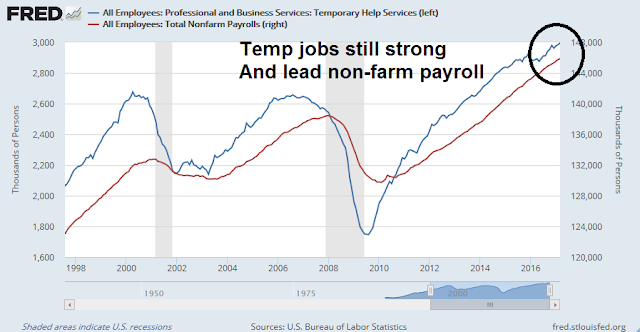 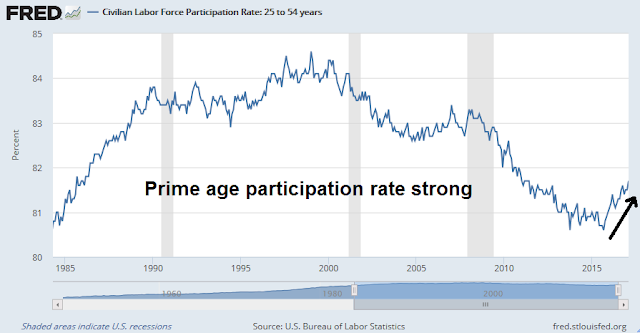 Finally, the unemployment rate fell to a new cycle low at 4.5%. 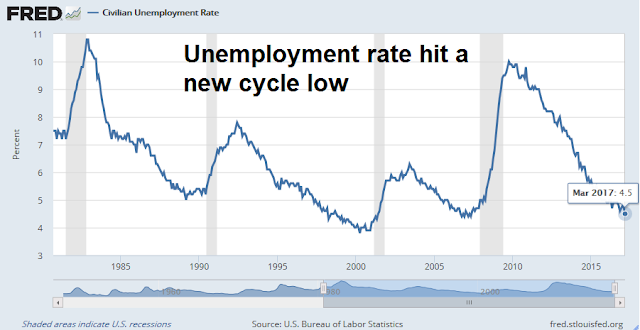 Despite the headline NFP miss, I interpret this report as a solid report. These are all signs of robust economic growth.

In addition to the strong macro and fundamental backdrop, I am also seeing signs of bearish sentiment extremes which led me to change the trading model from a “sell” to a “buy” last week.

This 10-year chart of Rydex cash flows show that Rydex investors had moved to a bearish extreme. In the past, the market had not necessarily rallied immediately when readings were this low, but saw limited downside during such episodes. 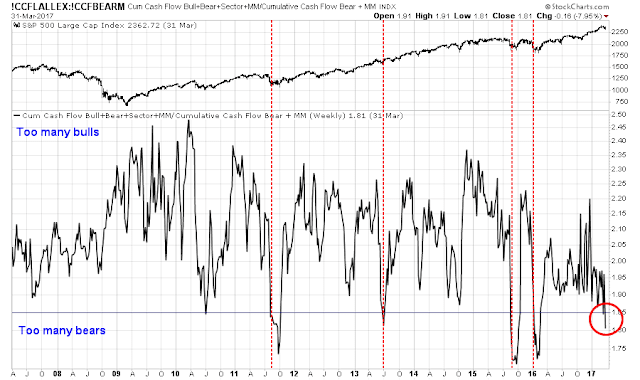 In addition, this chart of NAAIM exposure indicated that RIAs seemed to have panicked. In the past, NAAIM readings that fall to their lower Bollinger Bands have been good buy signals. Unlike the Rydex buy signals above that denote minimal downside risk, past NAAIM buy signals have seen the market rise. 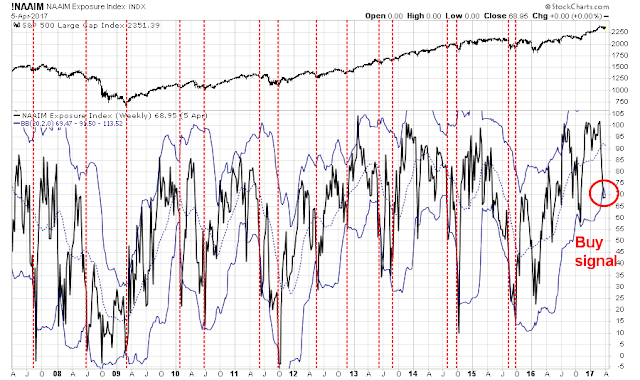 Despite the presence of all of these upbeat intermediate term factors, bulls should curb their enthusiasm as a number of key risks remain. First of all, the Atlanta Fed’s GDPNow nowcast of Q1 growth is coming in at a dismal 0.6%. The possibility of a negative surprise is still present. The big test for the stock market will be Q1 earnings season, which is just getting under way.

As well, the yield curve is flattening, which is the bond market’s way of telling us that it expects lower economic growth.

There may also be some unfinished business that the market needs to attend to from a sentiment viewpoint. The Fear and Greed Index did not reach oversold levels consistent with past bottoms. While every market is different, and we have already seen sentiment extremes from Rydex and NAAIM data, traders need to allow for a brief rally, followed by a sharp drop to a washout low before this shallow correction is over. 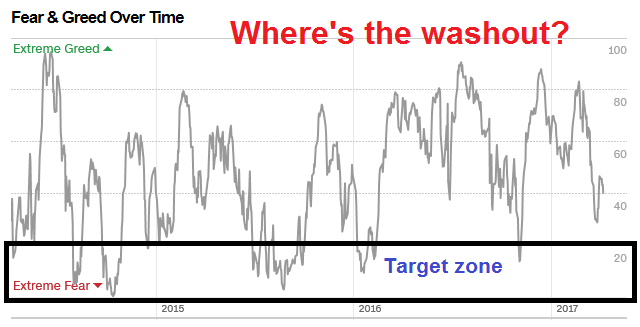 To be sure, the NYSE McClellan Summation Index (NYSI) is showing signs that it is undergoing a bottom process. Any pullback that produces a capitulation low is likely to be shallow. 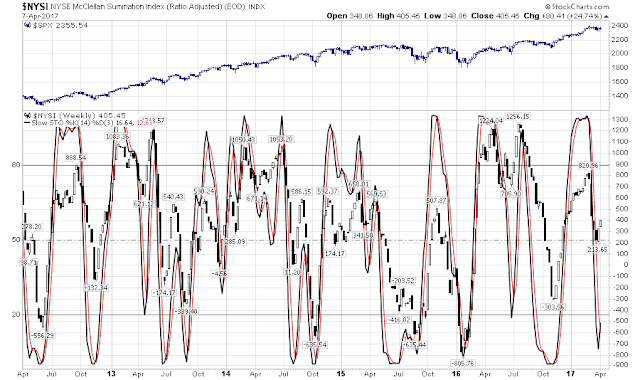 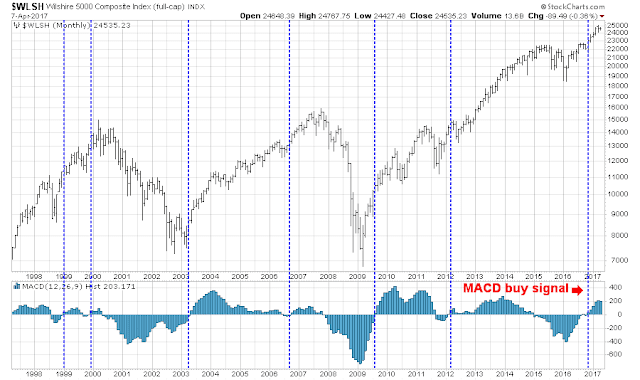 He believes that the SPX point and figure price target of over 2500 is very achievable this year. 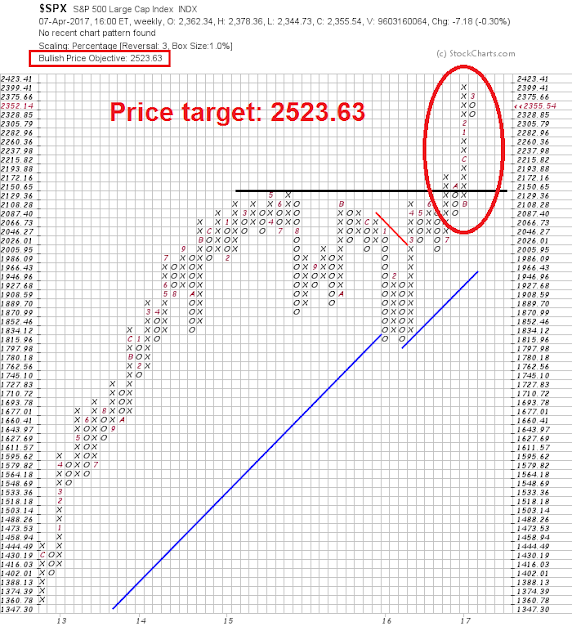 My inner trader flipped from short to long last week. He now has small initial long positions in SPX and NDX, which has been the recent leadership in the market.