The miracle of Europe – Humble Student of the Markets

Here in Canada, we are observing the 100 year commemoration of the participation of Canadian troops in the Battle of Vimy Ridge. While the Canadian Corp achieved its objectives of capturing the ridge, it was a typical battle of the First World War that left enormous casualties for both sides. 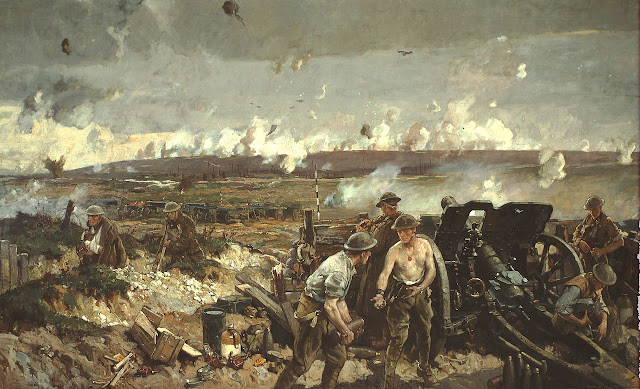 After the horrific human carnage of the First and Second World Wars, western Europe formed the European Coal and Steel Community (ECSC), which led to the European Economic Community (EEC). Thus the EU was born.

The political intent of the union was to bind France and Germany so tightly together that another major European conflict could not happen again. Despite the setback provided by Brexit, those political intentions have succeeded.

Lessons from the Gibraltar affair

Then we had the Gibraltar affair. For readers who hadn’t been paying attention, here is the account from Vanity Fair:

Until a week ago, 30,000 Gibraltans were quietly enjoying the best of both worlds, soaking up the Spanish sun while strolling past red phone boxes and dining out on fish and chips. Then Theresa May neglected to mention the British-ruled rock in her Article 50 letter, and the E.U. gave Spain the right to veto any Brexit deal made if it did not agree with arrangements made around the Rock. The situation descended into chaos. Speaking on live television, errant Tory Lord Howard declared possible war on Spain. Aboard a flight from Saudi Arabia, Theresa May laughed tightly and, quoting Winston Churchill, declared the situation more “jaw jaw” than “war war.” Back in Europe, her Navy raucously chased a Spanish ship out of British waters.

Sending the Royal Navy to defend Gibraltar? Is this the seed of another war in Europe?

Don’t be silly. Even as The Sun, which is a newspaper that has been staunchly anti-Europe in editorial tone, broadcast its Spanish antipathy on its front pages, it was also advertising £15 holidays in Spain at the same time. 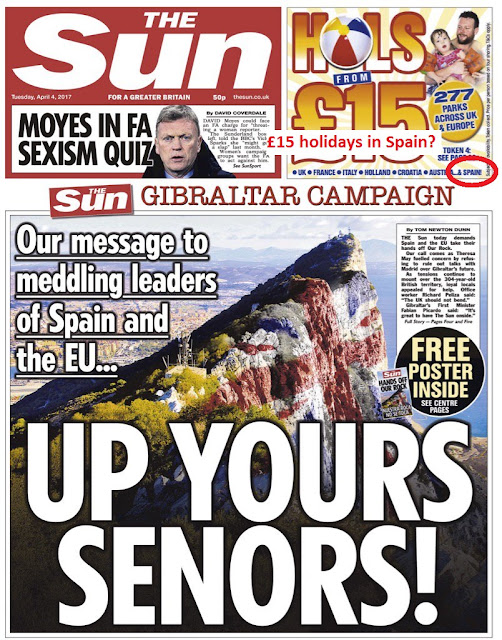 Jaw-jaw. Not war-war. Here are the results of a recent European poll that asked “would you fight for your country?” (via onlmaps). 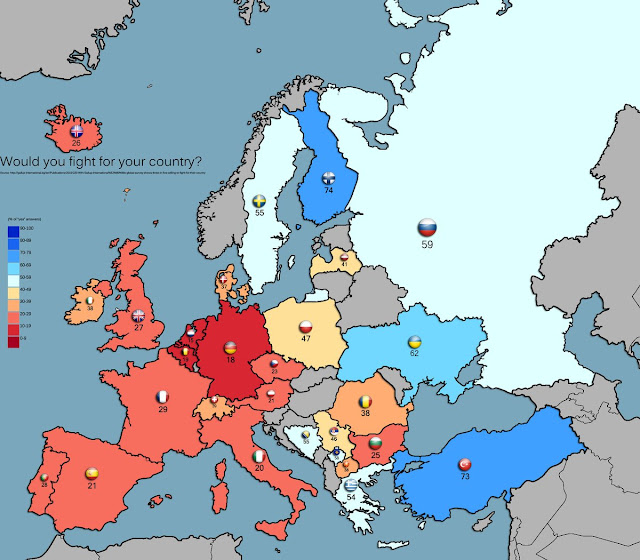 That’s the miracle of Europe, and the EU. It has traded endless meetings over Brexit and Greek debt for millions of war dead.

Lest we forget. (Now, back to your regular programming).

4 thoughts on “The miracle of Europe”