The Trifecta Bottom Spotting Model – Humble Student of the Markets

My Trifecta Bottom Spotting Model has been uncanny at spotting short-term market bottoms in the last few years. Since December 2010, the model has flashed eight buy signals and it has been correct seven out of eight times, or 87.5%. The chart below depicts the successful buy signals of this model by the blue vertical lines and the one early signal in red. For readers who want to follow along at home, here is a link to a real-time chart of the Trifecta Bottom Spotting Model. 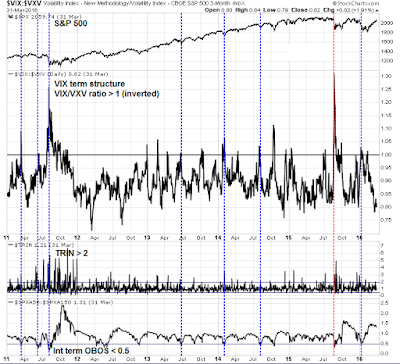 In constructing the Trifecta Bottom Spotting Model, I rely on three uncorrelated indicators that tell me whether the stock market is oversold:

None of these indicators, by themselves, are perfect. However, when I combine them together, they rarely flash simultaneous oversold and excessive fear conditions all at the same time. That’s why the combination of the three has been uncanny at spotting short and intermediate term bottoms, or at least signal that the short-term downside risk is limited.

If the combination of three indicators are virtually surefire ways of spotting bottoms, what about two out of the three? I call these conditions hitting the exacta – and the results are pretty good too. The chart below shows the exacta signals since December 2010, the same study period as the Trifecta Model, and the successful signals were marked by the vertical blue lines and unsuccessful ones by red lines. For obvious reasons, there were far more exacta signals than trifecta signals. Nevertheless, the success rate of the Exacta buy signals was excellent at 86.7%, which was roughly equivalent to the Trifecta success rate of 87.5%. 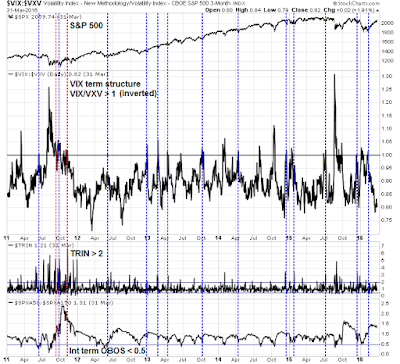 I would add that traders need to apply some common sense in distinguishing between an Exacta buy signal and a developing Trifecta buy signal. In virtually all cases, Exacta signals occur when the intermediate term overbought/oversold model is so far away from the 0.50 oversold zone that a Trifecta signal will not occur. There were rare occasions when the VIX term structure refused to invert and flash a fear signal, however.

When does the model fail?

While the Exacta and Trifecta Bottom Spotting Model has shown an uncanny record at spotting bottoms, no model is perfect and traders need to understand what makes a model tick and be prepared for conditions when it fails.

The Exacta and Trifecta Bottom Spotting Models are in essence oversold indicators. When they flash a buy signal, the market is oversold. As any good trader knows, oversold markets can get even more oversold. This model will fail when downward price momentum becomes overwhelming, just as it did during the market correction of September 2015 and the bear market of 2008-09. Therefore I recommend that traders apply this model judiciously by combining it with other analystical insights to ensure that the stock market is not encountering conditions where prices are cascading downwards
for macro-economic, fundamental or technical reasons.

As a reminder, here is a link to a real-time chart of the Trifecta Bottom Spotting Model for readers who want to follow along at home.

If you found this report to be useful, visit us at here to see the track record of market calls and all the other different ways we use to analyze markets.