The cloudy side of Trump – Humble Student of the Markets

Is the Trump honeymoon over?

Bloomberg had a marvelous article that captures the market’s mood right now. It is entitled “The sunny side of Trump: There’s reason for short-term optimism. Then he has to deal with his policy contradictions”. 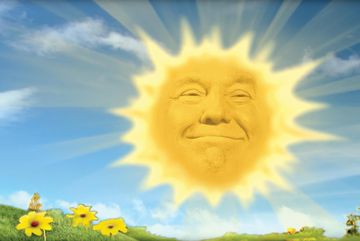 How long will this honeymoon last? For American business, the positive scenario is that Trump appoints sensible people, matures in office, and puts most of his considerable energy into the pro-growth parts of his agenda. The negative scenario is that he goes back to being the inciter who flew off the Twitter handle so much during the campaign that his people temporarily seized control of his account.

The bull case, which I laid out two weeks ago (see How Trumponomics can push the SP 500 to 2500+), is well known. Since the election, the stock market has embraced the prospect of a global cyclical upturn, anticipated fiscal stimulus, and buyback gains from a tax holiday fueled repatriation of offshore corporate cash. I went on to outline the bear case as the second part of my series the following week (see The bear case: How Trumponomics keeps me awake at night).

As Inauguration Day approaches, acts such as the appointment of Peter “Death by China” Navarro as trade czar has begun to unnerve the bulls. Market psychology is starting to turn from greed to fear. Concerns are rising that new Trump edicts may see parallels to this scene from Woody Allen`s 1971 comedy, Bananas (click this link if the video is not visible).

To be sure, bullish sentiment has surged in the short-term. Stock prices may have run ahead of themselves and a corrective period is likely. The bigger question is how will the bull and bear case resolve themselves in the longer term? I address that question this week with a scenario analysis that has some surprising results.

The bulls are back in town

There are numerous signs that the market sentiment has gotten too bullish too fast. Business Insider recently observed that Barron’s couldn’t find any strategists who thought that stock prices would fall in 2017. Bloomberg pointed out that range in Street strategists’ price targets have narrowed, as part of a herding effect. 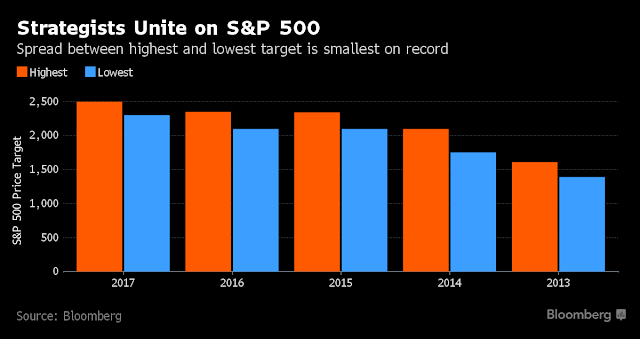 Composite metrics of investor sentiment, like this one from Sentiment Trader, are at a bullish extreme. That’s contrarian bearish. 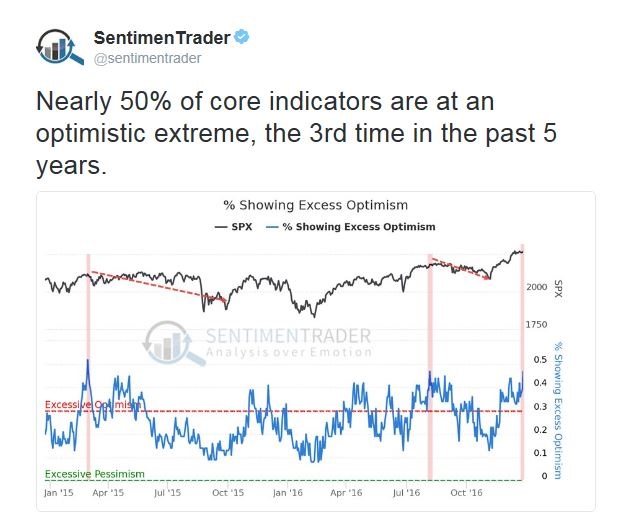 This analysis from Ned Davis Research came to a similar conclusion. It’s time for the market to pull back or consolidate its gains. 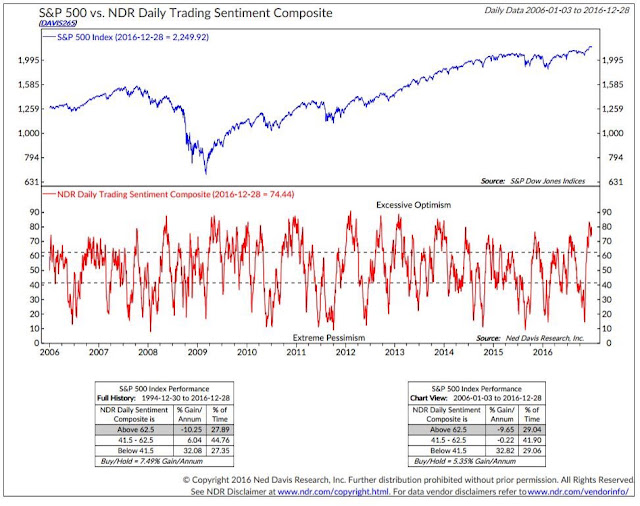 Finally, you can tell that market psychology has shifted by the tone of the tweets from a veteran WSJ reporter.

Hmmm, what happened after the Hoover election in 1929?

Assessing the bull and bear cases

I have already explained the bull case (see How Trumponomics can push the SP 500 to 2500+). The bear case rests mainly on disappointment in the implementation of Trump’s programs, or possible missteps by the new team on the geopolitical and trade fronts (see The bear case: How Trumponomics keeps me awake at night).

Here is the bear case in some context. I put the following question to a number of Trump supporters who are bullish on stocks and the economy. If you are so convinced that Trump will make America great again, then at what interest rate would you lend him money? What would it take to turn you from an equity investor into a debt investor?

An unscientific Twitter poll gave me some clues. As much as Trump supporters like his approach, few are willing to lend him money at current market rates.

If rates have to rise by 1-2% under those circumstances, what does that mean for equity valuations? Let’s do some quick, back of the envelope calculations. Data from Factset shows that the SP 500 trailing 12-month P/E ratio to be 20.6, which translates into an earnings yield of 4.9%. When I compare that figure to the UST 10-year rate of 2.5%, stocks are still attractive, especially when a long-term equity holder can expect growth on top of the 4.9% earnings yield. 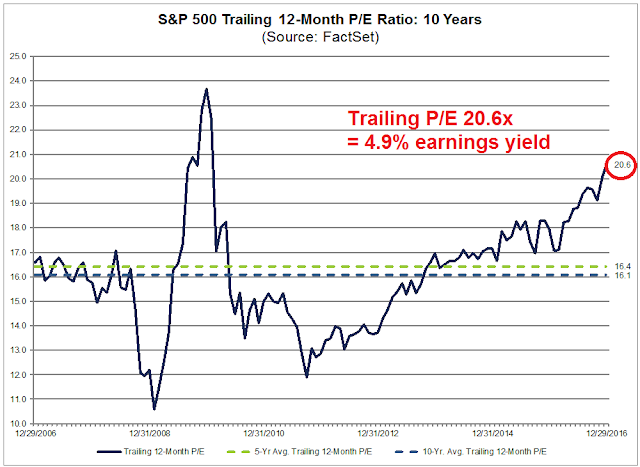 I performed some simplistic scenario analysis, based on the assumption that the equity risk premium, defined as the spread between earnings yield and 10-year Treasury yield, remains unchanged. The scenarios are:

The table below summarizes my findings. In a previous post (see How Trumponomics can push the SP 500 to 2500+), I had shown three components of equity gains. The first component is the global cyclical revival, which I estimated EPS growth at 6-8%. The second component comes from lower corporate tax rates, which could boost earnings growth by another 8-10%. To be conservative, I added the first two components together and modeled EPS growth at 15%. The third is the one-time buyback boost to stock prices from offshore cash repatriation, which I penciled in at a 5% price gain. In my scenario analysis, I also modeled what happens if rates were to remain the same, rise by 1%, or 2%. Further, I assigned probabilities to each of the outcomes. This table below shows a relatively optimistic case analysis as I assume that Trump has a 65% chance of getting his fiscal programs passed, with a 30% of a delay, and only a 5% of disaster. 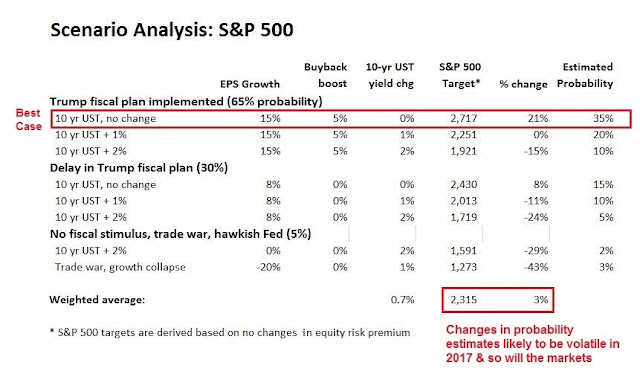 Here are some observations from this analysis. First, the weighted increase in UST yields comes to 0.7%, which is consistent with “dot plot” expectations of three 2017 Fed rate hikes and a parallel shift in the yield curve.

Since the election, the market has mainly been focused on the best case scenario, whose benefits are known. Even with a relatively optimistic estimate of probabilities, the weighted 2017 target only represents a 3% price gain in the SP 500. As Inauguration Day approaches and the market starts to focus on downside risks, no wonder stocks are starting to trade a little heavy.

Here is some sensitivity analysis. A more bearish probability weighting where the probability of Trump’s fiscal program passage falls from 65% to 45%, the delay scenario odds rising to 45%, and the disaster scenario at 10% results a 0% price gain in 2017. 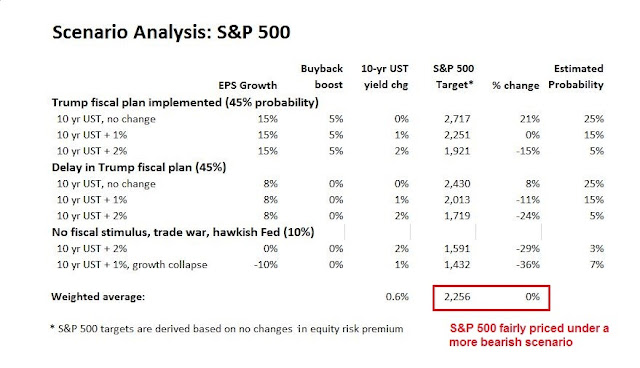 Some reasons for optimism

Does that mean equity market return expectations for 2017 are likely to be unexciting? Not necessarily. My conclusion of a relatively flat expected returns for the SP 500 in 2017 is based on an unsophisticated model with the simple assumption of a constant equity risk premium. There are a number of reasons for optimism .

Fatas went on to plot the evolution of the ERP and observed that current readings are not out of line with historical averages. In fact, the risk premium has room to fall. An ERP compression would have either the effect of P/E expansion, or offset the negative effects of a rise in interest rates. Based on my observation of the chart below, ERP could easily fall by 1.0-1.5% before getting in the red zone seen at the height of the last bull market. 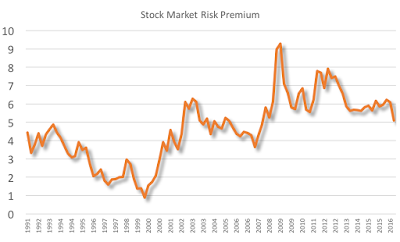 Here is another way of thinking about why the ERP has more room to fall. The market’s animal spirits haven’t totally revived yet. We need greater bullishness for a market top to form. This is consistent with sentiment readings from AAII bulls shown in the chart below. While short-term bullishness has risen, longer term metrics such as the 52-week moving average is still extremely low. Not every individual investor is glued to the screen 24/7. Most don’t check their portfolios on a hourly or daily basis. We need greater participation from the public for a top to form. 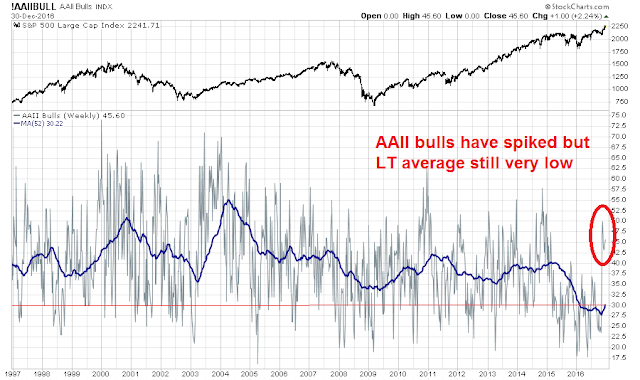 In addition, there may be some short-term goods news on interest rates. I have been waiting for Trump to make some comment on Fed policy since the December rate decision. Would he side with the hard-money audit-the-Fed crowd, who are his main supporters, who advocate for a rule-based Fed, which implies a tighter monetary policy? Or would he revert to his real estate developer’s persona and criticize the Fed for raising rates?

Last week, we saw part of an answer. Wilbur Ross, the nominee for Commerce Secretary, tweeted the following in support a weaker USD and therefore an easier monetary policy. 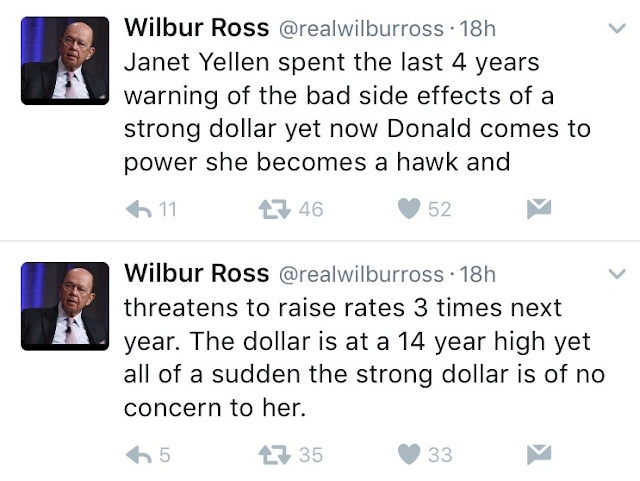 If Ross’ views does indeed represent the Trump administration’s position, then expect the new nominees to the two open positions on the Federal Reserve board of governors to have dovish tilts. In that case, it would ease any short-term concerns over interest rate pressures on stock prices. Longer term, however, there is a price to pay for stacking the board with too many doves. An overly accommodative Fed caught behind the inflation fighting curve will have to respond with a series of sharp rate hike that push the US and global economy into recession.

Here is where my scenario analysis gets a bit speculative, as there are so many moving parts. The combination of a falling ERP and a friendly Fed could push the expected price appreciation on the SPX to 6-7%. Add in another 2% of dividend yield, and equities would still look attractive in 2017 with a total return of 8-9%. The TINA (There Is No Alternative) scenario is still in play for stocks.

Looking ahead to Q1: A correction is likely

As I look ahead to Q1, some caution is warranted. The index of economic uncertainty has spiked… 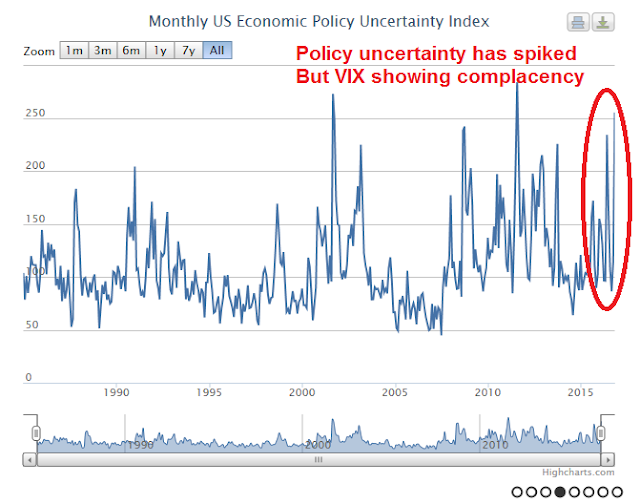 …but VIX remains low, indicating market complacency. Any negative surprise has the potential to spark a market correction.

In addition, Callum Thomas observed that the Citigroup US Economic Surprise Index, which measures whether macro indicators are beating or missing expectations, tends to be seasonally weak in the first three months of the year. In other words, be prepared for some growth disappointment on the macro front. 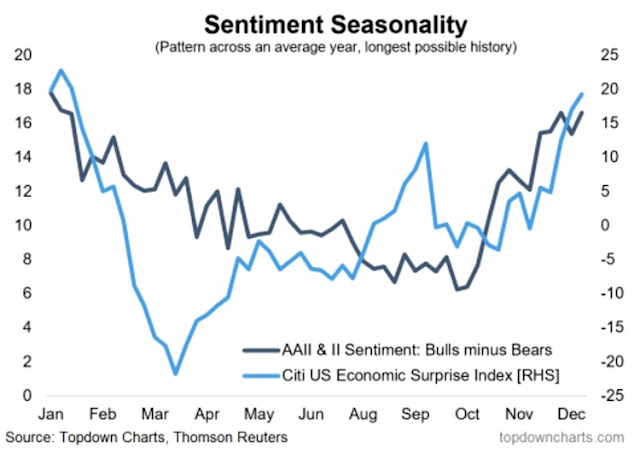 Other cyclically sensitive indicators, such as industrial metal prices, have retreated and breached their 50 day moving averages.

When I put it all together, it points to a correction of unknown proportions. I sent an email alert last Thursday indicating that the trading model had turned negative. My inner trader liquidated all his long equity positions and went short the market. Subsequent to that email, the SPX decisively broke down out of its range. The next most likely support level can be found at the SPX breakout level of about 2200.

I am seeing confirming signals from other asset classes from an inter-market analytical perspective. Bond prices, which have been inversely correlated to equity prices, are starting to recover. 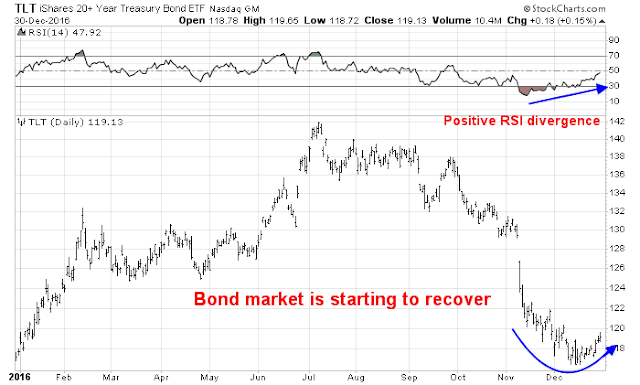 As well, gold prices have rallied out of a downtrend and they are turning up. 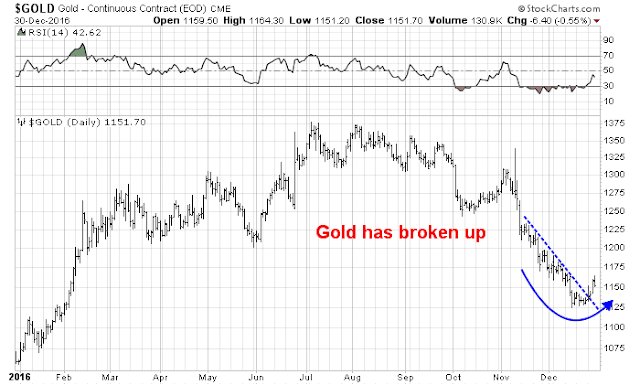 Barring any outlier surprises, such as a sneak attack on North Korean or Iranian nuclear facilities that upset the current geopolitical equilibrium, my inner investor remains constructive on equities and he is inclined to buy the dips. His base case scenario is a correction to test the breakout level at 2200, followed by a rally later in the year to fresh highs. The Dow will exceed 20,000 in 2017. 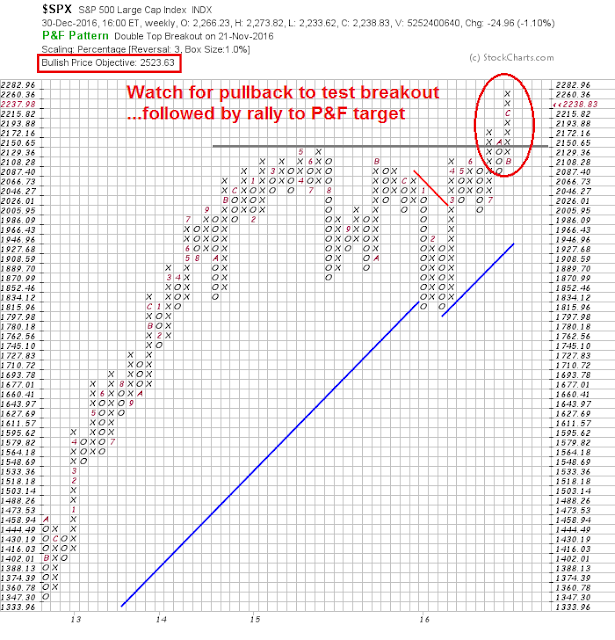 In addition, the monthly MACD buy signal on the Wiltshire 5000 remains intact. 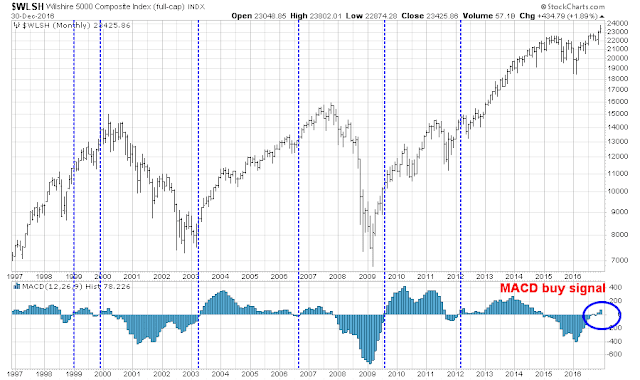 There will be fireworks, and volatility. I will be with you every step of the way.

6 thoughts on “The cloudy side of Trump”