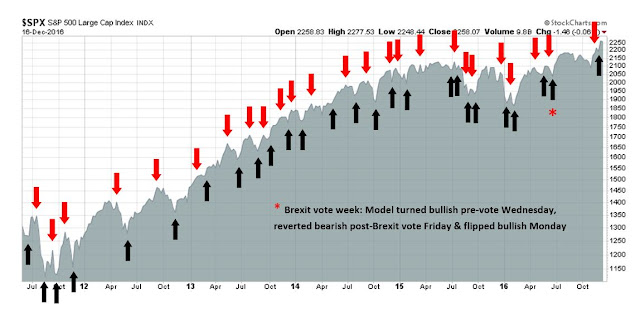 It’s nearing year-end and prognostication season. Rather than just gaze into my crystal ball and make a forecast for 2017, I will write a two-part series on the likely effects of the new president on the stock market. This week, I focus on the bull case.

Since the recent upside breakout, point and figure charting is pointing to a SPX upside target of 2523, which represents a gain of 11.7% from Friday`s close. I show how that figure is easily achievable under the Trump proposals – and more. 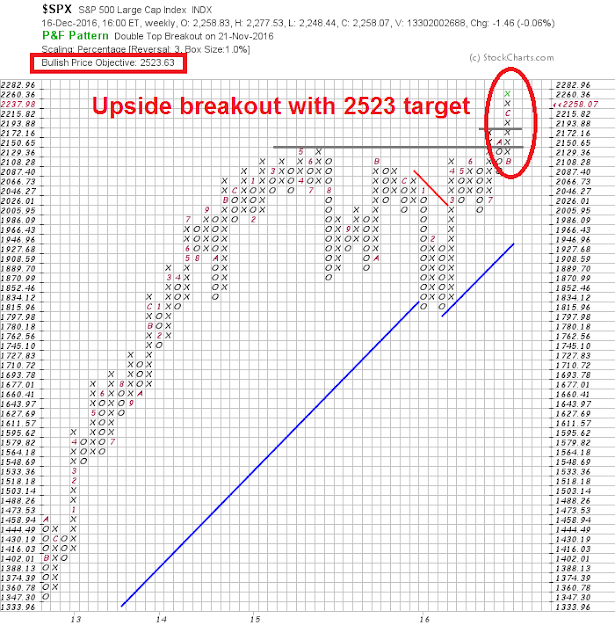 If we start with organic EPS growth, the November 4 pre-election bottom-up Street estimates from Factset showed a forecast of $119.47 for FY2016 SPX and $113.68 for FY2017, which comes to an earnings growth rate of 11.8%. The latest Factset consensus estimates in the post-Trump era also shows an identical EPS growth of 11.8%, which indicates that company analysts have not incorporated the unknown effects of Trump’s fiscal proposals into their earnings estimates. 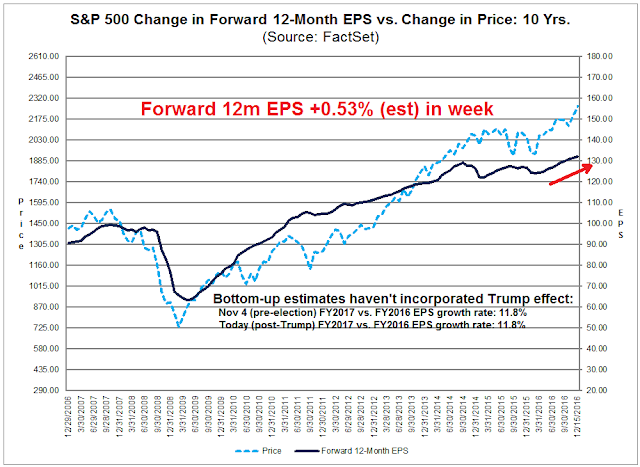 However, I would caution that these EPS growth estimates need to be taken with a grain of salt. Ed Yardeni showed that bottom-up derived Street EPS forecasts tend to start high and fall. That`s why I focus on the evolution of forward 12-month EPS, which is more stable. 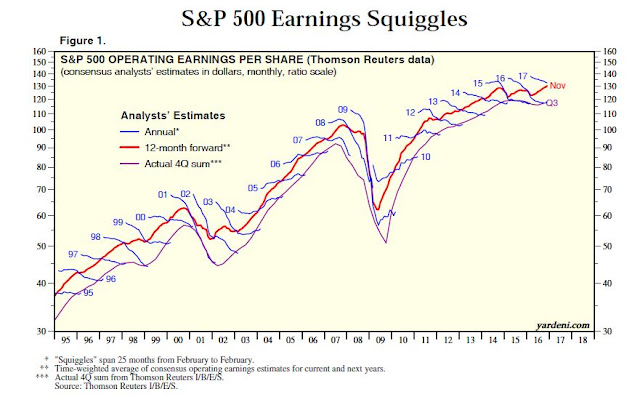 So let`s be conservative and cut that growth figure by somewhere between one-third and one-half. We arrive at an organic EPS growth rate of about 6-8%.

On top of that, we can add the tax cut effect of the Trump fiscal proposals.  Bloomberg recently summarized the tax cut earnings effect of different Street strategists. The growth projections vary, but come to about 10%:

That’s not all, Brian Gilmartin recently took a stab at estimating the offshore cash repatriation effect:

Yesterday, 12/6/16, at the CFA Chicago luncheon, Dan Clifton of Strategas Partners gave a great presentation on the coming fiscal stimulus and what it might look like and what it might mean for the US economy in 2017.

Looking at the numbers:

This obviously doesn’t include any cash generated from a reduction in effective tax rates, faster revenue growth or cash generated normally from operations, resulting in free-cash-flow.

Let`s summarize the results. Start with a 15-18% increase in stock prices, which assumes no changes in P/E multiples. Add to that an estimated buyback demand amounting to roughly 5% of total market cap, you have the bull case for stocks. As Brian Gilmartin put it:

In year-end meetings with clients, I’m telling clients from both sides of the aisle that the SP 500 could be up 20% next year. Prior to the election and since last Spring ’16, the SP 500 was already looking at its best year of expected earnings growth in 5 years. The proposed President-elect and Congressional fiscal policy could be another level of earnings growth above what was already built into the numbers, before November 8th.

While the fundamental outlook appears to be positive, no equity rally is sustainable without the participation of the big money institutions. The latest BAML Fund Manager Survey shows that the institutional risk appetite is rising in a big way.

They believe that global growth is returning. Growth expectations have spiked significantly in the last few months. 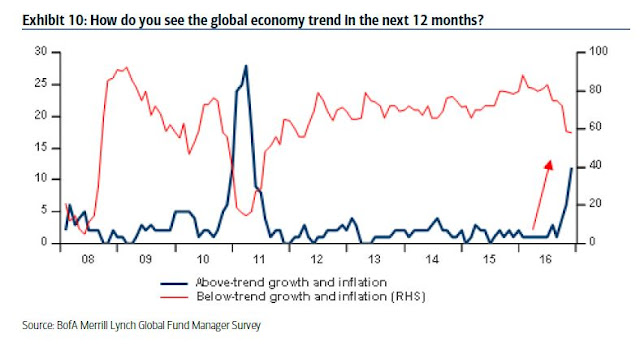 As a consequence, earnings expectations have also risen dramatically too. 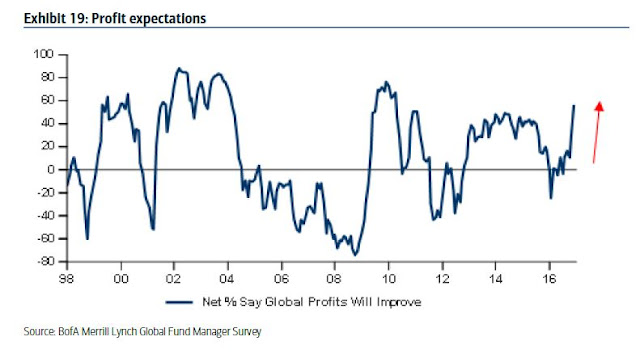 In response to this newly upbeat assessment, institutions are taking more risk with their portfolios. Readings are rising, but nowhere near crowded long levels. 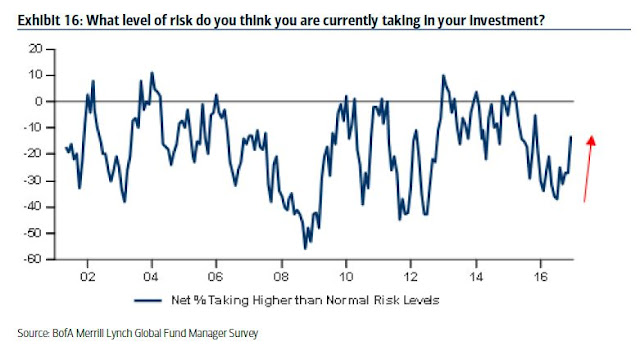 They are buying equities. 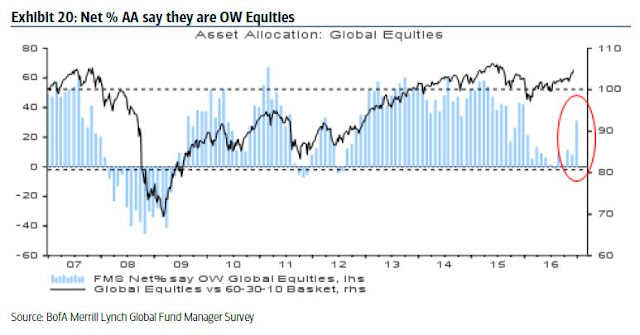 US equity exposure is rising, but they are not over-owned. 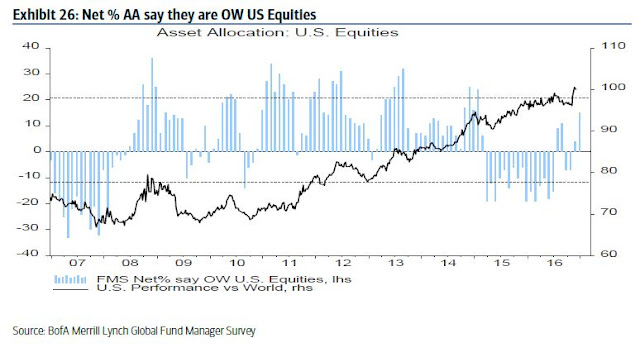 Similarly, the AAII sentiment survey of individual investors can hardly be described as being all-in on stocks. 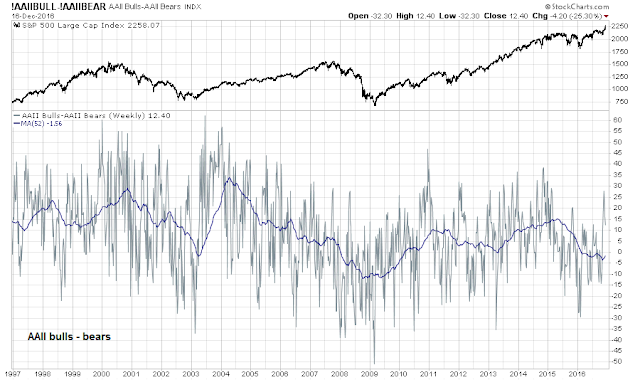 In summary, sentiment models show that investors are piling into risky assets, but the stampede is just in its early stages. There is still time to jump on the bandwagon.

What about valuation? Stock prices appear to be highly overvalued on CAPE, but Michael Batnick pointed out that the CAPE is a terrible metric for short-term market timing: “Over the past 25 years, the CAPE ratio has been above its historical average 95% of the time. Stocks have been below their historical average just 16 out of the last 309 months. Since that time, the total return on the SP 500 is over 925%”. 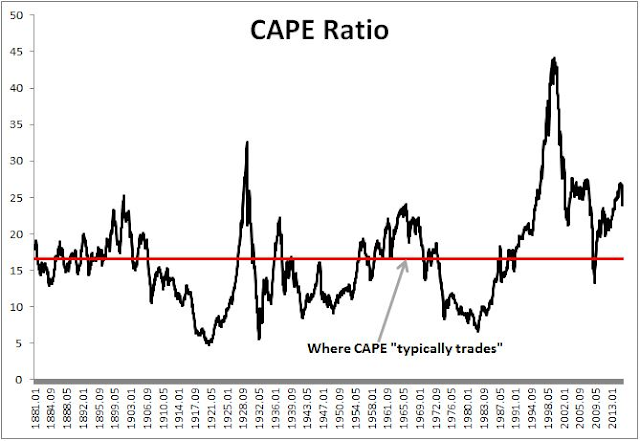 By contrast, the Morningstar fair value estimate shows that stock prices are mildly overvalued by 4%, but that’s not excessive compared to its own history. 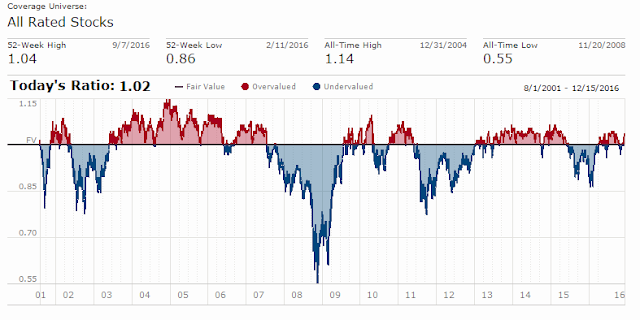 I would be far more worried if insiders were consistently selling in an overvalued market. The latest update from Barron’s of insider activity shows that insider activity at a neutral level, despite the proximity of all-time highs in stock prices.

The week ahead: Will Santa show up?

Looking to the week ahead, the Santa Claus rally may be just getting ready to get rolling. Now that the equity market has successfully navigated the hawkish FOMC rate hike, the seasonal pattern is highly favorable. Rob Hanna at Quantifiable Edges observed that stock prices tend to rise and continue rising starting December option expiry (OpEx) week, which began last Monday. 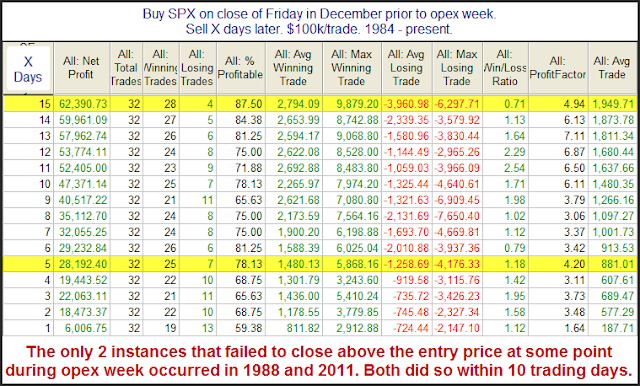 In addition, the electoral pattern shows that stock prices tend to have an upward bias and peaks out just after Inauguration Day. 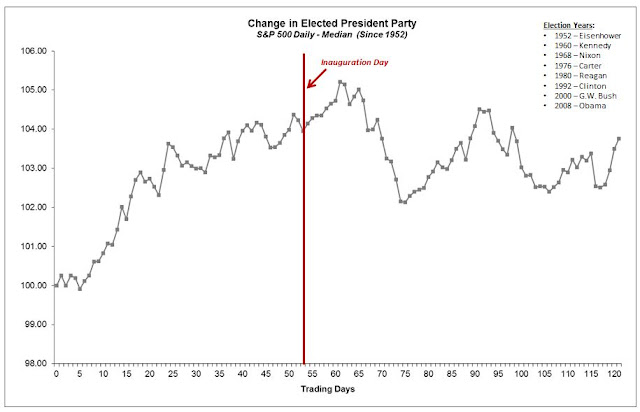 My inner investor remains bullish on stocks. My inner trader is positioning himself for the seasonal rally. Subscribers received an email notice last Thursday indicating that my inner trader had added to his long equity exposure with a purchase of small cap stocks.

Unless something earth shattering happens in the markets next week, postings will be light or nonexistent as I take a week off during the holidays. The next scheduled update will be on Monday, December 26 when I outline my Trumponomics bear case for stocks, and how I resolve the bull and bear scenarios.