Well, my Bremain call didn’t go so well (see Positioning for a Bremain result). As I write this, the BBC has called the referendum in favor of Leave by a margin of 52-48. GBPUSD is down about 10% and Asian stock markets are down 2-4%.

If you were correctly positioned for this outcome, congratulations, but don`t get overly excited about doing a victory lap as there is going to be market volatility ahead. During these episodes of unexpected market shocks, here is what I am watching for:

The first line of support for the SPX comes at about the 200 day moving average (dma), which currently resides at about 2020. With the market in such turmoil, the SPX is likely to test that level on Friday.

I will also watching my Trifecta Bottom Spotting Model for signs of panic and capitulation (see link for full model description and use this link if you would like real-time updates to follow along at home). 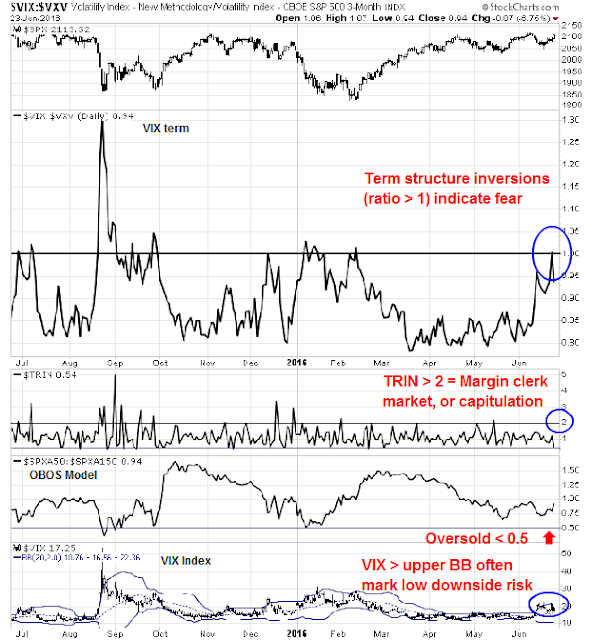 Another way to watch for a bottom is to watch for oversold readings on various technical indicators. The market ended Thursdays at or near overbought levels, so it remains to be seen how much these indicators retreat on Friday. The Fear and Greed Index, for example, will be a useful intermediate term indicator to watch. 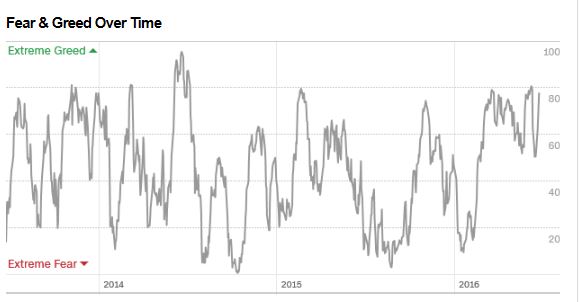 Breadth readings such as % of stocks above the 10 dma, which is available from IndexIndicators, will also be a useful gauge of how much panic there is in the market. 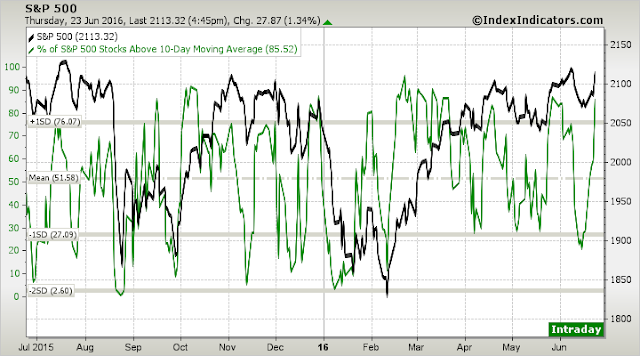 As well, such periods of market turmoil are ripe for official intervention. Janet Yellen indicated in her Congressional testimony that the Brexit vote was one of many risks that the FOMC considered in making its interest rate decision. As I write these words, the GBP is in freefall and both USD and JPY are rallying. These are the kinds of classic conditions that calls for coordinated central bank intervention.

An alert reader also sent me a note by George Friedman of Stratfor, who indicated that the UK government has lots of wiggle room even after the Brexit vote:

A vote to exit does not mean that the U.K. has left the EU by any means. Under the Treaty on European Union (TEU), the vote would put in motion a process that takes two years. However, the decision on whether Britain exits sooner is up to Britain. Potentially, Britain can remain in the EU even longer, if the members of the EU vote unanimously to allow it to remain longer.

The government of Prime Minister David Cameron is bound by the referendum, but is opposed to leaving the European Union. So long as he remains prime minister and maintains a majority in Parliament, it is up to him to decide what time frame he will pursue. He can leave the EU tomorrow or ask the EU to extend the time limit – in effect, the exit could be tabled indefinitely. The referendum ballot does not provide a timeline, leaving it to Parliament.

If panic sets in, the markets could easily turn around on any hint of official action. As there is a weekend coming up, the EU could conceivably hold an emergency meeting to try and work out a compromise in order to stabilize the situation.

If you are short, I would be cautious about maintaining such a position over the weekend because we have no idea what might happen.