Positioning for a Bremain result – Humble Student of the Markets

Mid-week market update: Even though the polls show the two sides running neck and neck, my inner trader is positioning for a Remain result in the UK referendum for the following reasons.

This is obviously a speculative trade and much could go wrong. The pollsters totally missed the results of the last UK election. In addition, severe weather in southeast England could affect turnout and therefore skew results.

There have been many polls in the last few days and the spread between the two sides are well within the statistical margin of error. Consistent with the experience of the Scottish referendum, there seems to be movement towards embracing the status quo, or Remain. Sentiment has seen a surge in the last two weeks to Leave, based on the promise of a new beginning, followed by mean reversion in the last week, based on rising risk aversion.

The pollster YouGov modeled this effect and expected the Leave surge to peak on June 13 – and that forecast has been consistent with the actual results so far. 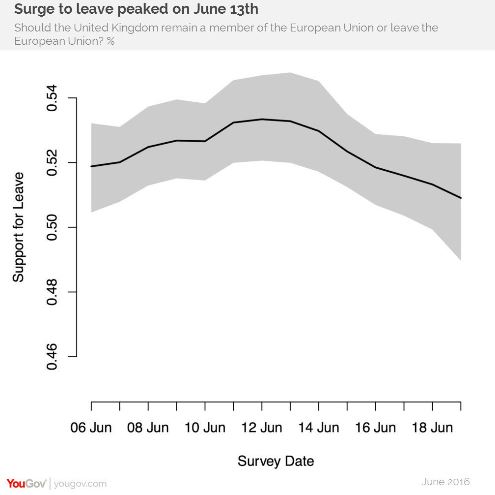 When a YouGov poll released early this week showed that Remain had gained ground, their analysis indicated that the result was likely due to the mean reversion effect and not the murder of Jo Cox:

While there will be speculation about whether this movement is connected to the tragic death of Jo Cox, we do not think that it is. The fieldwork for our Good Morning Britain poll was entirely conducted before she was attacked and a third of the responses to our Sunday Times poll were also done before news of her death was reported.

The underlying figures suggest the movement may be more to do with people worrying about the economic impact of leaving the European Union. In the Sunday Times poll 33% of people said they thought that they would be personally worse off if Britain left the EU, up from 23% a fortnight ago and easily the highest we have recorded on this question.

The pattern of public opinion on the EU referendum is looking very similar to the Scottish referendum in 2014. Back then there was a long period of little movement when most ordinary voters were paying little attention, this was followed by a period of movement in favour of Yes, as people were excited by the prospect of change, followed by a sharp correction back to the status quo as, in the final days, people worried about the risks associated with it.

This chart of the evolution of betting odds from bookmaker Betfair shows a similar pattern of a surge for Leave and mean reversion towards Remain, which is consistent with the experience of the Scottish referendum: Despite the closeness of opinion polls, the bookmakers have kept the last minute shift towards status quo in mind. A survey from Oddschecker shows that Remain lead Leave by odds of about 75% to 25%.

The markets remain unsettled ahead of the vote. A research report from Credit Suisse (via Business Insider) indicated that the British Pound (GBP) could see a reaction that’s worst that Black Wednesday, when the UK broke from ERM in 1992. The GBP fell 4% on Black Wednesday and had declined 15% for the the month. 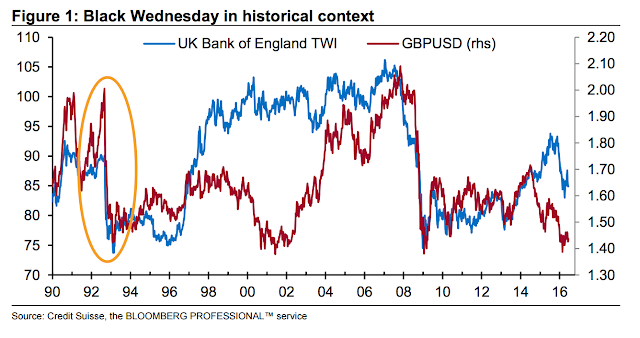 Credit Suisse believes the current circumstances could be even worse that 1992:

An editorial by George Soros, the man who famously “broke” the Bank of England in 1992, is in agreement with the Credit Suisse analysis of a substantial fall in GBP.

To start off, sterling is almost certain to fall steeply and quickly if there is a vote to leave– even more so after yesterday’s rebound as markets reacted to the shift in opinion polls towards remain. I would expect this devaluation to be bigger and more disruptive than the 15% devaluation that occurred in September 1992, when I was fortunate enough to make a substantial profit for my hedge fund investors, at the expense of the Bank of England and the British government.

It is reasonable to assume, given the expectations implied by the market pricing at present, that after a Brexit vote the pound would fall by at least 15% and possibly more than 20%, from its present level of $1.46 to below $1.15 (which would be between 25% and 30% below its pre-referendum trading range of $1.50 to $1.60). If sterling fell to this level, then ironically one pound would be worth about one euro – a method of “joining the euro” that nobody in Britain would want.

Consistent with warnings from CS and Soros Bloomberg reported that the BoA Skew Index is spiking as there has been a rush to hedge macro risk. 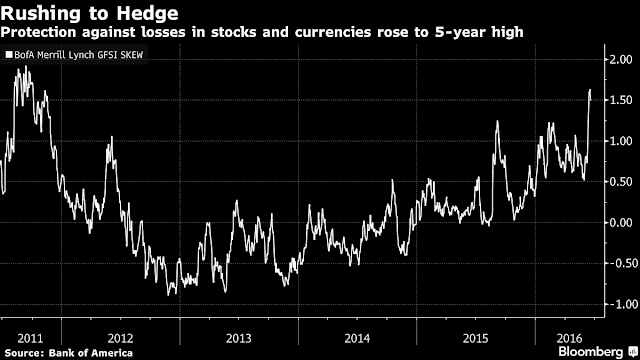 Market liquidity in GBP options have been constrained by market maker capacity and anxiety has leaked over to the far more liquid VIX Index as a proxy for hedging Brexit. As the chart below shows, the ratio of short term VIX (VXST) to long term VIX (VXV) has inverted and the VIX Index is rising, both indicating elevated fear levels. 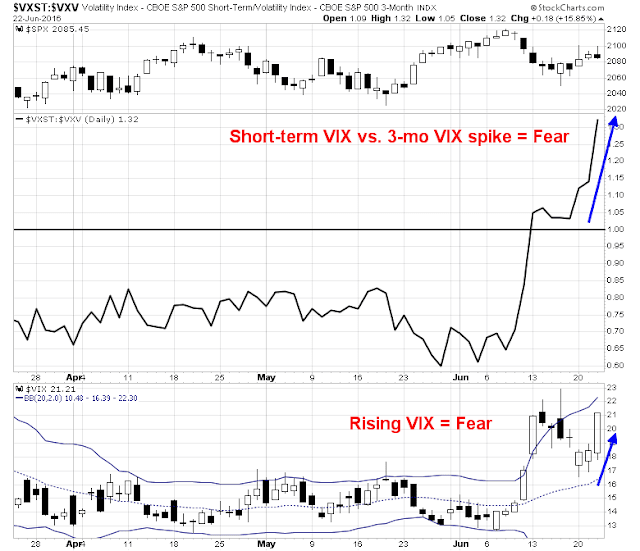 Mark Newton pointed out that fear is off the charts at levels not seen like the Great Financial Crisis: 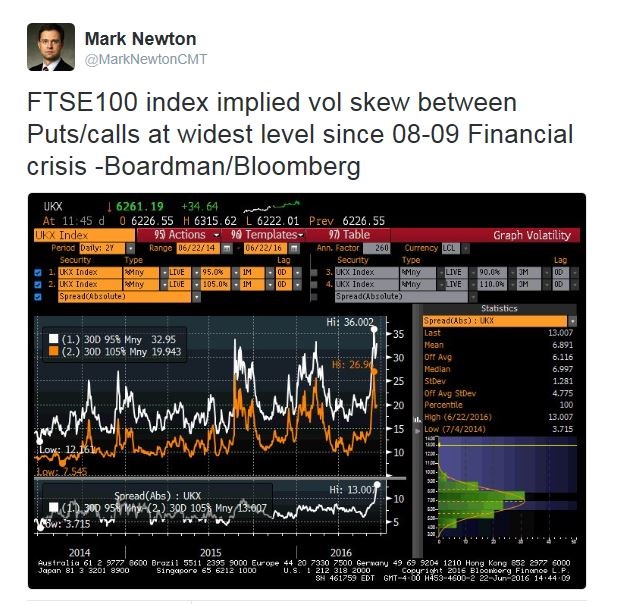 These readings suggest that market anxiety remains high. Should we see a Bremain result on Friday, the likely stock market reaction will be a rally and not a “sell the news” price retreat.

After all the campaigning is over, there is an additional wildcard for the vote – the weather. The UK Met Office is forecasting heavy rains with possible flooding for southeast England on Thursday. Most of the afflicted areas tilt heavily towards Leave, though London has polled strongly for Remain. The chart below depicts the weather forecast on the left and the Leave/Remain geographic divide on the right (Remain = red, Leave = blue). 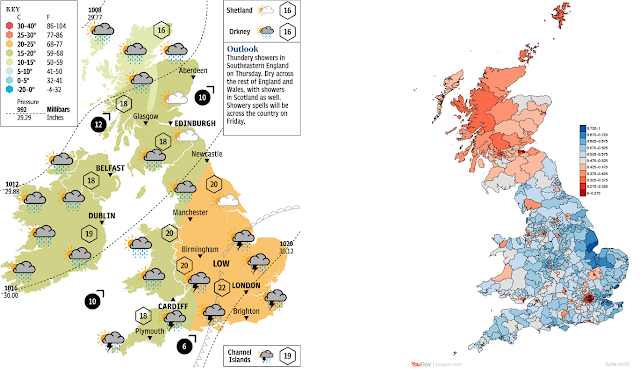 Here is what I am monitoring. The Guardian has published a useful guide of what to watch for as the results roll in (all times are local and approximate):

12.30am
Sunderland reports. Expect Leave to have a lead of six points if the national vote is tied. Sunderland will be followed by Wandsworth and the City of London, most likely reporting huge leads for Remain.

A slow trickle of results will keep the broadcasters occupied. Newcastle and Hartlepool will illustrate the difference between big cities and towns. Remain will hope to have a double-digit lead in Newcastle, but will rightly fear a big loss in Hartlepool.

2am
The first big wave of results, with 22 councils expected to declare at or around this time. Worth keeping an eye on Wrexham, one of the more Eurosceptic parts of Wales, which would be close if the national result is close.

2.30am
Castle Point in Essex – one of the most Eurosceptic authorities in the country, and an area in which Ukip has often done well – declares around this time. Perhaps more useful as a signpost are the two Welsh declarations expected about now – Swansea and Caerphilly. Caerphilly, in particular, is likely to be finely balanced between Leave and Remain.

3am
By this point, we’ll be roughly two-fifths of the way there. A key area to focus on is City of Lancaster, which will probably vote the same way as the rest of the UK.

3.30am
Edinburgh reports along with Aberdeen, Dumfries and a number of other Scottish local authorities. Edinburgh is tipped by Ladbrokes to have the highest vote in favour of Remain, so the outcome isn’t in doubt, but turnout might be important.

4am
The motherlode – 88 areas are expected to report at around this time. It may be at this point that broadcasters start considering whether to make a projection.

5am
By now roughly nine out of 10 areas should have reported. The remainder are mostly rural areas which lean towards Leave, sometimes quite heavily.

6am
If no projections are forthcoming by this point, the referendum may be achingly close. Sefton, expected to report about now, is one of a number of Labour-leaning areas in Merseyside that might disappoint the Labour party by very narrowly voting to leave.

7am
The last batch of areas to report. Most of these favour Leave, Arun in West Sussex and Waveney in Suffolk particularly so. If the result is still not known by this stage, it is almost certain that some constituent parts of the UK have voted to leave the EU while others have voted to remain, opening up a constitutional crisis lasting far beyond Friday morning.

Peter L Brandt pointed out that hedge funds have been given permission to conduct exit polling, though the results will be embargoed from publication.

The British government allows large hedge funds to conduct their own exit polling. They are not allowed to release their findings until 22:00 British Summer Time (BST) — there is no prohibition against their trading based on their own Brexit exit polling.

Properly sampled Brexit exit polling in UK voting is extremely accurate (usually within a +/- 1% error). Hedge funds will have a good indication on the Brexit vote by midday BST and will almost certainly have solid data by 18:00 BST. There is an embargo on publishing results until 22:00 BST. Thus, hedge funds will have a lead of many hours over the average market speculator.

If these hedge funds are trading on exit polls, then we may see some clue of early results by watching the currency and other markets on Thursday. In particular, I’ll be paying careful attention to the GBPEUR exchange rate over the course of Thursday during New York hours after the European markets have closed.

7 thoughts on “Positioning for a Bremain result”