The Brexit Pandora’s Box – Humble Student of the Markets

For my (mainly) American friends, file this under “why you don’t understand Europe”:

The Vietnam War was a war that scarred the national psyche and dramatically changed the tone of American foreign policy for a generation. If you visit the Vietnam Memorial in Washington DC today, you will find roughly 58,000 names of fallen soldiers from that period. Now imagine if instead of losing 58,000 soldiers, the United States lost 2.5 million during the Vietnam War. For a country like the US of roughly 300 million people, that kind of casualty rate would mean that virtually every household in America would be touched by combat death, whether it’s a father, son, brother, uncle, friend or neighbor. Then 25-30 years later, which is roughly the span between the Vietnam War and 9/11, the country got involved in another conflict with a similar death toll.

That’s what happened to many European countries in the First and Second World Wars – and the losses quoted would be roughly what the equivalent losses are for the US on an equivalent per capita basis on par with many European countries. The Credit Suisse Global Investment Returns Handbook has documented the financial cost of a century of war in Europe. Here are the real returns to different asset classes in France over the last century. In addition to the human carnage, investors suffered devastating losses during those wars. 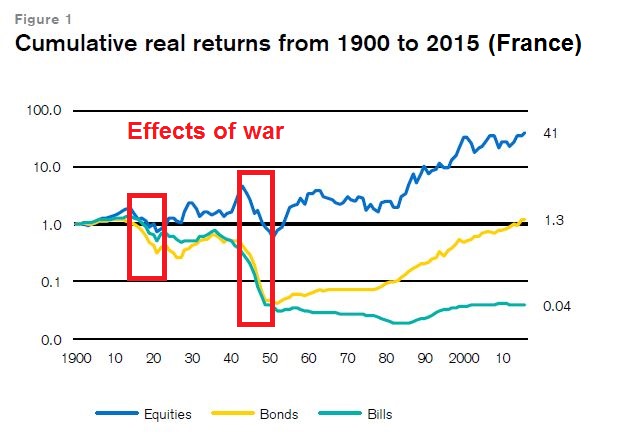 Here is the same analysis for Germany. In addition to the lives lost, many investors had to contend with the permanent loss of capital. Some of those “risk free” interest rates that may have been in financial models weren’t so free of risk anymore. 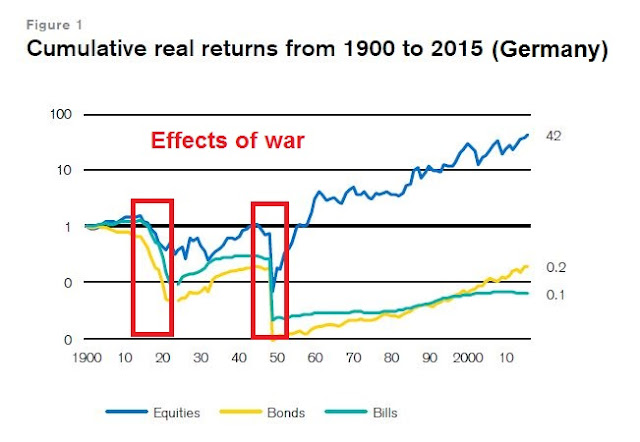 The UK fared a lot better as unfriendly foreign troops never set foot on its soil. On an inflation adjusted basis, its equity returns was an order of magnitude better than France or Germany. 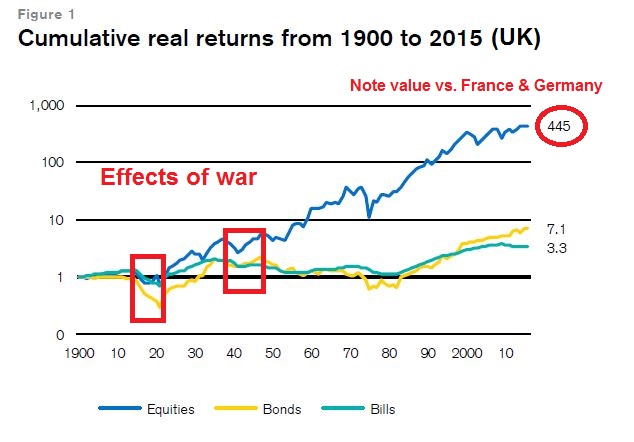 For comparative purposes, here is the return record of US assets. Americans were fortunate to have escaped the two world wars with minimal financial damage. The Great Depression caused more equity damage than the wars. The terminal real value of equity investments was three times better than UK results. 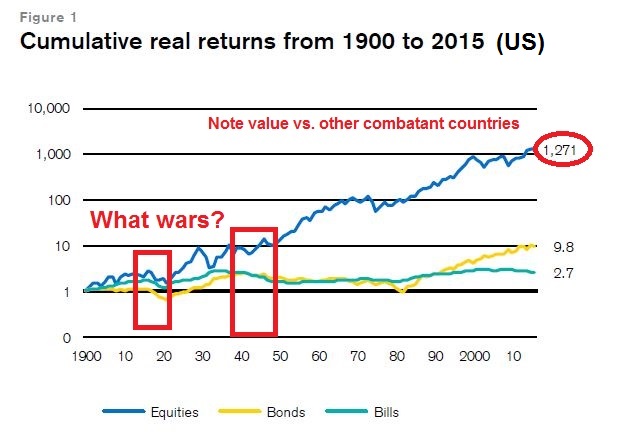 So is it any surprise that at the end of the Second World War, the leadership of Western Europe surveyed the carnage and came to a conclusion that we can never do this again. Ever. Thus the Common Market, the EEC and later the EU were born. While it was originally structured as a free-trade agreement, the political intent was to bind the two main combatants, France and Germany, so tightly together so that a European war cannot happen again. The political goals of Europe has largely succeeded. Today, if Angela Merkel mobilized the Bundeswehr and told the troops that they were going to war against the French, the men would all laugh, have a beer and go home.

That is the miracle of Europe. Against the tail-risk of millions killed and cities devastated, the price of little squabbles about bailing out Greece seems like a minor price to pay.

The rise of the Euroskeptics

Today, the political glue that holds Europe together is starting to disintegrate. Regardless of what happens on Thursday, the Brexit referendum is a symptom of how a rising tide of nationalism across Europe is opening up a Pandora`s Box. This new Pandora’s Box is unraveling of the political consensus holding Europe together.

In a past post (see A history lesson, and why Europe should try to be more Canadian), I highlighted a column by Margaret Wente in the Globe and Mail about how those of us in Canada are different from Old World.

Our identity is not defined by blood, or by our sense of destiny. We have no concept of Volk. We’re just folks. We don’t care who you are or where you came from or who or what you worship, as long as you share our good Canadian bourgeois values. Don’t litter. Send your kids to school. Wear a poppy.

(For the uninitiated, the tradition in British Commonwealth countries is to wear a poppy on Remembrance Day, November 11, as a remembrance of the sacrifices made in past wars.) Those of us living in the New World tend not to be as tribal as the Old World – and tribalism is what the European Project is trying to minimize.

Never before have populist parties had as strong support throughout Europe as they do today. On average a fifth of all European voters now vote for a left-wing or right-wing populist party.

The voter demand for populism has increased steadily since the millennium shift all across Europe. No single country is clearly going against the stream. 2015 was the most successful year so far for populist parties and consistent polls show that right-wing populist parties have grown significantly as a result of the 2015 refugee crisis. So far this year left-wing or right-wing populist parties have been successful in parliamentary elections in Slovakia, Ireland, Serbia, and Cyprus, in a presidential election in Austria and in regional elections in Germany. 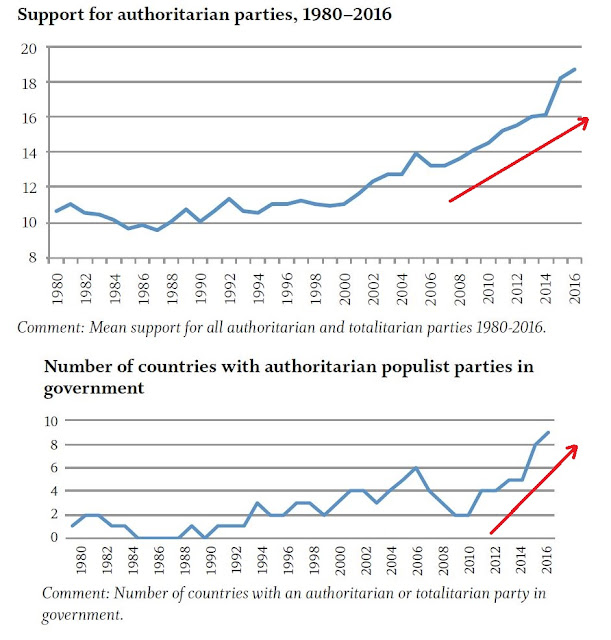 The news is full of the rise of Euroskeptic parties with authoritarian populist leanings (both left and right) headed by the likes of Le Pen (France), Wilders (The Netherlands), Orbán (Hungary), Grillo (Italy) and so on. As an example of the inroads made by these Euroskeptic protest movements, Beppe Grillo’s Five Star party’s candidate, Virginia Raggi, won the election as Rome’s first female mayor on the weekend.

The Pew Research Center recently surveyed Europeans and showed how their people are turning inward: 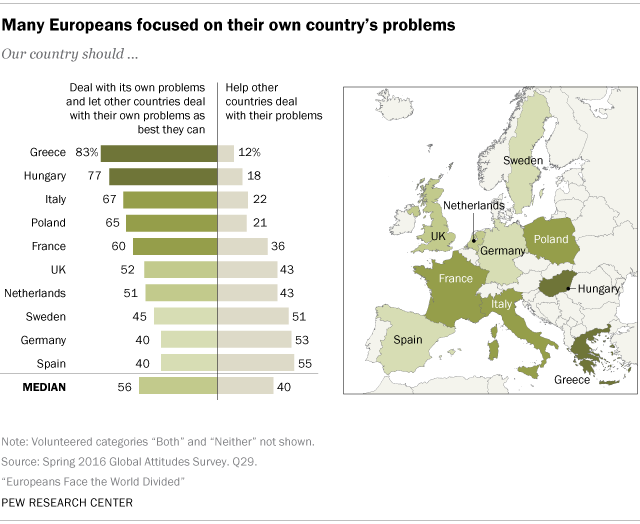 In foreign policy, even though they profess support of greater engagement and multilateralism, polling internals indicate that nationalism remains ascendant and appetite for compromising with allies is low. The Brexit referendum is an example of how its people are turning inward. As this analysis of the demographic leanings in the vote demonstrates (via Ian Bremmer), Brexit is mainly an English initiative as Scotland, Northern Ireland and Wales tilt towards Remain while most of the Leave support comes from England (except for London). 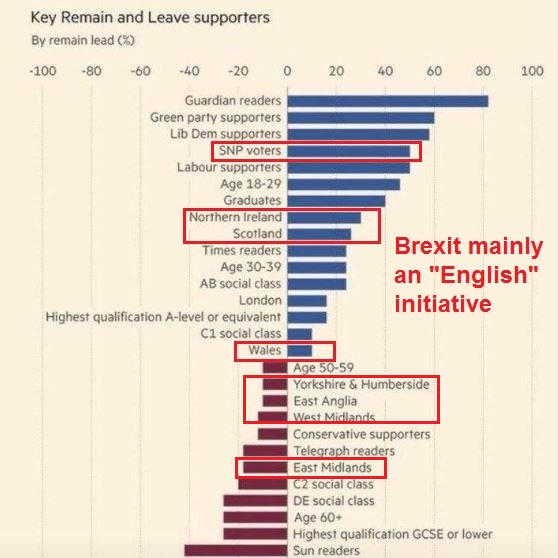 Should the Leave side win, the most likely outcome would see Scotland holding another succession referendum, but this time succeeding, followed by possibly Northern Ireland and Wales. The United Kingdom would fragment into its basic unit of Volk, just as Europe is fragmenting.

How Europe can end

The disintegration of the European ideal is the greatest threat to European stability – through rising nationalism and tribalism. Problems like Cyprus, Greece, Spain and Italy can be fudged through the kinds of messy compromises that are typical of Europe. But if enough Euroskeptics take control of enough member states, the European Dream dies. The markets implicitly understand this risk. As the Brexit Leave side was gaining in the polls, it wasn’t the yield on the 10-year Gilt that was rising, but the spread on peripheral debt that was blowing out.

To be sure, no one is going to war if the Leave vote succeeds this week, but it creates a higher element of longer term tail-risk for the region. In a future post, I will detail one possible development that may create hope that Euroskepticism may be reaching its high tide mark.

13 thoughts on “The Brexit Pandora’s Box”