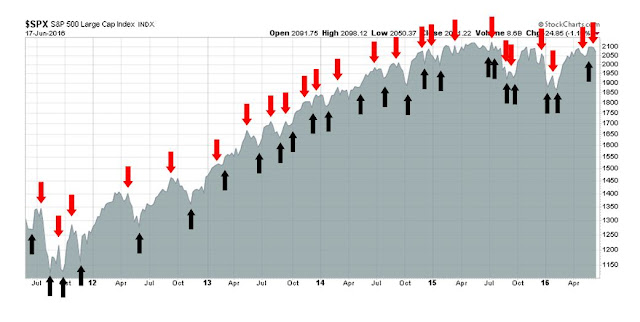 My last post (see Why you need to give the bull case a chance) elicited a considerable amount of comment. Most of the pushback I got on the equity bull case amounted to a question of, “Where’s the growth coming from?”

I recognize the concerns. As this chart from Factset shows, the equity market has had to endure five consecutive quarters of falling year-over-year EPS growth. How can anyone possibly be bullish under such circumstances? 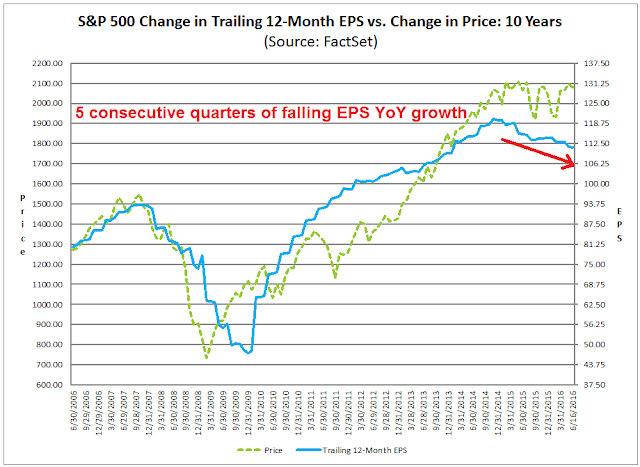 In this post, I would like to explain my bull case for stocks, with an initial SPX target of 2200 and, depending on the Fed’s reaction function, up to 2400-2500.

Looking backwards in the rear view mirror, I can sympathize with many of the growth concerns. The chart below shows YoY GDP growth (blue line) and ISM Manufacturing (red line). US economic growth decelerated for most of last year and suffered a mild industrial recession in Q4 2015 and Q1 2016, from which it appears to be starting to recover. 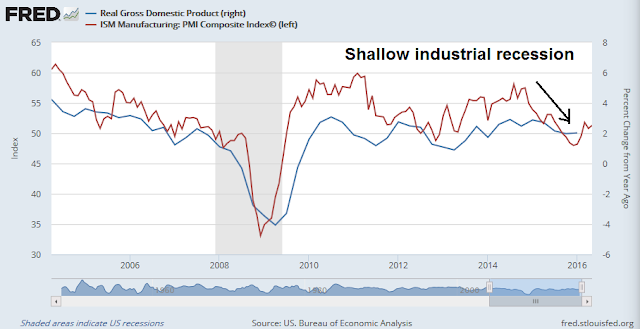 On a forward looking basis, the latest Atlanta Fed’s nowcast of Q2 GDP growth stands at 2.8%, which represents a robust recovery from the winter months.

Also on a forward looking basis, the bottom-up outlook for earnings looks brighter too. Based on this chart from Factset, I make the following observations (annotations are mine):

The stock market is forward looking, not backward looking. So don’t make the mistake of only looking in the rear view mirror. 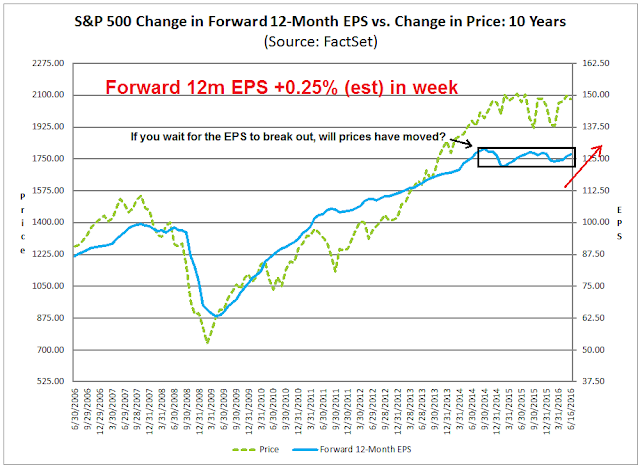 I would also like to address the perennial bearish objection that Street analysts are terrible at calling turning points in the economy and therefore rising forward EPS mean nothing. Much of the recent earnings decline can be attributable to two factors, namely USD strength and the weakness in oil and other commodity prices. Arguably, they are the same macro factor as the direction of the USD is inversely correlated with commodity prices.

This chart of Q2 2016 EPS revisions by sector tells the story of YoY EPS growth. The worst hit sectors are the commodity producing sectors of Energy and Materials. In addition, downward estimate revisions in the Technology sector is mainly attributable to highly stock specific factors in three large cap stocks: AAPL, MSFT and IBM. 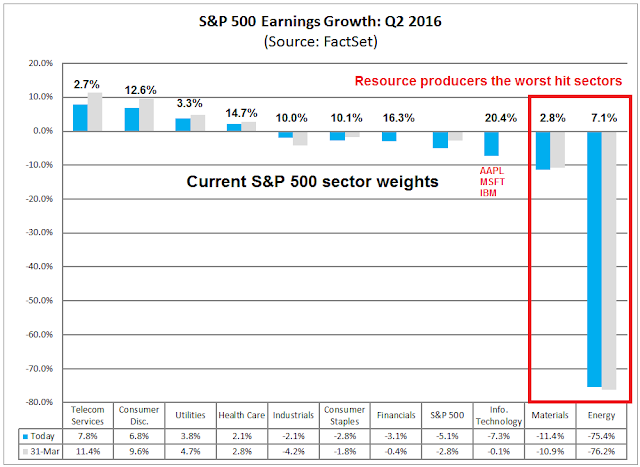 From a macro perspective, however, we can see that many of the earnings headwinds abating. The USD Index has stopped strengthening and it has been range bound for about a year. The bottom panel of the chart below shows the YoY rate of change in the USD, which has fallen to the zero line. A rising USD created an earnings headwind for exporters as the negative currency translation squeezed their operating margins. A flat USD on a YoY basis eliminates that headwind and should result in better earnings growth, starting in Q2 2016. 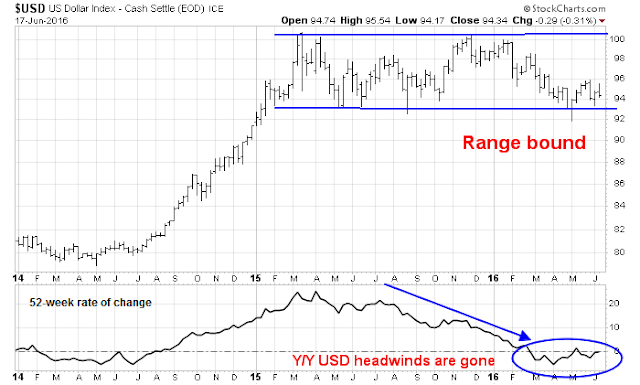 This chart of commodity prices, as measured by the CRB Index, tells a similar story. The CRB Index has stopped falling and it has rallied out of a downtrend. The rate of change chart also shows that prices are steadily getting “less bad”, which should be constructive for the earnings of companies in Energy and Mining. 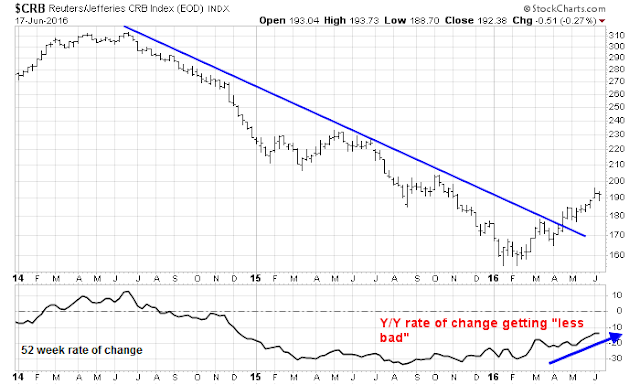 So even if you believe that Street analysts are idiots and know nothing, there are definite macro forces that are supportive of better earnings growth in Q2 2016. An EPS growth projection of 5-10% is a reasonable assumption for the H2 2016. Assuming no changes in P/E multiples, this should result in a stock market advance of 5-10%, which makes an SPX target of 2200 quite feasible.

In order for SPX to rise significantly higher than 2200, we need P/E expansion. P/E expansion is a function of higher growth expectations, or a lower discount rate, or bond interest rate. The latter is highly dependent on the Fed’s reaction function to economic conditions.

First, some basics – the Federal Reserve has a dual mandate, price stability (fighting inflation) and maximizing employment. So let’s think like Fed bureaucrats and address how they think about their dual mandate. The Fed uses a Phillips Curve modeling framework, which states that policy makers can trade off unemployment and inflation rates in the short run (chart below via Wikipedia). In addition, they have stated that they are aiming for an inflation rate of 2% and they are watching labor markets to see how close the economy is to full employment. 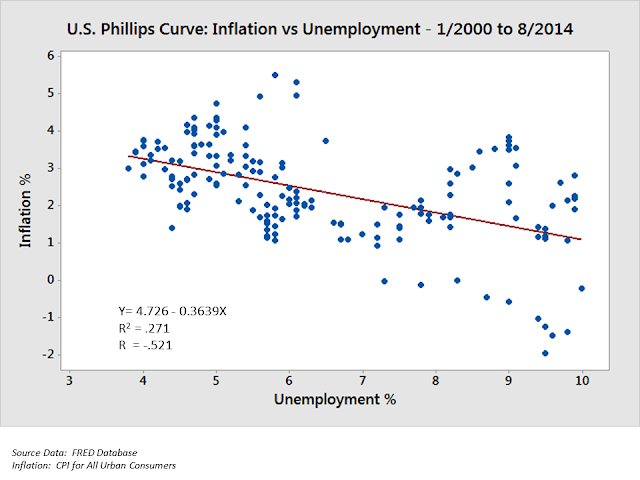 Currently, core Personal Consumption Expenditure (PCE), the Fed’s preferred inflation rate metric, is creeping up towards the Fed’s 2% inflation target and wages are displaying the typical rising pattern seen in the latter stages of an economic expansion when labor markets get tight. 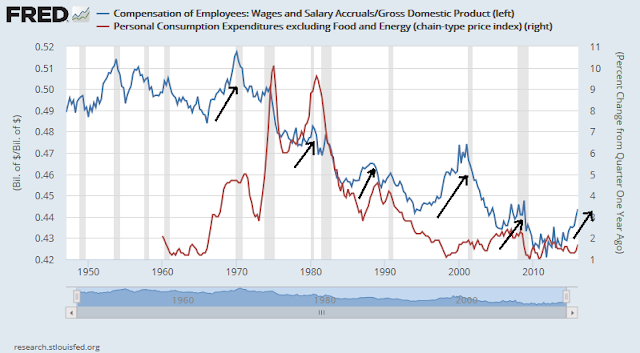 So the Fed should start to raise rates, right? Well, it depends. Take a detailed look at the Phillips Curve chart above. What does the Fed plug into the y-axis to measure inflation? Does it use a measure like core PCE, which is backward looking, or it does it use inflationary expectations? 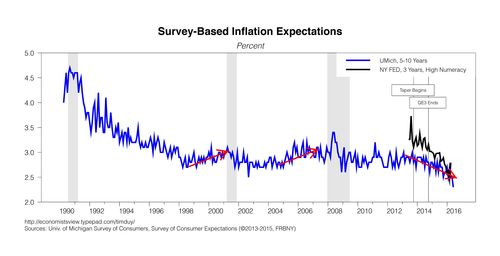 Here are the inflationary expectations as determined by the bond market, which is also falling.

More upside before the market top?

Street analysts spend a lot of time trying to figure out what the Fed will do next. By contrast, I spend more time trying to determine the Fed’s reaction function to data development. So here’s the tricky part of forecasting interest rates. Assuming that the economy stays on its current path of slow and steady growth, employment continues to rise and so does current inflation metrics such as core PCE and wage growth. On the other hand, inflationary expectations stay muted. What does the Fed do?

An educated guess (and it’s only a guess) is the Fed stays on hold longer than the market expects while the internal debate rages as to whether inflationary expectations are becoming un-anchored to the downside. In practice, we may see a single rate hike in December after the election. This do-nothing policy would eventually reach a tipping point at some time in the future, but that’s a problem for later.

This scenario leaves the door open for greater P/E expansion this year as it becomes evident that growth is returning and the Fed remains dovish. That’s how the SPX can get to 2400-2500, as growth expectations ramp up later this year and the rate environment stays benign.

Any market analysis today would be incomplete without addressing the elephant in the room, the Brexit referendum later in the week. There are all sorts of opinions about what might happen under Brexit, from benign (Warren Buffett) to dire (Bank of England). Markets would undoubtedly become highly volatile should the UK vote to leave the EU.

Opinion polls in the past few weeks show that the Leave camp has been steadily gaining ground, but several polls released this weekend shows a substantial swing in Remain’s favor. The polling firm BMG recently provided a fascinating window on the science of polling. Business Insider reported that a (pre-Jo Cox killing) BMG telephone poll had given Remain a 7 point lead, while a separate BMG online poll indicated a 10 point lead for Leave. What gives?

The discrepancy can be explained by the methodology detailed on the BMG website. Simply put, Remain supporters are difficult to reach and BMG’s polling results show that when the pollster persists in calling target respondents who don’t answer the phone, polling results change. The Remain lead rises dramatically after the second call, then falls back and steadies after the third call. 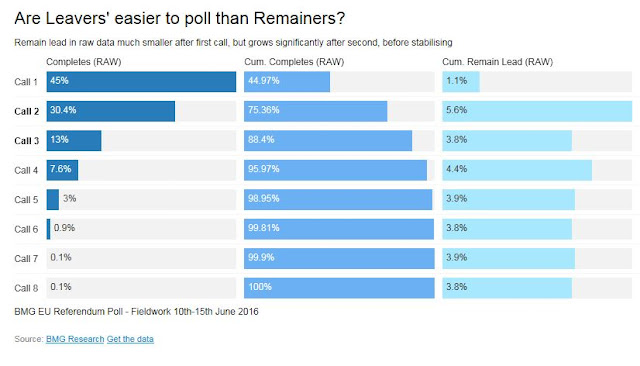 For some context of why this is important, most pollsters had missed the move towards the Conservatives in the last UK general election. The few who called it right tried very hard to poll these “hard to reach” voters. So getting a complete picture is critical to getting the right forecast.

Viewing the Brexit referendum through another lens, I could put on my market technician’s hat and assert that price gives us all the information we need. The bookmakers, who are putting actual money on the line, are giving the Remain side about 66% chance of succeeding. More importantly, momentum is currently in Remain’s favor. The Oddschecker site shows that Remain odds are shortening (blue) while Leave odds are rising (pink).

If these results hold up, then expect a relief rally to start when the referendum results become known.

In an earlier post last week (see The VIX tail wagging the SPX dog), I noted that the VIX Index, which is a measure of fear, had surged above its upper Bollinger Band (BB), but the market decline was fairly mild relative to other VIX spike episodes. The general level of anxiety is probably attributable to the Brexit referendum, as GBP (Pound Sterling) volatility had leaked into the VIX.

The bottom panel of the chart below shows the short-term VIX (VSTX) has inverted against the three month VIX (VXV), which is an indication of short-term market fear and GBP volatility hedgers coming into the equity market. In addition, the VIX upper BB ride is becoming a template of a stock market bottoming process. In the past, the market had bounced when the VIX Index rose above its upper BB, rallied and then fallen back about a week later to test the previous low. 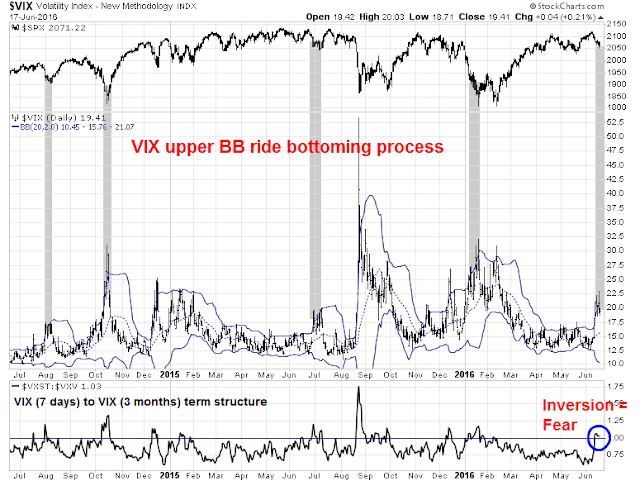 The rally and re-test is consistent with the pattern observed by Rob Hanna at Quantifiable Edges of 5-day declines that remain above their 20-day lows (Day 0 = last Thursday). If history is any guide, then market strength should top out on Monday or Tuesday.

My inner investor remains constructive on stocks. The latest update from Barron’s of insider trading activity shows that this group of “smart investors” are buying again after spending several weeks at a neutral reading. This data point is mildly supportive of the bull case and suggests that, at a minimum, downside risk is limited.

My inner trader took profits and covered his short position, albeit a little early, and he is waiting for an opportune entry point on the long side next week.